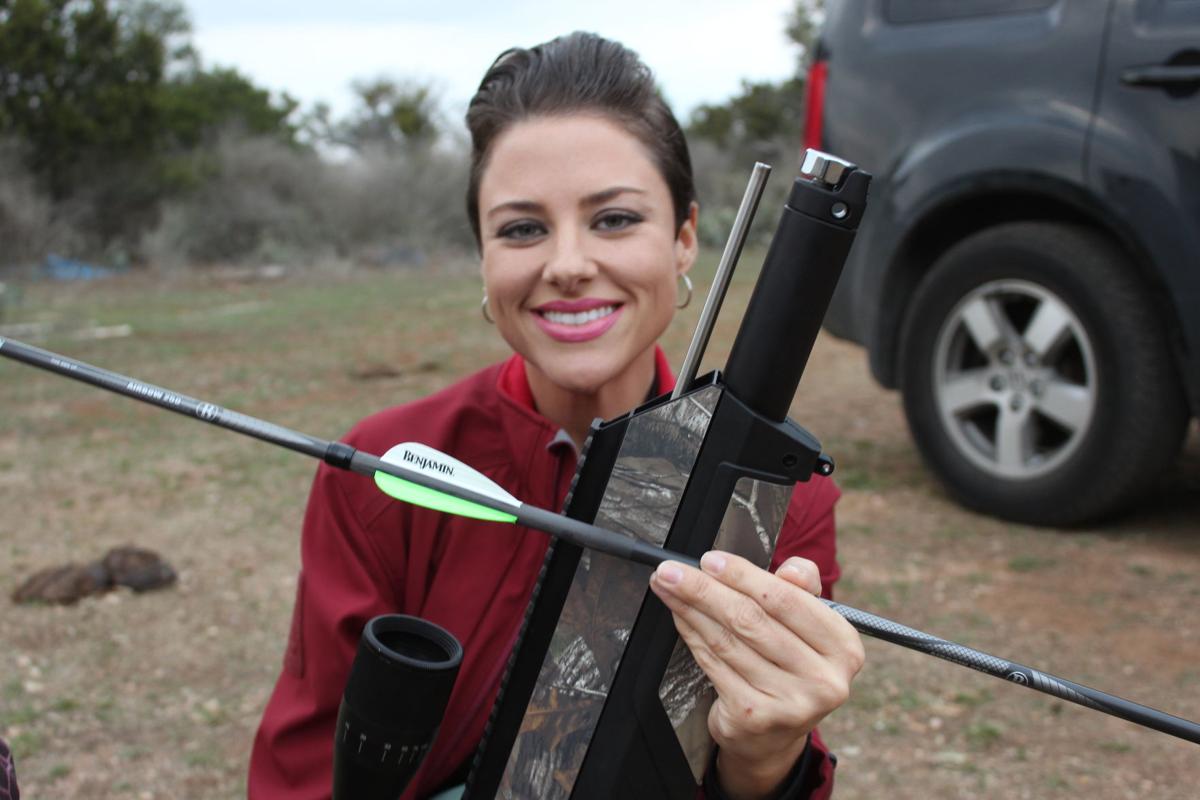 The airbow is unbelievably accurate. Summer Penland had never shot a bow. However, she shot a Robin Hood on her first try.

The airbow is unbelievably accurate. Summer Penland had never shot a bow. However, she shot a Robin Hood on her first try.

I met Bill Olson, editor of Texas Outdoor Journal, at the Dallas Safari Convention & Expo years ago. One thing led to another, and we’ve become friends. I write a monthly column for him. So when he called and asked if I wanted to go on a Texas hog hunt with him, of course the answer was yes.

The plan was to fly into Austin and he’d pick me up at the airport. I have a niece and nephew in Austin so that would work great. I got to meet them for coffee.

I hugged them bye and we took off for the Reveille Ranch near Burnet, Texas. There we met up with Murray and Clint Choate, owners of Slow Glow. Right off I liked them. They were some gung-ho hog hunters. The plan was to grab a bite in town and then head to the ranch and get situated. Those plans were soon thrown out the window and Clint started drawing up a night hog hunt. Forget the group hugs and getting comfortable the first evening.

They explained to us how their product worked. Murray is an inventor and to help his hog hunting addiction be more successful, he invented an LED motion-activated system.

Here’s how it works — it is pointed toward a feeding area. When hogs come in it starts slowly illuminating over a two-minute period. If it fired up right away the hogs would spook, so it lights up slowly so they don’t even know it is getting lighter.

It sounded unique. Now to go test it out. They were sure excited to show it to us. At the first stalk, Clint was to shoot one with his bow. Great, maybe I could get multiple articles on hog hunting with the Benjamin Pioneer airbow, the Mossberg Patriot Revere rifle, archery and pistol hunting. That’d make it a productive albeit busy hunt.

We drove down a pasture road and soon parked and unloaded to begin our stalk. As we came over a rise, you could see the eerie green glow of the Slow Glow at full power. Great, that meant we had hogs on the spot (or it could just be coons, deer or cows).

As we got closer, you could hear hogs grunting, squealing and rooting around. Clint nocked an arrow and his dad ran the camera. I didn’t have very high hopes of getting close enough for a shot because there were four of us. We lined up behind each other and stalked in behind the light.

Oh my gosh, there was a good group of hogs fading in and out of the light. There was at least one good-sized boar. When a little pig would get too close, the boar would root them with his snout and send them flying. They’d squeal and hustle off only to be back in a few seconds sneaking in for another bite of corn.

At 11 paces, we stopped. The boar was in back of a couple of sows. We waited a bit and then a shooting lane cleared. Clint drew back, then another hog moved in the field of shot. After what seemed like an eternity, the lane opened and Clint threaded in an arrow. We could see the illuminated nock zip in and strike home.

At the sound of the bow, snapping hogs squealed and shot off every which way. We walked to where the hogs had been and picked up the arrow. Something was wrong! There was no blood. Upon closer inspection we could see that the expandable broadhead had some hair/fat on it but it had been driven back into the shaft. We finally figured it out. The arrow had hit the hard shoulder plate and bounced off.

Wow! Big boars are as tough as you hear. I made up my mind then that I favored my Wasp broadheads for the airbow. It appeared to me that with the 2-inch wide expandable broadhead that it’s just too likely to hit a bone and deflect or slow/stop it.

The next night, eight-time NHRA Champion (drag racer) Tony Schumacher showed up to hunt with us. We had a great time taking him while Bill and Murray took his girlfriend, Summer Penland, with them on a pistol hog hunt.

Tony was going to use his AR but Clint and I talked him into using my airbow. Tony shot it a few times in camp and got comfortable with it. His girlfriend then shot it freehand and got a Robin Hood. Everyone was impressed with the Pioneer airbow.

Well, we are out of room for this week. Next week, we’ll see how the hunts went.