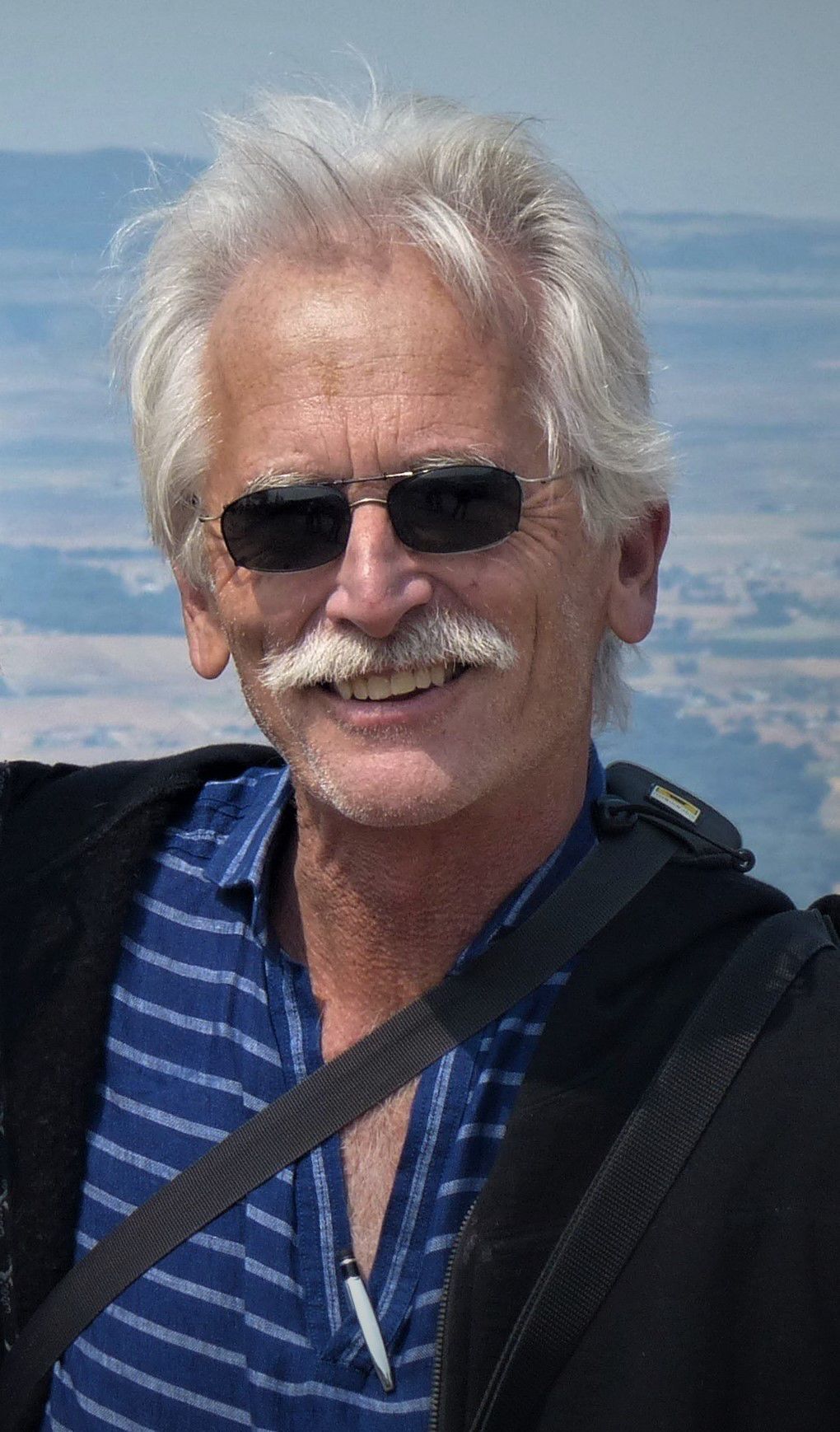 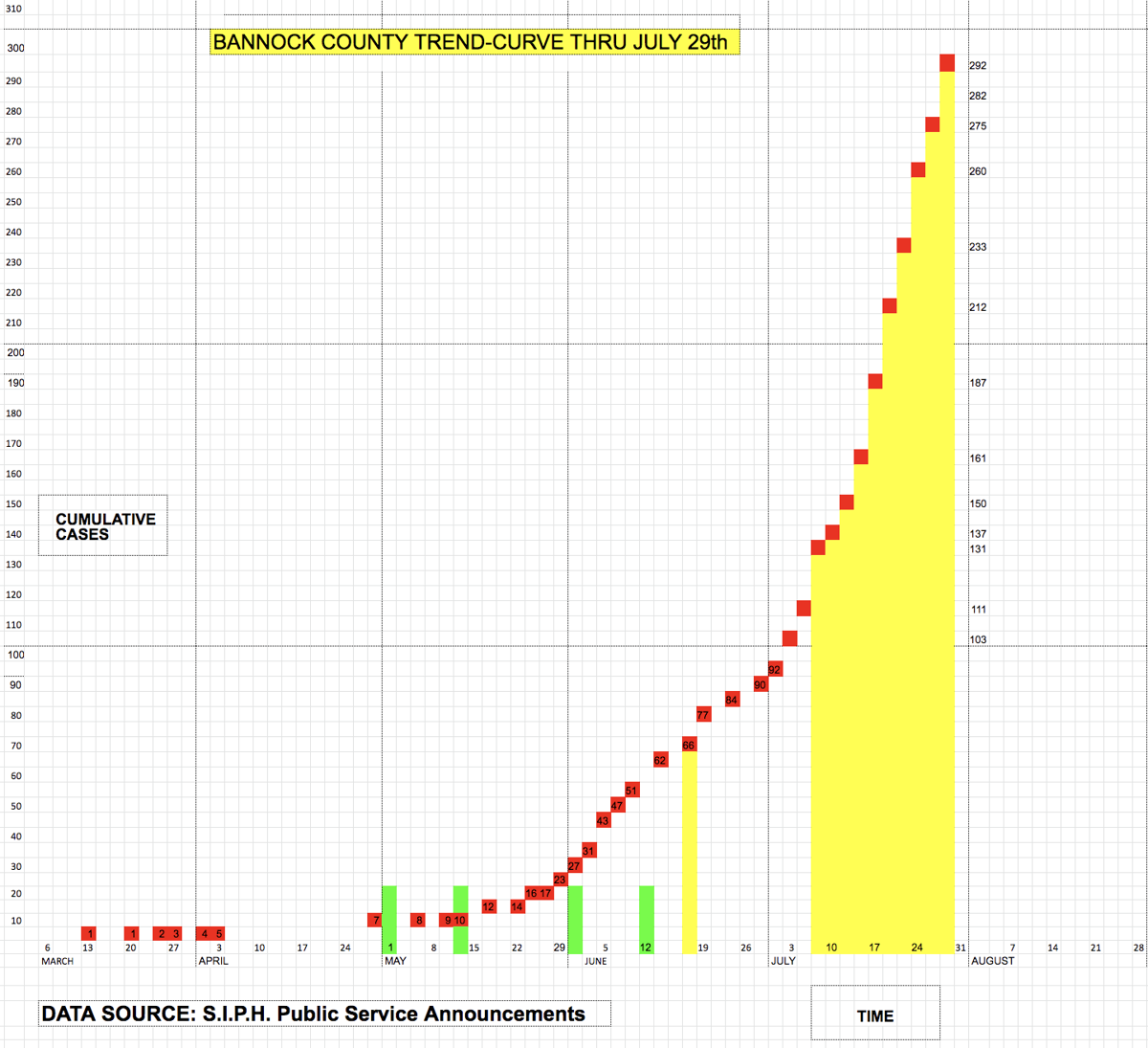 A graph of coronavirus cases in Bannock County from March 1 through July 29. 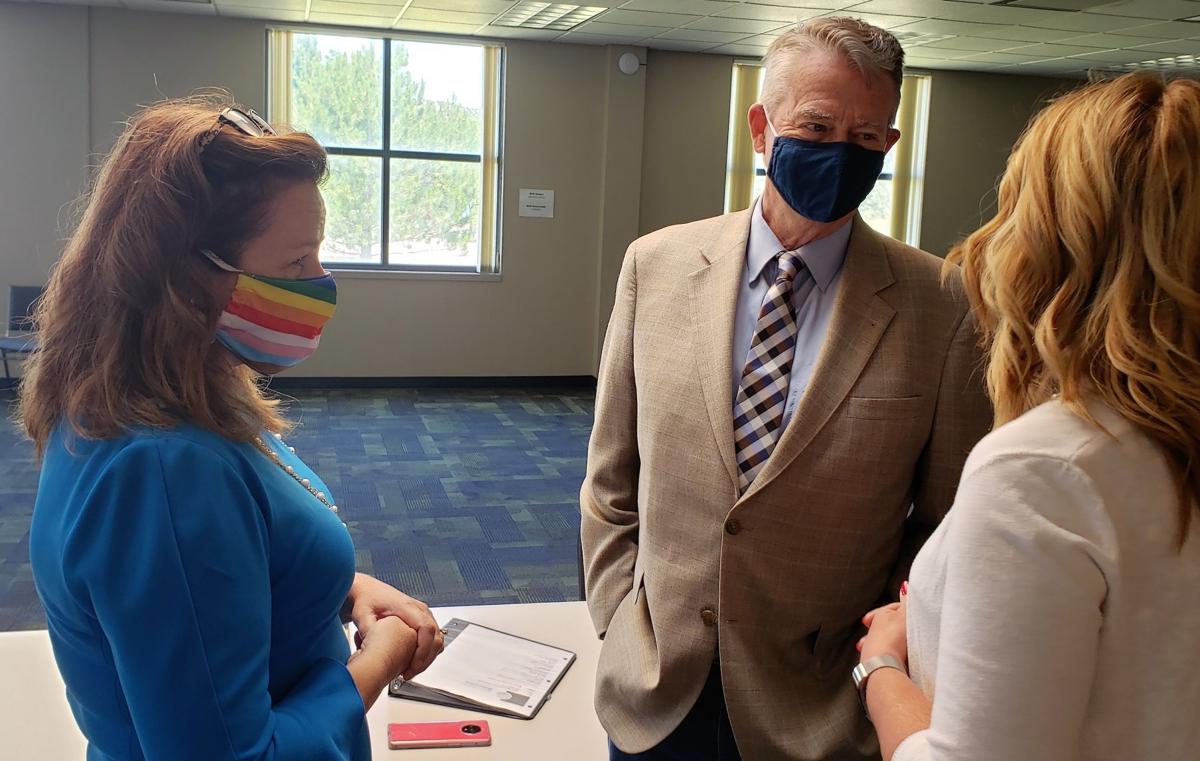 A graph of coronavirus cases in Bannock County from March 1 through July 29.

On April 27, Bannock County had seen seven cases of COVID-19. By June 18, about eight weeks later, there were 74 cases — a tenfold increase. The state of Idaho was entering Stage 4 of the reopening process, and Pocatello Mayor Brian Blad wisely “reminded citizens that Gov. Little’s COVID-19 guidelines for opening up Idaho are still in place.” The slope of the curve in Bannock County was inclining more steeply upwards, as it did throughout the month of June. I compiled a graph with numbers from Southeastern Idaho Public Health Public Service Announcements, and sent it to our mayor and City Council members on about July 2 out of deep concern for the rapidity of the disease onset and the slow response of city and regional leaders to a quickly spreading medical pandemic.

By the time the council met to consider a public health ordinance on July 9, the number of cumulative cases had nearly doubled to 131. The ordinance failed, but the council wisely decided to meet with top medical professionals in the community at their special meeting a week later on July 16, by which time Bannock County had seen 172 cases. The efficacy of masks/respirators/face coverings to curb the spread of the virus was relayed by all, loud and clear. A gentleman from Portneuf Medical Center reported they were OK so far, but that conditions could change “on a dime” or language to that effect. He stated that a month ago they had enough tests, but more recently they’d started to ration their use. The council decided to wait for the Southeastern Idaho Public Health meeting on July 23, offering a general endorsement of the COVID-19 Regional Response Plan process.

At the SIPH board meeting on July 23, three county commissioners on the board — Ernie Moser of Bannock, Whitney Manwaring of Bingham and Robert Swainston of Franklin — blocked a mask requirement from being included in the Regional Response Plan until conditions degenerated to critical risk level, or red.

Other somewhat ominous realities were noted in the meeting. Turnaround time of testing was reported to be from 10 to 14 days. One care facility administrator called testing “worthless” for being too slow. Without rapid test results, two contact tracers who will come on line with SIPH in early August will not be able to conduct essential contact tracing effectively. New technology to increase testing capacity was said to be “months away.” The positivity rate of tests was reported to have been 30 percent in Southeastern Idaho on July 19, roughly twice the statewide average. Hospital capacity was characterized as “tight” here and close to “maxed out” in the Boise metro area. The following day, July 24, Bannock County had seen 260 cases.

With the recent surge in cases, Bannock County likely falls into the yellow, or moderate risk level. The problem is, as presently adopted by SIPH, even if conditions worsen, and cases continue to skyrocket, placing us in the high risk level, or orange, masks/respirators/face coverings still would not be required. At that degree of infestation, monitored metrics would include guarding against outbreaks in hospitals and among first responders, in assisted living facilities, nursing homes and schools, including Idaho State University. By then, we would already be fighting a rear guard action to protect essential workers, vulnerable groups and the general population.

The city of Pocatello needs to adopt the SIPH Regional Response Plan in city ordinance with a face covering requirement in the high risk level. To wait for things to enter critical risk level, when hospital capacity is maxed out and so-called crisis standards of care are implemented is too grim to contemplate. Think triage and people left to die for lack of capacity for treatment. Think Italy. Think New York City. We don’t want or need to see that here.

Our trend in Bannock County is not good. It has gotten steeper as time has slipped away. Never mind flattening the curve; as Mayor Blad told the Idaho State Journal, COVID-19 cases have indeed “shot straight up” and by any metric we should recognize the potential for the death of many hundreds of our citizens. Seven hundred deaths is within the realm of possibility. Gov. Brad Little said, “This is a critical issue. For you to step up and make these decisions, I want to say congratulations.” SIPH remarked on July 24 on the front page of the Regional Response Plan, “It is important to note that local elected officials have the authority to implement their own measures, which can be more restrictive than those included in this plan, to do what they feel is necessary to protect the public health of the residents within their jurisdictions.”

By the time the council next meets Aug. 6, our “monitored” caseload is projected to be at 183 active cases, as they double approximately every two weeks. This will exceed the threshold metric of 176 cases and would place us in the high risk level, monitoring for likely outbreaks in absolutely critical sectors of our society. This reality is approaching us very, very quickly.

In my opinion, this is a time for:

1) A city ordinance requiring business owners, all employees and their customers to wear face coverings when indoors.

2) An adoption of the SIPH framework for the City of Pocatello with restoration of the deleted requirement for face coverings in the high risk level.

The moral authority of law is required in this medical emergency. We don’t take down the speed limit signs even though we know people will drive too fast. We don’t stop making law even though we know criminals will break it. Nor should we burden law enforcement with anything more than incidental enforcement by the power of their presence, unless conditions degenerate. For now at least, this feels like a time for a law with no tangible penalty, except for the moral authority of the law itself, the presence of our beloved law enforcement community among us, and the moral example of those who mask up to protect those around them and the people that they love.