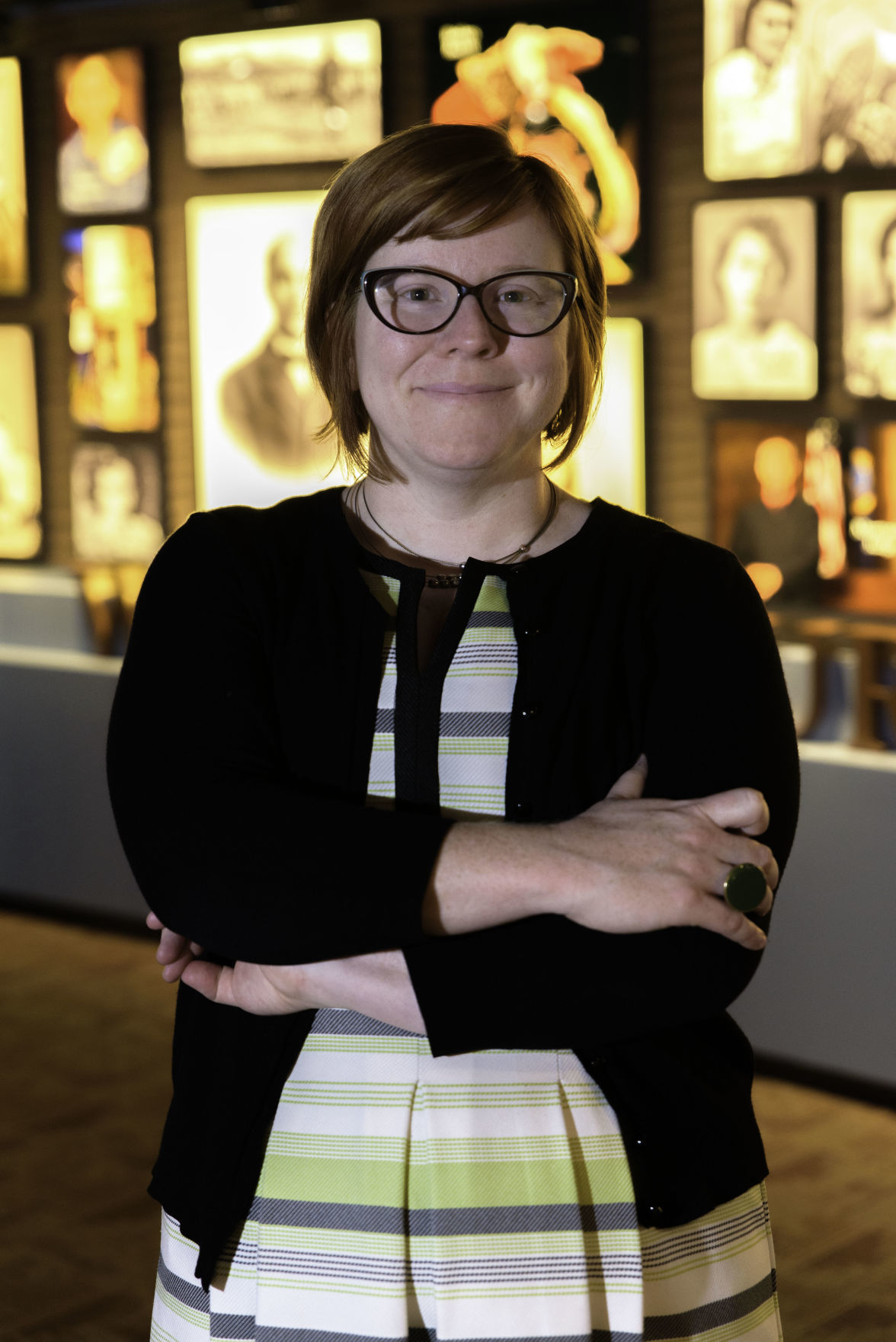 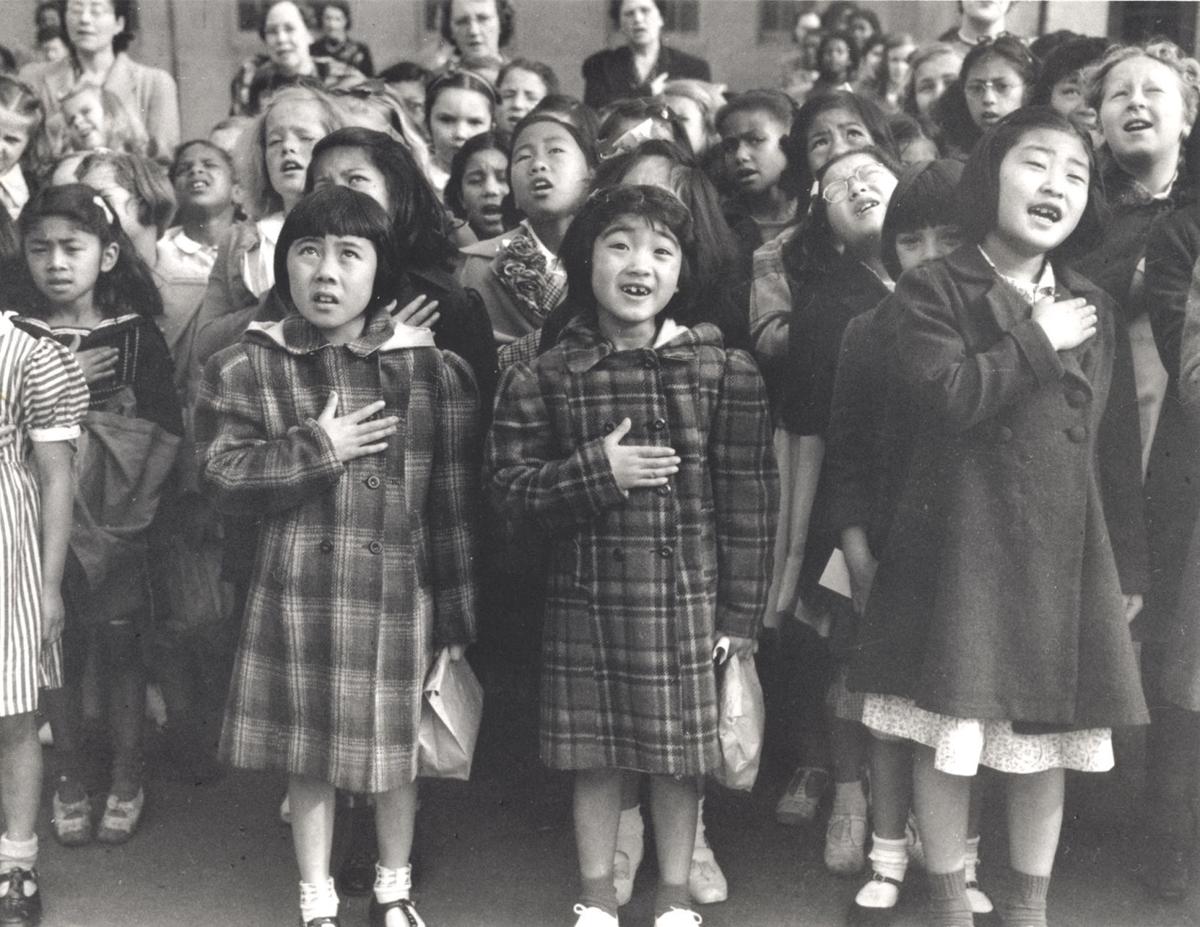 Pledging allegiance to the flag at Raphael Weill Public School in San Francisco in 1942, days before Japanese American citizens were transported to internment camps. 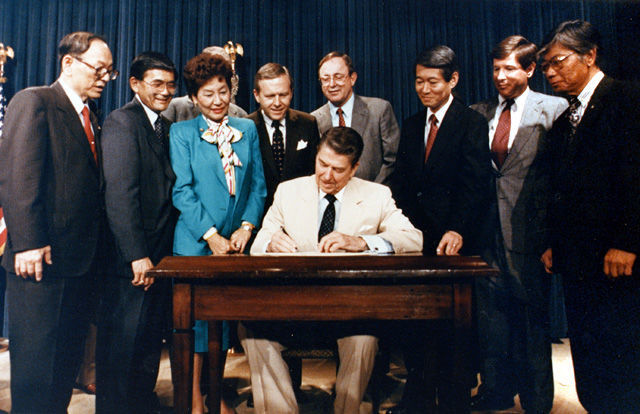 {span}President Ronald Reagan signs the Civil Liberties Act of 1988, providing an apology and $20,000 to the living Japanese Americans who were incarcerated during World War II.{/span}

Pledging allegiance to the flag at Raphael Weill Public School in San Francisco in 1942, days before Japanese American citizens were transported to internment camps.

{span}President Ronald Reagan signs the Civil Liberties Act of 1988, providing an apology and $20,000 to the living Japanese Americans who were incarcerated during World War II.{/span}

The Idaho State Museum is excited to announce its first traveling exhibition of 2020, “Righting a Wrong: Japanese Americans and World War II” from the Smithsonian Institution Traveling Exhibition Service (SITES).

While the state museum develops many exhibitions in-house, traveling exhibitions bring new perspectives and content for our visitors. It is also an opportunity to provide access to artifacts visitors may never have the chance to see on display again.

After identifying potential interests of our visitors through an audience survey and collaborative brainstorming sessions with staff and partners, museum staff applied to be the fourth stop on an eight-city tour of the country for this exhibition. SITES has been sharing the wealth of Smithsonian collections and research programs with millions of people outside Washington, D.C., for more than 65 years. SITES connects Americans to their shared cultural heritage through a wide range of exhibitions about art, science and history, which are shown wherever people live, work and play.

This SITES exhibition traces the story of Japanese American incarceration and the people who survived it.

After Imperial Japan attacked Pearl Harbor on Dec. 7, 1941, and the United States entered a war in Europe and the Pacific, the nation was overcome by shock, anger and fear — a fear exaggerated by long-standing anti-Asian prejudice. In response, President Franklin Roosevelt signed Executive Order 9066.

This order forced 110,000 people of Japanese ancestry to incarceration camps. Japanese Americans lost their freedom and civil rights. Nationally, this decision was supported. The perception was the safety of Americans needed to be secured, and the political climate supported every measure to ensure their definition of safety was upheld.

During the war, 120,000 incarcerated Japanese Americans lived in poor housing conditions, lost their belongings and were stripped of their community and sense of place. This included 13,000 inmates in Idaho at the Minidoka War Relocation Center in Jerome. While this is a national story, the Idaho connection is strong. At its peak, the population of Minidoka was 9,397 people, making the camp Idaho’s seventh largest city during its operation.

Minidoka’s inmates were used as a labor force to help save the crops on nearby farms. The contributions and relationships formed outside the camp with locals impacted the community and helped foster some new opinions on Japanese Americans, contrary to the national sentiment. The community established between Japanese Americans and their peers within the barrack walls helped inmates with the grief of losing their freedom, although the trauma is still here.

In 1943, while incarcerated for their presumed disloyalty based on their race or ethnicity, Japanese Americans were drafted and enlisted in the 100th/442nd Regimental Combat Team (RCT), a segregated unit in the U.S. Army. This regiment became the most decorated unit of its size in American military history. Out of all 10 incarceration camps, Minidoka had the most members in the 442nd RCT. The reality that many fought for the United States for this notion of freedom while their family members remained incarcerated was hard to accept for all.

Although nothing can compare to the events of the past, more than 40 years after World War II ended, the Japanese American community led the nation to confront the actions of the past and the decisions that brought us there. The U.S. Congress formally recognized the rights of Japanese Americans were violated and President Reagan signed the Civil Liberties Act of 1988, which provided an official government apology and restitution to the living Japanese Americans who had been incarcerated during World War II.

This new traveling exhibition from the Smithsonian’s National Museum of American History is significant, and one that can press upon visitors how strong of a legacy this time in our history still has today.

Visitors will experience heart-wrenching personal stories, fascinating documents, personal artifacts, stunning photographs and engaging interactives. Personal items from those who lived in the camps connect audiences on a personal level. A duffel bag used by the Imada family when they were relocated to the Gila River camp in Arizona reflects the restrictions to bring only what could be carried. Takeo Shirasawa’s 1943 high school diploma from the Poston Camp in Arizona exemplifies the experience of thousands of other teens who completed their high school education in camps.

Embracing themes that are as relevant today as they were 75 years ago, the exhibition takes a deep look at immigration, prejudice, civil rights, heroism, and what it means to be an American. The Idaho State Museum is proud to provide this opportunity to all Idahoans and beyond to visit and learn about such a difficult chapter in our nation’s history. It is not easy to confront our challenging past, but we hope by discussing and learning we are better equipped for the future.

Staff at the Idaho State Museum understand the difficulty in interpreting and presenting challenging history and have partnered with Minidoka National Historic Site (NHS) and the Friends of Minidoka to develop programming and prepare staff and volunteers to interpret and engage visitors in the space.

Through the Robert C. Sims Community Education Fund, the Friends of Minidoka will be providing the museum staff and docents with training and the funding needed to secure a bus to take a guided tour of Minidoka in advance of the exhibit opening. This opportunity will give them the tools and knowledge necessary to best serve visitors.

The museum’s partnership with Minidoka NHS and the Friends of Minidoka have afforded the opportunity to develop an exhibition to supplement Righting a Wrong that highlights the Minidoka story and places it within the national context. It will include local artifacts and images that represent stories specifically of those incarcerated in Idaho. This exhibit includes more than 40 photographs and over 15 artifacts on display. Each piece represents a personal experience and connection to Minidoka, including: homemade art, a child’s toy, meal punch cards, and a piece of collected raw greasewood.

The museum is also launching new and engaging opportunities for educators in the Treasure Valley and throughout the rest of the state. A new Traveling Trunk about the Minidoka incarceration experience will launch with the exhibition on Jan. 25. These trunks extend the museum experience into classrooms all over the state. The trunk contains primary sources including document reproductions and educational artifacts for students to engage with along with three hours of activities for teachers to facilitate with students. Thanks to our partnership with the National Park Service, the Minidoka Traveling Trunk will be free to rent in 2020 for all Idaho elementary level teachers.

For educators within driving distance, the museum will host a limited time field trip workshop for grades six to 12 between Jan. 25 and April 5. The workshop will explore the question: “Why do rights need to be protected?” Teams of students will look at several different primary sources regarding Japanese American incarceration during World War II to build a collective timeline and better understand the events leading up to these major decisions and their repercussions in American history.

On Feb. 19 from 6 to 8 p.m., the public is invited to join Minidoka National Historic Site at the Idaho State Museum for a film screening on the anniversary of the signing of Executive Order 9066. The screening will be of the National Park Service film that provides an overview of the impacts and stories of Minidoka and features the experiences of those incarcerated. This will be followed by a question-and-answer session with Minidoka National Historic Site staff, Friends of Minidoka and special guests. This event is free to the public, and opportunities to explore the exhibition will also be provided.

Righting a Wrong opens to the public on Jan. 25. The Idaho State Museum is located within Julia Davis Park in downtown Boise and is open seven days a week: from 10 a.m. to 5 p.m. Monday through Saturday and from noon to 5 p.m. Sunday. For more information on admission pricing and group tours, visit history.idaho.gov/RAW.

Liz Hobson is the museum administrator for the Idaho State Museum in Boise. She oversees the daily operations of the museum and the planning and development of programming and exhibits. Hobson has over 14 years of experience at museums, historic sites and nonprofits across the country. She has a master’s degree in public history from Middle Tennessee State University and a bachelor’s degree in history from California University of Pennsylvania. She also serves on the American Association for State and Local History Awards Committee.