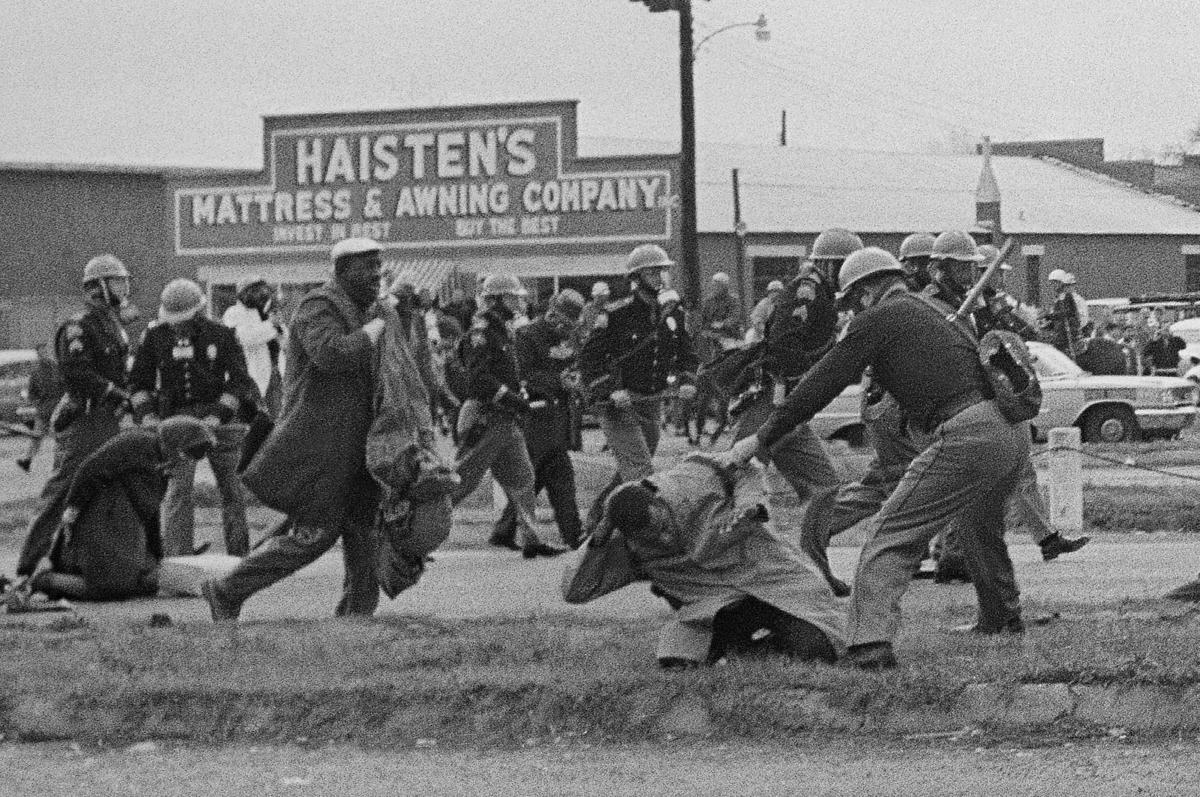 John Lewis, foreground, is beaten by a state trooper in Selma, Alabama, on March 7, 1965. The future congressman suffered a fractured skull.

John Lewis, foreground, is beaten by a state trooper in Selma, Alabama, on March 7, 1965. The future congressman suffered a fractured skull.

”He never threw a brick. He never lit a match.” — Rep. James Clyburn on John Lewis

”Ordinary people with extraordinary vision can redeem the soul of America by getting in what I call good trouble, necessary trouble.” — John Lewis

”I want to thank the BLM protesters who decried the white supremacists once they were identified.” — Richmond’s Police Chief Gerald Smith

Let me begin with these words from Martin Luther King Jr.’s acceptance speech for his 1964 Nobel Peace Prize. He told his audience in Oslo that the use of violence “destroys community and makes brotherhood impossible. It leaves society in monologue rather than dialogue.”

In 1965, inspired by Mahatma Gandhi, King counseled that, before any protest march, those involved had to “undergo self-purification.” They would also have to take Gandhi’s vows: “Are you able to accept blows without retaliating?” “Are you able to endure the ordeal of jail?”

On a beautiful Sunday afternoon, March 7, 1965, peaceful protestors, led by the late John Lewis, attempted to cross the Edmund Pettus Bridge in Selma, Alabama. Pettus was a Confederate army officer, senator, and Grand Dragon of the Klu Klux Klan.

There is now a petition to rename the bridge after Lewis, and Caroline Randall Williams, a Pettus descendant and writer-in-residence at Vanderbilt University, supports that move. She warns us, however, that after that symbolic gesture, we should all get to work eliminating racial injustices.

The 600 marchers, well dressed and walking silently for the cause of voting rights, were stopped at the bridge by local police (some mounted on horses) and Alabama state troopers. Well trained as ordained Baptist minister in spiritual “self-purification,” Lewis proposed that they all kneel and pray. Before the word got back to the other protestors, the police ran roughshod over them, just as armed federal agents did in Portland just recently.

In the ensuing melee, 90 marchers were injured, some seriously, including Lewis with a fractured skull. Even though Lewis begged his attacker to stop, the state trooper kept hitting him with his club. In his autobiography, Lewis, who survived many previous police beatings, wrote: “This is it. People are going to die here; I’m going to die here.”

Even though angry white bystanders attacked the reporters and cameramen present at the Pettus Bridge, video of the attack was released to the national media. There was national outrage about yet another example of the brutality and murder against blacks before and after the march until this day. A long list of killings, including Jimmie Lee Jackson, Emmett Till and four girls at a Birmingham church, were fresh in the marchers’ minds.

Just days before this “Bloody Sunday,” Martin Luther King Jr. was in personal dialogue with then President Lyndon Johnson. They were discussing the Voting Rights Act that was signed into law on Aug. 6, 1965. In stark contrast to our current president, Johnson federalized national guard troops to protect protestors as they marched from Selma to Montgomery, arriving on March 25, 1965.

John Lewis remembered the marchers at the Pettus Bridge as “more disciplined, more somber and subdued, almost like a funeral procession.”

The previous 1963 March on Washington involved about 250,000 people and there was not a single arrest. The 23-year-old Lewis spoke just before King, and he vowed to “splinter the segregated South into a thousand pieces and put them back together in the image of God and democracy.” Would that be so today.

Lewis was once the chair of the Student Non-Violent Coordinating Committee, but in 1966 he was removed because he was considered too moderate. H. Rap Brown, one of the leaders who followed Lewis, was notorious for the chant “Burn Baby Burn” in support of the 1967 riots.

Congressman James Clyburn claims that this turn to violence “destroyed our movement,” but, more accurately, it impeded it. Lewis had to admit that “the road to nonviolence had essentially run out.” The backlash caused a split in the Democratic Party and racist George Wallace won five southern states and paved the way for Richard Nixon’s victory in 1968.

On July 11, Donavan La Bella, a 26-year-old non-violent leader of the Portland protests, was shot in the head by an unidentified U.S. marshal. The “non-lethal” bullet left him hospitalized where he is in stable condition but suffering from migraine headaches. La Bella will require facial reconstruction surgery.

On July 18, Navy veteran Christopher David decided to join the Portland protests. Standing peacefully with a Navy sweater and cap, David was attacked by federal agents, who had formed a phalanx and began clubbing, tear gassing, and pepper spraying protestors indiscriminately. David will undergo reconstructive surgery in one hand.

These actions have brought critical response even from conservative legislators. Rand Paul contends, rightly, that federal intervention only escalated the conflict. In a memo obtained by the press, the Department of Homeland Security confessed that their forces were not trained for riot and crowd control.

Portland mayor Ted Wheeler declared that the presence of federal agents “is actually leading to more violence and more vandalism. They’re not wanted here. We haven’t asked them here. In fact, we want them to leave.” On July 28, an agreement was reached between DHS and Oregon’s governor, and state troopers will now take over as federal agents are being phased out.

A problem with ‘non-centralized’ protests

One Portland protester describes the events as “organic and non-centralized,” and that, unfortunately, has allowed some to set fires, otherwise destroy property and, in a few instances, attack police and counter-protesters.

One Portland resident declared to those assembled: “This is not peaceful. This is a war against the federal government. This is what Trump wants. He wants to label Black Lives Matter a terrorist organization.”

Most violence from the right, not antifa

Seth Jones from the Center for Strategic and International Studies has reviewed 14,000 arrests in 140 cities, and he has concluded that “most of the violence was committed by local hooligans, sometimes gangs, sometimes just individuals that are trying to take advantage of an opportunity.” Very few of these agitators come from outside their own cities.

Of the 80 federal charges that have been brought during the protests, no person identified with the amorphous group antifa was among them. The FBI reported that it found “no intel indicating antifa involvement” in the May 31 protests in Washington, D.C.

Trump has claimed that all the violence at the protests have been committed by antifa and left-wing hooligans. When his administration was asked for evidence of this conspiracy, no response was forthcoming.

As Washington Post fact checkers gave Trump four Pinocchios for this falsehood, they stated: “There has not yet been a single confirmed case in which someone who self-identifies as antifa led violent acts at any of the protests across the country.”

Three men associated the racist “boogaloo” movement were arrested by federal marshals for a plot to bomb protesters in Las Vegas. The “Boogaloo Bois” have also participated in anti-police violence. One was an Air Force sergeant who shot two federal agents (one fatally) in Oakland, California. Many others of this ilk have also been arrested.

Donald Trump is running a “law and order” campaign much like Nixon’s in 1968, but three major polls show that nearly two-thirds support the protests despite the scattered violence. I’m convinced that race baiting will not work this time.

I’m also confident that ex-president Trump will not attend the re-dedication of the John Lewis Bridge in Selma, but former presidents Bill Clinton, George W. Bush and Barack Obama and newly elected President Joe Biden will definitely be there.