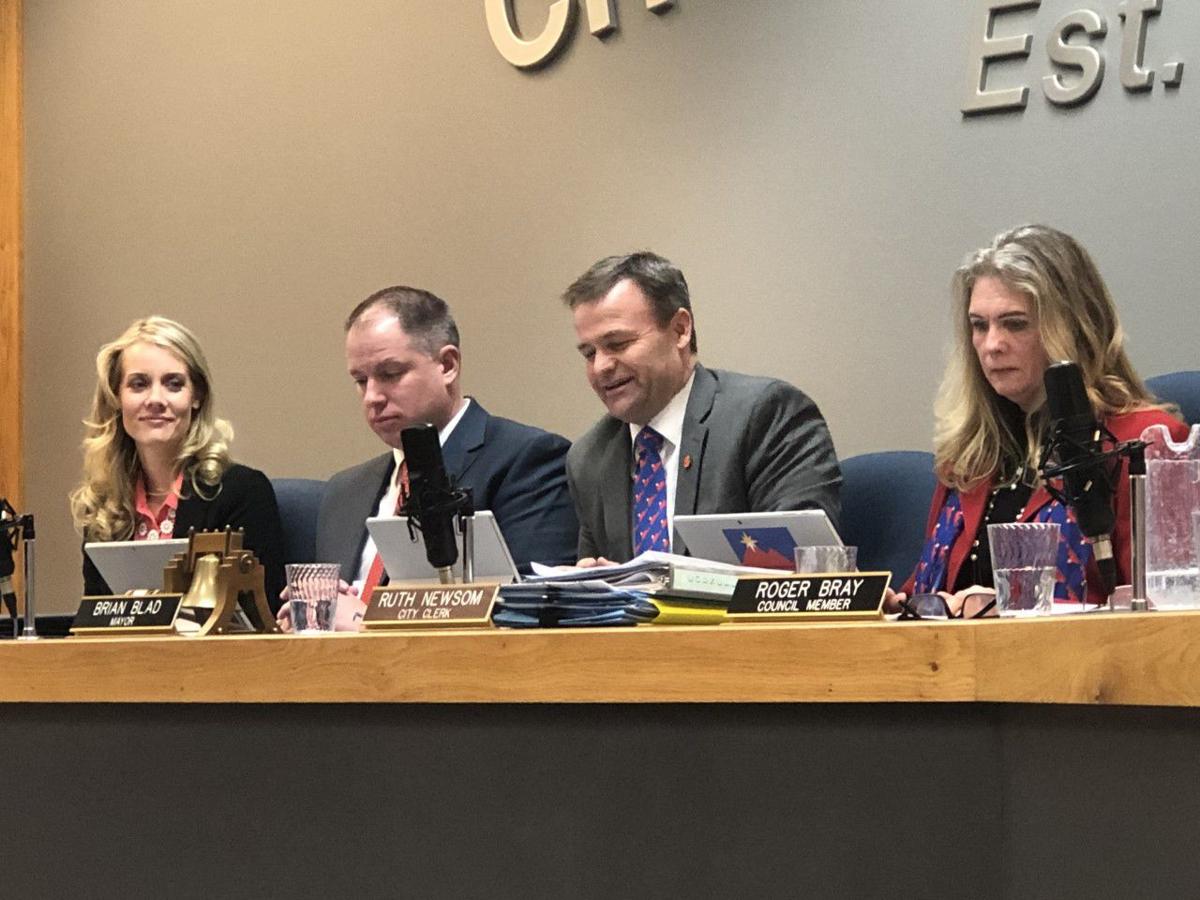 Pocatello Mayor Brian Blad, second from right, gives the annual State of the City address at City Hall on Thursday. 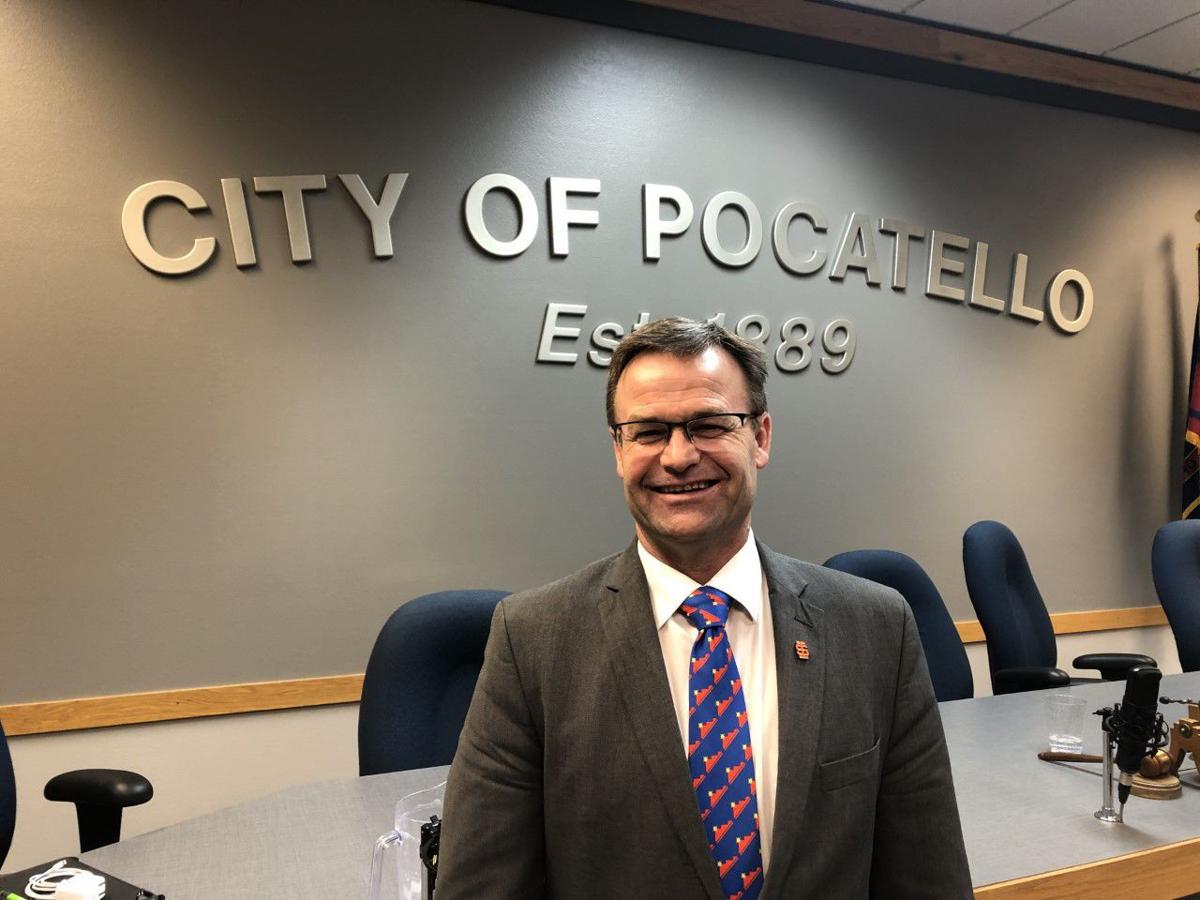 Pocatello Mayor Brian Blad is pictured at City Hall after giving the annual State of the City address on Thursday.

Pocatello Mayor Brian Blad, second from right, gives the annual State of the City address at City Hall on Thursday.

Pocatello Mayor Brian Blad is pictured at City Hall after giving the annual State of the City address on Thursday.

POCATELLO — New construction and continued success in economic development was once again a central focus for the Gate City in 2019, yet Pocatello Mayor Brian Blad is expecting even better results in 2020.

Blad, during his annual State of the City address at City Hall on Thursday, highlighted the construction of the Northgate Interchange, the progress being made to make the Portneuf River recreatable, and, along with other major accomplishments and goals of the city’s many departments, spoke about the success of the newly created Fleet Services Department.

“2019 was the first full year of operation for the new Fleet Services Department, and in July, an open house was held at the Public Works Annex located on Garrett Way,” Blad said. “The department centralizes vehicle maintenance for the Street Operations and Sanitation Departments as well as departments located at City Hall.”

Creating the fleet department and relocating two existing city departments — sanitation and street operations — to the former Western States Cat building at 2405 Garrett Way maximized efficiencies and allowed the city to be a better steward of taxpayer dollars, Blad said.

“The Street Operations Department treated more than 30 miles of Pocatello’s roads during the year, bringing its five-year total to just over 175 miles,” Blad said. “The repairs lead to the city’s Pavement Condition Index score ticking up to 77.1.”

In addition to Blad’s address, the city held investiture ceremonies for two new and one existing City Council members. Claudia Ortega, who led recall efforts against Bannock County officials over last year’s county property reassessments, and Christine Stevens, a local political activist and retired school principal, are new to the council in 2020. Local pastor Roger Bray, an incumbent member of the Council, was also sworn in.

For the first time in decades, Gate City area residents can now float sections of the Portneuf River south of Pocatello, as progress with the city’s Portneuf River Vision plugs along, Blad said.

“2019 saw the Science and Environment Division host the first-ever Poky Portneuf Paddle,” Blad said. “The event drew more than 1,000 people to float the Portneuf River on their tubes, kayaks, canoes or stand-up paddleboards from the Edson Fichter Nature Area or Taysom Rotary Park to Centennial Park. The division will also continue its work on the Portneuf River Vision by improving river put-ins and additional clean-up work.”

Blad also spoke out about a project that the Idaho Transportation Department didn’t have plans to complete until at least 2033, the Northgate Interchange, that is now fully built and operational. The nearly $31 million dollar project took just three years to come to fruition.

“(In 2019) we also celebrated the opening of the Northgate Interchange,” Blad said. “It is the very first public-private partnership of its kind in the state of Idaho. The Idaho Transportation Department, city of Pocatello, city of Chubbuck, Bannock County, Pocatello Development Authority and private development companies came together to plan, fund and implement this much needed transportation route.”

To close his speech, Blad talked about the upcoming 2020 census, encouraging all Gate City residents to participate.

“In 2020, you as citizens will have the chance to help our community receive more than $2,000 per person and all it will take is just 10 minutes of your time,” Blad said. “Your responses to the census help determine funding for things like schools, road and highway construction, the Supplemental Nutrition Assistance Program, Idaho’s Small Business Development Centers, Pocatello Regional Transit and more. All told, more than 50 federal programs are funded by your answers to the census.”

Blad continued, “But that’s not all the census helps with. The population and demographic data you provide helps fuel economic development. You’ll have three ways to respond to the census in April. New for 2020, you can respond online in addition to mail or by phone. It’s my hope that when you see your census form arrive, it doesn’t cause you to think, ‘Just one more thing I have to do.’ But view it as a chance to help your community get the funding it needs to prosper into the future.”

With 2019 in the books, Blad and the city of Pocatello is looking forward to an even more successful 2020, he said.

”2020 is going to be just as successful, if no more successful than 2019,” Blad said. “As I look to the future, I see a ton of opportunities for the city of Pocatello and it’s going to be a ton of fun to see it all happen.”