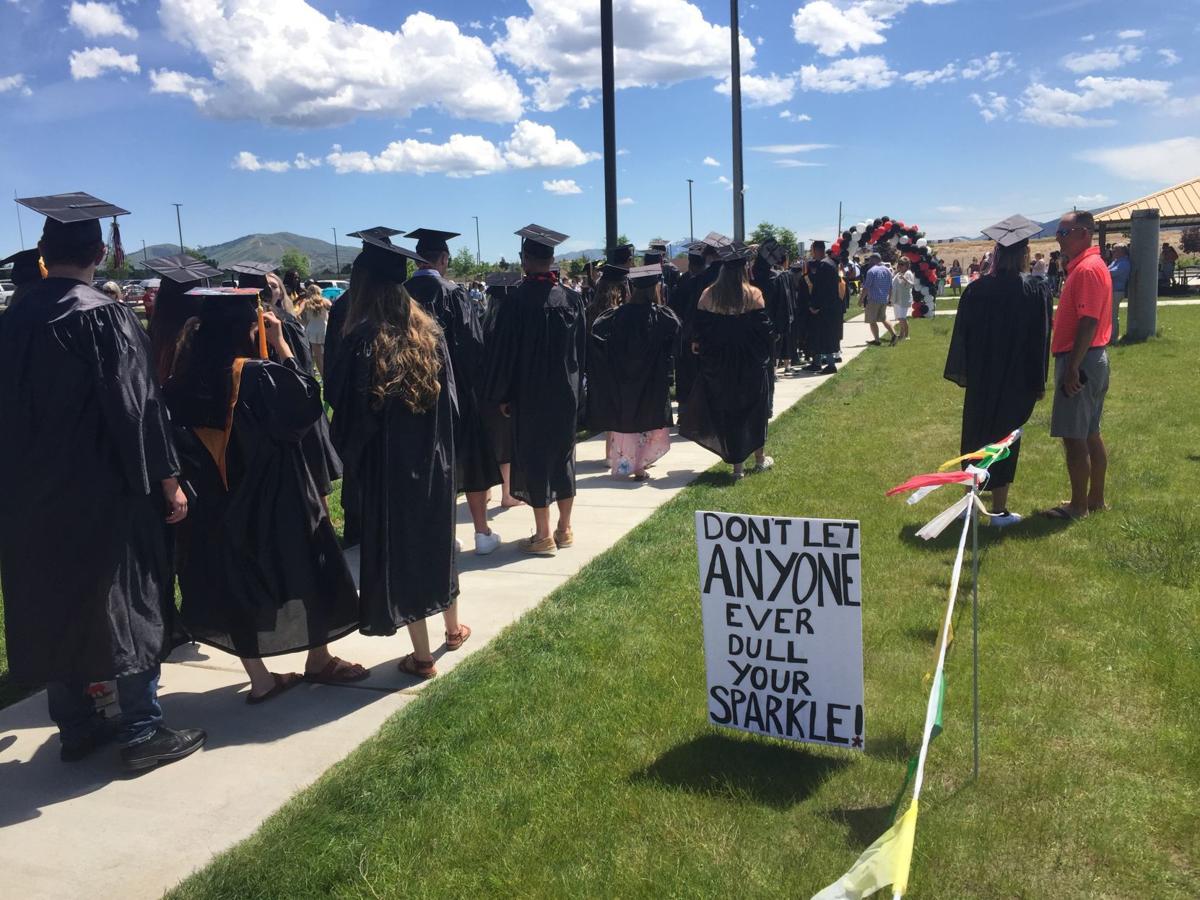 Highland High School graduates march Friday afternoon in an unofficial commencement ceremony at the Portneuf Wellness Complex that was not sanctioned by the school district but was organized by parents to give them a more traditional experience amid the COVID-19 pandemic. The event took place even though the county denied a required permit. 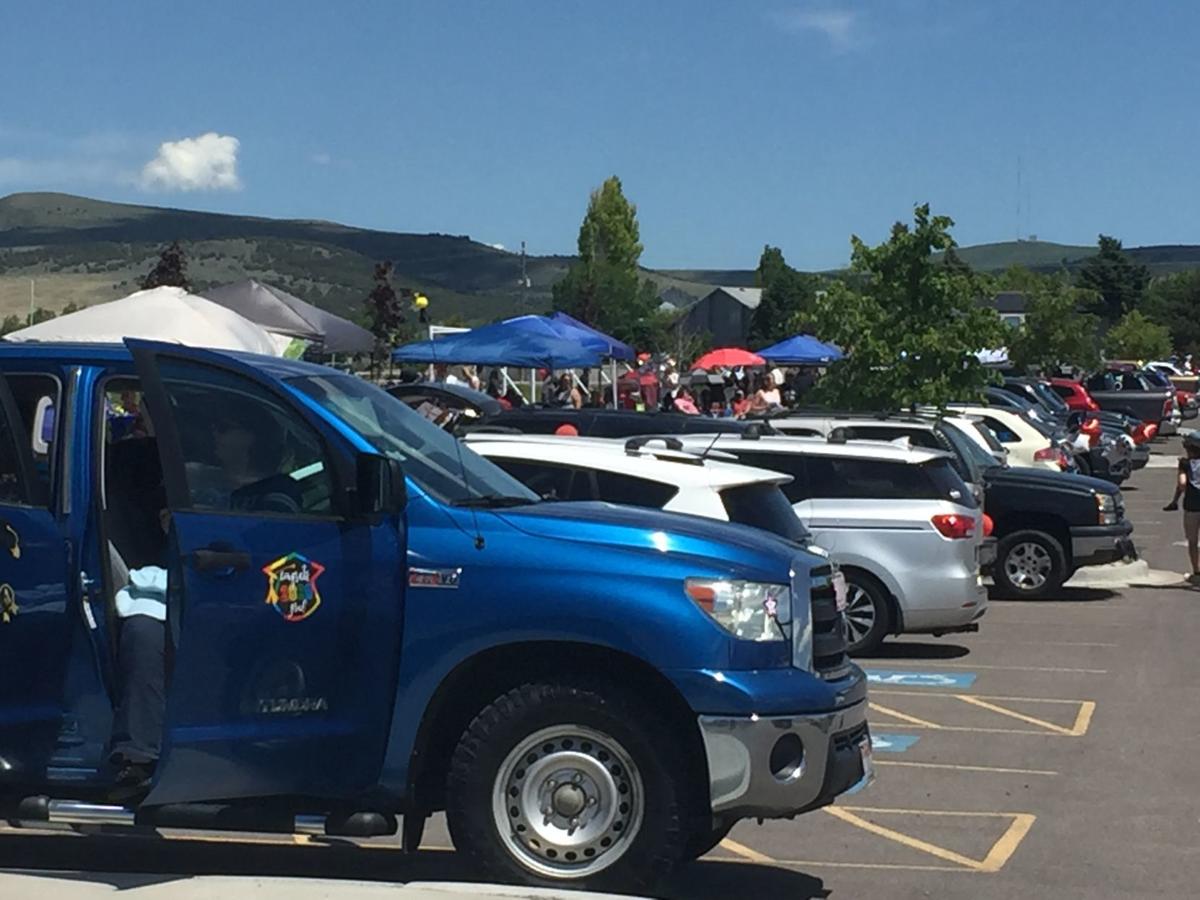 The Portneuf Wellness Complex was bustling Friday afternoon during a Highland High School party hosted by parents for graduates prior to their official ceremony at the high school. 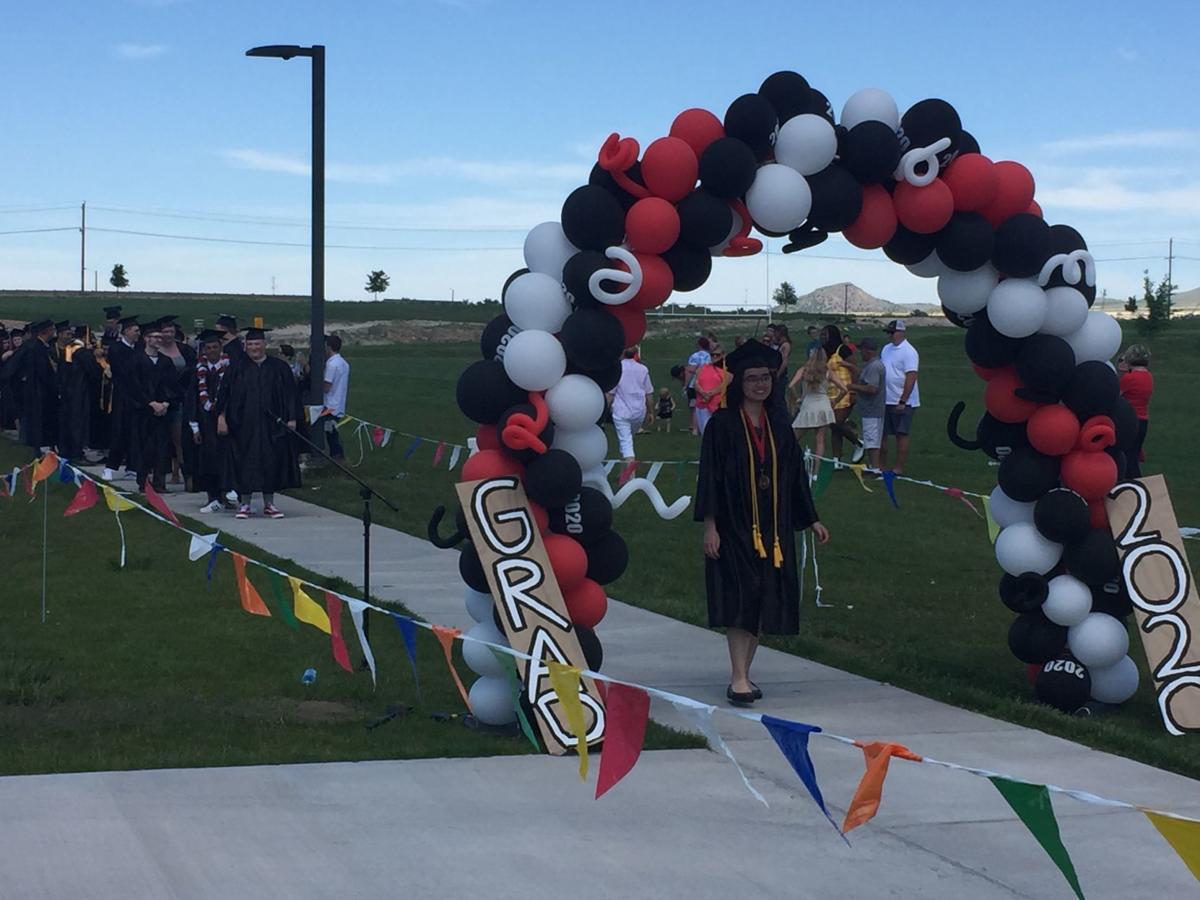 A Highland High School student marches through a balloon archway during an unsanctioned graduation party hosted Friday afternoon at the Portneuf Wellness Complex.

Highland High School graduates march Friday afternoon in an unofficial commencement ceremony at the Portneuf Wellness Complex that was not sanctioned by the school district but was organized by parents to give them a more traditional experience amid the COVID-19 pandemic. The event took place even though the county denied a required permit.

The Portneuf Wellness Complex was bustling Friday afternoon during a Highland High School party hosted by parents for graduates prior to their official ceremony at the high school.

A Highland High School student marches through a balloon archway during an unsanctioned graduation party hosted Friday afternoon at the Portneuf Wellness Complex.

POCATELLO — Many graduating Highland High School seniors and their supporters packed the Portneuf Wellness Complex on Friday afternoon for an unsanctioned commencement celebration where the coronavirus didn’t infringe upon the pomp and circumstance.

Though the director of the county-owned complex denied the parents who organized the bash the required permit on Tuesday, the event, nonetheless, went forward and drew hundreds of people of all ages. Few at the complex wore face masks — as health officials recommend to prevent the spread of COVID-19 — while they honored members of the Class of 2020.

The party lasted a little more than an hour before participants folded up their tents and awnings, put snacks back in their coolers and drove a couple of blocks to the official Pocatello-Chubbuck School District 25 ceremony, which started at 3 p.m.

McDougall said people are welcome to be in city parks and use open pavilions without a reservation, though the city is encouraging the public to limit gatherings to fewer than 50 people, in compliance with the governor’s order.

The Journal has also heard reports of a local business recently hosting a prom for District 25 students, who previously had their school-sponsored dances canceled due to COVID-19.

The district issued a press release Monday, emphasizing it didn’t condone the events hosted away from the schools and expressing pride in those who made the official graduation motor processions successful. The district noted that it planned its motor processions with the support of city and local health department staff to be consistent with the governor’s reboundidaho.gov plan.

“Each high school’s administration and staff worked tirelessly to ensure that their celebrations were high-energy, creative and personalized both to their graduates and their school cultures,” the district’s press release stated. “No other graduation events or activities that transpired were sanctioned by or within the authority of the Pocatello-Chubbuck School District 25 to approve or deny.”

At Highland’s unauthorized celebration at the Wellness Complex, each graduate got to march through a balloon archway, donning a cap and gown, while people cheered as their names were read over a loud speaker. The parking lot bustled, music played and there was standing room only in the pavilion near the walkway where the graduates made their procession.

For seniors Kody Wright and Evan Price, the party at the complex salvaged a last hurrah before they work all summer and then each go on a mission with The Church of Jesus Christ of Latter-day Saints.

“I love just walking with everyone, and being clapped for is nice,” Wright said of the makeshift graduation march at the complex.

Price said he appreciates both the work the district put into the parade and the party at the complex organized by parents, which provided him the chance to celebrate a milestone with a broader segment of the community.

His mother, Alex Price, considers this year’s festivities to be an upgrade over customary graduation traditions.

“I like this a lot more than the actual sitting in a gym in a closed environment where they have to be quiet and listening to speakers,” she said. “It’s more of a celebration.”

As of Monday night, Bannock County had 28 confirmed cases of COVID-19, with its first death reported on Monday morning. Statewide, 2,906 cases have been reported, with 83 cases resulting in death.

Watching his daughter march at the complex, Lyn Yost said he felt safe from COVID-19 being at an outdoor celebration.

“We’re out here enjoying the sun and hopefully trying to be safe,” Yost said, admitting he was surprised by the large turnout. “I think it’s great. I think I’d rather do this than listen to some speeches that I really don’t want to listen to.”

Local public health officials, however, fear the community will set itself on a path towards more widespread disease transmission if people feel comfortable flaunting the rules and hosting large-scale gatherings without taking precautions.

“Our perspective is the school district worked very hard to come up with a graduation celebration that was safe, and we think it’s unfortunate people chose to disregard that,” said Southeastern Idaho Public Health Director Maggie Mann.

Mann, who learned of the issue during a call with the county’s elected officials Friday morning, agrees the risk of transmission was lowered because the party was hosted outdoors. But she emphasized that the governor, the Centers for Disease Control and Prevention and other entities have made COVID-19 recommendations for good reason.

“We all have a role to play in keeping our community healthy,” Mann said.

“It’s not according to the governor’s order. It’s not what public health wants. This is not the way to prevent the spread of the coronavirus, plain and simple,” Solbrig said. “People insisting on their own rights, or in this case their experience with graduation outweighs public health, to me is selfish.”

Had the county been given more advance notice, Commissioner Terrel Tovey believes it’s likely his board would have found a way to work with the parents on hosting a graduation event at the complex.

“I was disappointed with some of the self entitlement that we can do this and we don’t even need to talk to people,” Tovey said. “I think as a commission, probably it is disconcerting that people can decide to completely blow the rules out of the water because they don’t have time to follow them.”

Coronavirus concerns aside, Tovey said the facility’s director denied the permit primarily because there was insufficient time to plan for safety accommodations, implement traffic control, bring in portable toilets and to make arrangements necessary for hosting any large event.

He’s concerned that several participants were erroneously led to believe the county condoned the effort. Tovey is also troubled that the party was apparently held without any liability insurance, which is a requirement of groups that book the facility.

Had the event been approved through proper channels, Tovey said usage fees could have been as much as $4,500, though the county is often willing to waive fees for a good cause.

A lone Bannock County Sheriff’s deputy drove through the complex parking lot during the celebration but didn’t stop. Tovey explained he chose not to break up the party for fear that doing so could have elevated the safety hazard and would have put the deputies in a difficult position.

“We want to make sure people are safe and this isn’t just a COVID thing; it’s a general safety thing,” Tovey said, adding he supports the right of people to assemble in a public place.

Tovey is glad the Highland graduates had the experience, but he believes it was unfair to families from other area schools who didn’t get to attend.

Prior to approving an event amid the COVID-19 crisis, Tovey said the county also asks organizers to coordinate with Southeastern Idaho Public Health to make certain the governor’s safety policies are followed.

In the case of the Highland party, Tovey said the county would have preferred to have kept the public off of soccer fields that recently underwent $6,000 in maintenance. Furthermore, he said schedules for mowing, irrigation and weed treatment were disrupted.

“I would call that (party) the best senior prank ever, but I don’t think it counts because it was orchestrated by parents and not by the seniors,” Tovey said.