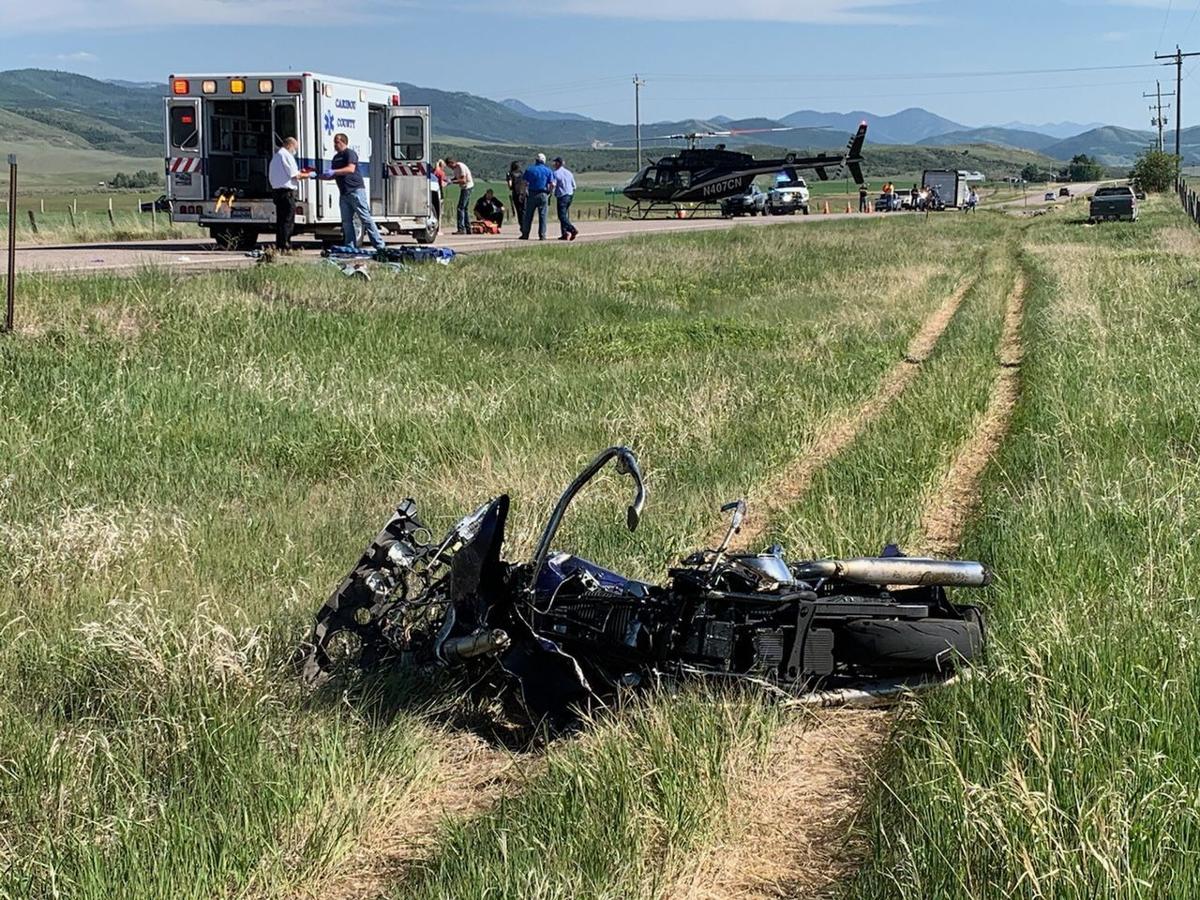 The scene of Sunday’s crash on Highway 34 near Grace that left a motorcyclist dead. 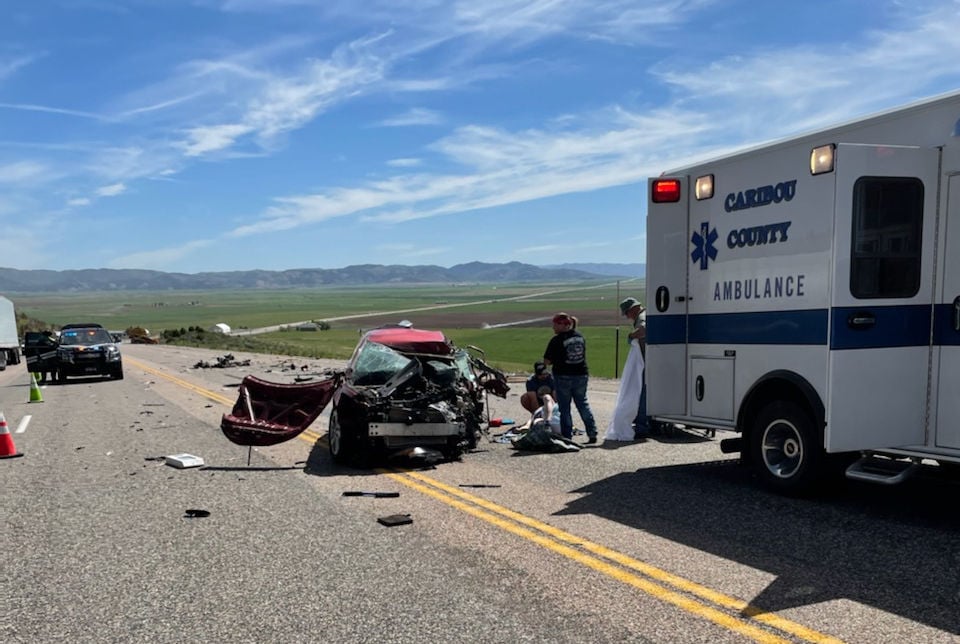 The scene of Saturday morning's crash on Highway 30 in the Fish Creek Summit area. 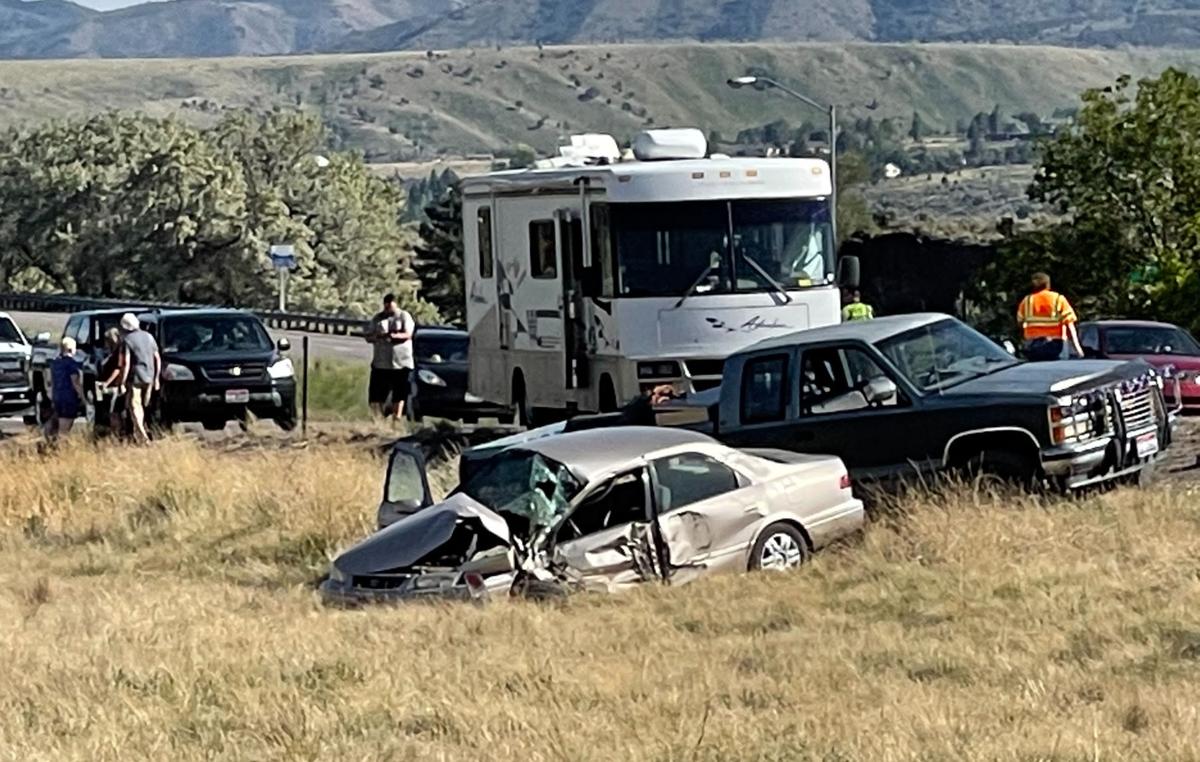 The scene of Sunday's chain-reaction crashes on Interstate 15 in Pocatello.

Idaho State Police and other East Idaho law enforcement agencies were inundated with reported vehicle wrecks over the weekend, which continued with another injury accident in Inkom on Monday morning.

Three people died and several others were injured in the East Idaho accidents this past weekend.

State police responded to a single vehicle crash on Interstate 15 at milepost 57 near Inkom around 10:20 a.m. Monday, state police said.

Valerie Woolsey, 55, of Pocatello, was driving northbound in a 2013 Audi Q5 when she attempted a lane change and went off the right shoulder where the vehicle overturned, police said.

Woolsey, who was wearing a seatbelt at the time of the crash, was transported via ground ambulance to Portneuf Medical Center in Pocatello.

The right lane was blocked by emergency vehicles for approximately 80 minutes minutes while crews worked to clear the scene.

A male juvenile was injured on Sunday evening in a series of related chain-reaction crashes involving several vehicles that partially blocked Interstate 15 in Pocatello..

Idaho State Police said the male juvenile driving a 2001 Toyota Camry sedan attempted to merge onto northbound traffic on Interstate 15 at the South Fifth Avenue on-ramp around 5:11 p.m. when he left the roadway, overcorrected to get back onto the freeway and struck a northbound tractor-trailer driven by Viktor Danchuk, 45, of Gresham, Oregon.

The male juvenile was transported via Pocatello Fire Department ambulance to Portneuf Medical Center for treatment of injuries suffered in the crash. His name and condition have not been released. No one else was injured.

The wrecks temporarily shut down both Interstate 15 northbound and the South Fifth Avenue on-ramp. Northbound traffic on Interstate 15 was backed up for more than two miles because of the crashes.

All of the vehicle occupants involved in the wrecks were wearing their seat belts, state police said.

Less than an hour before the chain-reaction crashes in Pocatello, a local motorcyclist died of injuries he suffered in a head-on crash with a car on a highway south of Grace late Sunday afternoon.

The Caribou County Sheriff’s Office reported that Ricky Wayne Choules, 44, of Preston, was traveling on a 2007 Harley Davidson southbound on Highway 34 around 4:30 p.m. when he attempted to pass a vehicle and struck a northbound 2014 Ford Focus compact car.

The head-on collision resulted in Choules, who was not wearing a helmet, being ejected onto the roadway while his motorcycle careened off the highway, authorities said.

Choules was airlifted via emergency helicopter from the scene to Portneuf Medical Center in Pocatello where he died of his injuries, the Sheriff’s Office reported.

The Sheriff’s Office said the Ford Focus was driven by a 24-year-old woman who suffered non-life threatening injuries in the crash. Her heavily damaged car came to a stop on the highway’s northbound lane following the collision.

The woman was transported by ambulance to Caribou Memorial Hospital in Soda Springs for treatment of her injuries, authorities said. The woman’s name has not yet been released.

The crash shut down Highway 34 for two hours.

The Caribou County Sheriff’s Office is urging local motorists to drive carefully considering all the recent wrecks, including a Saturday morning collision between a tractor-trailer and car on Highway 30 in the Fish Creek Summit area.

The adult male driver of the car was transported via ambulance to Caribou Memorial Hospital in Soda Springs for treatment of non-life-threatening injuries as a result of the wreck, authorities said. The collision partially blocked Highway 30 for about 90 minutes.

”Please be extra careful and give yourself extra time to get to your destinations and use all the safety equipment you have available for your use,” Mabey said. “It is going to be a beautiful summer. Let’s make sure we make it through safely.”

Brice R. Hamann, 35, of Burley, was driving westbound on Interstate 86 in a 1999 Ford F250 when he drove off the road, state police said. The vehicle overturned coming to rest on its top in the median.

Hamann’s passenger, Miriah D. Dominguez, 46, of Burley, was ejected from the vehicle.

Hamann and Dominguez, who were not wearing seatbelts at the time of the crash, were both transported by ground ambulance to Portneuf Medical Center in Pocatello.

State police on Friday responded to a single vehicle injury crash on eastbound Highway 20 near milepost 343 in the St. Anthony area that was first reported around 1:30 p.m.

Gwendolyn Wasden, 21, of Provo, Utah, was driving eastbound on Highway 20 in a 2004 Hyundai Santa Fe when she attempted to pass another motorist, overcorrected and the vehicle rolled, coming to rest in the right eastbound lane, police said.

Wasden’s passenger, Faith Jensen, 22, of Alpine, Utah, was ejected from the vehicle. Ann Lee, 23, of Federal Heights, Colorado, and Kylie Sosa, 22, of West Jordan, Utah, were also passengers in the vehicle.

Jensen, the only occupant not wearing a seatbelt at the time of the crash, died at approximately 5:15 a.m. on Saturday morning at Eastern Idaho Regional Medical Center, state police said.

The eastbound lane of Highway 20 was blocked for approximately three hours.

Idaho State Police were assisted by Fremont County Sheriff’s Office, St. Anthony Police Department, and a warden from the department of Fish and Game.

State Police and other law enforcement agencies will continue to investigate all the crashes that occurred this past weekend.

Lastly, an Idaho Falls man died Friday evening when he was run over by a pickup truck with dual rear wheels pulling a trailer earlier in the afternoon. The man had exited the truck while it was still moving, according to the Idaho Falls Police Department.

The incident occurred at approximately 12:16 p.m., when Idaho Falls Police officers and Idaho Falls Fire and emergency medical services responded to a reported vehicle versus pedestrian collision near the intersection of Micro Street and Canyon Avenue, police said.

Investigating officers determined that a passenger exited the vehicle of their own volition while the vehicle was in motion. The vehicle, a truck pulling a trailer, inadvertently ran over the person before coming to a stop. The person who exited the moving vehicle and was subsequently run over sustained serious injuries.

Police officers and emergency medical personnel attempted life saving measures but the person, a 23-year-old male, ultimately succumbed to their injuries on scene. Police are not releasing the man’s name.

All crashes remain under investigation by Idaho State Police or other East Idaho law enforcement agencies.