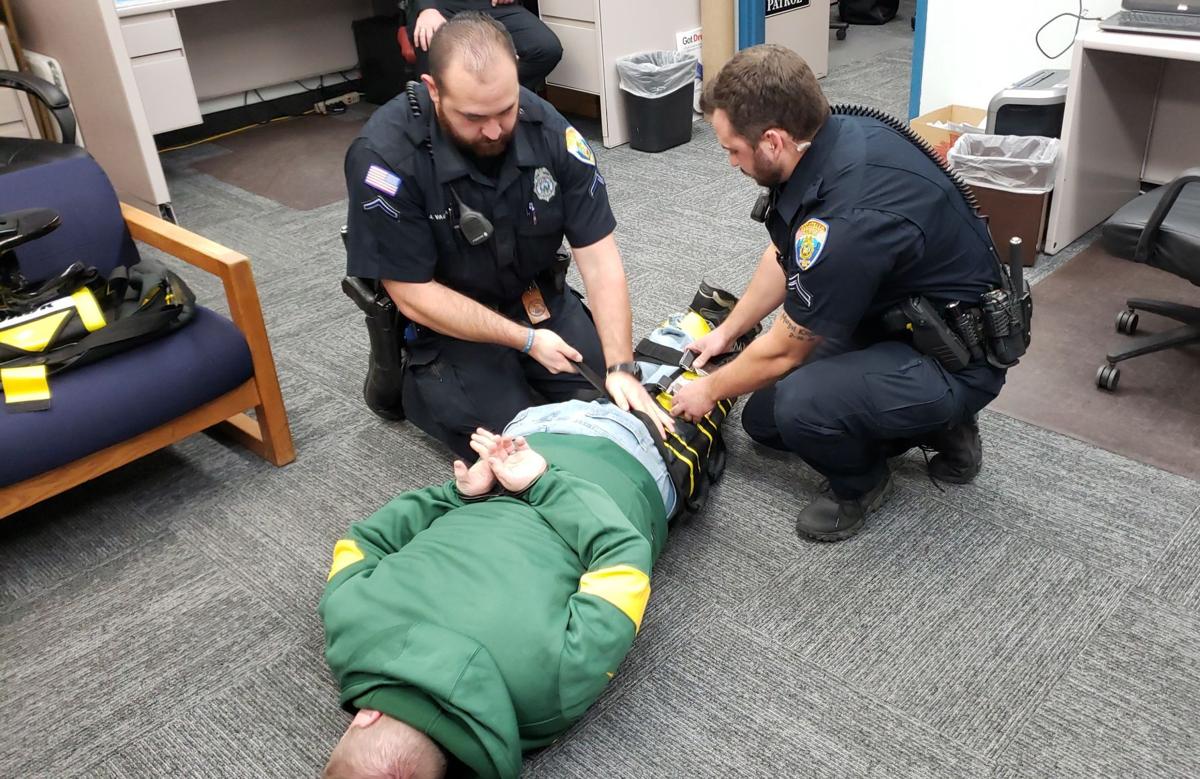 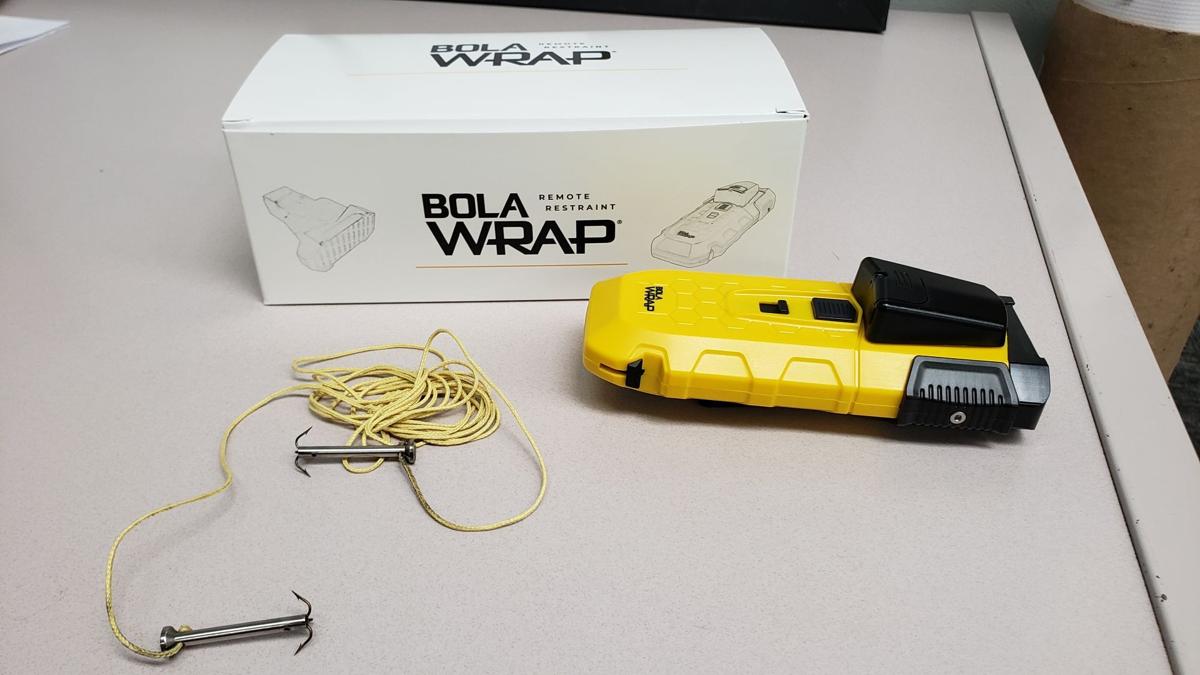 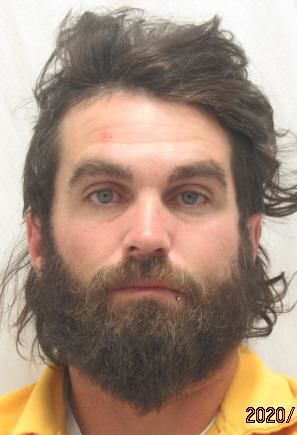 POCATELLO — The Pocatello Police Department earlier this month deployed one of two new restraining devices to subdue a domestic battery suspect who was allegedly biting an arresting officer, according to police reports the Idaho State Journal recently obtained.

To prevent the combative suspect, Caleb D. Trevino, 35, of Pocatello, from further injuring responding officers, as well as himself, officers placed him in The WRAP, a restraint system that includes an ankle strap, a chest harness and what is essentially a stiff nylon blanket with vertical steel rods that wrap around and immobilize a subject’s legs, police said.

Trevino was ultimately charged with misdemeanor domestic battery and felony assault upon a police officer for the Nov. 6 incident, which unfolded around 3 a.m. in the parking lot of the Office Bar & Grill on East Center Street, according to police. Including the Nov. 6 deployment, Pocatello police officers have used The WRAP about a half-dozen times. And so far, it’s been a huge success, says Pocatello police Capt. Eric Stapleton.

“Basically it’s a form of restraining somebody safely to a point where they can’t be combative anymore. In many situations, we encounter people dealing with mental health or drug-induced issues where even after they are put in handcuffs they can still be combative,” Stapleton said. “This is a quickly deployed device that we can use to restrain them until we can get them the medical help they need or until they calm down.”

To deploy The WRAP, Stapleton says the first priority is to get the subject under control and restrained in handcuffs. The first portion of The WRAP consists of a 3-inch-thick strap that is tightly cinched around a subject’s interlocked ankles. While the subject is lying in the prone position, officers then lift the person’s legs into the air and slide the leg component underneath, which consists of a thick nylon mesh and vertical steel rods that do not allow for any movement of the legs, Stapleton said.

Once the legs and ankles are secured, officers then roll the subject into a sitting position, install the chest harness and secure it to the handcuffs with another 3-inch strap.

“There is an upper harness that attaches to the handcuffs and tethers to the leg component that doesn’t allow any movement of the back,” Stapleton said. “When I first looked at The WRAP, I was a little skeptical and concerned about compression on the chest, but that tether from the chest to the leg component actually pulls the whole unit away from the chest. It’s not comfortable, but the person inside The WRAP will not feel any pain.”

Secured in a seated position, officers can use the several handles on each side of The WRAP to pick up the subject and secure them in a transport vehicle with the device still deployed. During training, Pocatello police officer Justin Vae’ena said the average time to install The WRAP was approximately 30 seconds.

The WRAP restraining device is produced by Safe Restraints Inc. and was developed by former police officers in California.

Pocatello police currently have three of The WRAPs in circulation, though Vae’ena says the goal is to ensure all supervisor vehicles come equipped with the device. As far as training goes, the department has already begun incorporating this device into all of its annual control and restraint sessions, Vae’ena added.

In addition to The WRAP, Pocatello police has also added another type of restraint device to it’s arsenal from Wrap Technologies Inc. called the BolaWrap.

“The BolaWrap is a remote restraint device that temporarily impedes mobility,” Vae’ena said. “It is a handheld device powered by a blank round that propels an 8-foot Kevlar cord with a 380-pound test strength.”

Each end of the cord contains an anchor with four barbed hooks designed to attach to a subject’s clothing and temporarily restrains them without relying on a pain compliance, said Vae’ena, adding that the BolaWrap may be used to prevent situations from escalating and resulting in the need to use more injurious force options, thus avoiding injuries to both officers and subjects.

“The BolaWrap gives law enforcement officers the ability to restrain and apprehend subjects with menial use of force,” Vae’ena said. “When used properly, it causes minimal to no pain.”

Though Pocatello police have yet to deploy the BolaWrap in the field, Vae’ena and Stapleton demonstrated how the device works during a recent training session.

When deployed, the device emits a loud bang similar to a gunshot. A thin laser line serves as the device’s crosshair. The cord with anchors on each end is discharged from the device at 640 feet per second.

Much like The WRAP, the main intent of the BolaWrap is to de-escalate situations and to ensure confrontations with officers are handled quickly, safely and efficiently, for everyone involved.

“The main thing with these devices are they are tools for us handle situations as quick as possible,” Stapleton said. “The less time we are fighting with a subject the less likely anyone is to get hurt.”

Life is full of uncertainties. Do you have your affairs