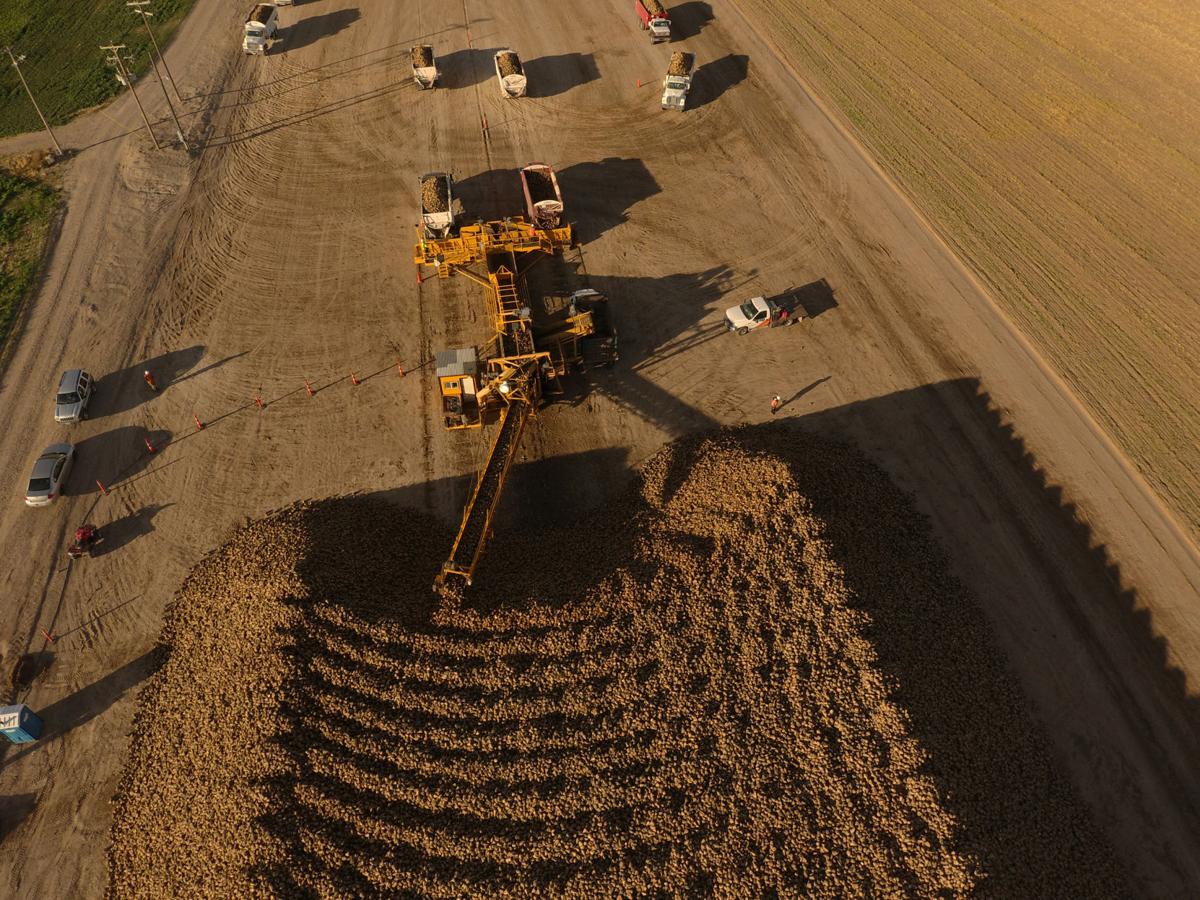 A drone’s-eye view of the sugar beet lot along South Pleasant Valley Road near American Falls. 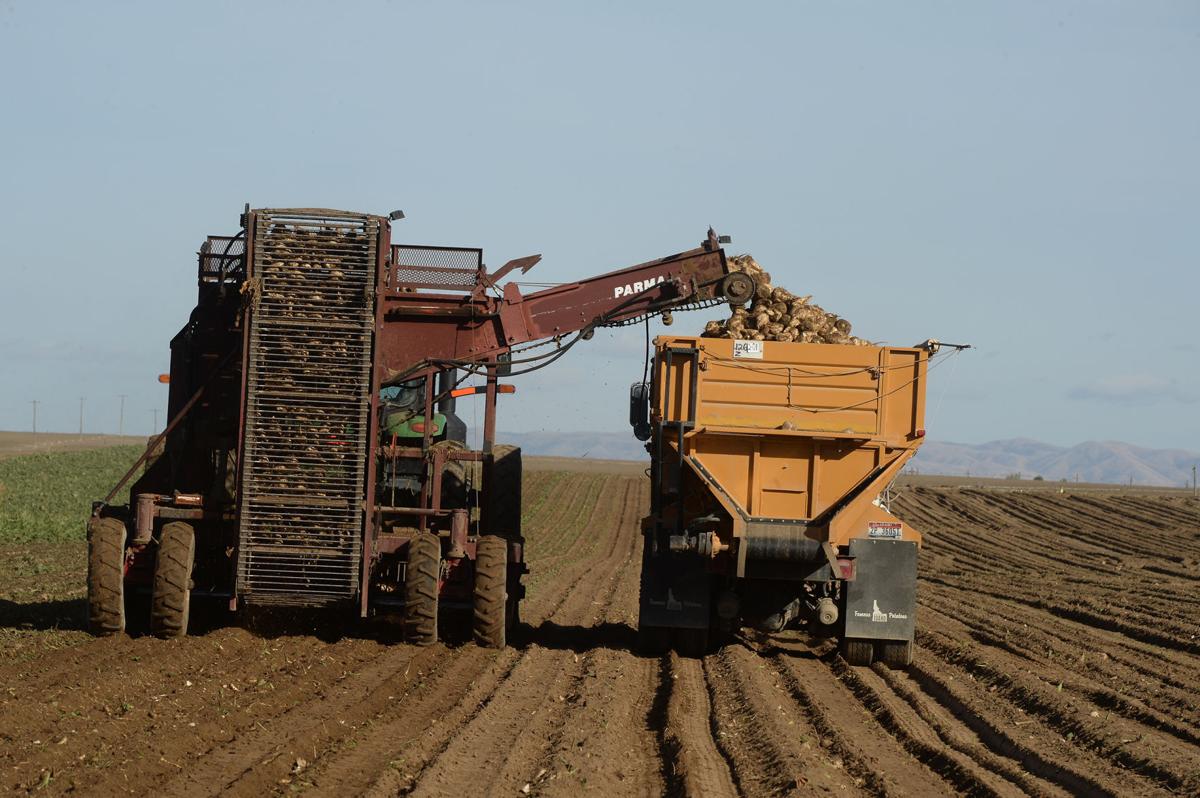 A drone’s-eye view of the sugar beet lot along South Pleasant Valley Road near American Falls.

It's only been a few years since U.S. sugar beet farmers faced a potential financial crisis due to negative public perceptions about food products derived from biotechnology.

Nowadays, however, the sugar beet industry is flipping the narrative, capitalizing on what was once its Achilles heel — its universal adoption of GMO seed.

Since, 2009, the nation's sugar beet crop has been almost entirely planted in seed genetically modified to resist glyphosate herbicide, which is produced at Bayer's Soda Springs plant. Lately, to strike a chord with an increasingly environmentally conscious consumer base, the sugar beet industry has been touting how biotechnology has made its crop production system far more sustainable.

Idaho is the No. 2 state in production of sugar beets by ton.

"We have lots of data," said Scott Herndon, vice president and general counsel with the American Sugarbeet Growers Association. "We submitted something to the National Academy of Sciences where we identified 25 environmental gains achieved through biotech seeds related to water, soil and air."

Herndon explained the gene added to confer glyphosate resistance to GMO beets is entirely removed in the processing of sugar. He referenced laboratory testing conducted by his industry proving finished sugar raised by American sugar beet farmers is identical to organic sugar and cane sugar in general.

Furthermore, the large Pennsylvania-based candy manufacturer Hershey Co. removed GMO beet sugar from many of its products in 2015 in favor of conventional cane sugar. In explaining  the decision, Hershey affirmed GMO ingredients are safe but emphasized its commitment to openness and transparency.

"People care about the food they eat," Hershey posted on its website. "They want to know what's inside and they want to have choices so that snack options meet their expectations."

Rather than providing the public with transparency, Markwart believes mandatory labeling of beet sugar would be misleading, causing people to falsely believe beet sugar and cane sugar are somehow different.

Under the Obama Congress passed a preemptive law in 2016 exempting beet-derived sugar from state GMO labeling requirements. It took effect in December of 2018, though food companies are still allowed to voluntarily state that a product is derived from a bioengineered crop.

"Once you got the federal preemption, all of a sudden the beet and cane price came back together," Herndon said.

Labeling proponents, however, note that surveys consistently find consumers support GMO labeling by wide margins, believing people who are skeptical of a technology that is found in more than three-quarters of the processed foods in supermarkets should have the ability to avoid it.

"While many in the scientific community assert that GMO foods are not toxic and are safe, a significant number of scientists are sounding the alarm," Mark Fergusson, CEO of Down to Earth Organic & Natural, said in an essay posted on his organization's website. "They say genetic engineering poses risks that scientists simply do not know enough to identify."

Fergusson encouraged the public to choose foods with the organic seal, certifying that GMOs were not used in production.

GMO advocates argue that reputable scientific data evidencing health risks of GMO technology has yet to be produced.

The industry's comments to the National Academy of Sciences on Sept. 9, 2015, for example, cited several studies on the safety of GMO crops, including a 2011 summary report by the European Commission covering a decade of publicly funded research, 130 research projects and 500 research groups concluding "there is no scientific evidence of higher risks of GE crops for food and feed safety, or to the environment."

The environmental benefits of GMO crops, however, are well documented, Markwart said.

The sugar beet industry points to a 2002 study by the National Center for Food and Agriculture Policy evaluating eight of the most commonly used herbicides, finding glyphosate posed the least potential risk. Furthermore, glyphosate binds tightly to the soil and is less likely to contaminate groundwater, according to the industry's literature.

According to USDA data, sugar beet yields increased by 19% with glyphosate-resistant seed from 2008 through 2015 compared with the conventional average. The percentage of sugar in each beet also increased dramatically.

Brad Griff, executive director of the Idaho Sugarbeet Growers Association, said the Gem State's farmers have increased their yields by roughly 10 tons per acre on average since the implementation of GMO sugar beets.

"Before the GE sugar beet we never had reached 18% sugar. Now for three of the last six years we've been at or above 18% sugar," Griff added. "That's all been accomplished while reducing pesticide use by 85% and reducing fuel use by 60%."

In its Agriculture Innovation Agenda, USDA asked farmers of various commodities to plan strategies to increase their output by 40% while cutting their environmental impacts in half. The sugar beet industry submitted comments toward that effort focusing largely on achieving the goals through improved genetics.

Looking ahead, Markwart anticipates sugar beet seed engineered with multiple-trait tolerance to three herbicides — glyphosate, dicamba and glufosinate — should be released by 2026. He explained the new seed should help farmers avoid the onset of glyphosate-resistant weeds by enabling them to use multiple modes of action.

The industry also sees great promise in gene editing, which allows crop breeders to silence or amplify existing traits in a plant's genetics rather than introducing desirable foreign traits.

Herndon believes sustainability should be viewed as a "three-legged stool" factoring in social, economic and environmental costs. He said farmers are the lifeblood of rural economies and have a social contract to help keep their rural communities afloat. While it's important that they continually push the envelope to reduce their impacts on the environment, Herndon said farmers must also eke out a profit.

Markwart added, "We used to have hand labor. No one is going to go back and do that again. We have made major advances in efficiencies with this technology."