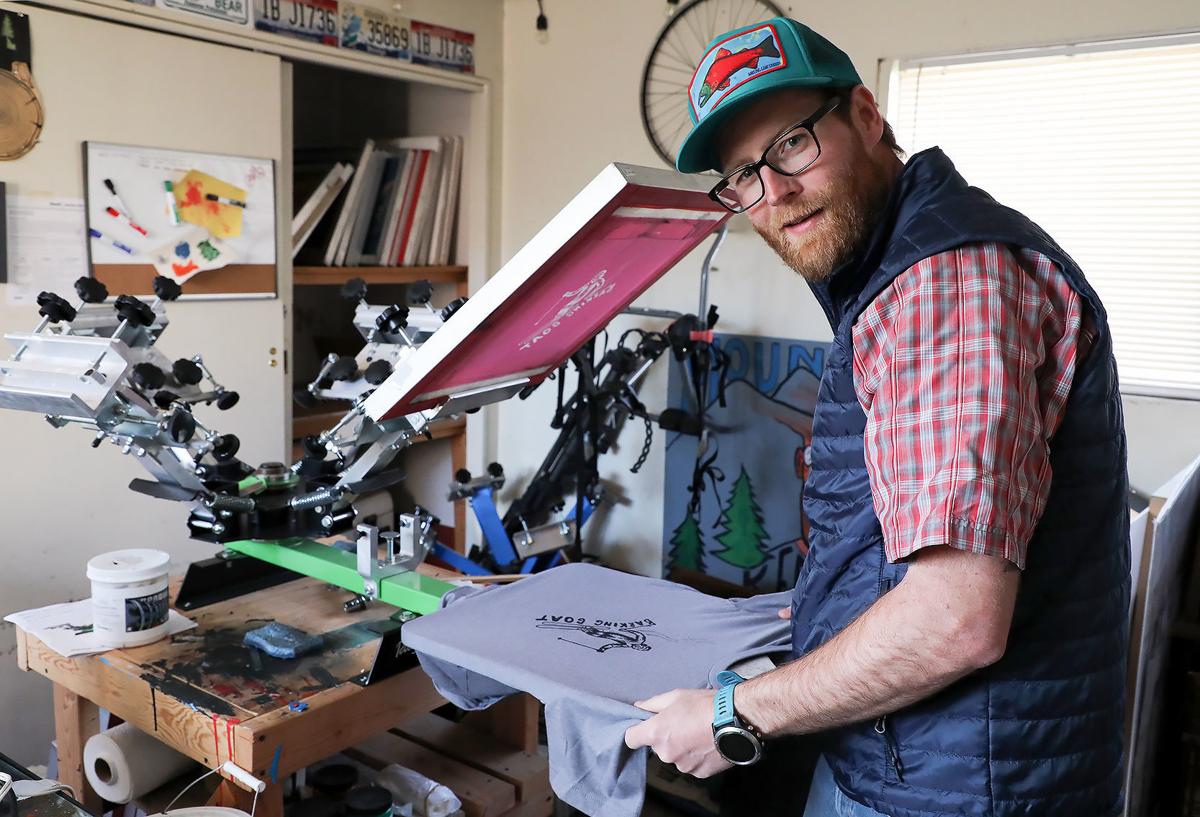 Stacey Barker, who runs the business Barking Goat Studios, is pictured in his Pocatello home with his screen printing machine. 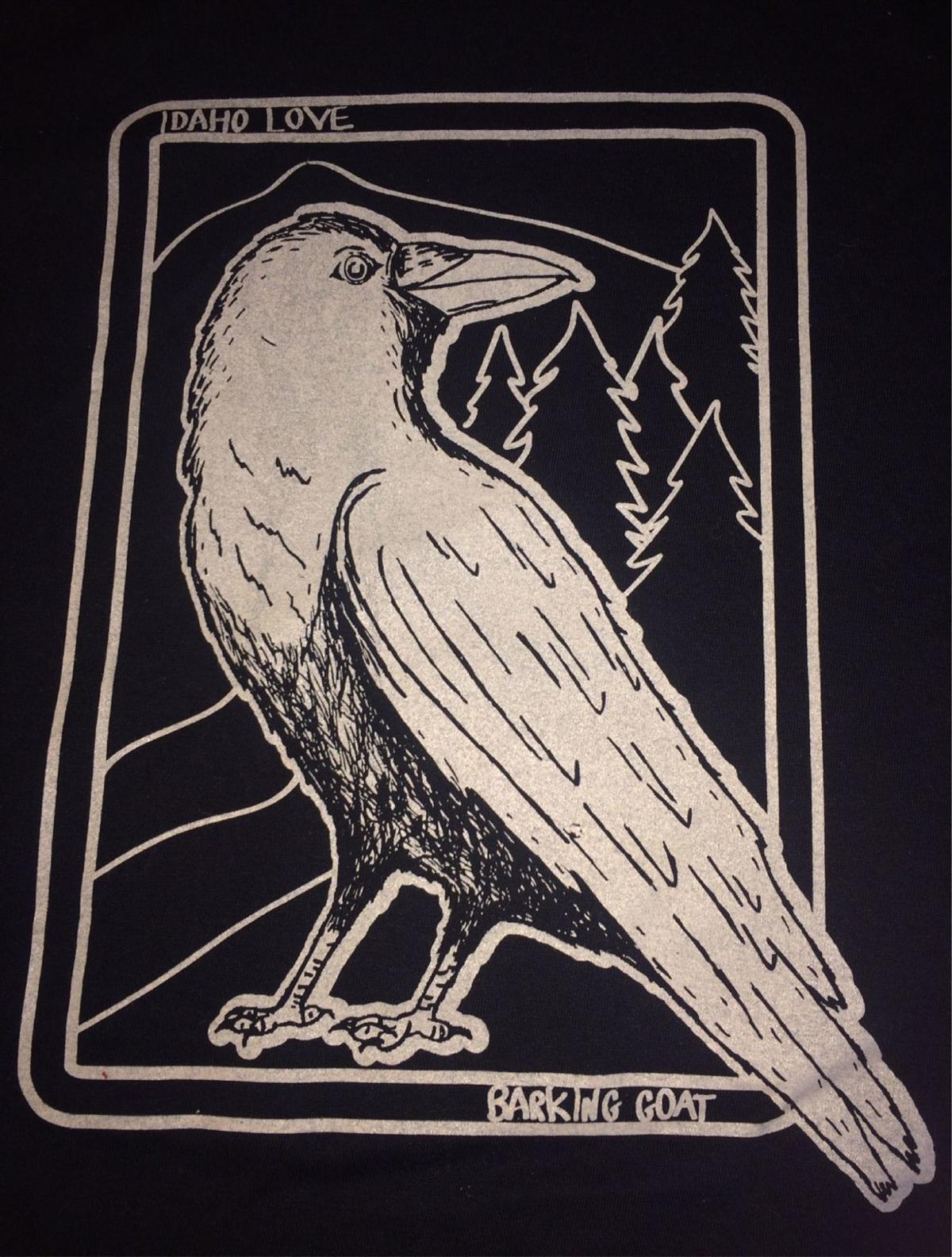 This raven is a popular design offered by Stacey Barker, of Pocatello, and his Barking Goat Studios.

Stacey Barker, who runs the business Barking Goat Studios, is pictured in his Pocatello home with his screen printing machine.

This raven is a popular design offered by Stacey Barker, of Pocatello, and his Barking Goat Studios.

POCATELLO — Stacey Barker’s works of art are affixed to surfaces throughout the region — on water bottles, car bumpers, trash bins, bike racks and even a few ski lift towers.

When he’s inspired, he’ll open one of his many notebooks filled with half-finished sketches, make a few tweaks and mentally plan his next sticker design. He may think to match a pair of legs peddling a cruiser bicycle with an anthropomorphic raven’s head.

In a world of stock images, the 37-year-old Pocatello artist offers something radically different with his Barking Goat Studios.

“People just like funky, handmade stuff,” Barker said. “A lot of people just look at (my designs) and it makes them want to smile. There’s so much stuff out there that’s cut-and-paste stock designs that I think a lot of people want something more unique.”

To friends, Barker is the Sticker Guy. He keeps a plastic bin in his home filled with his personal brand of stickers, grabbing a handful to zip into his backpack when he heads out. He sells them for $3 to $5 each, depending on size, but he also delights in giving much of his inventory away to friends.

“With a sticker, there’s a million possibilities,” Barker said. “You can put them on a skateboard, a car, a coffee cup, skis. I’ve been seeing them on cars all over town.”

Barker also sells T-shirts featuring his own designs — made in a personal silk-screening facility he opened in his garage — on Instagram, at the Portneuf Valley Farmers Market, at local coffee shops and via barkinggoatstudios.com. He’s been hired to design and print T-shirts for several small businesses in the area, including Oregon Trail Bikes, College Market and Leapknot Coffee Roasters. He designed a special sticker for Bru House Galilei.

Barker prints the occasional hat, and he’s sold a few portraits and murals. Most recently, Barker finished painting a mural inside of Pocatello Running Co., featuring the logo of the store, the local running club’s logo and a scene from his own imagination — an owl flying out of a running shoe.

For now, art and printing represent a side job for Barker, who works full time for Old Town Embroidery.

“With the slow path I’m going, I think it’s going to be a full-time job eventually,” Barker said.

Barker grew up in Pocatello, having moved away from the city only when he was deployed to Iraq with the Army National Guard in 2005. He obtained a Bachelor of Fine Arts degree from Idaho State University, specializing in painting and print making.

He was exposed to designing and printing T-shirts when he took a job with SLT Graphics. He printed a few shirts for friends, who were impressed and encouraged him to offer some for sale.

With his unique shirts gaining in popularity, he decided to buy a table press and built some of his own printing equipment. He’s created a small dark room, explaining making printing screens is a photosensitive process similar to developing film.

“You burn your drawing into the screen. After that, you throw some ink on there and away you go,” Barker said.

His garage reflects his two passions — art and the outdoors — and has come to resemble a combination printing shop and personal bike shop. His love of nature and outdoor activities features prominently in his designs.

His trademark sticker design features a hawk flying over a mountain and the words “Barking Goat Studios.” Another popular sticker depicts the likeness of his old dog with a pair of skis crossed below its face. His likeness of Bigfoot taking to the slopes is also a good seller.

His business name combines his last name, Barker, with his wife’s maiden name, Goats. His wife, Christina, is a physical therapist who often offers up ideas for his artwork.

Barker’s buddy, Bob McDonald, has become the unofficial ambassador for Barking Goat Studios. McDonald resupplies whenever he meets up with Barker and routinely distributes his stickers. At the recent Pebble Creek Ski Area telemark festival, for example, McDonald spread an assortment of stickers on the prize table.

Handing out stickers is McDonald’s means of performing a daily “random act of kindness.”

“I love giving them out, and I love seeing people’s reactions,” McDonald said. “They’re so random. You see them pop up when you least expect it. They’re homemade. They have animals on them. It’s pretty obvious they are not like any other sticker.”

Barker has honored McDonald with his own character and T-shirt design, made for McDonald to wear when he participated in a 50-mile bike race during the fall.

The shirt features a man with a coyote head peddling a bicycle along a trail in Pocatello’s City Creek area. Barker explained coyotes are common throughout City Creek. The character also has a ukulele strapped to his back — McDonald’s preferred instrument.

“I’ve kind of tried all avenues to get some artwork out there,” Barker said.