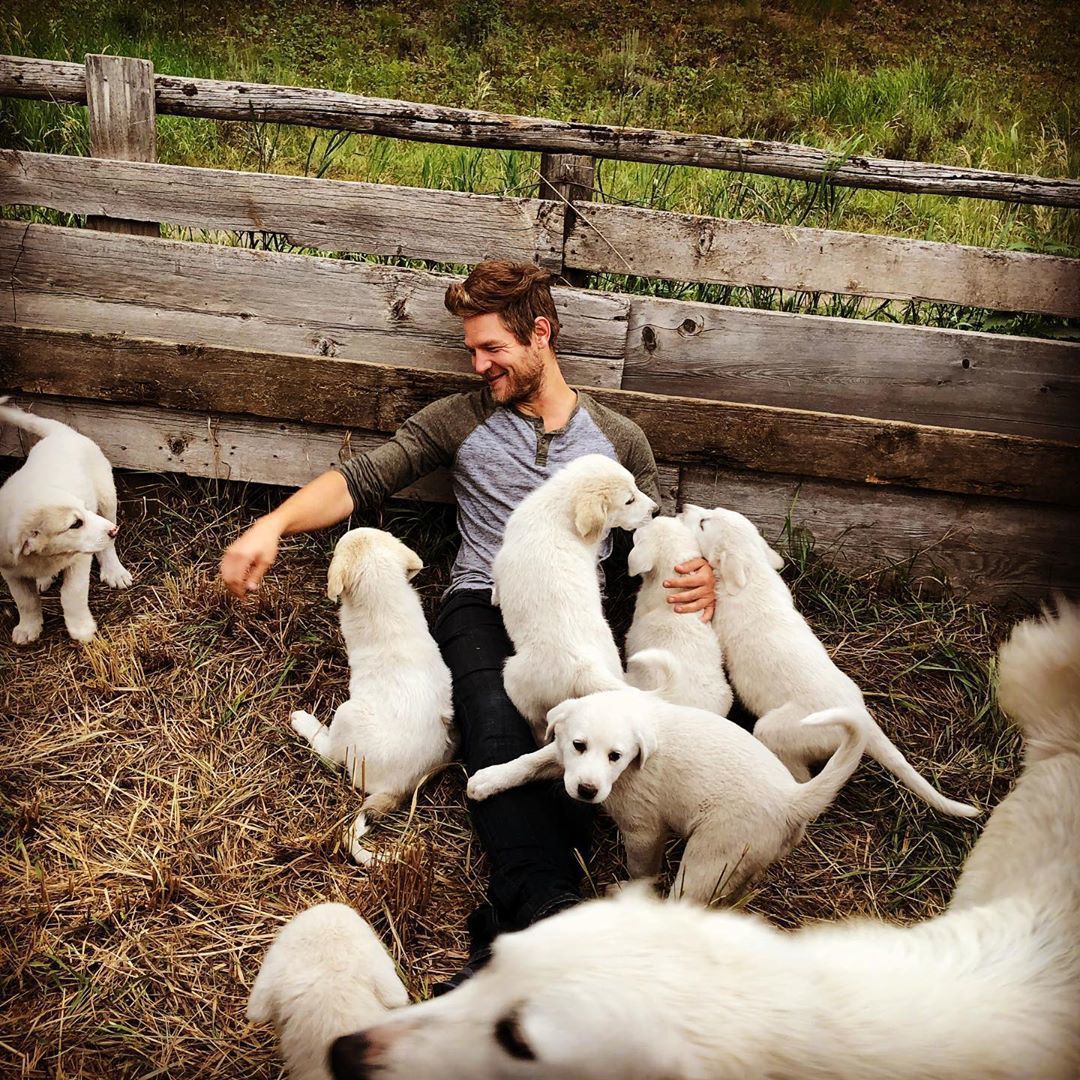 Cory Peavey, a fifth generation sheep rancher with the Flat Top Sheep Co. near Carey, sits with a litter of Pyrenees puppies he is raising. 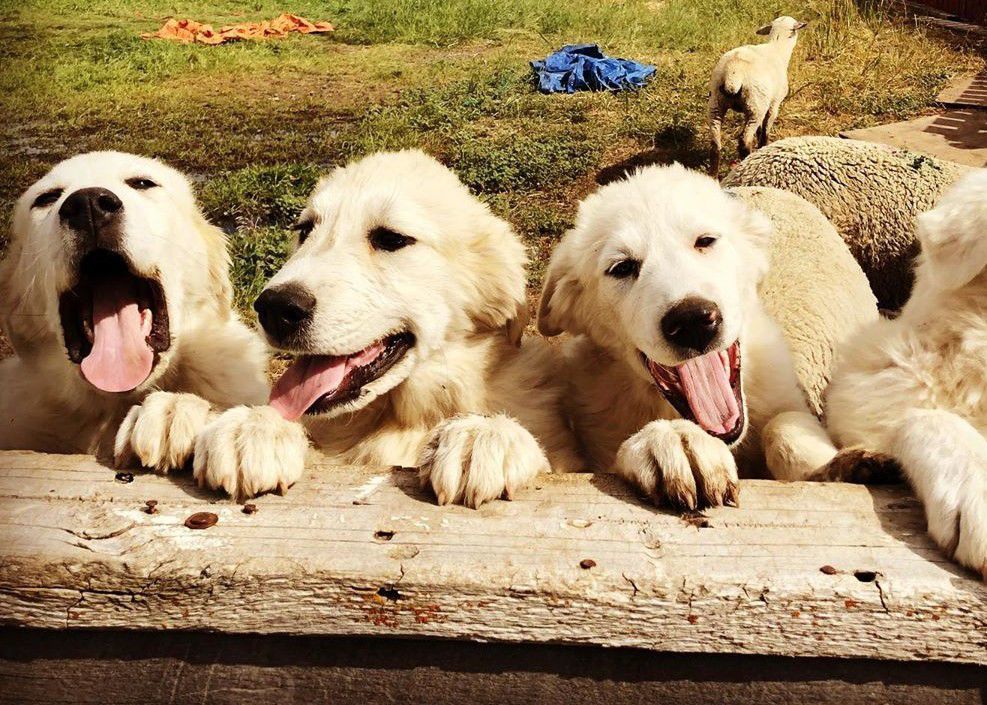 A group of Cory Peavey's Pyrenees sheep dogs in their corral. 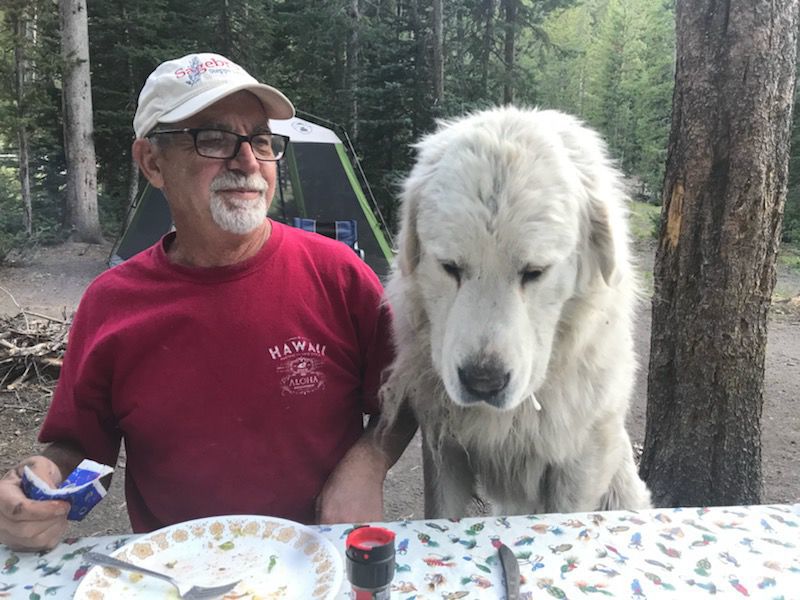 Randy Dixon of Pocatello sits with a Pyrenees sheep dog that he encountered during a recent camping trip near Sun Valley. 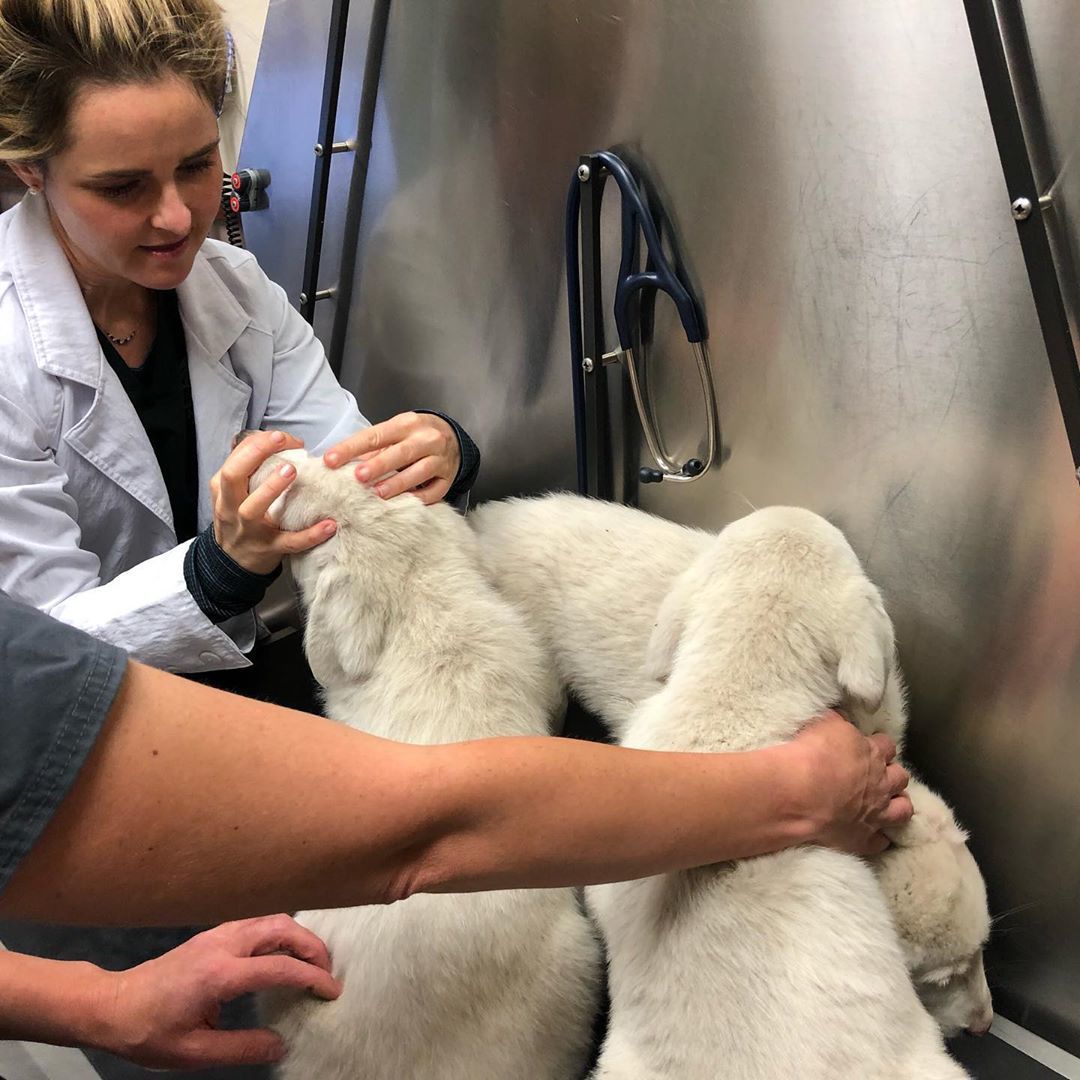 A group of Cory Peavey's Pyrenees puppies get their first checkups with a veterinarian.

The grandson of a longtime rancher and former state lawmaker has recently started a program that has in some ways made him the black sheep of Idaho’s ovine community.

Cory Peavey of the Flat Top Sheep Co., which operates out of a ranch north of Carey in the central Idaho mountains, is the grandson of John Peavey, who in addition to serving in the Idaho Senate as both a Republican from 1969 to 1976 and as a Democrat from 1978 to 1994 also founded the annual Trailing of the Sheep Festival held in Ketchum every October.

This is a big change for Idaho’s sheep herding industry, which has traditionally treated sheep herding dogs as livestock and not provided much care for them. Reports of abandoned sheep dogs roaming Idaho’s backcountry have dramatically increased in recent years causing concern about how the dogs are being treated by sheep ranchers.

Cory’s hoping to make life better for the canines by changing the way the sheep herding industry raises and cares for them. He hopes the new program he’s started at Flat Top’s ranch to better treat the canines will be adopted by sheep ranchers everywhere.

“I have to explain that my program is still in its infancy, but I have these two litters of Pyrenees pups that will signify the first generation of dogs to be fully trained, cared for, microchipped, rabies vaccinated, equipped with GPS collars and tracked,” Cory said. “There will be a journey for every dog. Each dog will have a name and a story that I can show the public as they continue to work hard and hopefully live a long, healthy life.”

Word of Cory’s plan made its way to Southeast Idaho after well-known Pocatello resident Randy Dixon and his wife encountered what they later learned was likely a Pyrenees sheep herding dog that no longer herded sheep and for whatever reason had abandoned its herd.

During a recent camping trip near Trail Creek Summit about 30 miles north of Sun Valley, the Dixons first observed a group of three sheep herding dogs and three herders moving a herd of roughly 200 sheep up a nearby trail.

“About 30 minutes later, a guy came driving by in a pickup with another one of these dogs, our dog if you will, in the back and he asked us, ‘Are there sheep around here?’” Dixon recalled. “I’m sure he knew this herd of 200 or so sheep were in the vicinity. We told him where they were and he said he had found this dog about 2.5 miles south of us. He took the dog up to the herd and 30 minutes later the dog was in our campground for dinner.”

Dixon added, “I have to be honest, we fed him, petted him, looked him in the eyes and loved on him. He looked older, but healthy. He looked like he had several months’ worth of burrs and what not stuck to him, but he was friendly.”

The dog left after dinner but by that point Dixon was curious, so he decided to walk up the trail to locate the herd of sheep and the herders.

He found the herders, who were Peruvian and spoke broken English. Dixon said that from what he could understand, the dog that visited him and his wife for dinner didn’t like sheep herding anymore.

“I got the impression that the dog was no longer valuable to them,” Randy said.

Around 8 a.m. the next morning, the dog returned to have breakfast with the Dixons before again trotting off into the wilderness.

It wasn’t until the Dixons returned to Pocatello that they were confronted with the stark reality involving the sheep herding dog community. Once a sheep herding dog will no longer herd sheep, it’s often euthanized or abandoned by the herders, Dixon said.

“We found out this is a common practice in the sheep herding industry. These dogs are not pets. Ranchers basically treat these dogs like they are livestock,” Dixon said. “They have no problem shooting them dead or abandoning them in a field somewhere.”

He continued, “Ranchers typically don’t spend a penny on health. These dogs are not vaccinated, spayed or neutered, and there are large groups of these animals being released in the wild without any way for the ranchers to follow their whereabouts.”

Dixon’s research led him to Sun Valley residents Gary Tickner and Tiffany Larson who over several years have rescued four Akbash sheep herding dogs, a breed much like Pyernees with huge bodies and sharp intelligence.

Oddly enough, Dixon encountered the wild Pyernees dog on Aug. 20, the same week that Tickner and Larson hosted an event in Ketchum to raise funds for Cory’s program. By way of a raffle fundraiser on Aug. 22 at Hotel Ketchum, Tickner, Larson and dozens of others were able to raise more than $4,000.

“The elders, (Cory’s) grandparents and everybody before them, always were taught not to touch the puppies,” Tickner said. “They were taught not to give them human contact or the dogs wouldn’t do their work. But Cory has decided that after all these years, he doesn’t agree with the way guard dogs have been raised.”

Tickner continued, “He wants to show the elders that this can be done differently. The black sheep of the family will resist what their parents and their parents believed in, but a small change like this can have a massive ripple effect.”

At Flat Top’s ranch, Cory is one of several ranch hands tasked with tending to about 4,000 breeding ewe. With an average herd sitting at around 1,100 sheep and three to five guard dogs per herd, Cory is responsible for several working dogs at any given moment.

Every dog is around sheep from the moment it’s born, Cory said.

“I house the puppies in a corral in front of my house and they will stay with the group of sheep, safe from the elements and predators,” Cory said. “They grow up in a controlled environment and learn to behave in proximity to sheep. My belief is that they actually think they are sheep but have canine extincts. They bark when there is a threat and work together, but they stay with the herd.”

He continued, “They know that wherever the herd is that is where they will find food and safety. They stay in the corral until they are bigger than a coyote. Depending on the weather and terrain, I will release the dogs in groups of two per (herd) and they will begin working with the herd. Albeit some of these animals make incredible domestic partners, it is in their blood to run with sheep.”

As a person who has spent his entire life around working sheep dogs, Cory said he knows what has been the historical norm when it comes to raising the canines. But he also said he knows slight changes to the process won’t have a significant impact on a dog’s work ethic.

“The old rancher stigma is that if you show a litter of puppies any affection when they are born and as they are being raised, then they won’t perform and do their job,” Cory said. “They would rather hang around the house or find an empathetic owner somewhere. (The old ranchers) actually believe that it ruins the dogs. But as a kid I wouldn’t listen to them. They would bark at me not to touch the dogs, but I would do it anyway. I found those dogs did just fine. I thought my grandparents were full of malarkey.”

Contrary to what Dixon said, ranchers never intentionally abandon a sheep dog, Cory said. But because the norm has been to raise the dogs with minimal human interaction, even ranchers who do locate lost sheep dogs have difficulty corralling them because the canines don’t trust people.

An increase in housing developments in what has been rural farmland for decades in Idaho has only exacerbated the issue of sheep dogs losing their way, Cory said.

“When they are so wild, you can’t corral a dog that is emaciated, needs a rabies shot or needs medical attention for an injury,” he added. “When they are left behind you need to be able to catch them. That is the trouble with what we are seeing around populated areas. The dogs get distracted, intimidated or confused by traffic or development that seems to be happening more and more. These dogs end up leapfrogging a lot more ground and mileage to get to the sheep. If they don’t have that strong herding instinct they may get left behind. Others might get left if they have been up all night intimidated by predators and fall asleep during the day unaware that the (herd) is moving on. That is how you end up with lost dogs.”

Developing a bond with the sheep dogs while they’re young is the first step in reducing the number of dogs that essentially become wild animals once they lose their herd. But being able to find lost dogs in the first place is equally important.

To track the dogs as they work, Tickner recommended Cory use the same device he used to track one of his dogs, a Garmin Alpha 100 handheld device with a TT15 GPS dog tracking collar. For 20 collars the total cost is roughly $6,500, which Cory said is a price within reason, but the battery life of each collar is only 48 hours, which is not long enough for the amount of time a dog may be lost.

As of now, the $4,000 raised from the Ketchum fundraiser is sitting in a bank account as Cory attempts to find additional sponsors for his program and GPS tracking collars that will better fit his needs.

Peavey is working with various animal advocacy and welfare groups to raise funds for tracking collars for his dogs, he said, adding, "Those groups suggested I look into the collars that are put on wolves to track their migration patterns. They allow GPS tracking through an iridium satellite network and have a battery life of about two years. The catch is they are $1,500 to $2,500 a piece and I need 20.”

As he works to secure more funds, Cory is also working to raise awareness of his program, especially in Idaho’s ovine community and among other sheep ranchers. He understands encountering resistance is nearly unavoidable.

“I’m not expecting every rancher to empathize or understand,” Cory said. “But I am somewhere in the middle. It is still absolutely necessary for me as a rancher and for the public to understand that sheep ranching and guard dogs go back thousands and thousands of years and the relationship has been predominantly the same. It’s for a reason, but the reasons are poor.”

He continued, “I don’t perceive sheep dogs to be just livestock. If they are in poor health and have needs, then I am determined to help them. I’ll be damned not to do the very best for them that I can.”