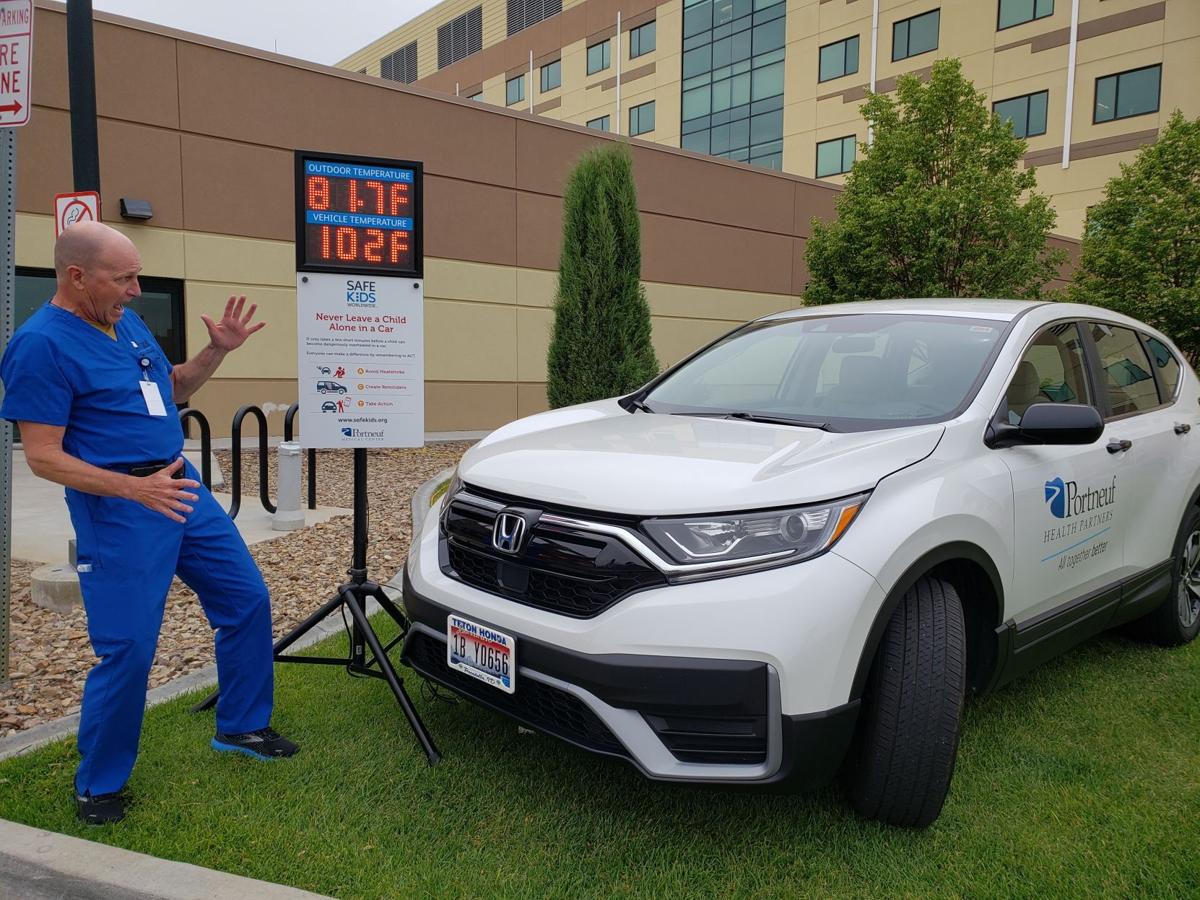 Drew McRoberts, the trauma medical director at Portneuf Medical Center, shrieks at the site of a vehicle registering just over 20 degrees hotter than the outside temperature during a demonstration about heat stroke on Monday. 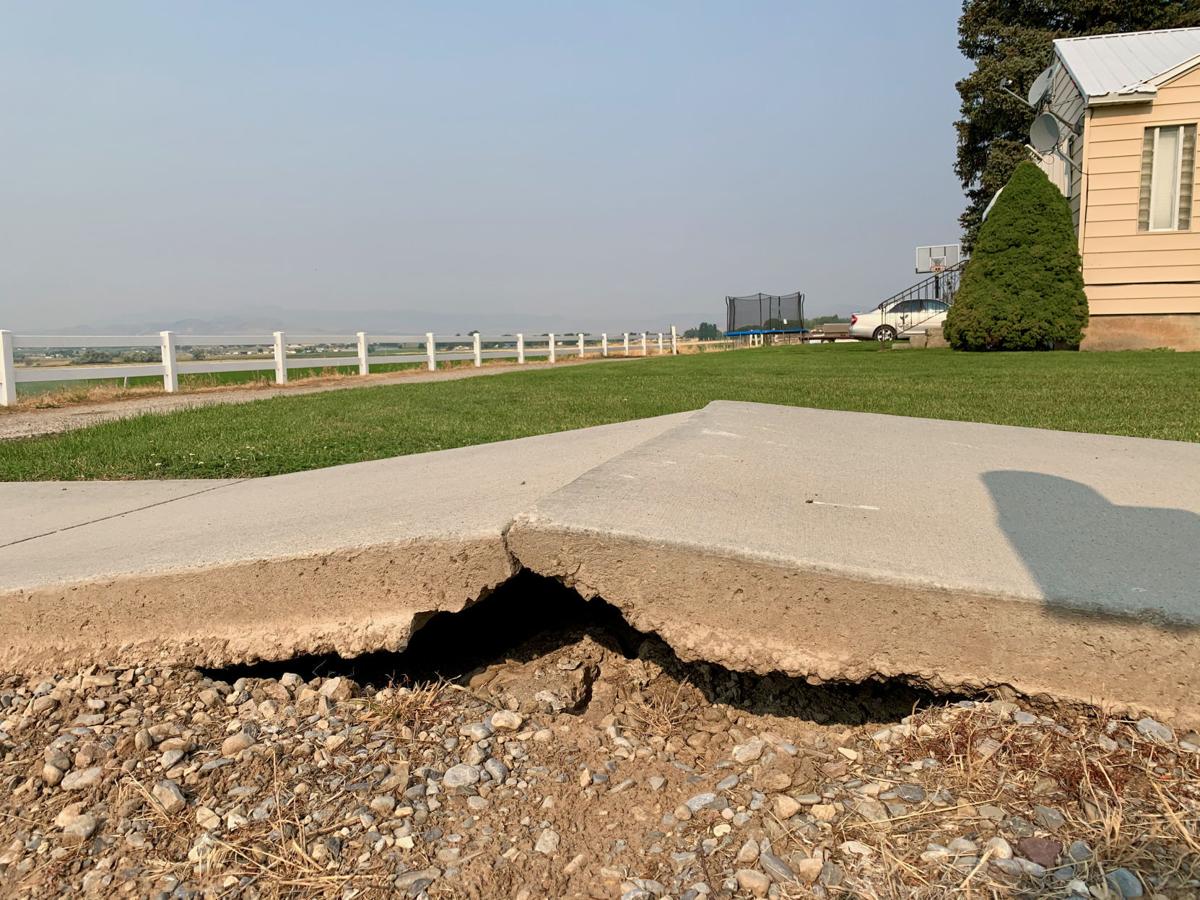 Sidewalks in Preston are beginning to buckle due to the hotter than normal temperatures throughout East Idaho this summer.

Drew McRoberts, the trauma medical director at Portneuf Medical Center, shrieks at the site of a vehicle registering just over 20 degrees hotter than the outside temperature during a demonstration about heat stroke on Monday.

Sidewalks in Preston are beginning to buckle due to the hotter than normal temperatures throughout East Idaho this summer.

POCATELLO — It’s shaping up to be the hottest summer ever for Pocatello, which has seen its second-longest streak of consecutive days of at least 90 degree temperatures on record.

“We are a little fortunate now as we are starting to see that typical mid- to late-summer monsoon kick up from the southwest, which is what has brought the extra humidity and thunderstorms to East Idaho over the past several days,” Harmon said. “That will continue Wednesday and Thursday before we get into another dry spell, but we could see some of that monsoonal flow return by mid-week next week.”

Harmon said showers and thunderstorms early in the day Thursday could hold down the temperature. While it did rain some on Thursday, the mercury still topped out above 90 in the afternoon.

“Thursday (was) the next chance for the record streak in Pocatello to be in danger,” Harmon said. “As the moisture moves away over the weekend, temperatures will warm up again into the mid-90s with less potential for the moisture to inhibit temperature growth throughout the day. If these thunderstorms get another fire going or the trajectory of the upstream smoke in California, Oregon and some of the fires in central and northern Idaho moves, the heavier smoke could also be an inhibiting factor on temperature growth. But ... the streak will almost certainly continue for the next week, which would be record-breaking.”

As the sweltering heat continues in Southeast Idaho this week, Portneuf Medical Center has begun warning the local community about the dangers of heat stroke, especially among children left in hot vehicles.

Drew McRoberts, the trauma medical director at PMC, and Greg Vickers, PMC’s trauma and emergency medical services manager, hosted a hot vehicle and heat stroke education seminar at PMC on Monday to demonstrate how much the outside temperature differs from that of a vehicle parked in the sun.

According to Safe Kids Worldwide, a nonprofit organization that works to help families and communities keep kids safe from injuries, the inside temperature of a vehicle typically increases 19 degrees in just 10 minutes.

“The majority of kids who die in heat-related car illnesses are under 2 years old and basically have the inability to tell you they are having trouble,” McRoberts said. “A child’s temperature rises three to five times faster than an adult’s does. If you leave a 2 year-old in a car that reaches 120 degrees, they can literally die in just a few minutes.”

Vickers says that as a means of educating the public about the dangers of heat stroke, PMC is looking for community partners to showcase its hot car detection system, a device that uses thermometers to measure the temperature inside a vehicle compared to the outside air. Any local business or interested group can contact Vickers at greg.vickers@portmed.org to for arrangements.

“Avoid heat stroke-related injury and death by never leaving a child alone in a car, not even for a minute,” McRoberts said. “Create reminders by leaving a teddy bear or stuffed animal in your child’s car seat and then move it to the front seat as a visual reminder to remember your child in the backseat. And lastly, if you see a child alone in a car, call 911. Don’t wait and if you can see that the child is in really rough shape, break out the window and get that child out of the car.”

Much of the heat wave in East Idaho can be attributed to a persistent high pressure system that has sat over the Western United States, Harmon says.

“We had a below normal winter in terms of snow accumulation here in East Idaho,” Harmon said. “It was a drier than normal winter and we just didn’t have enough moisture to work with at the beginning of the year and we got hot and dry pretty early.”

Temperatures have been so steep in East Idaho that sidewalks are beginning to buckle in Preston. The Preston Citizen says city workers who have cared for public infrastructures in Preston over the last four decades have never seen something like this before.

Since mid-June, temperatures in Preston have remained higher than usual, often hovering in the high 90s and low 100s. Like other materials that expand with heat, cement has absorbed the high temperatures long enough that they expanded, causing sidewalks to buckle.

Moving forward, both the six to 10 and the eight to 14 day forecasts show above normal temperatures continuing for most of East Idaho, said Harmon, adding that there appears to be some concentrated precipitation across northern Nevada, northern Utah and southern Idaho.

“That precipitation is more so in the six to 10 day range, which is indicative of that monsoonal thunderstorm flow that comes up from Arizona,” Harmon said. “We also see that on the three to four week outlook as well. It’s looking really positive and hopefully that extra moisture will help us turn the tide a little bit, but temperatures are looking to be higher than normal in the West throughout the rest of the summer.”