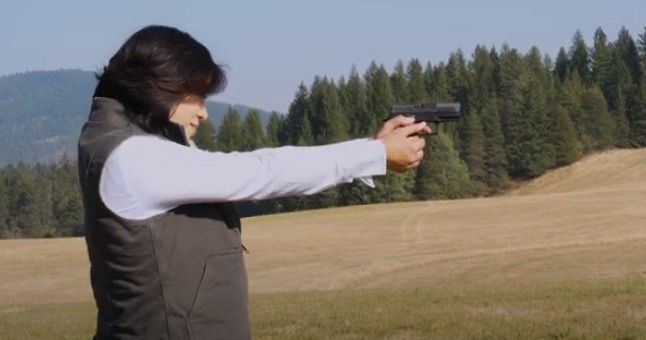 Paulette Jordan shoots at a target in her latest campaign ad in her run for the U.S. Senate. 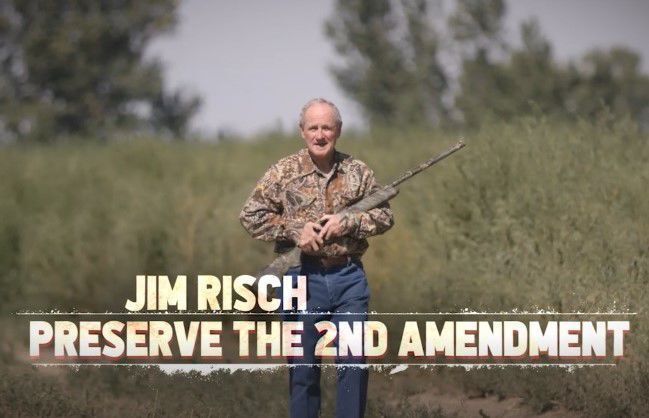 Jim Risch holds a shotgun in his latest campaign ad as he seeks a third six-year term in the U.S. Senate.

Paulette Jordan shoots at a target in her latest campaign ad in her run for the U.S. Senate.

Jim Risch holds a shotgun in his latest campaign ad as he seeks a third six-year term in the U.S. Senate.

BOISE — Sen. Jim Risch and his Democratic challenger, Paulette Jordan, both have come out with TV ads seeking to tie their opponents to Washington, D.C., and stress their own bona fides as authentic Idahoans.

Both ads feature lush, color images of the candidate in Idaho carrying or shooting a gun. Grim black-and-white photos from Washington, D.C., make points about their opponents.

“Both Risch and Jordan are trying to make this appeal to Idaho voters that they know them, they are them, and that they can represent them better because of that,” Kettler said.

Risch’s ad, which has been in heavy rotation in Boise broadcast TV markets since September and also is running around the state, opens with a bleak black-and-white composite image of Joe Biden, Nancy Pelosi, Chuck Schumer and Bernie Sanders, as Risch decries how “the liberals in Washington, D.C., want bigger government, higher taxes and more spending—they’re wrong.”

Then it shifts to color images of Risch with a tractor and a flag in the background, followed by scenes of Risch working on his ranch, clad in camouflage and carrying a shotgun, and talking with hard-hatted workers inside a plant, as he espouses “our values” and “the American dream.”

Jordan’s ad started running online the final week of September and began airing on broadcast and cable TV in Boise this week, with plans to expand around the state. It opens with a scenic image of Jordan in her hometown of DeSmet in North Idaho, where she says residents have been “left behind by the elites who control politics.” She readies a saddle, rides a horse, and talks with people in a barn before shifting to a black-and-white photo of an unsmiling Risch, whom she says “somehow made himself a multimillionaire and then became one of the richest members of the Senate.”

It then switches back to scenic color images of Jordan out in a field, where she says, “I’m going to fight to give every Idaho family a fair shot, and I’m a pretty good shot,” before firing a handgun multiple times at a target.

Neither ad makes many factual claims, but Jordan’s statement about Risch’s wealth seems to imply, without saying so outright, that there was something unsavory about how Risch became one of the wealthiest members of the Senate.

“When I first watched it, I actually thought that the wording was insinuating that he became one of the richest members while in the Senate, which is not what it is,” Kettler said.

When Risch first joined the Senate in 2009 he ranked as its 13th-wealthiest member, with a minimum net worth, based on required financial disclosures, of $19.29 million, according to Roll Call’s “50 Richest Members of Congress” analysis. In Roll Call’s most recent update to that list in 2018, Risch ranked as the 32nd wealthiest member of Congress with a minimum net worth of $15.6 million.

Risch is well-known in Idaho as a self-made millionaire who built a fortune as one of the state’s most successful trial lawyers while also building a political career as a longtime state senator from Boise. He used hundreds of thousands of dollars of his own money to bankroll his first run for statewide office, when he defeated then-Lt. Gov. Jack Riggs of Coeur d’Alene in the GOP primary in 2002.

According to Roll Call, much of Risch’s wealth is in the form of farm and ranch land in southwestern Idaho, valued at $13 million.

“The phrasing of it is insinuating that there’s something to be concerned about here,” Kettler said. “Often effective attack ads are going to do that, find a way to present something in a very concerning manner. Maybe on the face of it it is true, but you’re misconstruing it in a way that it seems wrong or concerning.”

Jordan’s campaign spokeswoman Autumn Monteau said the overall message the ad is intended to convey is, “Retire Risch, he’s been in Washington too long and has forgotten about Idaho,” while Jordan is “a born and raised Idahoan familiar with the needs of Idaho families as a working mother and businesswoman.”

Jordan is a former two-term state representative and former member of the Coeur d’Alene Tribal Council who was the Democratic nominee for governor of Idaho in 2018; she lost to current Republican Gov. Brad Little.

Risch is a former 11-term state senator, lieutenant governor, and governor for seven months whose first elected office was Ada County prosecuting attorney in 1970; he's seeking a third six-year term in the U.S. Senate. Risch, originally from Wisconsin, moved to Idaho as a college student and stayed.

Risch’s campaign spokeswoman, Rachel Burkett, said of the Risch ad, “Its message conveys Sen. Risch’s conservative philosophy, voting record, and his work on behalf of Idahoans. There is a clear choice in this election: Our opponent is a liberal Democrat, and Sen. Risch is a conservative Republican. Idaho voters can choose who they want representing them in the Senate.”

Kettler said Risch’s ad is effective, in that it grabs viewers’ attention with its initial negative message, “and then you move into that contrast with what he’s working on, that he’s a regular Idahoan, perhaps, out working in the field.”

Risch talks in the ad about fighting for property rights, to preserve the 2nd Amendment, for “less government and more freedom” and “lower taxes and more jobs.”

Risch does have a conservative voting record that has drawn him endorsements from groups like the National Rifle Association and the U.S. Chamber of Commerce; his campaign also cited his work as former chair of the Senate Small Business Committee and in establishing the Idaho Women’s Business Center.

Not mentioned in the ad is the fact that Risch is the current chairman of the Senate Foreign Relations Committee, a powerful position in which he deals with the nation’s relationships with foreign powers.

Jordan’s ad also is effective, with its scenic appeal and its “potentially effective attacks on Risch … especially knowing that people don’t love what’s happening in D.C.,” Kettler said. “But I do wonder if she needed to do more on her, who she is, those kinds of traditional introduction ads.”

Neither candidate’s ad includes much introductory information, she noted, perhaps because both believe they already have sufficient name recognition in the state due to their past runs for statewide office. Jordan's run for governor drew national attention as she was the first female Native American major-party nominee for governor.

The inclusion of Jordan shooting a gun in her ad makes for an eye-catching ending, which Kettler said could also send the message that Jordan differs from national Democrats in her positions on gun control.

“She’s saying, ‘Yes, I’m a Democrat, no, I’m not trying to take your guns away,’” Kettler said, while also demonstrating she’s a “regular Idahoan” involved in outdoor activities.

Monteau said Jordan grew up hunting and shooting firearms in rural Idaho from a young age, and holds an enhanced concealed carry permit.

Kettler noted that Idaho is heavily Republican, with the GOP currently holding every seat in its congressional delegation, every statewide office, and more than 80% of the seats in the state Legislature.

“Even when a campaign ad is really effective, when you’re looking at the numbers in Idaho, I don’t know how much it’s going to get you,” she said. “But I do think that they’ve done probably a pretty effective job of identifying the kind of effective ads that can resonate against Risch,” while also trying to counter attempts at “using some of those stereotypes of Democrats against her.”

“For Risch, he just needs to make sure that Republican voters go out and vote for him,” Kettler said. “He doesn’t really have to appeal across the aisle in any way. So I think it makes sense to start with the negative ad, and then reach to those conservative values. … As long as he can ensure that a substantial chunk of Republican voters will support him, he will be in good shape.”