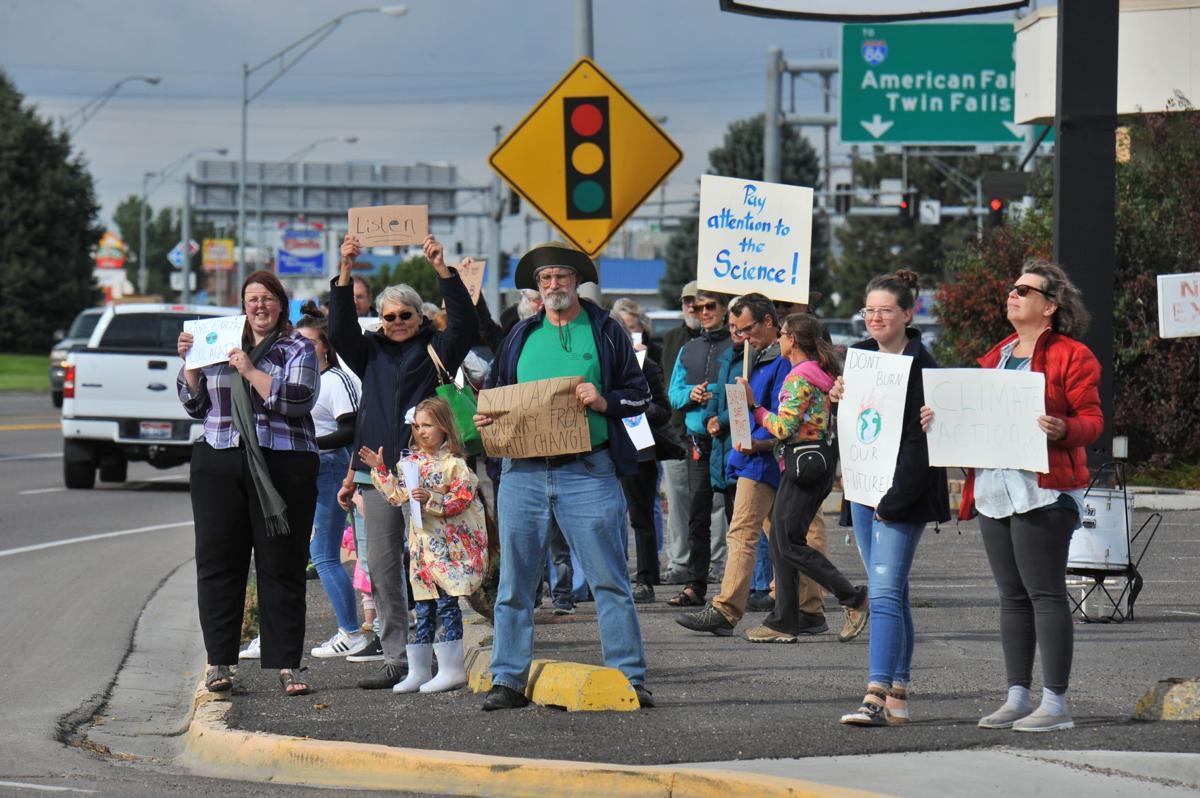 Some of the more than 100 protesters who participated in Friday’s “Global Climate Strike” outside of Pocatello City Hall. 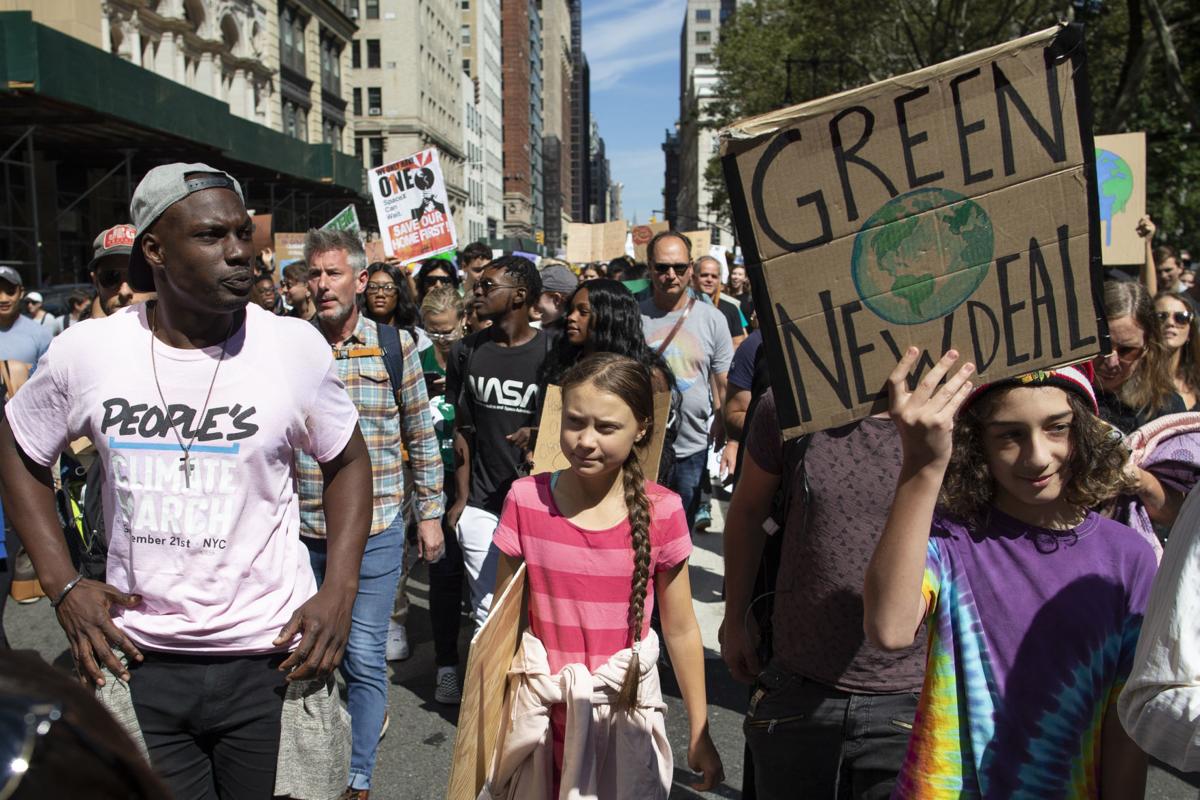 Swedish environmental youth activist Greta Thunberg, center, takes part in the Climate Strike on Friday in New York City. Rallies calling for action on climate change happened in cities around the world Friday ahead of a summit on the issue.

Some of the more than 100 protesters who participated in Friday’s “Global Climate Strike” outside of Pocatello City Hall.

Swedish environmental youth activist Greta Thunberg, center, takes part in the Climate Strike on Friday in New York City. Rallies calling for action on climate change happened in cities around the world Friday ahead of a summit on the issue.

Sixteen-year-old Aspen Denney road her bicycle to Pocatello City Hall with a sign summarizing her feelings about an international climate crisis.

Denney was among the more than 100 people who lined the busy streets near the municipal building Friday afternoon during Pocatello’s observance of a “Global Climate Strike.”

The sign she held read: “Why learn the facts when adults can choose to ignore them?”

A wave of climate change protests swept across the globe Friday, with hundreds of thousands of young people sending a message to leaders headed for a U.N. summit: The warming world can’t wait for action.

“One of the main problems with this is everyone in positions of power are old people who won’t have to deal with this sort of thing,” said Aspen Denney, who is home-schooled.

She accompanied her mother, Sunshine Denney, in striking. Her mother manages the greenhouse facilities for Idaho State University’s biology department. Sunshine Denney teaches students about native plants and the importance of maintaining biodiversity.

“We have some of the most amazing wilderness areas in the country,” Sunshine Denney said. “We have this extra ability to be stewards of these pieces of land that are still in pretty good shape.”

“The earth is in dire need of assistance. We could do more solar panels and wind turbines instead of fossil fuels,” Breuker said.

Jeff Hill, an associate professor of plant biology at ISU, believes it’s incumbent on adults to consider what the planet will be like in 2050, given that youth will have to face that reality.

“What’s been very clear as I poll my students and say, ‘What would you like to talk about in a course on biology?’ they say climate change,” Hill said.

Local artist Laura Ahola-Young, who teaches painting classes at ISU, said a lot of her work is inspired by the looming climate crisis. A friend traveled from Eugene, Oregon, to strike with her in Pocatello, believing her voice would carry more weight in a smaller community.

The local Unitarian Universalist Fellowship helped promote the local strike. Minister Jenny Peek held a megaphone and led the crowd in a chant:

Peek told the Journal, “This is really a call to action, responding to the youth.”

Marches, rallies and demonstrations were held from Canberra to Kabul and Cape Town to New York.

Events for the “Global Climate Strike” ranged from a gathering of about two dozen activists in Seoul using LED flashlights to send Morse code messages calling for action to rescue the earth to demonstrations around Australia that organizers estimated were the country’s largest protests since the Iraq War in 2003.

In Paris, teenagers and kids as young as 10 traded classrooms for the streets. The demonstration took on a festival-like feel as bands played and kids danced in a park.

Marie-Lou Sahai, 15, said she skipped school because “the only way to make people listen is to protest.”

And in Washington, several thousand young people marched to the Capitol building carrying signs reading “There is no Planet B” and “This can’t wait until I finish high school.”

“Basically our earth is dying and if we don’t do something about it, we die,” said A.J. Conermann, a 15-year-old sophomore. “I want to grow up. I want to have a future.”

The protests were partly inspired by the activism of Swedish teenager Greta Thunberg, who has staged weekly demonstrations under the heading “Fridays for Future” over the past year, urging world leaders to step up their efforts against climate change.

“It’s such a victory,” Thunberg said in an interview Friday with The Associated Press in New York. “I would never have predicted or believed that this was going to happen, and so fast — and only in 15 months.”

Thunberg is expected to participate in a U.N. Youth Climate Summit on Saturday and speak at the U.N. Climate Action Summit with global leaders on Monday.

“They have this opportunity to do something, and they should take that,” she said in the interview. “And otherwise, they should feel ashamed.”

The world has warmed about 1 degree Celsius (1.8 Fahrenheit) since before the Industrial Revolution, and scientists have attributed more than 90 percent of the increase to emissions of heat-trapping gases from fuel-burning and other human activity.

Scientists have warned that global warming will subject Earth to rising seas and more heat waves, droughts, powerful storms, flooding and other problems, and that some have already started manifesting themselves.

Nations around the world agreed at a 2015 summit in Paris to hold warming to less than 2 degrees Celsius (3.6 Fahrenheit) more than pre-industrial-era levels by the end of this century.

But U.S. President Donald Trump subsequently announced that he was withdrawing the U.S. from the agreement, which he said benefited other nations at the expense of American businesses and taxpayers.

Trump referred to global warming as a “hoax” before becoming president. He has since said he’s “not denying climate change” but is not convinced it’s manmade or permanent.

The U.N. summit is aimed at eliciting concrete proposals from various countries to make progress toward the Paris goal.

Friday’s demonstrations started in Australia, where organizers estimated 300,000 protesters marched in 110 towns and cities, including Sydney and the national capital, Canberra. Demonstrators called for their country, the world’s largest exporter of coal and liquid natural gas, to take more drastic action to reduce greenhouse gas emissions.