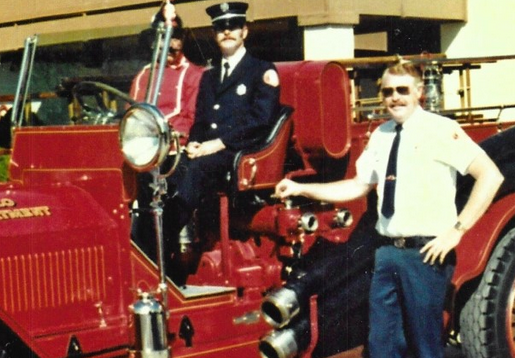 POCATELLO — George G. Bateman made certain the Pocatello Fire Department stayed on the cutting edge in its methods and training.

On three occasions, he attended fire school in Emmitsburg, Maryland, and taught the local staff what he’d learned upon returning. Bateman was just as devoted to preserving the fire department’s history, spearheading a project to restore an antique fire truck that’s now displayed inside of the Bannock County Historical Museum.

Assistant Fire Chief Travis Smith explained that in the olden days, the casket of a firefighter was hauled by a horse-drawn wagon, called a caisson. Nowadays, he said fire trucks typically serve as the caisson.

The fire department will also toll a ceremonial bell for every year of Bateman’s service — an honor usually reserved for firefighters who die in the line of duty.

Two firefighters will play bagpipes during the funeral procession and by his graveside. Firefighters in uniform will serve as his pallbearers. Smith said the department will also send three firetrucks and a pair of ambulances to escort the procession, assuming there aren’t many emergency calls at the time.

Smith explained ceremonial guidelines for honoring firefighters at their funerals haven’t been clearly codified in the state, and he’s had to do some research to ascertain what would be appropriate. He said a member of the department, Ryan O’Hearn, is working on a statewide policy to officially specify the elements of a firefighter’s funeral.

“If it doesn’t happen at the state level, we’ll definitely do them locally,” Smith said.

Bateman was born in Burns, Oregon, and moved to Lima, Montana, when he was an infant. He originally moved to Pocatello to get a job with the railroad.

His daughter, Robin Warth, said he played a lead role in fighting the large Johnny Creek fire in 1987, which destroyed 66 homes.

She said her father taught her the importance of treating people with respect.

“He’s definitely taught me a lot but a lot of it is how to treat people, to be honest and not misleading. He was always honest and upfront with people,” Warth said.

Growing up, her father always had a scanner running in the family’s kitchen so her father would be aware of any emergency calls when he wasn’t on duty. Warth remembers a day when the scanner alerted him of a medical call in the neighborhood. Her dad rushed out of the house and was administering medical aid to the neighbor before the ambulance arrived.

Warth believes her father established his legacy when he led an effort involving several other firefighters to restore a 1916 AM LaFrance pumper truck, which she and her brother road in a couple of parades.

The truck is now parked inside of the Bannock County Historical Museum. Museum director Lynn Murdoch explained the antique pumper was the Pocatello Fire Department’s first motorized apparatus, replacing fire horses. She said it remained a backup truck for the department into the 1970s, and it still runs.

Murdoch said the truck was restored for the city’s centennial celebration in 1982.

George Bateman’s wife, Jodi Bateman, recalled accompanying her husband and another firefighter on a trip to Wisconsin to pick up two new fire trucks for the department. Her husband had one of the trucks painted red, white and blue in Pocatello to match the state’s license plate.

Jodi Bateman said her husband was also a lover of trains.

She believes her husband would have been proud of the fire department’s involvement in his funeral.

“That was the one thing he wanted was to be taken to the cemetery in a fire truck and to have the guys be his pallbearers,” she said.

George Bateman was a division chief when he retired from the department.

“Every time they went in on a fire, the wives always worried,” Jodi Bateman said. “There were a few times he went into a fire and the smoke was so bad they couldn’t see very well. Sometimes they had to be talked out.”

When he retired from the fire department, Jodi Bateman drove a special education school bus for School District 25. Her husband began accompanying her on her bus route and started driving buses himself. He went on to be the transportation supervisor with the school district for a decade, retiring in 2000.