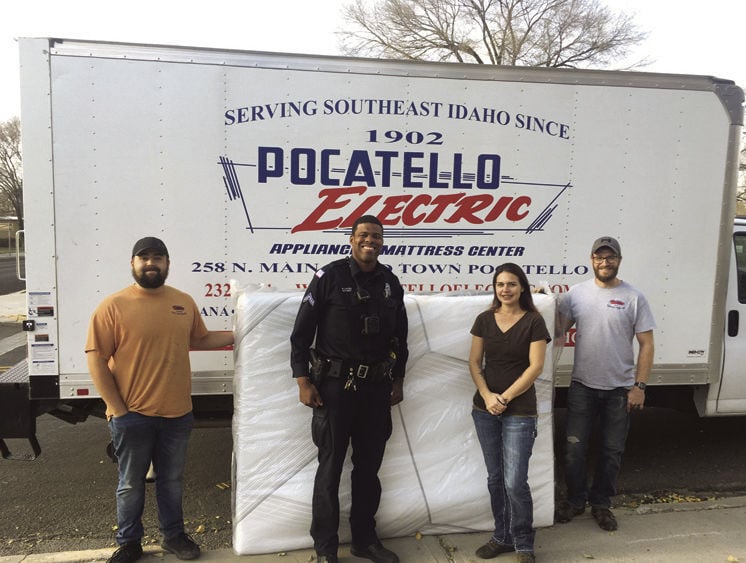 Donovan Vigliaturo, left, Sam Matkin, right, and Akila Lacey, second from left, help present a free mattress to Danielle Castor in Pocatello. Lacey won the mattress in a Pocatello Electric and Serta giveaway but chose to donate it to Castor. 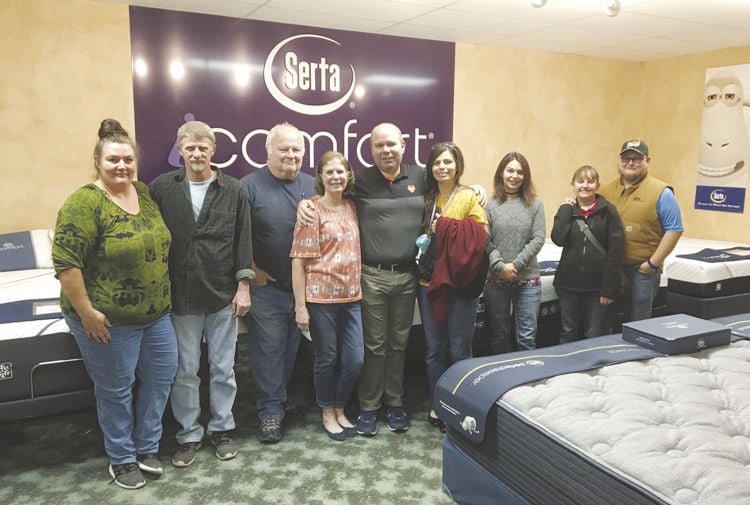 Recipients of free mattresses and box springs from Pocatello Electric and Serta, with an award nominator at center in orange, pose for a recent photo.

Donovan Vigliaturo, left, Sam Matkin, right, and Akila Lacey, second from left, help present a free mattress to Danielle Castor in Pocatello. Lacey won the mattress in a Pocatello Electric and Serta giveaway but chose to donate it to Castor.

Recipients of free mattresses and box springs from Pocatello Electric and Serta, with an award nominator at center in orange, pose for a recent photo.

POCATELLO — Mike and Suzie Vigliaturo of Pocatello Electric and Serta mattress partnered over the past months to provide free mattresses to people on the front lines of the COVID-19 pandemic.

Several local people have been chosen to receive the new mattresses and box springs.

The local recipients are Brittney Williams of Soda Springs in the health care worker category; Cpl. Akilah Lacey in the frontline worker category, which includes police, firefighters, EMTs, paramedics and military members; Vanessa VanUitert in the grocery store employee category; Chris Richardson in the teacher category; and Rob and Misty Hall in the assisted living category.

The winner of June’s mattress giveaway was Brittney Williams, a respiratory therapist at Portneuf Medical Center.

In March, Williams volunteered to go to an East Coast hospital to help out when the coronavirus pandemic was overwhelming hospitals and cases were skyrocketing.

When she returned, she had to quarantine for two weeks before reuniting with her family.

“She is just someone with a big heart and is willing to help anyone she can, without considering what it would cost her,” she said.

Pocatello police Cpl. Akilah Lacey was selected as the winner for July.

He was nominated by Pocatello police dispatcher Matthew Richards.

The nomination from Richards says Lacey is a member of the Police Department’s K-9 unit, which means he is never truly off duty and notes the many ways Lacey tries to help out in any way possible.

Lacey, however, wasn’t in need of a mattress and chose to forward the new mattress and box spring to Danielle Castor of Pocatello.

She was in need of one and received a new queen size bed through Lacey’s donation. She said she’s never had a new bed before.

“I’m kind of speechless,” Castor said. “I can hardly believe it.”

August’s mattress giveaway recipient was Vanessa VanUitert of Pocatello, a cashier at WinCo Foods in the grocery store category.

Steve Fullmer in his nomination said she is always sweet and helpful through the store.

Also, Chris Richardson, an eighth-grade Irving Middle School math teacher, says he was pleased to receive the mattress in the teacher category for September.

He says it will come in extremely handy. He and his fiancee are getting married.

“We’re going to be doing a king size on that memory foam,” he says.

They need the space.

“So when they have their nightmares (now) we’ve got plenty of room for them,” he said.

He added that he’s grateful to Pocatello Electric and Serta for sponsoring the giveaway and providing them with the bed.

Misty and Rob Hall received a mattress award as essential workers in the assisted living field. They were the final winners in the mattress giveaway, which ended in October.

Misty is a certified nursing assistant and she and Rob work together at Developmental Options. She works days and he works the swing shift.

“We were very surprised when we won,” Misty said.

They were nominated by misty’s mother, Debbie Lea, who said they’ve worked every day taking care of their patients since covid began.

Misty said she’s grateful for her mom for nominating her for the award.

“And I’m grateful for Pocatello Electric and Serta for sponsoring this and providing us with this,” Misty said.