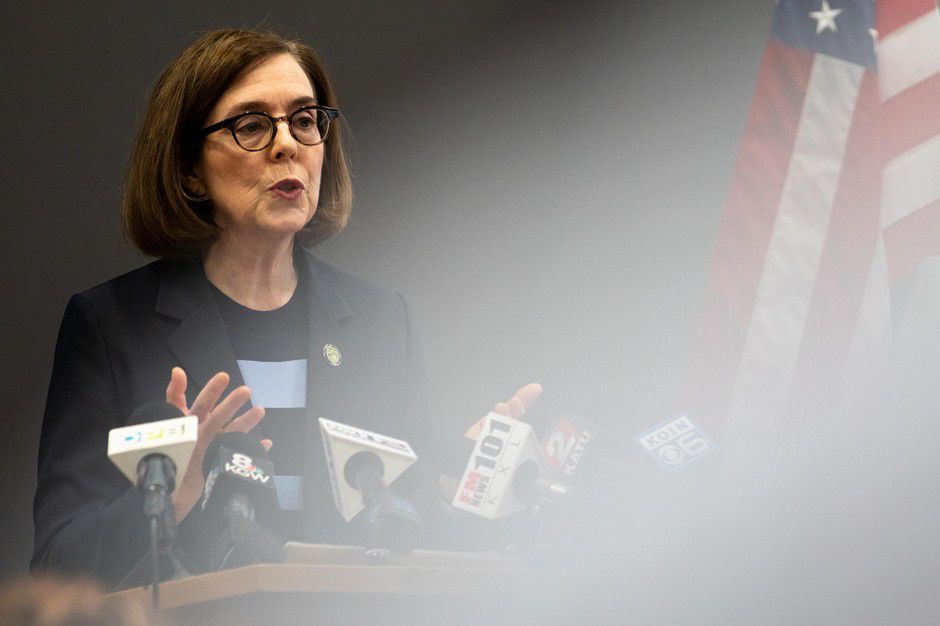 Gov. Kate Brown speaks at a press conference on March 16. Brown announced she is closing the state’s bars and restaurants and banning gatherings of more than 25 people. 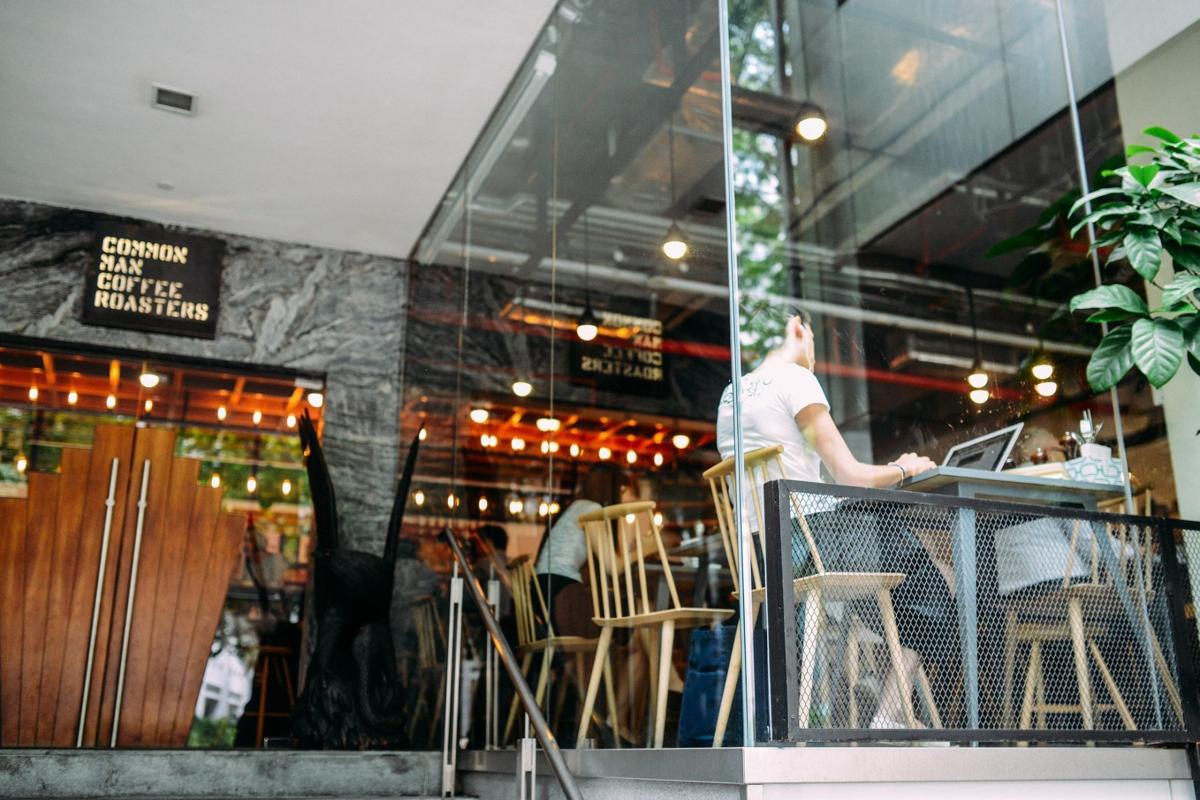 Gov. Kate Brown speaks at a press conference on March 16. Brown announced she is closing the state’s bars and restaurants and banning gatherings of more than 25 people.

Oregon Gov. Kate Brown announced Monday she is closing the state’s bars and restaurants and banning gatherings of more than 25 people, in the latest set of drastic actions meant to curb the spread of the coronavirus.

Restaurants can continue take-out and delivery options and the prohibition on gatherings will have an exemption for grocery stores and retail outlets. The ban starts Tuesday and is scheduled to last at least four weeks.

She also urged Oregonians to avoid gatherings of more than 10 people.

“It may seem like we’re in the middle of this, but in terms of timeline and impact we are really just in the beginning,” Brown said.

She added: “There’s no vaccine. There’s no medicine for coronavirus. And we know the virus is in our communities. The only thing we know to do is slow the transmission through social distancing and expand and support hospital capacity to support the sick. Guidelines on social distancing is a matter of life and death.”

The governor had initially hesitated to close bars and restaurants. Brown said her initial reluctance was partly informed by a conference call she held with hundreds of elected officials on Sunday.

“Particularly in our rural communities, restaurants are a key provider of meals to a lot of the elderly and vulnerable folks,” Brown said. “We are taking these concerns seriously as we develop policy.”

As of Sunday afternoon, Oregon had a total of 39 reported cases of the novel coronavirus, with new cases in Yamhill, Deschutes and Linn counties.

According to the Oregon Health Authority, the Yamhill and Deschutes cases are believed to be community acquired.

The Linn County case is a staff member at the Oregon Veterans’ Home in Lebanon, which has nine residents who have tested positive as of Sunday afternoon. The staff member has remained in isolation in accordance with infection prevention protocols and public health guidelines, according to the OHA.

The Oregon Department of Veterans’ Affairs and the OHA are prioritizing testing for residents and staff at the Veterans’ Home.

Ten of the state’s 39 cases are linked to the Veterans’ Home in Lebanon.

There were 182 pending COVID-19 tests in Oregon as of Sunday afternoon.

More than 60 people have died of the virus in the U.S. Most of those deaths have been in the Seattle area.

Oregon’s first death from COVID-19 in Multnomah County Saturday – the person was a 70-year-old man who was being treated at the Portland Veterans’ Affairs Medical center.

The novel coronavirus, a relative of other viruses like SARS, was first identified in Wuhan, China, late last year.

Oregon Gov. Kate Brown announced late Thursday that all K-12 public schools in the state of Oregon will be closed through the end of March. That came just a day after her ban on public gatherings of more than 250 people for four weeks.

“I want to be very clear: sending Oregon children home will not stop the spread of the coronavirus,” Brown said in a statement. “While children are home, when at all possible, they should not be in the care of older adults or those with underlying health issues that are most at risk from COVID-19.”

Brown also granted a request from Oregon Attorney General Ellen Rosenblum to immediately declare an “abnormal disruption of the market” in the state. The declaration allows Rosenblum to take legal action against any business or online vendor that resells essential goods with a price hike higher than 15 %.

In a letter to the governor, Rosenblum said her office has been hearing from consumers about overpriced items, like toilet paper and hand sanitizer.

“During this COVID-19 public health emergency, I want Oregonians to know that my office is open for business, and we want to hear from Oregonians as to what is going on in the marketplace,” Rosenblum wrote.

“I will have a zero tolerance policy toward offenders. If you’re putting our community at risk to make a buck during a time of crisis, in addition to rotting in hell, you’ll face the full weight of the legal power granted to me by the people of Oregon,” Hummel said in a statement.

Willamette Week reports that its print circulation has been slashed in half from 50,000 to 25,000 newspapers, citing that readers are less likely to pick up the paper in bars or venues amid the coronavirus outbreak.

“We will ramp back up when it makes sense, and when people are attending the places we distribute,” said editor and publisher Mark Zusman.

According to Willamette Week, many reporters continue to work from home.

For the Portland Mercury, some reporters were temporarily laid off Saturday with the publication switching to an online-only format.

“We’ve temporarily laid off 10 members of our beloved staff,” Steven Humphrey, the editor-in-chief of the newspaper, wrote in a blog post.

Humphrey said the paper has the intention of “eventually bringing everyone back.”

“Will the Mercury be back in full force after all this has returned to normal? I think so. I hope so,” Humphrey wrote.

The ACLU of Washington and the Northwest Immigrant Rights Project filed a lawsuit Monday, seeking the release of U.S. Immigration and Customs Enforcement immigration detainees at high risk for contracting the COVID-19 disease.

The lawsuit was filed on behalf of detainees at Northwest Detention Center in Tacoma, Washington.

People in custody are at heightened risk for contracting illnesses because they’re in a confined place and efforts like social distancing are not possible, or far more challenging.

The groups called on ICE to release people who are most vulnerable, including those with underlying health conditions.

“Immigrant detention centers are institutions that uniquely heighten the danger of disease transmission,” said Eunice Cho, senior staff attorney at the ACLU’s National Prison Project. “In normal circumstances, ICE has proven time and again that it is unable to protect the health and safety of detained people. These are not normal circumstances, and the heightened risk of serious harm to people in detention from COVID-19 is clear.”

Last week, ICE suspended all social visit at its detention facilities, nationwide. On Friday, the agency said there were no detainees in ICE custody with confirmed cases of COVID-19. The agency declined to say how many detainees received tests.

Since fears of the Coronavirus have set in, Oregonians have been stocking up on soap, nonperishable food and a lot of toilet paper. But at the Gun Room in Southeast Portland, owner Shaun Lacasse said they’re also buying so many guns the Oregon State Police background check system can’t keep up.

Normally a background check to buy a firearm takes about 10 minutes. Oregon State Police said they don’t have updated numbers for how many background checks they’ve run this past week. But according to multiple gun stores, the wait time for a background check was up to two hours. Other times, the computer system simply didn’t work.

“I’ve been here my whole life doing this,” said Lacasse, whose father opened the store in 1965. “I’m 52 years old, I grew up behind this counter. I’ve never seen anything like yesterday.”

Most of the crowd, he said, were first time buyers. And more than a few were nurses and doctors.

Asked what he thought people were scared of, Lacasse answered half joking, “Everything. They’re buying guns and ammunition so they can go home and sit on their couch and defend their stash of toilet paper from the pending apocalypse.

“And most of them are saying they’re gonna go hit the liquor store when they’re done getting their guns,” he added.

Ultimately, he said, most of the people are buying a weapon to feel better in uncertain times.