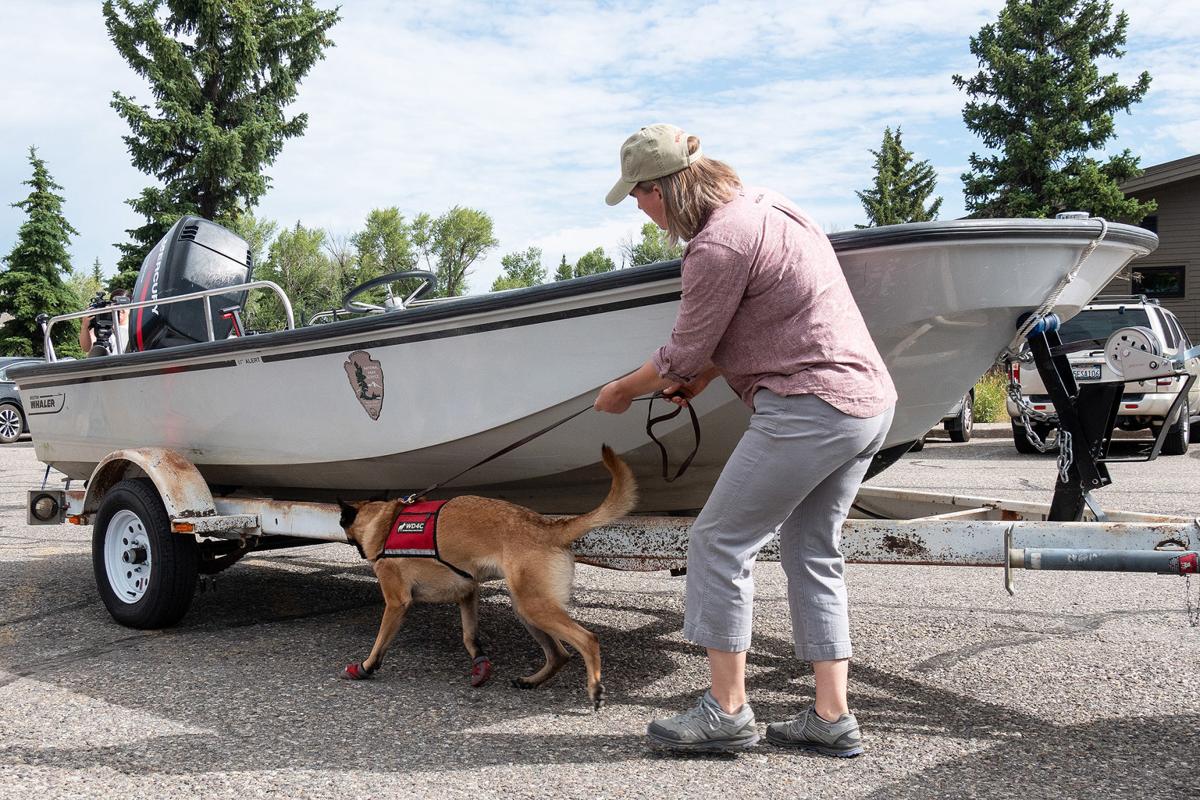 Jax, a 3-year-old Belgian Malinois, sniffs a boat for aquatic invasive mussels at a watercraft check station on Tuesday in Grand Teton National Park. Holding the leash is his trainer Aimee Hurt of Working Dogs for Conservation. 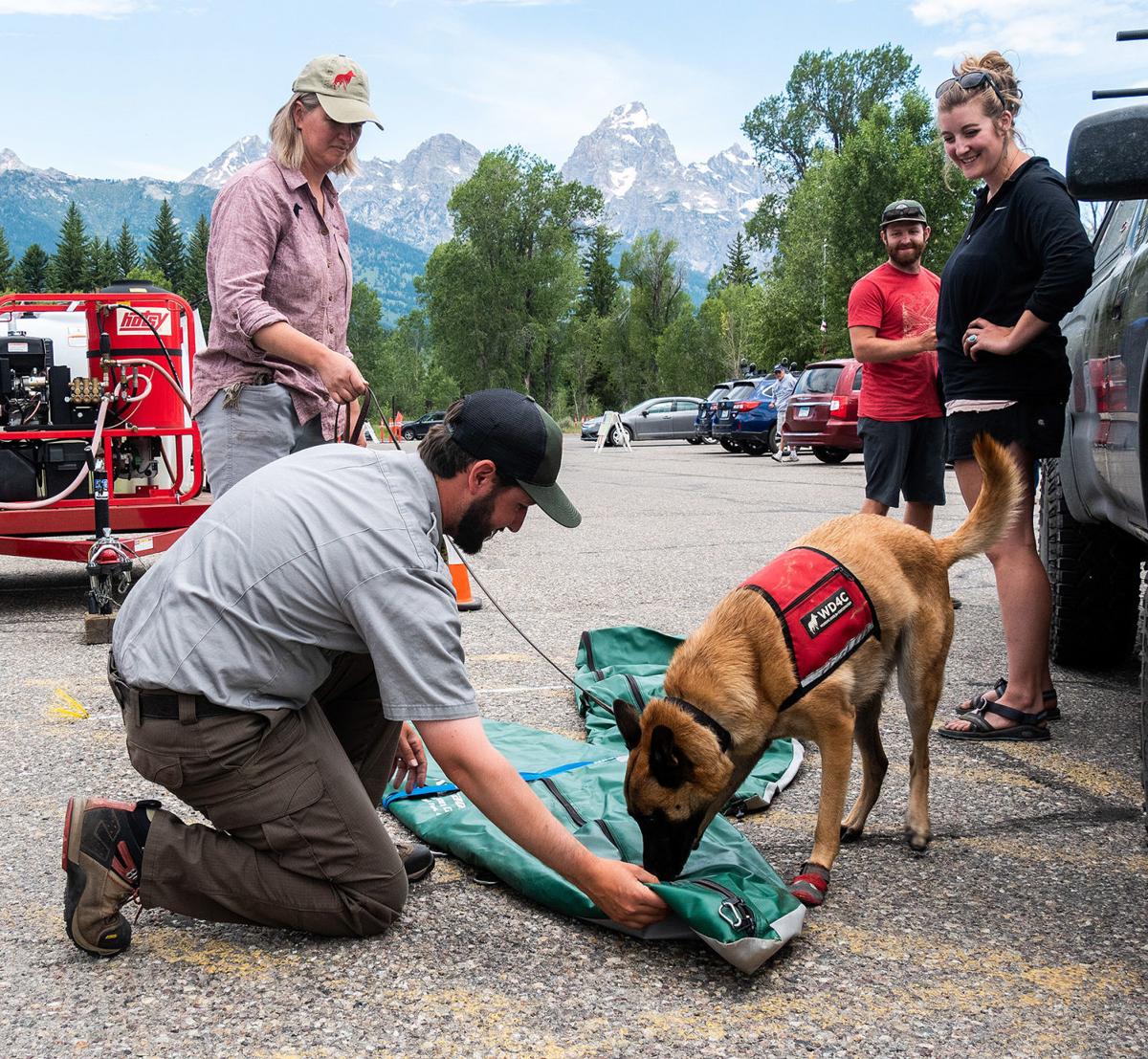 Jax, a 3-year-old Belgian Malinois, sniffs a boat for aquatic invasive mussels at a watercraft check station on Tuesday in Grand Teton National Park. Holding the leash is his trainer Aimee Hurt of Working Dogs for Conservation.

MOOSE, Wyoming — Jax was a happy dog Tuesday because he found what he was looking for and that meant his favorite reward.

For Jax, a 3-year-old Belgian Malinois, it was a game. For the national park wildlife biologists checking for aquatic invasive species on incoming boats, it was serious business.

Demonstrating Jax’s well-trained nose at the mandatory watercraft check station for Grand Teton National Park outside the Moose Post Office, Aimee Hurt started Jax at the front of a national park boat. The dog began sniffing and worked his way down the length of the boat until he arrived at the outboard motor. He sniffed around it and suddenly changed his posture like a proud and excited student. He sat upright, wagged his tail and looked at his trainer. His treat was to play with his two toy balls. He dived on them with gusto. Hurt also heaped praise on Jax for finding the target.

“This toy is his reward,” Hurt said.

What Jax found was a tiny, plastic vial about half the size of a pinky finger with several immature exotic mussels inside of it. Park wildlife technicians planted the vial to show off the dog’s abilities to detect the invasive species.

Officials are working hard to keep invasive zebra and quagga mussels out of park waters. The mussels are small, fast-reproducing and can encrust everything they attach themselves to. Immature mussels can be the size of a pinhead, making them hard to detect. So far, the closest infected western waters are Lake Powell.

“If we go to containment (of the mussels), the cost grows exponentially,” said park fisheries biologist Chad Whaley talking about why they work so hard to keep the mussels out. “Some infected lakes require washing as boats leave the boat ramps.”

“Invasive mussels alter the dynamics of native ecosystems where they are found and have the potential to disrupt industrial, municipal, and recreational water uses,” the Invasive Mussel Collaborative website said.

Zebra mussels and quagga mussels were transported to the Great Lakes region through ballast water discharge from ocean-going ships. Since their arrival, they have spread from the Great Lakes throughout North America, as far as the Hudson River in the east and Lake Mead in the west, the website said.

Hurt and Jax are part of the organization Working Dogs for Conservation based in Missoula, Montana. Besides exotic mussels, Jax is trained to find bobcat scat, kit fox sign and black-footed ferret sign — endangered animals conservationists are working to restore. Working Dogs for Conservation also has a dog-sniffing team in Yellowstone National Park and will work eight total parks and sites this year. The value of the dogs was demonstrated when they stopped three different infected boats in Canada.

The park preaches “Drain, Clean and Dry” to stop aquatic invaders. If mussels are suspected on a watercraft, check stations are equipped with a spray apparatus to blast the boats clean.

Many of the high-energy dogs in Working Dogs for Conservation program come from animal shelters around the country as youngsters and are often not suitable for adoption. They start training young and learn to identify several scents in their first years. Hurt said Jax is expected to continue to learn more scents. Jax was at one time being trained for the Army Green Berets but washed out after an injury, Hurt said.

During the course of the day, many boaters stopped at the check station to talk to a park biologist and have their boats cleared. Park biologist Mike Canetta, clipboard in hand, cheerfully chatted with visitors and checked out their watercraft, everything from large fishing boats to paddleboards. Sometimes the line of cars would back up to four deep.

“For some of these people this is their third time since entering the state to be inspected,” Canetta said. “They’re getting tired of it. But people are happier in line when there’s a dog.”

Most people were all smiles when Jax appeared, ready to sniff their boat. He often paused to receive pets from strangers. Hurt would leave a card with boaters with Jax’s photo and the words “You have been sniffed! Jax,” including a mini bio of the dog.

Jax and Hurt will continue working at the park through Aug. 2. After that, they’re off to Arizona to search out black-footed ferrets for wildlife conservationist project.