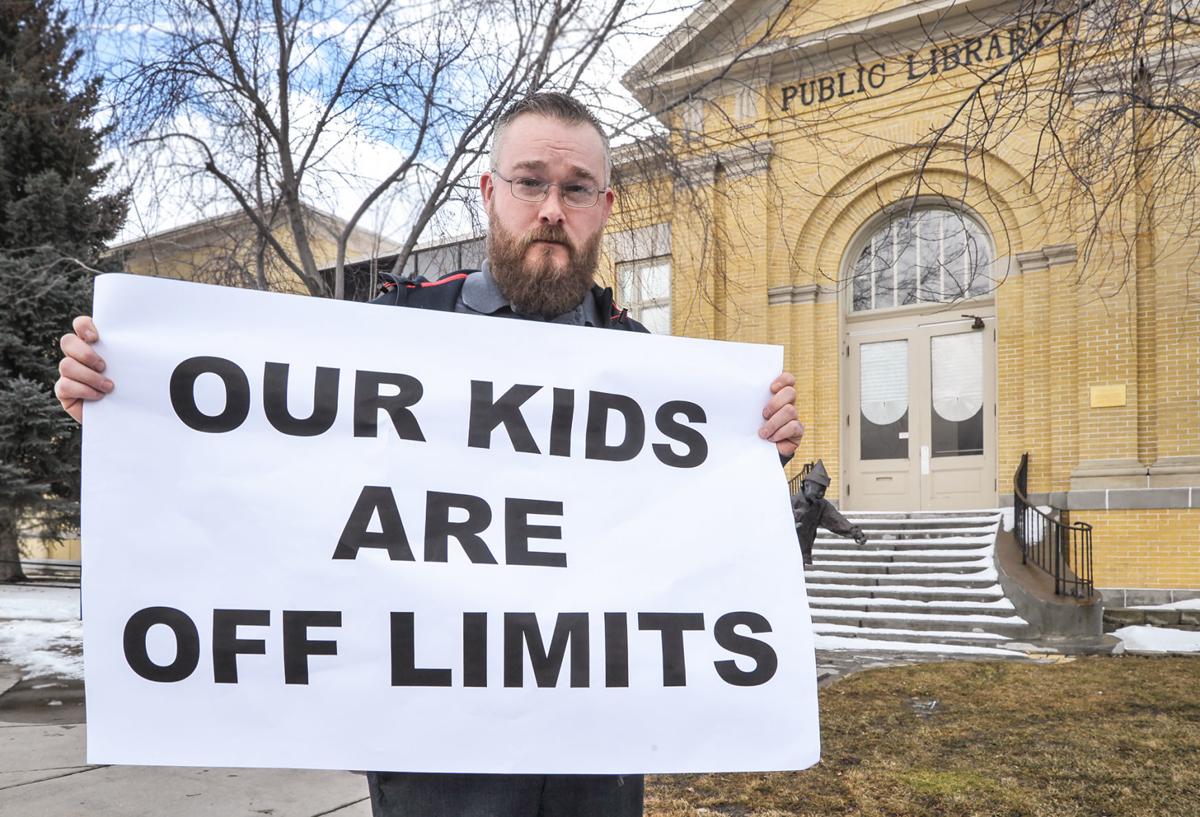 Local resident Ted King spoke out at a recent Pocatello City Council meeting against a program that involves drag queens reading books to Gate City area children at the Marshall Public Library. King now says that widespread support for the program on social media has caused him to end his campaign to stop it. 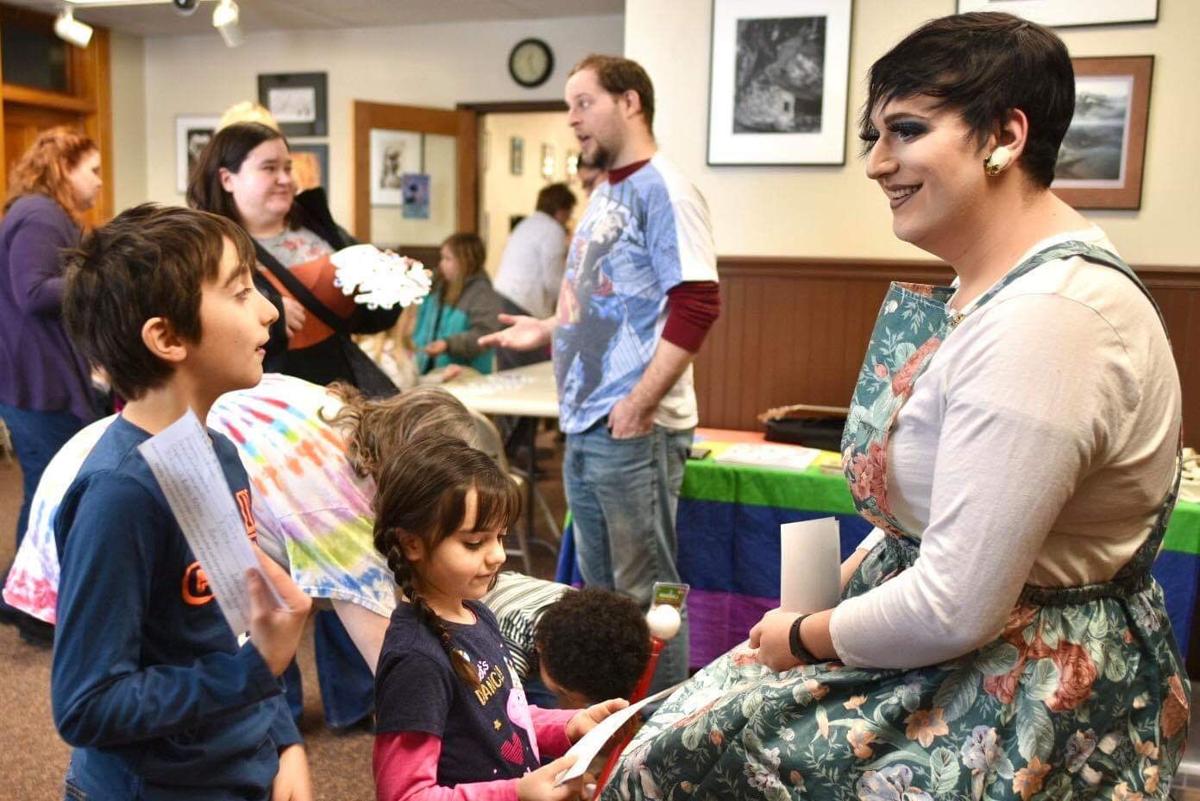 Cali Je, right, leads Reading Time with the Queens at the Marshall Public Library in Pocatello.

Local resident Ted King spoke out at a recent Pocatello City Council meeting against a program that involves drag queens reading books to Gate City area children at the Marshall Public Library. King now says that widespread support for the program on social media has caused him to end his campaign to stop it.

Cali Je, right, leads Reading Time with the Queens at the Marshall Public Library in Pocatello.

POCATELLO — A local man says he no longer plans to lead an organized campaign against a voluntary monthly program at the Marshall Public Library that involves drag queens reading books to Gate City area children.

Pocatello carpenter and founder of the group Citizen Patriots United Ted King said he’s changed his mind about lobbying against Reading Time with the Queens based on overwhelming public support for the program on social media.

King told the Pocatello City Council during its meeting last Thursday at City Hall that he had created a petition on Change.org and had organized an oppositional attendance to the next scheduled Reading Time with the Queens, set for 11:30 a.m. Saturday at the library.

But this week King told the Idaho State Journal that, although his beliefs have not changed, interactions with people on social media made it clear to him the reading program has more widespread support than he initially believed, and that it made the most sense for him to end his opposition.

“I never, ever imagined that my opposition would lead to the hatred and vitriol that followed,” King said. “I should have known more about the program before I tried to silence it because I had no idea they had this level of community support.”

The Pocatello resident who started Reading Time with the Queens in 2017, Joseph Crupper, who is also known locally by his alter ego Cali Je, attended last Thursday’s City Council meeting, though he did not make a formal statement. Crupper told the Journal last month that in addition to reading stories to children while dressed in drag, the program involves craft making, sing-along sessions and rewarding children for reading with dollar store prizes.

King told the Journal last week it’s his belief that because the library is a publicly funded Pocatello department, groups with political affiliations or associations should be prohibited from using the library to further their agendas. King said that for him, a program that involves drag queens reading stories to children promotes LGBTQ ideals, and he associates those values with liberal political ideology.

Additionally, King said he has a 4-year-old son who is impressionable. King said he believes drag queens reading to children will make them more susceptible to encountering gender dysphoria, which involves a conflict between a person’s physical or assigned gender and the gender with which he/she/they identify, according to the American Psychiatric Association.

“These drag queens are talking to kids that are just learning gender structures and barriers between boys and girls, and when they see somebody who just bucks that structure, how confusing is that to them?” King said last week. “They haven’t even learned one plus one is two yet. If it’s really about promoting a love of literacy in children, then why the drag? Why the controversy? Mr. Rogers did a fantastic job to promote literacy and self-love wearing a red cardigan sweater and Keds.”

King had announced plans to attend the Reading Time with the Queens program at the library on Saturday and sought out the Pocatello City Council last Thursday to consider “legislation that is non-discriminate but prevents political, ideological or religious groups from presenting at a public library.”

In a phone interview with the Journal last week, King said, “You can do what you want where you want but not at a place where more than 60 percent of the people who pay for the building don’t agree with it.”

Some of the rationale for ending his opposition is that King said it was clear to him that support for Reading Time with the Queens far outweighed the opposition, with King citing the results of recent online opinion polls as evidence.

From Tuesday to Thursday of last week, King’s petition against Reading Time with the Queens garnered a total of 453 signatures.

“After I announced my opposition, supporters started a petition of their own and within 20 or 30 minutes they had 100 percent more signatures than we did,” King said.

Pocatello resident Cassie Ashdown created the petition asking for signatures of people in favor of Reading Time with the Queens last Thursday and by Saturday it had attracted over 1,000 signatures. As of Monday afternoon, the petition in support of the reading program, also created on Change.org, had reached nearly 1,400 signatures.

“I am not some crusader who was trying to silence something that our community stands so strongly behind,” King told the Journal. “I am nowhere arrogant enough to speak against the majority of the community saying something like, ‘Well, I don’t like the program so it can’t happen.’ The community overwhelmingly supports the program and I believe in a constitutional republic. I don’t believe in silencing the voices of the many based on the opposition of a few.”

According to a recent Idaho State Journal poll, nearly two-thirds, or 63 percent, of the approximately 1,200 respondents supported drag queens reading to children at the Marshall Public Library.

Crupper spoke with the Journal last Thursday evening after the council meeting. In response to King’s planned opposition and petition, Crupper said, “The petition and planned opposition is not going to stop us from hosting Reading Time with the Queens. As a group, we will not let this deter us from spreading our message of positivity, community-building, self-acceptance and the importance of literacy for children.”

This week Crupper told the Journal he is aware King has no further plans for an oppositional attendance to Saturday’s reading time. Although Crupper said he had concerns about what type of opposition he would encounter, he never considered canceling the event. In fact, Crupper said that King’s sentiments resulted in an outpouring of people interested in attending Reading Time with the Queens in the future.

King is still hopeful some type of legislation preventing ideological, political or religious events at a public venue will be enacted. Meantime the Marshall Public Library cannot and will not make decisions about who can use the venue based on the content of their usage or event, Marshall Public Library Director Eric Suess told the Journal last week.

“If someone had a gun rights group who wanted to use the library meeting room and I let them do that and then someone opposed to gun rights requested to use the room and I said no, that’s a lawsuit waiting to happen,” Suess said. “I am not in a position to put the city in a liable situation based on content. It’s what’s referred to as viewpoint discrimination, which could open the city up to litigation.”

Moreover, Suess said he must operate within the legal framework of Pocatello code and cannot prevent an oppositional attendance to the planned reading time on Saturday.

While King has said he no longer plans to attend the next Reading Time with the Queens event, individuals who do intend to oppose the reading time must not be disruptive to the event, bring signs into the library or intimidate or harass any of the presenters or participants, said Suess, adding that it is within their First Amendment rights to attend the event in a non-combative capacity.

“Their speech and rights are protected as much as the people presenting,” Suess said. “If they plan to attend the event, it should be done in a way that the children can still enjoy the event, sing songs, make crafts and be read to. I am not going to tolerate any activity that prevents (the children) from being able to do that.”