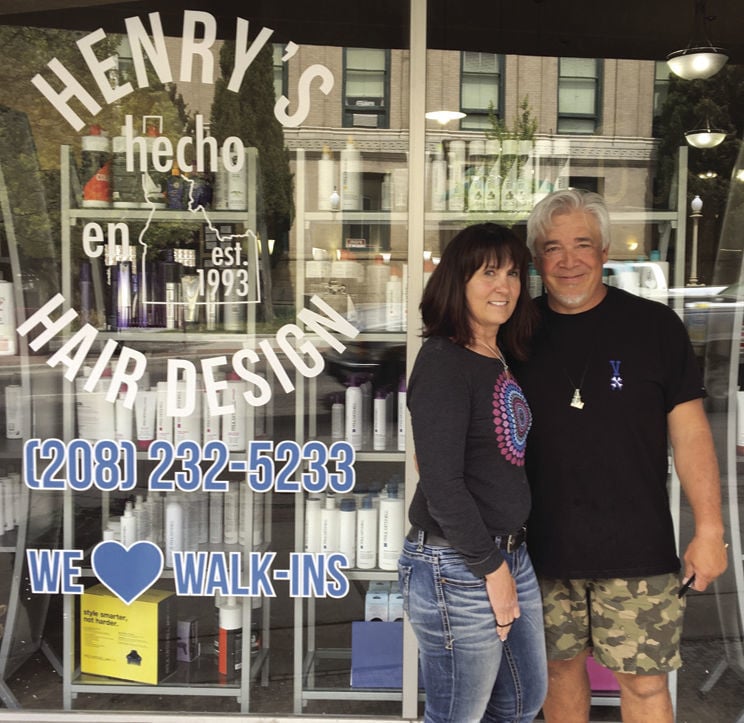 Henry Paz, right, of Henry’s Hair Design salon in downtown Pocatello, and his wife, Michelle Frasure, were pleased to have the salon open again on Saturday after it was closed for 55 days because of the COVID-19 outbreak. 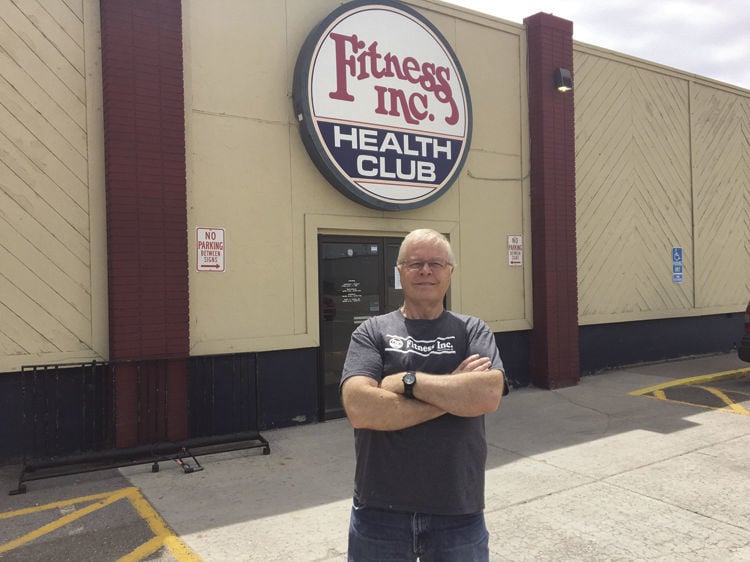 Bill Davis, who owns the Fitness Inc. gym in Pocatello, is pleased the state has allowed gyms to reopen, but he foresees difficult challenges ahead for his gym and others.

Henry Paz, right, of Henry’s Hair Design salon in downtown Pocatello, and his wife, Michelle Frasure, were pleased to have the salon open again on Saturday after it was closed for 55 days because of the COVID-19 outbreak.

Bill Davis, who owns the Fitness Inc. gym in Pocatello, is pleased the state has allowed gyms to reopen, but he foresees difficult challenges ahead for his gym and others.

Paz said that Henry’s Hair Design in Old Town Pocatello has been overwhelmed with phone calls and clients seeking appointments since Idaho allowed hair salons to reopen on Saturday.

Paz said they didn’t have their entire crew of employees back and he wasn’t sure what to expect after reopening.

Hair salons had been previously shut down temporarily because they weren’t considered essential during the COVID-19 pandemic in Idaho.

Things went well with everyone back. Still, there’s some cause for concern in the future, he said.

He said both issues are cause for concern, but he has more pressing concerns for the moment.

“Trying to stay safe, that’s the biggest thing,” he said.

While hair salons were considered non-essential, you wouldn’t know it from listening to their customers who stopped into the business at 151 S. Arthur Ave. in Pocatello on Saturday.

On Saturday they held a soft opening. On Monday the salon was busy for the salon’s stylists, esthetician, nail tech and massage therapist.

Paz says a lot of people were there to catch up on their grooming.

“A lot of growing out, a lot of beards and a lot of long hair,” he said.

Some customers preferred they not show any gray hair.

But he said they were busy and it was fun to begin feeling like things were starting to get back to normal.

“You miss the camaraderie we have in the salon,” he said.

A lot of clients were saying that they also had missed the socializing, he said.

Further, Paz said their opening was aided because they managed to retain their staff despite the lack of income during the 55 days that the salon was closed.

But the monetary losses were noticeable.

Still, Paz said people need their hair cut and colored and cared for.

“We’ve got a pretty big operation,” he said.

He says it’s good to be able to put his employees back to work and once again earning paychecks.

“It’s a lot for those young families,” he said. “They were suffering.”

Staff members managed to get unemployment and make use of the CARES Act to help tide them over.

“That helped my younger staff,” Paz said. “It all helps.”

The salon also benefited from federal programs, such as the Payroll Protection Program, or PPL.

It helped lessen the financial impact and bring back all the employees.

That’s something,” Paz said. “You know you need money to bring all your employees back. It’s a huge thing to cover what we lost.”

It was hard to be off all that time, too. But it was necessary.

“I think ... safety was the right thing to think about,” Paz said.

With the pandemic it’s hard to know what the future will bring. But his business will take all the steps they can to ensure the safety of clients and employees.

Paz said the state’s leaders had to make tough decisions.

“Not everyone is going to agree with them,” he said. “You know you’ve got to try to conform little, I mean for safety.”

His wife, hair stylist Michelle Frasure, said she was getting restless and thinks others were, too.

“It’s just been hard to be off,” she said, adding she missed her clients.

So it’s been good to be back at work and hear all the chattering and activity in the salon, she said.

Paz adds that it’s been a blessing to live in the Pocatello area during the pandemic.

“We’re lucky we live in a community this size,” he said. “It’s crazy how many people have reached out. You know, ‘Hey, do you guys need help? What do you need?’”

He said individuals and companies also bought gift cards that helped them get through the shutdown.

But Davis, owner of one of the state’s largest fitness centers, expects tough business conditions for several months despite the loosening of rules.

Davis — who has owned Fitness Inc. at 1800 Garrett Way for 30 years — says there are lots of headwinds.

Davis noted the gym has reopened at an inopportune time. Most people get gym memberships between January and March, he said.

By the time spring rolls around, a lot of people are moving on to outdoors activities such as fishing, golfing, camping and yard work.

“So they’re not going to come in to the gym as much,” he said. “Being in the gym is kind of secondary.”

So all the gyms in the Pocatello area are going to be hurting for a while until everybody starts spending money again.

“And that’s not going to happen until they get back to doing what they usually do,” Davis said. “It’s kind of a vicious circle.”

He says even when the gyms are closed they still have expenses.

“You can’t just shut everything totally down,” he said. “The bills keep coming.”

Still, the gym hasn’t been billing members since they couldn’t get into the gym during the lockdown.

“We didn’t think it was right to bill our members if they couldn’t get through the doors,” he said.

Furthermore, job losses could impact Fitness Inc. — which has the largest racquetball facility in the state — and other gyms.

“A lot of the people who got laid off are going to want to stop their memberships,” Davis said.

“The gyms in the area are going to have to survive or die,” he said.

Prior to the shutdown due to the pandemic, Fitness Inc. was doing fine financially.

“You never do enough business but we were doing OK,” he said.

But it’s an uphill battle if people have lost their jobs.

“Food and other bills tend to get paid first,” Davis said.

The gym, which is sanitized per recommendations, was 10 years old when he and his wife, Nancy, bought it.

“We’ve done an awful lot to the gym to make it what it is today,” he said.

The gym even offers a nursery at $2 an hour for moms who want to exercise.

But the pandemic is not something they would have ever guessed would happen.

“We’re totally depending on our customers staying with me,” Davis said.

And some customers are waiting to see if they get laid off or get their jobs back.

“They’re not going to be spending extra money for anything,” he said.

Davis expects the slump for gyms to last a while due to the nature of the pandemic. He says there’s no way to predict tomorrow.

“It will be a tough stretch,” he said.

Meanwhile, he said that Fitness Inc. is working on restoring exercise classes and pool classes.

The whole thing puts Fitness Inc. and other gyms in a peculiar quandary.

“You’re trying to do business and limit it at the same time,” Davis said.