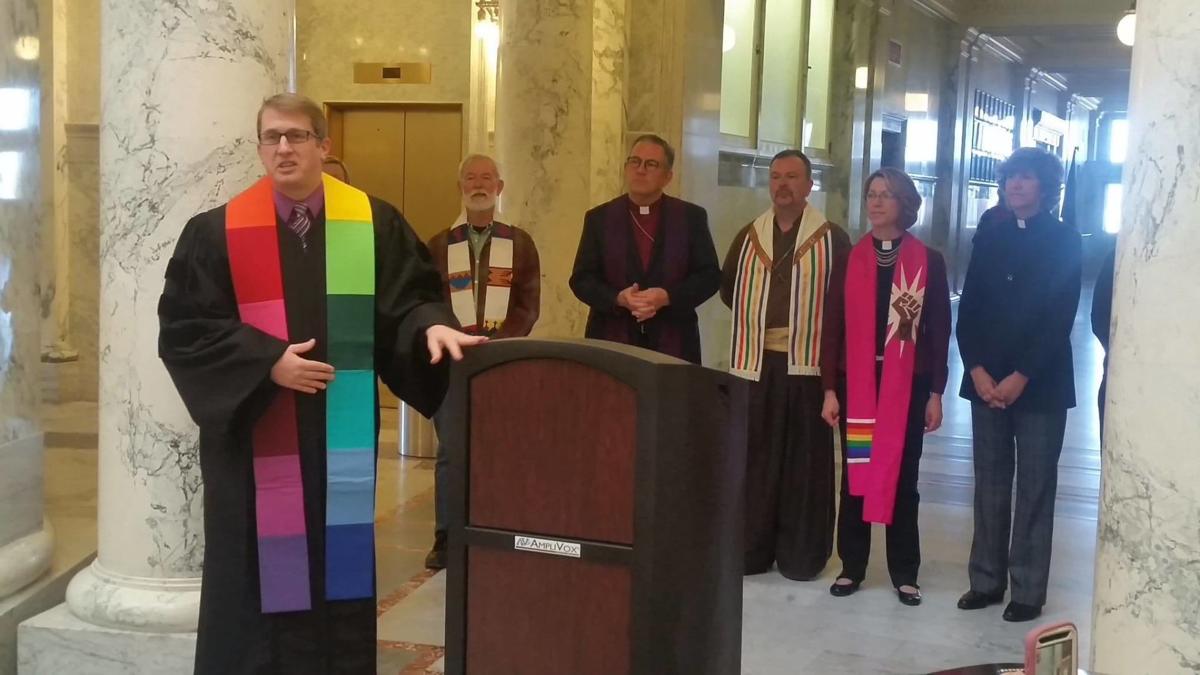 The Rev. Andrew Kukla speaks at an Add the Words press conference at the Idaho Capitol on Wednesday. 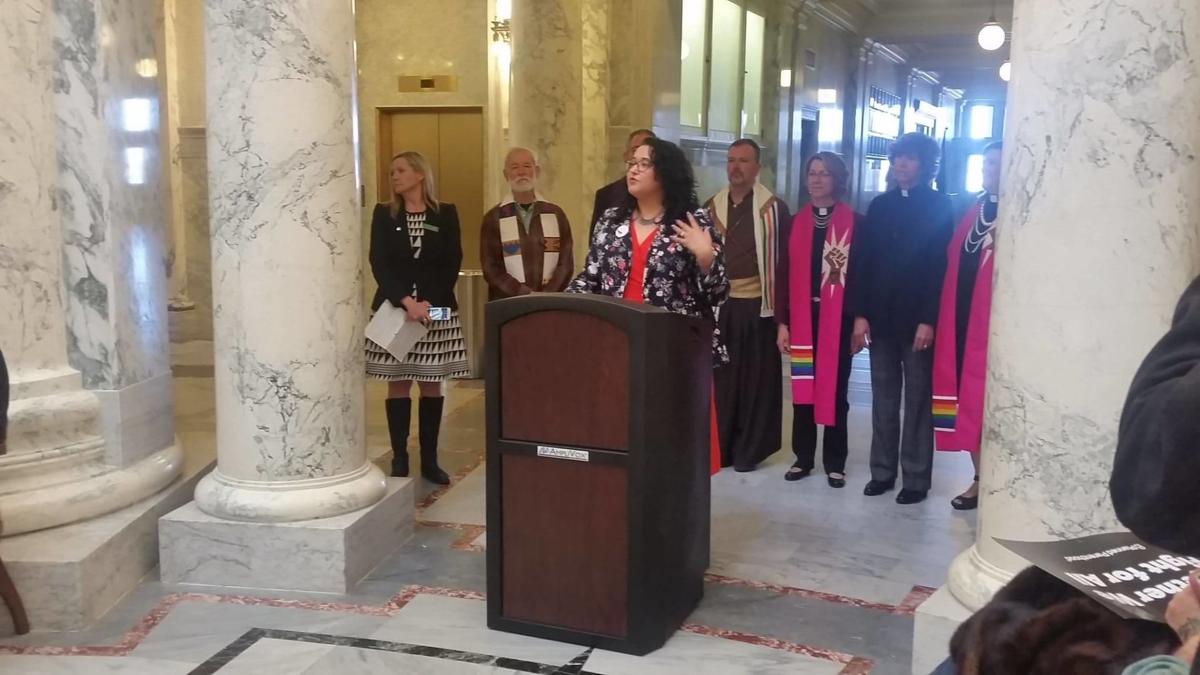 Chelsea Gaona-Lincoln, chairwoman of Add the Words Idaho, speaks at an Add the Words press conference at the Idaho Capitol on Wednesday. 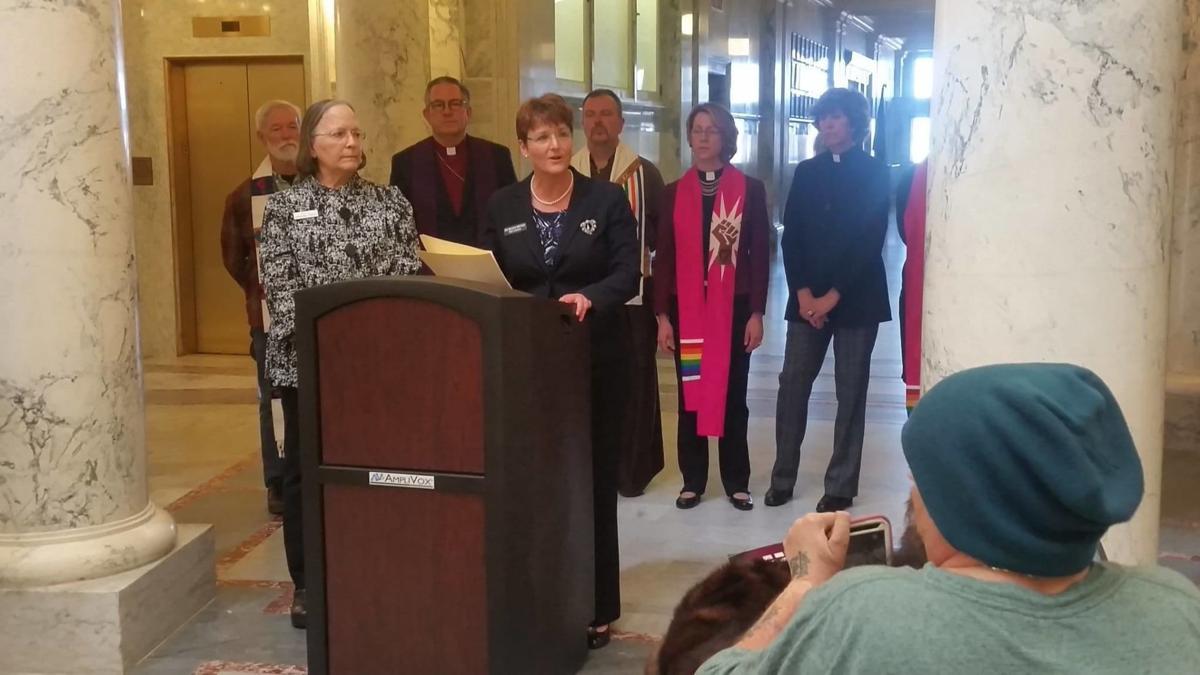 The Rev. Andrew Kukla speaks at an Add the Words press conference at the Idaho Capitol on Wednesday.

Chelsea Gaona-Lincoln, chairwoman of Add the Words Idaho, speaks at an Add the Words press conference at the Idaho Capitol on Wednesday.

Over 50 people, including LGBT advocates, religious leaders and Democratic lawmakers, gathered in the Statehouse on Wednesday to call on the Legislature to hold a hearing for SB 1015, sponsored by Sen. Maryanne Jordan, D-Boise, which would effectively “add the words” sexual orientation and gender identity to Idaho’s non-discrimination law.

Rep. Melissa Wintrow, D-Boise, who spoke for Jordan because she had laryngitis, said Jordan has been working for years to add the words, and has seen minimal progress in the Legislature. When Jordan was in her first year as a legislator, a hearing was held for an Add the Words bill, but it didn’t make it out of committee, Wintrow said.

Republican legislators had said they wanted to find a compromise regarding religious rights, but Mistie Tolman, former chairwoman of Add the Words Idaho, said Idaho already has a long list of religious protections on the books, yet there is not the same protection for the LGBT community.

“These are our compromises,” Tolman said.

Chelsea Gaona-Lincoln, current chairwoman of Add the Words Idaho, said she would have liked to celebrate this cause with Republican leadership on Tuesday, but did not see any Republican legislators there. Several Democratic legislators showed up, including Senate Minority Leader Michelle Stennett, D-Ketchum, Rep. John McCrostie, D-Garden City, and Sen. David Nelson, D-Moscow.

“I wish this didn’t seem like a partisan issue, because it’s a human rights issue,” Gaona-Lincoln said.

The Rev. Andrew Kukla with the First Presbyterian Church Boise specifically called out Hill when he spoke, and said Hill does not speak for all people of faith when he claims that Add the Words and faith have two different agendas.

“I would remind Sen. Hill that churches have not been good at equality,” Kukla said.

Kukla said broadly, religion asks people to love their neighbors, with no conditions on the word “neighbor.” He said when Hill asks for a compromise on Add the Words legislation, it’s not his faith he would be compromising, but “a particular representation of a hate and a fear.”

Zoe Spanbauer, 16, a student at Boise High School, said she was lucky enough to come out as bisexual in a fairly accepting environment, but many others in Idaho are not as fortunate. Though she described her school as accepting, she said none of the curriculum addressed sexuality, and whenever relationships were addressed in lessons, it was always in reference to heterosexual relationships. This contributes to prejudice, she said.

Spanbauer said faith and the LGBT community can peacefully coexist. Many LGBT people are spiritual, she said, and several Pride parades she has attended had positive religious representation. She affirmed the other speakers’ call for the Legislature to hold a hearing on Jordan’s bill.

“You have the opportunity to change how you are all remembered,” Spanbauer said. “I know I will remember when I’m 18.”