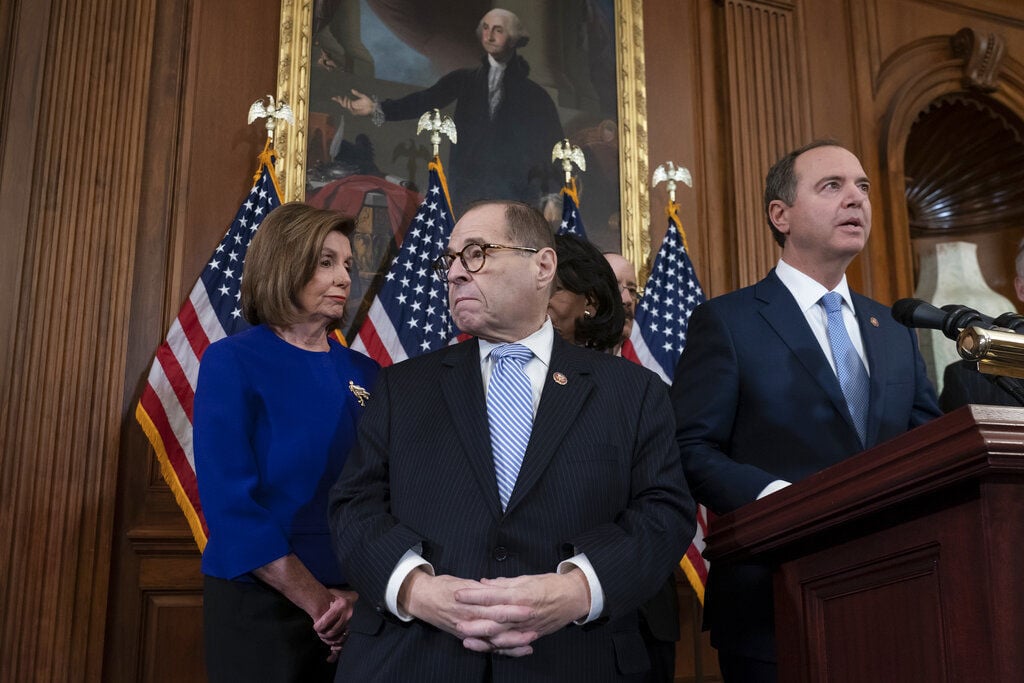 From left, Speaker of the House Nancy Pelosi, D-Calif., House Judiciary Committee Chairman Jerrold Nadler, D-N.Y., and House Intelligence Committee Chairman Adam Schiff, D-Calif., announce they are pushing ahead with two articles of impeachment against President Donald Trump — abuse of power and obstruction of Congress — charging he corrupted the U.S. election process and endangered national security in his dealings with Ukraine, at the Capitol in Washington, Tuesday, Dec. 10, 2019.

After two articles of impeachment were introduced in the House Judiciary Committee on Tuesday against President Donald Trump, charging him with abuse of power and obstruction of Congress, the Idaho Press asked Idaho’s congressional delegation for their reactions. Here are their responses:

SEN. MIKE CRAPO: “I still have yet to see anything impeachable in what has been a politicized process in the House. If an impeachment decision comes to the Senate, I expect a much more fair and complete process before there is a vote.”

SEN. JIM RISCH: “The senator is continuing to monitor developments in the House and will comment if and when impeachment proceedings move to the Senate and he has cast his official vote as a juror in the proceedings,” said Risch’s press secretary, Marty Cozza.

1st DISTRICT REP. RUSS FULCHER: Fulcher didn’t respond to a request for comment Tuesday, but in a Dec. 3 opinion piece for Fox News that he co-authored with Rep. Andy Biggs, R-Arizona, he called the impeachment inquiry a “shameful, sham of a coup” and said Democrats “continue to flail at gnats.”

2nd DISTRICT REP. MIKE SIMPSON: “I have always advocated for the institution of Congress, for our Constitution and what it stands for. When Republicans held the majority, I advocated for the rights of the minority to be heard. I’ve pushed for open rules during consideration of legislation and I’ve always demanded fairness. Today is a dark day for our country. Impeachment is to be used to remove a president for committing a crime, not for political gain, and certainly not to protest election results. My colleagues on the other side of the aisle know this full well, and yet, in an insult to the American people, they persist in their charade. Speaker Pelosi and her caucus have sought the impeachment of President Trump since before he was sworn into office; to them, impeachment is a forgone conclusion. Thankfully, President Trump’s efforts have safeguarded the economy despite Democrats’ relentless tactics, but one can’t help but imagine where we would be if Congress could work on the real issues our country faces: immigration, trade, and funding the government to name a few. We have real work to do and this madness should come to an end.”