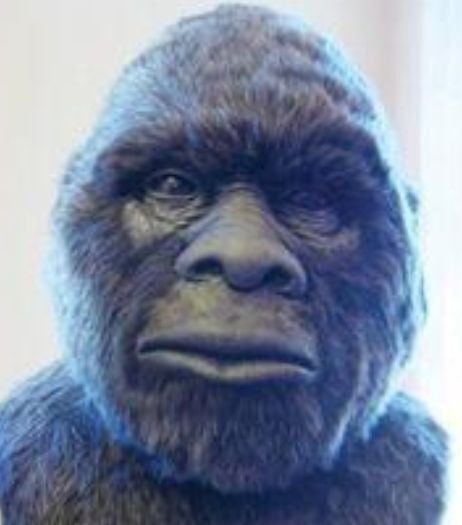 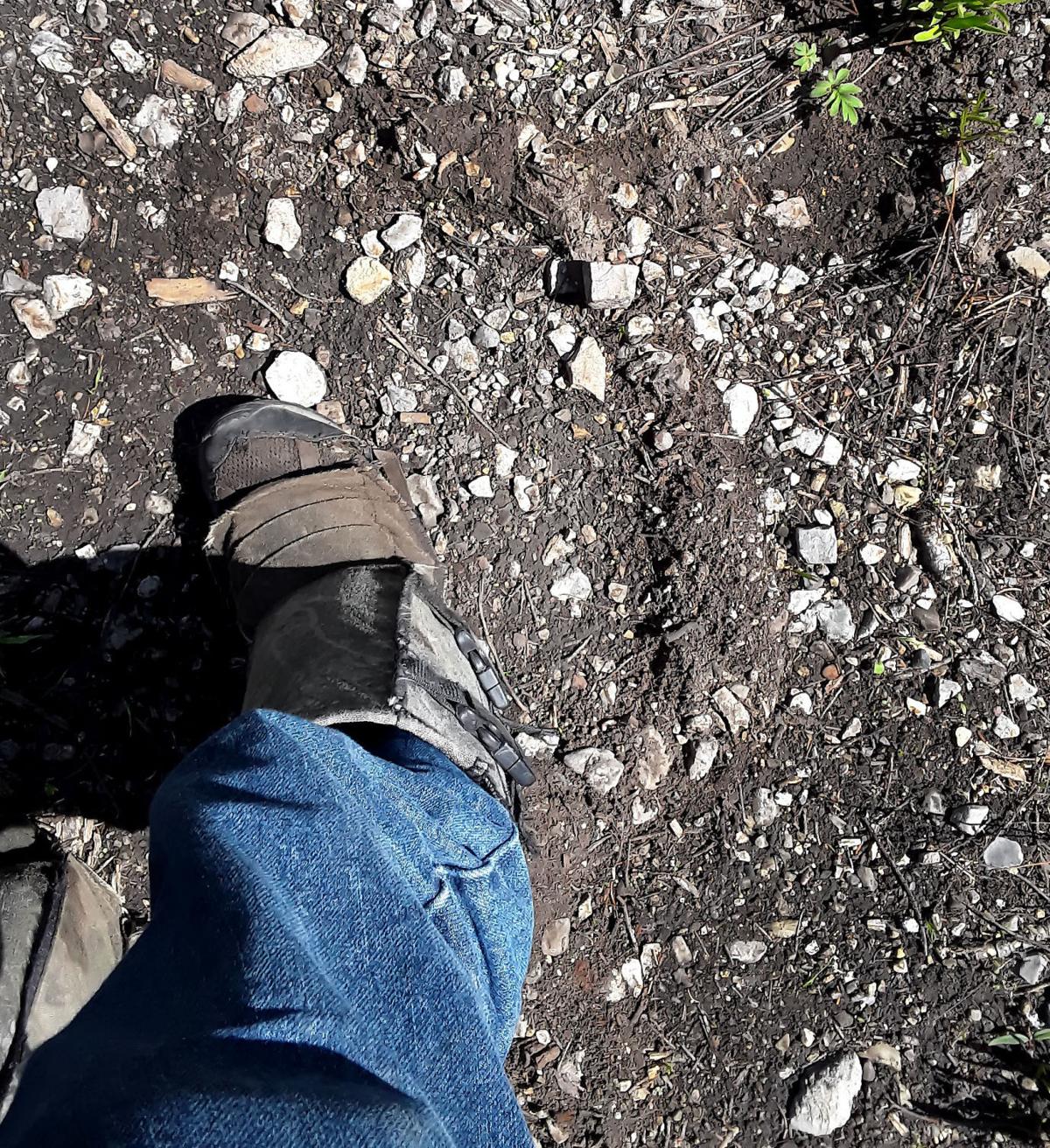 Matthew Wentz was hiking in the Mount Naomi Wilderness last month and came across this footprint that he is standing next to. The footprint is 16-17 inches long, about 7 inches wide and a half-inch deep. 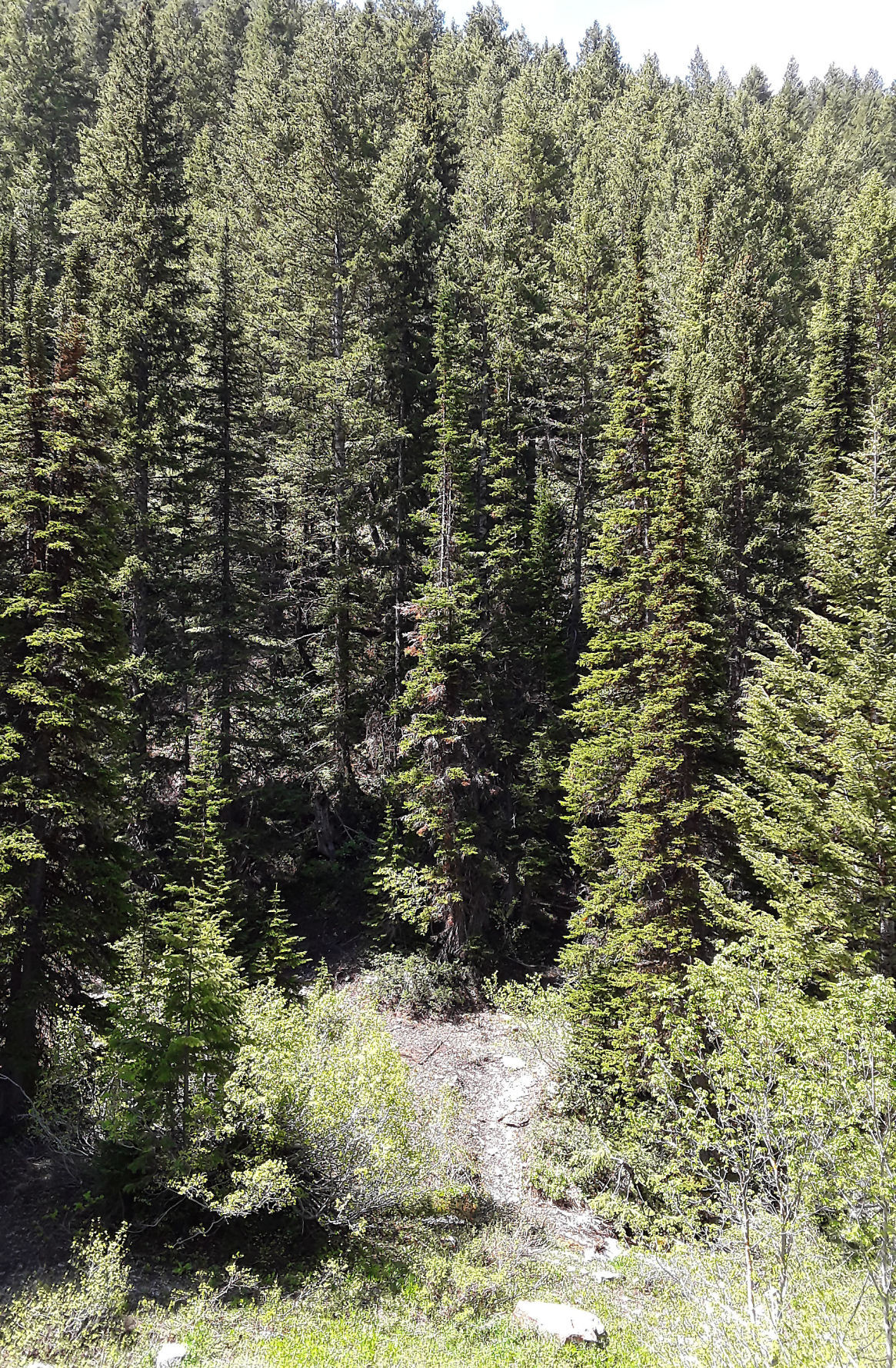 This is close to the area in the Mount Naomi Wilderness where Matthew Wentz came across a big footprint.

Matthew Wentz was hiking in the Mount Naomi Wilderness last month and came across this footprint that he is standing next to. The footprint is 16-17 inches long, about 7 inches wide and a half-inch deep.

This is close to the area in the Mount Naomi Wilderness where Matthew Wentz came across a big footprint.

LOGAN, Utah — While Matthew Wentz is a believer, he does have some skepticism about what he came across last month in the Bear River Range — a large footprint he thinks could have been made by a Sasquatch.

Wentz is an avid outdoors person. He hikes, hunts and fly fishes often. In fact, he tries to get out in the mountains around Cache Valley two to three times a week.

The 34-year-old valley native has had some interesting experiences in the wild. Another occurred on June 5 in the Mount Naomi Wilderness. He posted about it on a Facebook page called Cache Valley is Beautiful in early July and has had many responses, mostly positive.

“Most people think Sasquatch or Bigfoot is a joke,” Wentz said in a recent interview with The Herald Journal. “I have multiple friends that are older than me that have seen stuff around here. They are credible but don’t really talk about it. You know someone that has seen something and it scares them, they don’t really want to talk about it or be ridiculed. A lot of people don’t realize something like this could exist.”

Yes, Wentz does believe in Bigfoot or Sasquatch — the hairy, upright-walking, ape-like creature that dwells in the wilderness. No, he did not see one of these creatures on June 5.

However, the Logan resident did come across an impression that is hard to explain. He only found one print and took a photo of it. While he believes in Bigfoot and wants to think this is a footprint of one, Wentz admits to not being 100 percent sure about what he found.

“I’m definitely skeptical of stuff like this,” Wentz said. “I really believe there is some tall being out there but have no idea what it is. It’s hard to believe they (large Bigfoot-like creatures) would be around here because there are so many people and more going into the mountains these days compared to 30 or 40 years ago. People used to see stuff all the time.

“... A lot of people can’t comprehend it and don’t even want to acknowledge it. I’ve lived here my whole life and gotten out a lot, so I realize the possibilities of potential animals living in places you wouldn’t expect them. There is a lot of room in the mountains. When you go out during the day, you usually don’t see a lot of animals and they are usually pretty shy. A lot of them are nocturnal.”

The few times Wentz has been out after dark, it gives him a different feeling that he doesn’t like. A friend that sets up trail cams gets the most action between midnight and 5 a.m.

But this large track Wentz found was on a bright, sunny day. He does not want to be specific with the exact location but did say it was north of Green Canyon, and Mount Elmer is in the area.

He had hiked about four and a half miles and got off the trail he was on to check out a ravine he had not noticed before. Snow was melting in the rocky terrain that he called “pristine and nice.”

“It almost makes you feel like you are somewhere else,” Wentz said. “I wish more people would see these areas, would have more respect for it.”

As he was walking and avoiding the runoff, an impression on the ground caught his attention for a brief moment.

“I walked past it and thought it was kind of weird looking,” Wentz said. “I didn’t think much about it. I walked farther up and looked around the area. There was snow runoff that was causing some small waterfalls.”

After taking in the scenery, he started to go back the way he had hiked in, and this time the impression jumped out at him.

“Perceptions can be strange,” Wentz said. “When I was walking back and saw the track or impression, it looked different from that angle. I thought, wow, that is really weird. I was looking at the depth of it and how wide it was. I thought it was probably older because you could tell there were pebbles on it. I’m guessing there was snow on the ground to make the impression because the ground up there is pretty hard. You usually can’t see tracks of the bigger animals. Right now, you won’t see anything on hard ground even if it weighs 1,000 pounds.

Walking back down the trail, he stopped for a break and took a look at the photos he taken of the impression. That’s when he first noticed possible toe prints.

The 6-foot-3 Wentz explained that a mountain lion track is not much bigger than his palm. The black bear tracks he has seen are not any bigger than his hand, so that eliminates some comments on the Facebook post of it possibly being a bear.

“I wear a size 12 shoe, and in comparison to that, there is no bear that would make a print that big,” Wentz said. “I have my doubts and I’m skeptical myself, but that is no bear. ... I’ve looked up bear tracks and even the largest grizzly bear, this track is bigger. That track is in the 15 to 16 inch range, which is pretty big. If you take a shoe size, it would be bigger than a size 20. The width was six to seven inches. It’s possible the track hit and spread out, could have easily slid and exaggerated the size if there was snow, but it definitely is deep and put a pretty good dent into the ground. It’s at least a half an inch down. Now, it’s dry. I’m pretty heavy and I couldn’t make an imprint like that. With my backpack, I’m probably over 250 (pounds). I couldn’t make an impression in the same ground, so that gives you an idea if this was a true being, it was heavy. It would have to be in 700 plus pound range.

“... You would need something the size of Old Ephraim to make a track like that. It’s not impossible, but very low chances.”

Having had some scary encounters in the mountains and those sixth-sense moments, none of that happened this time for Wentz. He is licensed and carries a firearm but really didn’t have any fear.

“I’ve had the feeling of being watched and being followed a couple of times, but no idea by what,” Wentz said. “That is a horrible feeling when your sixth sense kicks in. But when I was up there, I didn’t feel any danger. When you hike a lot, you become aware that there are possible animals watching.”

Wentz’s said his father saw a Bigfoot in Arkansas 50 years ago. It scared him so much he would not go out hunting after dark ever again. He calls himself lucky to not have had such a scary experience that he doesn’t want to talk about it.

Wentz is aware of the television show “Finding Bigfoot” that paid Cache Valley a visit a few years ago. He knows of people that have reported sightings in North Ogden, Logan Canyon, Franklin Basin and the Wellsvilles. Sightings around here have “gone quiet” for almost 20 years. The Uinta Mountains have “become a hot bed” of late for reports on Bigfoot, according to Wentz.

“If such a creature is out there, it has been pushed to more remote areas,” Wentz said. “... Native Americans have been talking about Sasquatch for hundreds of years. It’s not a joke, there is something out there.”