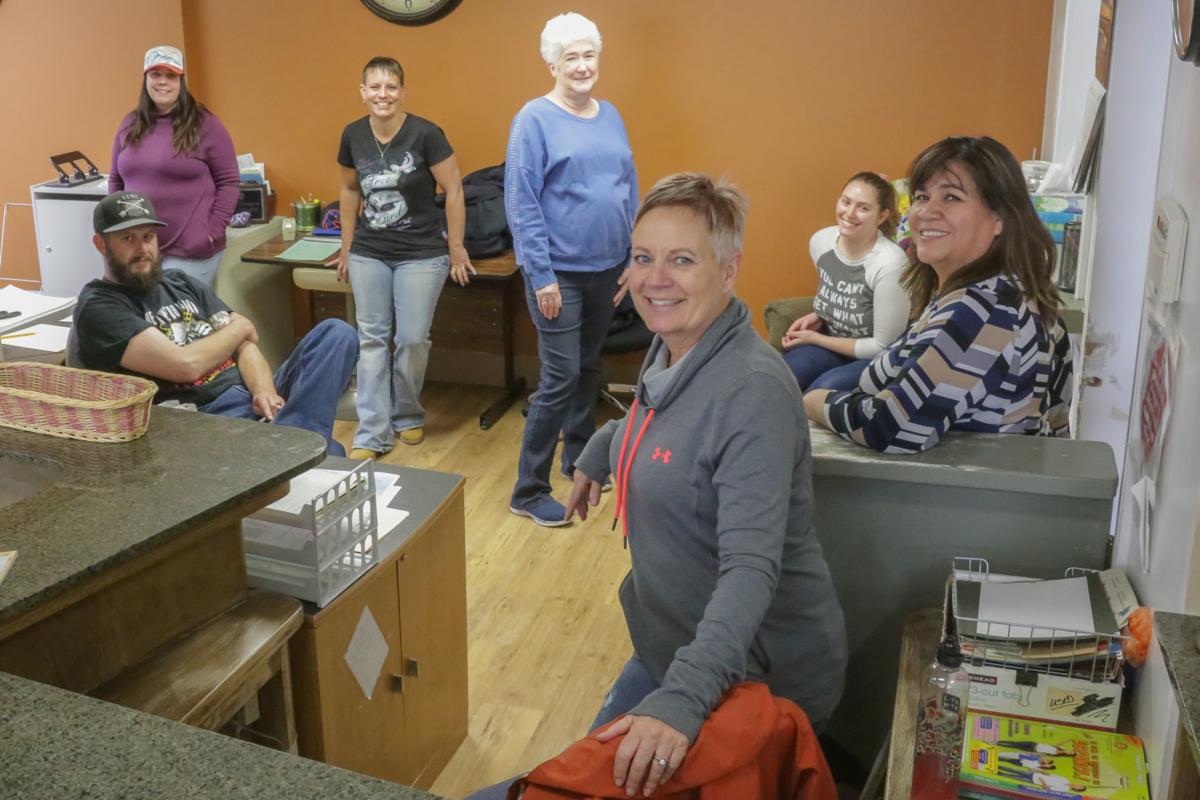 Teena McBride, executive director, and members of her team pose for a photo at the Domestic Violence and Sexual Assault Center in Idaho Falls. 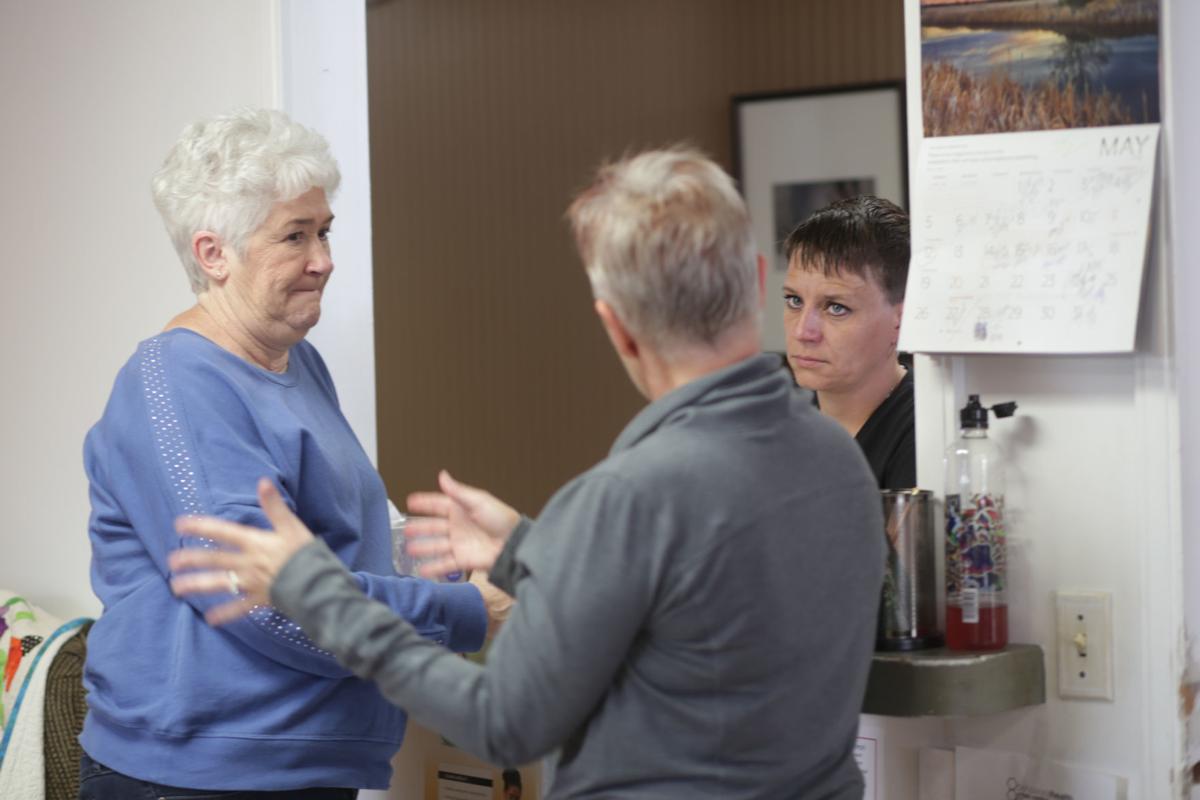 Teena McBride, right, speaks with JoAnn Hess, assistant director, and Tresstan Ker, an advocate, while at the Domestic Violence and Sexual Assault Center in Idaho Falls.

Teena McBride, executive director, and members of her team pose for a photo at the Domestic Violence and Sexual Assault Center in Idaho Falls.

Teena McBride, right, speaks with JoAnn Hess, assistant director, and Tresstan Ker, an advocate, while at the Domestic Violence and Sexual Assault Center in Idaho Falls.

On Aug. 27 Idaho Falls Police Department officers responded to a report of a battery near 14th Street.

The incident was relatively minor. A woman in her 50s had hit her roommate in the mouth, causing a cut lip. Police cited the attacker for misdemeanor battery, ordering her to appear in court.

Shortly after officers left, however, the situation escalated. Angela Marsh, the victim in the earlier incident, retaliated against her roommate by swinging a metal baseball bat at her head. Police returned and arrested Marsh. What had started as a misdemeanor offense had escalated to felony aggravated assault. Since they were roommates the initial call could have been handled as a misdemeanor domestic violence case.

If the attack had happened three months earlier, the officers would have had the option to arrest the first suspect, Susan Estenson, despite not having witnessed the fight. The separation would have allowed all parties to cool down, and allowed the court to issue a no-contact order sooner, preventing the fight.

A 1979 law had allowed law enforcement to make arrests in battery and domestic violence if they felt there was probable cause. In June, the Idaho Supreme Court ruled unanimously that the law was unconstitutional, and that abuse cases must be treated like other misdemeanors.

In the three months since the Idaho Supreme Court ruled law enforcement cannot make misdemeanor arrests in domestic abuse cases without seeing the crime, support groups for abuse victims have had to scramble to help them escape violent situations before they escalate.

Law enforcement can still make arrests if they witness the crime, if they get an arrest warrant from a judge or if they believe the crime rises to a felony level.

Victims in misdemeanor battery and abuse cases have been frustrated because law enforcement may no longer make arrests when they report abuse, often leaving them with the abuser until an arrest warrant is obtained. Law enforcement, in turn, are frustrated that they cannot act on their own judgment to separate abusers, allowing the situation to deescalate and for victims to make arrangements to leave.

“It’s frustrating to us when we can’t use that tool,” said Sgt. Bryan Lovell, public information officer for the Bonneville County Sheriff’s Office. Lovell said officers can still issue a summons for the suspect to appear in court, but often have to leave without making an arrest.

In the past an arrest would give victims the chance to find a place to stay and figure out what to do with their belongings. It also would allow the court to issue a no-contact order at the abuser’s arraignment, legally preventing them from meeting with or contacting the victim.

Instead, victims must now seek a civil protection order, a legal remedy that can only be obtained during weekday business hours at the courthouse.

“We’ve seen an increase in phone calls from law enforcement wanting to shelter victims,” said Teena McBride, director of the Domestic Violence and Sexual Assault Center. “We’ve seen more victims coming in with injuries immediately after because the incident did not happen in front of an officer and even though they have injuries the officer could not make an arrest.”

Both Lovell and McBride said officers can seek an arrest warrant for misdemeanor cases, but the process requires a prosecutor and a judge to be available. If a misdemeanor battery occurs Friday evening, that means a request for a warrant may not be considered until Monday.

Lovell said it’s possible to get a warrant on the weekends, but the process is rarely used for misdemeanors. It requires police to contact the on-call prosecutor and judge to see if a warrant can be issued.

“We’ve had situations where we’ve had to call the judge in the middle of the night and get it now,” Lovell said.

McBride says she’s been asked by the community and victims asking about the rule change and how it’s impacted the domestic violence center’s efforts to help victims. A common misconception is that the a new law was passed to change standards for arrests, when it was the result of a drug case involving a drug arrest that made it’s way before the state’s highest court.

Both the Idaho Office of the Attorney General and the Idaho Prosecuting Attorneys Association have asked the state Supreme Court to reconsider the ruling.

Twin Falls County Prosecutor Grant Loebs, speaking as a member of the Idaho Prosecuting Attorneys Association, said the brief the association submitted was rejected by the court because it wasn’t a party to the case.

“There isn’t any efficient way to deal with the problem this creates,” Loebs said.

Loebs noted that decision also effects drunken driving cases. If a caller reports that a driver appears to be intoxicated, law enforcement cannot make an arrest unless they witness the suspect driving.

Loebs also said the ruling makes it easier for suspected abusers to retaliate against victims for reporting them, dissuading victims from coming forward. He worried someone would eventually be killed because law enforcement were unable to make an arrest when called.

“It doesn’t take any imagination to see that happening,” Loebs said.

Another possibility is to introduce a constitutional amendment similar to the 1979 law that allowed misdemeanor arrests in certain cases. Such a change would not happen until the next legislative session, however, and would require a two-thirds majority from both houses. It would then appear on the November 2020 ballot for voters to approve.

McBride said one possibility is changing the law so some crimes that had been misdemeanors would be made into felonies.

In July, the Jefferson County Sheriff’s Office arrested a man for felony domestic battery. The deputies originally thought his crime amounted to a misdemeanor and called the prosecutor’s office to ask what they should do. The prosecutor said the victim’s injuries were enough to make it a felony.

In the meantime, McBride said she and her staff have been busy trying to make arrangements for victims living in an abusive household. Many are afraid to leave, worried their home will be destroyed.

“Victims don’t even have a time out to assess what they really want to do,” McBride said.