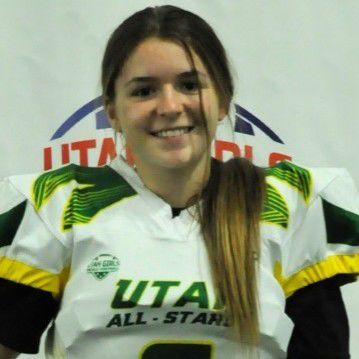 Former Blackfoot resident and girls tackle football activist Sam Gordon, 16, who now lives in Herriman, Utah, poses in her new all-star team jersey. Gordon and 21 other female football players will scrimmage against each other during the halftime show of the Pro Bowl on Sunday.

The NFL has invited 22 girls from the Utah Girls Tackle Football League in the Salt Lake Valley to scrimmage against each other during the halftime show of the Pro Bowl on Sunday. Sam Gordon is kneeling in the front row, second from the right and Lauren Dixon is standing in the back row, sixth from the left.

A week before the first female NFL coach works a Super Bowl, 22 high school girls from Utah will take center stage during the halftime show of the Pro Bowl at Camping World Stadium in Orlando, Florida, on Sunday.

Former Blackfoot resident and girls tackle football activist Sam Gordon, 16, who now lives in Herriman, Utah, and plays running back and linebacker in the Salt Lake Valley’s Utah Girls Tackle Football League, is one of the 22 girls selected from 11 teams in the league to compete in a scrimmage during the Pro Bowl halftime show.

“Basically, we get seven minutes during halftime of the Pro Bowl to do an 11 versus 11 scrimmage,” Gordon said. “Each team will get six plays each from the 25-yard-line to try and score a touchdown, make some big plays and prove that girls can play football.”

While Gordon has been a part of the Utah Girls Tackle Football League (UGTFL) since her father, Brent Gordon, helped co-found in the league in March 2015, she’s actually been on NFL’s radar since 2012, when a YouTube highlight video of her tearing through opposing defenses, ponytail bobbing, took the internet by storm.

“The NFL has been extremely supportive of Sam’s efforts to participate in football and grow opportunities for girls to play football, too,” Brent Gordon said. “The second day after Sam’s video went viral in 2012, I got a call from NFL Commissioner Roger Goodell and it was clear that he was very supportive of Sam and other girls becoming involved with the sport.”

In total, the 22 girls selected to join two UGTFL All-star teams and compete in the Pro Bowl scrimmage represent 17 different Utah high schools, with two girls being selected from each of the 11 high school-aged teams.

Sam, who is a junior at Mountain Ridge High School in Herriman, will play running back and safety during the scrimmage. Though Brent says the networks airing the Pro Bowl likely won’t broadcast the entire scrimmage, he’s hopeful the girls will make big enough plays that highlights will be shown during the Pro Bowl’s second half and potentially later in the evening on a special segment of ESPN.

“I was told that if we can make some good plays, then those highlights could be broadcast later on during the Pro Bowl,” Brent said. “But really, our goal is to make the ESPN Top 10 countdown on Sportscenter.”

Sam and the other UGTFL players are no strangers to playing for large crowds, as the league has amassed somewhat of a cult-following among football fanatics, but Sunday will mark the first time the girls get a chance to compete and share their passion for the game with a nationally televised audience. The upcoming experience has Sam brimming with excitement.

“Honestly this is a super exciting opportunity to play in front of that many people,” Sam said. “It’s also awesome that the entire league will get representation at the national level. The potential to continue growing our league that could come from this opportunity is probably the most exciting part.”

Lauren Dixon, 17, a junior at Summit Academy in Bluffdale, Utah, who has played middle linebacker in the league for the last five years added, “I am so stoked, like literally I am over the moon about it. Girls love this sport and deserve the chance to keep playing it. To have the NFL continuing to support us is so awesome.”

The UGTFL Pro Bowl halftime scrimmage isn’t the only NFL storyline involving women. According to NBCSports, Katie Sowers, an offensive assistant coach with the San Francisco 49ers, will make history on Feb. 2, becoming the first woman to coach in a Super Bowl, when the Niners take on the Kansas City Chiefs in Miami for Super Bowl LIV.

In addition to taking care of flights, hotels and some of the meals for the 22 girls competing in the Pro Bowl halftime scrimmage, the NFL invited all the girls to watch some of the Pro Bowl practices in person, giving them a chance to interact directly with the standout stars of the 2019-20 season.

Though Dixon’s favorite players, Bo Jackson and Troy Polamalu, have long since retired, she said she’s still looking forward to interacting directly with players at the Pro Bowl; however, not as much as buckling up her chinstrap and playing on the Camping World Stadium field herself.

“Watching the Pro Bowl in person is going to be exciting, but getting a chance to play at halftime is a once-in-a-lifetime experience.”