Lindsay Christensen poses with an Eastern Cape Kudu that she harvested with a bow during a trip to South Africa earlier this year. Christensen is one of four contestants on the 11th season of “Ultimate Extreme Huntress.” 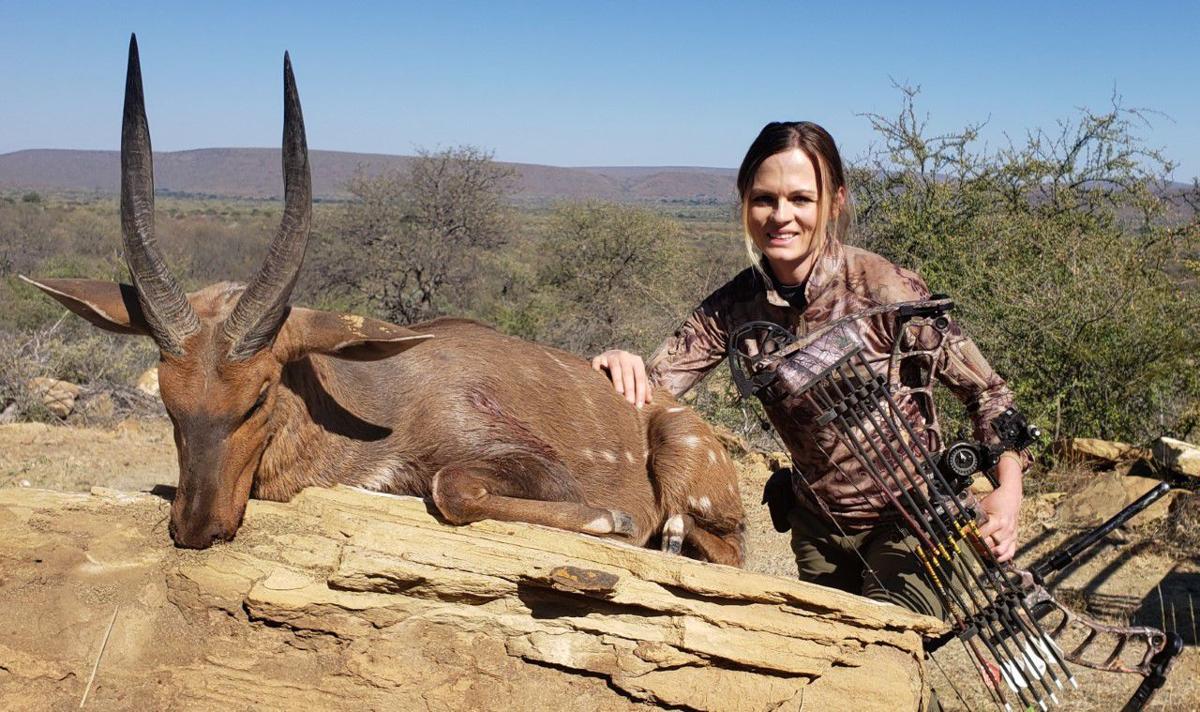 Lindsay Christensen poses with a Cape Bushbuck that she harvested with a bow during a trip to South Africa earlier this year. Christensen is one of four contestants on the 11th season of "Ultimate Extreme Huntress." 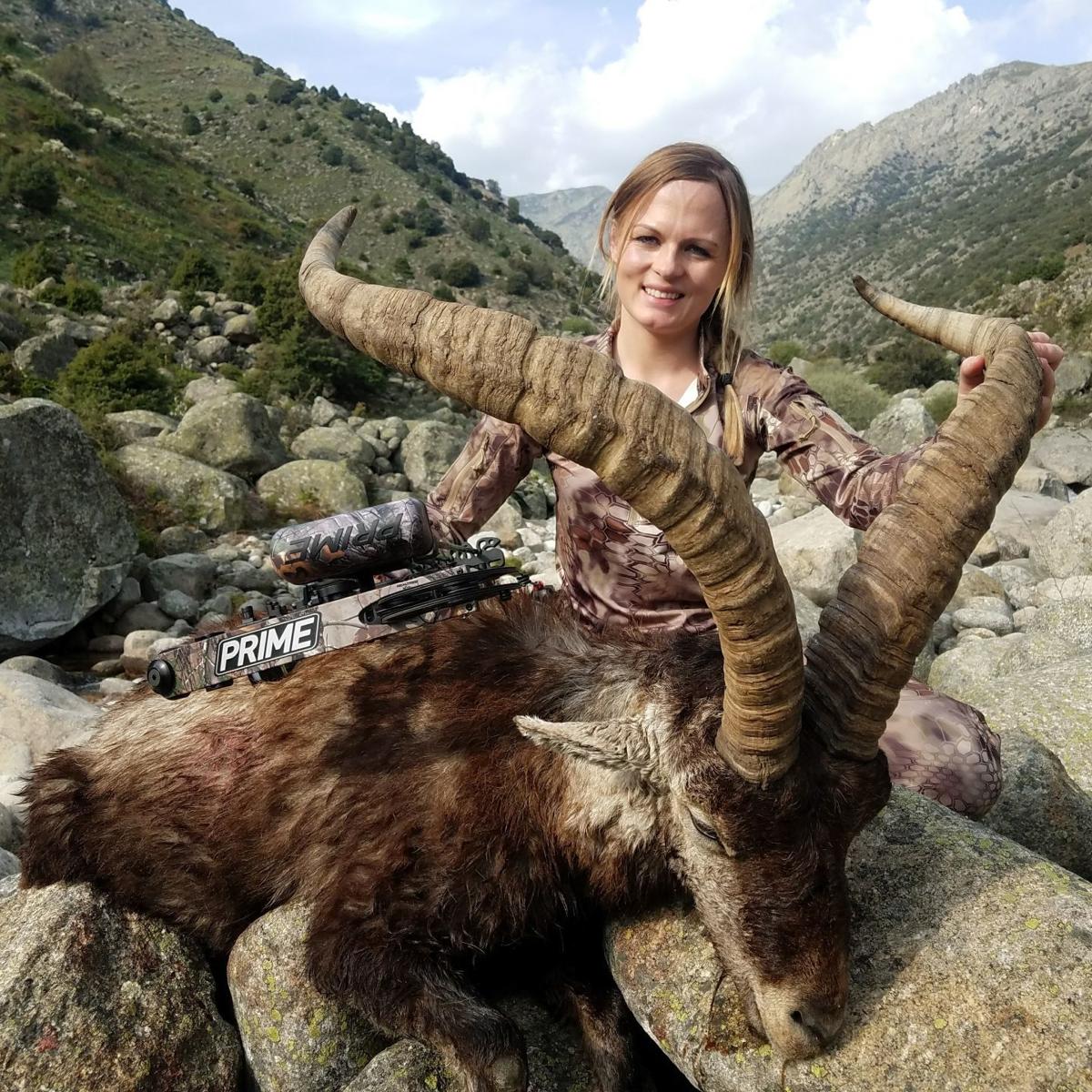 Lindsay Christensen poses with an Eastern Cape Kudu that she harvested with a bow during a trip to South Africa earlier this year. Christensen is one of four contestants on the 11th season of “Ultimate Extreme Huntress.”

Lindsay Christensen poses with a Cape Bushbuck that she harvested with a bow during a trip to South Africa earlier this year. Christensen is one of four contestants on the 11th season of "Ultimate Extreme Huntress."

Becoming the 2017 “Extreme Huntress” wasn’t enough for one Weston woman, who is back on the reality television show again, this time competing to become the “Ultimate Extreme Huntress.”

Lindsay Christensen, 31, who lives in Weston but grew up in nearby Preston, is one of four previous “Extreme Huntress” winners vying to receive the title of all-time huntress champion during the 11th season of the show, which airs every Sunday online at extremehuntress.com and on Amazon Prime Video.

According to its website, the Extreme Huntress competition aims to preserve an outdoor heritage and create positive role models for women who want to participate in hunting. For Christensen, who grew up in rural Idaho without any brothers, she hopes her participation in the show will help erase the stigma surrounding women who hunt.

“One thing that was hard for me growing up is I didn’t have any brothers,” Christensen said. “My dad taught both my sister and I how to hunt. We were with him on the mountain before I could even walk. But growing up, I was made fun of all the time at school because very few girls hunted. My peers thought I was so weird. I wish to change that stigma. Getting more women into the sport is important, and I don’t want girls to feel intimidated about hunting like I was made to feel.”

For its 11th season, the international “Ultimate Extreme Huntress” contest, produced by Firesteel Films Inc., drew from a decade of previous winners and narrowed the list down to a slate of four women.

The contest involves two primary events on two continents — an outdoor skills challenge filmed on location at the FTW Ranch in Barksdale, Texas, and an African safari hunt for Cape buffalo and plains-game with one of Africa’s best safari operators, Dale “Donza” DesFountain, which is filmed in Zimbabwe throughout the Save Valley Conservancy.

In addition to Christensen, the other finalists hail from Colorado, Montana and Sweden. Judges will pick the competition winner through a combination of her score in the outdoors skill challenge, a separate score from the judges in the hunting competition and their total online votes received after the episodes air online. More details about the challenges and voting is available on the Extreme Huntress website.

Whoever claims the Ultimate Extreme Huntress title will travel to the Kay Bailey Hutchison Convention Center in Dallas, Texas, in January where she will be recognized during the Dallas Safari Club’s annual awards dinner. Additionally, the winner will also receive the prestigious Extreme Huntress Award, a bronze statue designed by famed artist Mark James, according to Ammoland.com.

Christensen’s forte is archery, as she grew up hunting exclusively with a bow. In fact, she never even owned a hunting rifle before winning in the Extreme Huntress competition in 2017. Knowing that the 2020 competition would involve rifle hunting, Christensen spent several months practicing before the competition started.

While her personal preparation helped prepare her for the competition, Christensen said the Sportsman’s All-Weather All-Terrain Marksmanship, or SAAM training, she received at the FTW Ranch in Texas as part of the show provided her with invaluable shooting techniques.

“The SAAM training was taught by ex-military snipers,” Christensen said. “Normally, the training is four days, but because we were constricted on time we had to do it all in two days. We learned to calculate our bullet speed and call our own wind up to about 500 yards. It was literally a whirlwind. We did 14 head-to-head challenges in two days, one right after the other. We barely had time to think.”

Five episodes of the “Ultimate Extreme Huntress” have aired as of this week, and so far, Christensen has a commanding lead in the skills challenge, winning almost every single head-to-head event. To date, Christensen leads with 430 points, Ulrika Karlsson-Arne of Sweden is in second with 329 points, Angie Tennison of Montana is in third with 303 points and Jackie Guccini rounds out the list with 201 points.

In terms of online voting, Christensen could use some help, she said. As of Thursday evening, Guccini leads online voting with 34.39 percent, Karlsson-Arne is in second with 29.55 percent, Christensen is in third with 28.06 percent and Tennison, with 8 percent, is in last place.

Those interested in voting for Christensen can do so by visiting extremehuntress.com/voting, selecting her name, entering a valid email and then confirming their vote by following the link sent to the corresponding email.

Christensen is no joke with a bow in her hands. In 2017, she became the first woman to ever harvest a Gredos ibex with a bow.

Considering she’s more comfortable with a bow in her hands than a rifle, Christensen said she is quite proud of how well she has fared in the competition so far.

“I surprised myself, to be honest, with how well I’ve competed,” Christensen said. “I was third overall in the challenges the last time I participated. I came home and was pretty excited and proud of myself that I was able to convert some of my archery techniques and knowledge and transition it into the rifle shooting. The judges were surprised as well that I was doing the best with the rifles.”

You’d think the opportunity to hunt plains-game in Africa would be a once-in-a-lifetime experience, but for Christensen, she actually traveled to the continent twice this summer.

Christensen said her first trip to Africa definitely helped her during the Ultimate Extreme Huntress competition.

“I had only seen African animals in pictures so my first trip to South Africa really helped me with my animal identification skills,” Christensen said. “I also learned that the best time to hunt in Africa was right at last light, which is when they are moving around the most.”

The next episode of the Ultimate Extreme Huntress competition is set to air Sunday. Though she hopes to win, Christensen would be satisfied with the opportunity to become a role model for other women who want to become hunters themselves.

“There are tons of people out there who want to introduce women to the sport of hunting and also want to see them succeed,” she said. “Though I really want to become the Ultimate Extreme Huntress, I’m more hopeful that I can be one of those mentors for new huntresses.”