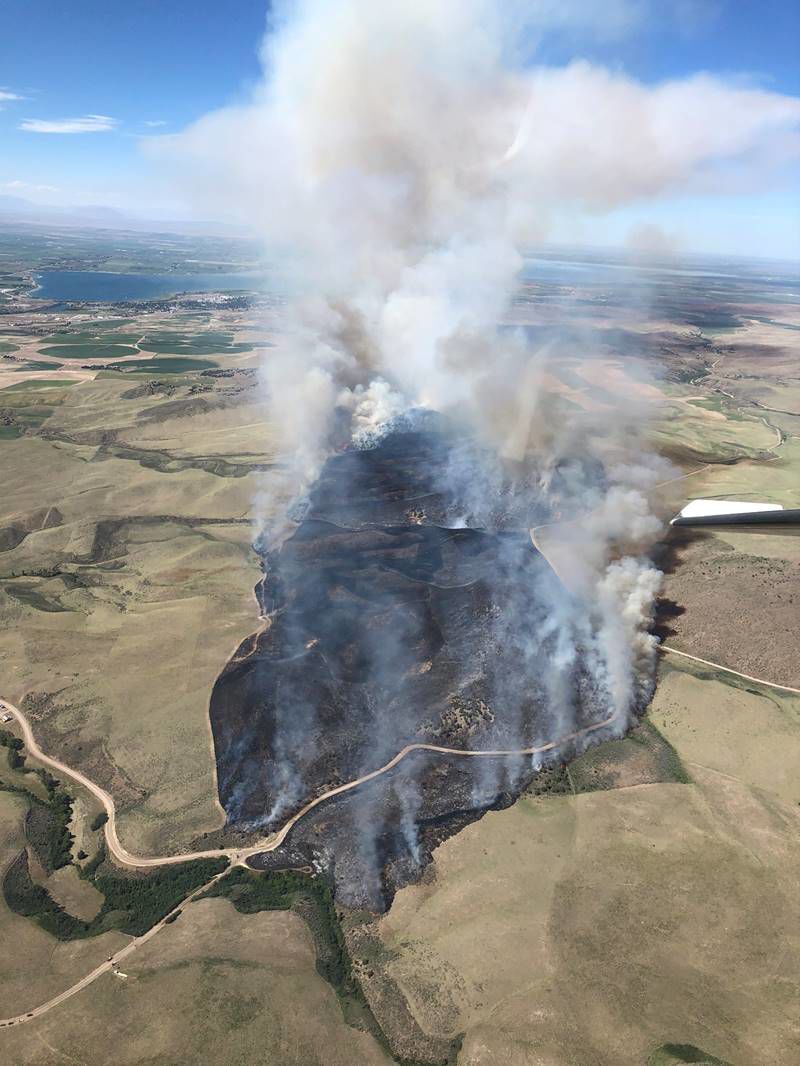 The Cold Creek Fire has forced the evacuations of homes near American Falls. 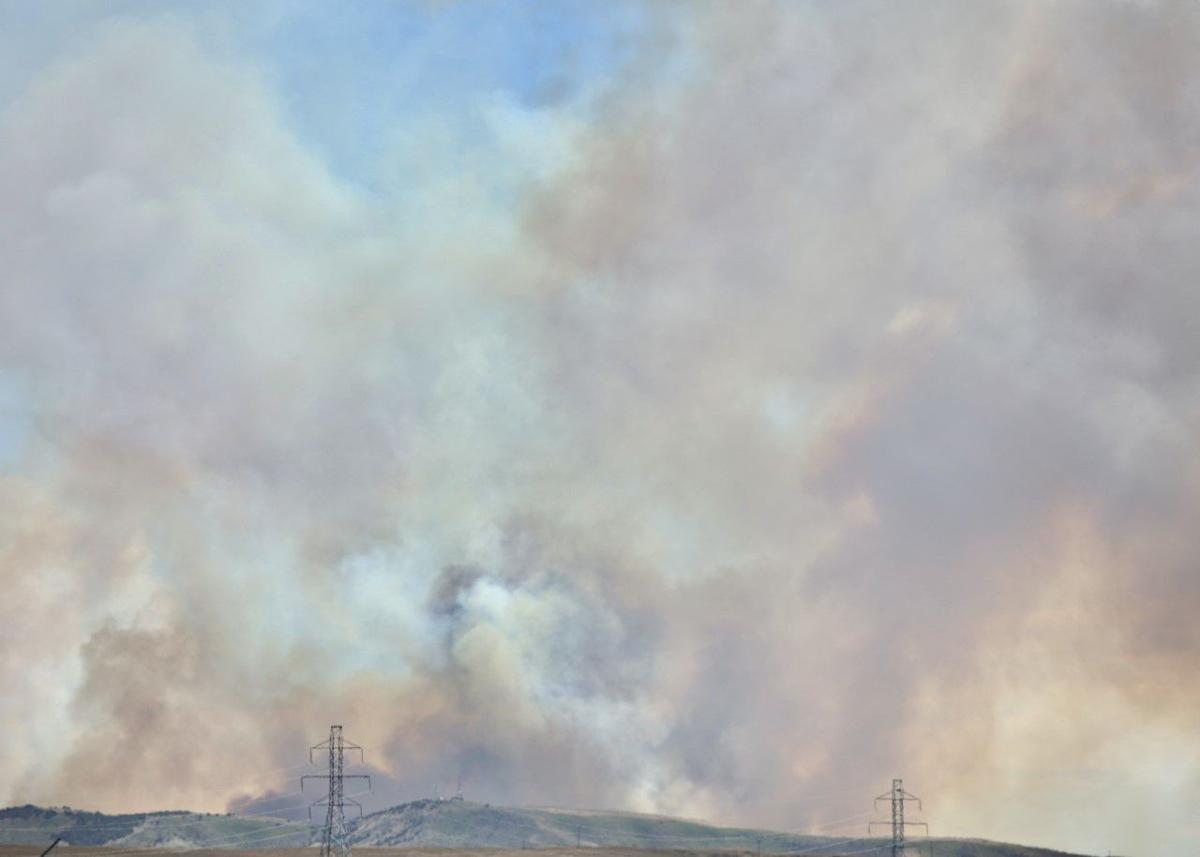 The Cold Creek Fire has forced the evacuations of homes near American Falls.

The hot start of East Idaho’s wildfire season continued with numerous weekend blazes and two fires that broke out Monday, one of which has resulted in numerous evacuations.

Authorities have begun evacuating residents in the American Falls area northwest of the Indian Springs Resort and RV Park as the Cold Creek Fire continues to move toward inhabited areas.

The Cold Creek Fire, a blaze that ignited about 5 miles south of American Falls in the area surrounding Indian Springs Resort and RV around 3:30 p.m. Monday, has quickly engulfed over 1,200 acres, according to an Eastern Idaho Interagency Fire Center press release.

According to the press release, the fire was running through grass, brush and juniper, fueled by 20 mph winds.

Several power lines were down and the fire was threatening communication towers on Paps Mountain.

The fire remains under investigation but is believed to be human caused. Firefighters are operating under a unified command, meaning the Bureau of Land Management and local departments are all working together with equal say in the fire.

Nobody has been injured during the blaze and no structures have caught fire, but the blaze began threatening structures around 6 p.m. Monday.

Separately, a human-caused brush fire that was sparked Sunday night near Goodenough Road about 2.5 miles west of McCammon reignited Monday afternoon and reached about 25 acres around 7:30 p.m., according to Eastern Idaho Interagency Fire Center officials.

Officials said the fire was first reported at 8:15 p.m. Sunday and fire crews believed it was extinguished at about 1:30 a.m. Monday. Officials said strong winds rekindled the fire, and smoke could be seen as far away as Interstate 15.

As of Monday night, crews were mopping up hot spots within the fire's interior and two engines were released to the Cold Creek Fire, according to the press release. The fire did not threaten any homes or structures.

The cause of the fire is still under investigation but is known to be human caused.

Nobody has been injured and no structures have been damaged in either of the blazes Monday.

McCammon firefighters battled a separate fire in a shed Sunday evening on Jensen Road near Highway 91 that was first reported around 5:15 p.m., according to Dean Hazen with the Inkom Fire Department.

The property owner was able to extinguish the blaze before McCammon and Inkom firefighters arrived on scene. The fire caused minor damage to the 120-square-foot shed and did not result in any injuries. Firefighters suspect the blaze was caused by faulty electrical wiring but it’s exact cause remains under investigation.

Firefighters on Friday responded to a burning camper trailer and several brush fires.

The first incident, a brush fire, occurred around 11 a.m. Friday when a car traveling on Interstate 15 southbound between the Portneuf Gap and Inkom sustained a broken axle, causing one of its wheels to pop off.

Miraculously, the car didn’t overturn but the wheel caused sparks as it bounced off the freeway and those sparks ignited a brush fire along the side of the road, authorities said.

Pocatello Valley firefighters responded and spent about 90 minutes extinguishing the fire. The blaze scorched about a half-acre and was blocked from growing further by a frontage road along the interstate.

Around 6:20 p.m. Friday Fort Hall, Blackfoot and North Bannock firefighters responded to several brush fires caused by a passing freight train along Highway 91 in the area of the Sage Hill Casino south of Blackfoot, the Shoshone-Bannock Tribes reported.

The largest of these brush fires grew to 15 acres in the area of the Interstate 15 overpass bridge at the Highway 91 exit.

There were homes near the brush fires but the flames did not damage any of them, the tribes said.

Fort Hall firefighters no sooner had extinguished the brush fires along Highway 91 around 10:20 p.m. Friday when they were called to extinguish a large bonfire outside a home on Truckerville Road in Power County. The fire had been started without a burn permit and firefighters worked with the homeowner to extinguish the flames.

Around the same time the bonfire was reported the Pocatello Fire Department responded to a burning camper trailer on the Interstate 15 South Fifth Avenue on-ramp.

Firefighters extinguished the fire but not before the flames destroyed the camper trailer.

The pickup towing the trailer did not appear to be damaged.

Firefighters said the fire was likely caused by an electrical issue.

The fire temporarily shut down the Interstate 15 South Fifth Avenue on-ramp in Pocatello.

None of Friday’s fires resulted in any injuries.