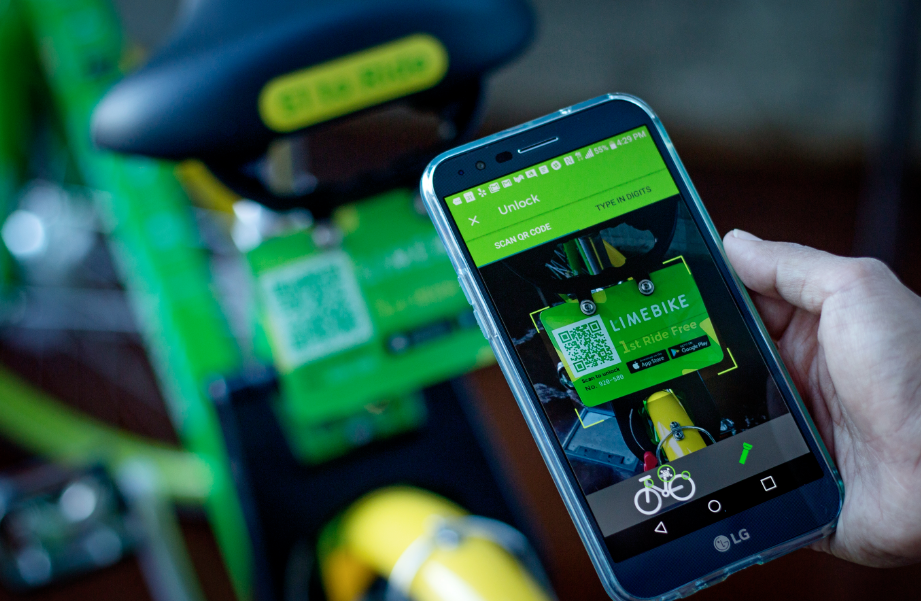 Lime is a Silicon Valley-based company that offers dock-free bike sharing that uses GPS technology and a phone app. The company made its Idaho debut last year with electric scooters in Meridian but soon shut down operations. The company is successfully operating in Boise. 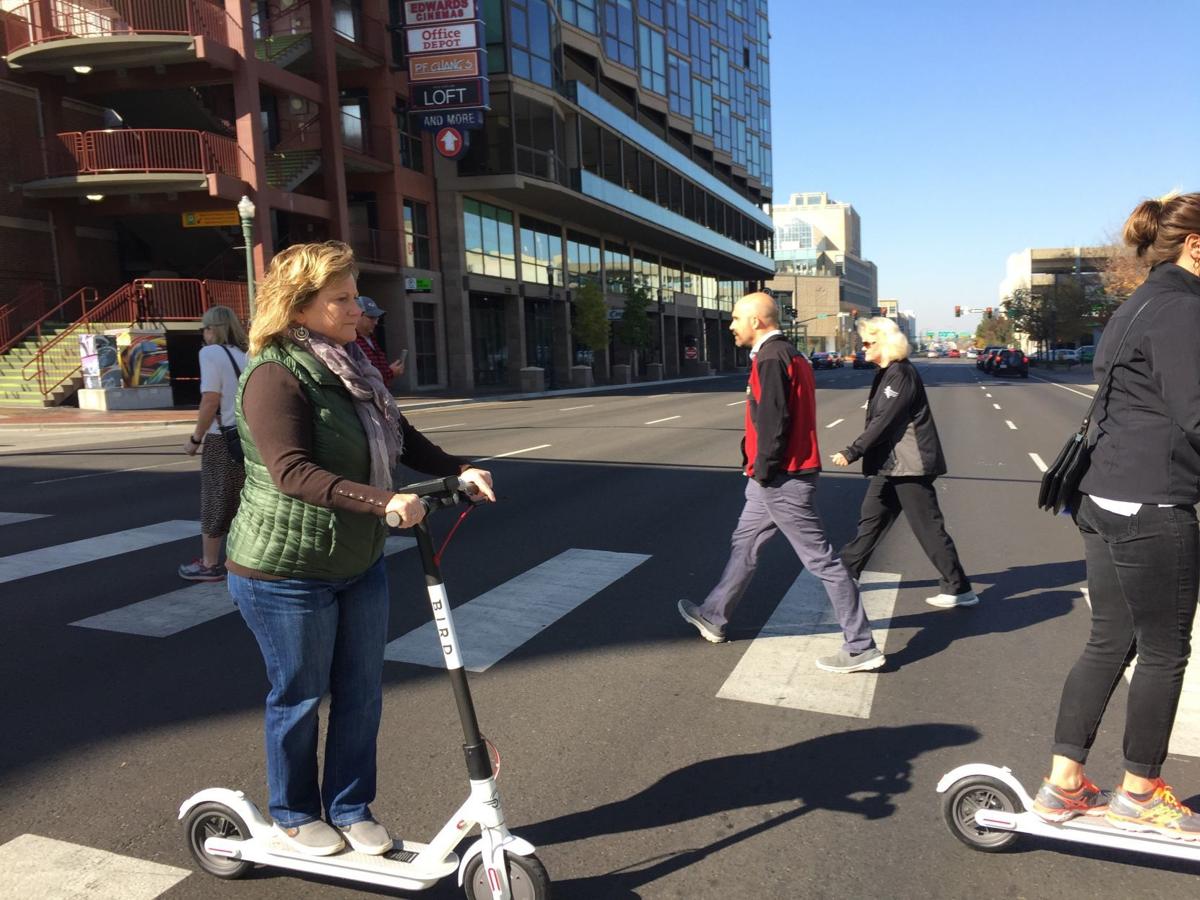 People ride e-scooters in downtown Boise. Lime and Bird deployed the scooters in Boise on Oct. 18, 2018. 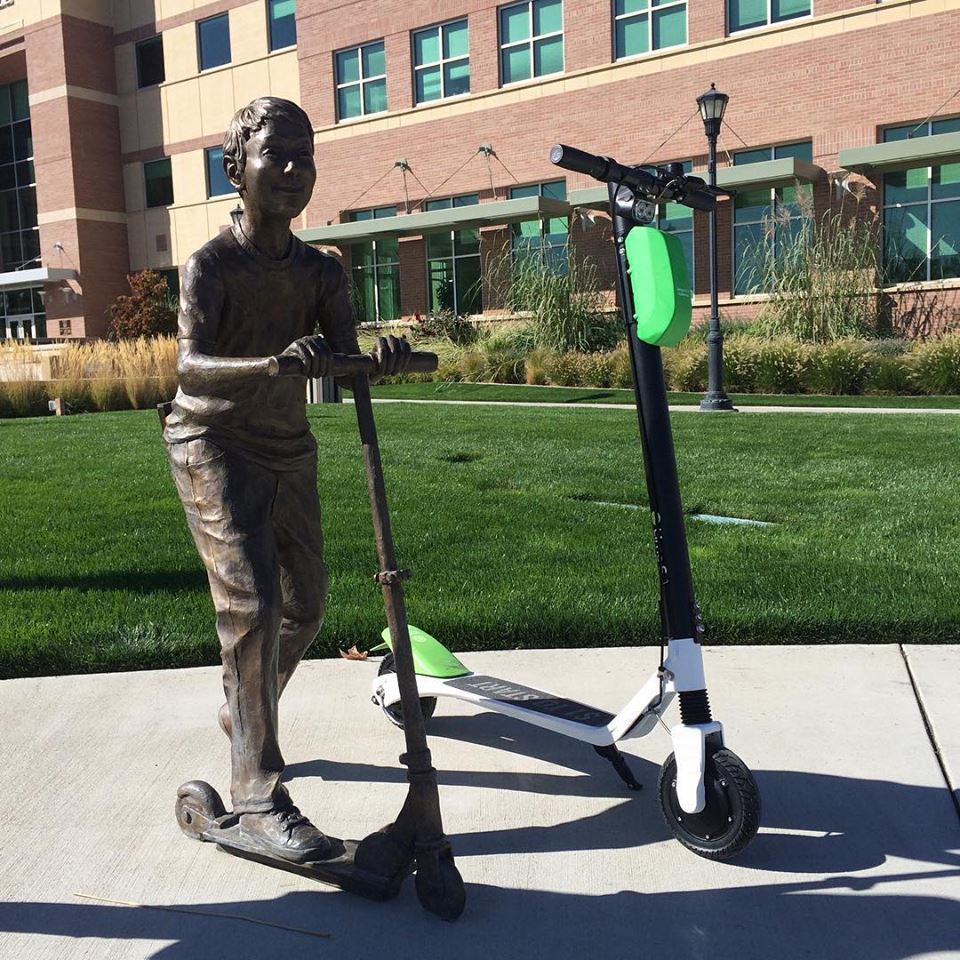 A Lime electric scooter is lined up next to a sculpture by Meridian City Hall on this past fall.

Lime is a Silicon Valley-based company that offers dock-free bike sharing that uses GPS technology and a phone app. The company made its Idaho debut last year with electric scooters in Meridian but soon shut down operations. The company is successfully operating in Boise.

People ride e-scooters in downtown Boise. Lime and Bird deployed the scooters in Boise on Oct. 18, 2018.

A Lime electric scooter is lined up next to a sculpture by Meridian City Hall on this past fall.

When members of the Idaho Falls Parks and Recreation staff attended the National Recreation and Park Association convention in Indianapolis last fall they were drawn to a new way of getting around downtown: E-scooters.

“It was so crazy, these electric scooters were everywhere,” assistant parks and rec director PJ Holm said. “You’d just scan with your phone and it charged 10 cents a minute. You can ride them around town.”

In many cases, stationless e-scooters are faster than taking a bus (no waiting), easy and fun to use, reduce vehicle traffic in town, a cinch to park and there when you need one.

But Indianapolis introduced the e-scooters last summer and officials there have regretted the decision.

“I talked with one of the directors in Indianapolis about these scooters ... he said he wished that he could give them back,” Holm said. “He said all of the scooters showed up overnight and have cluttered up the sidewalks and streets and people don’t know how to ride them. … They are in that reactive phase right now. ... And two cities I’ve talked to so far have said the exact same thing.”

Holm said his staff has been studying bringing e-scooters to Idaho Falls. Two e-scooter companies have contacted the city about allowing them to set up shop.

“We wanted to make sure we identified what the best practices are so that we wouldn’t end up with sidewalk litter or clutter but instead a program that allows people to be mobile,” Idaho Falls Mayor Rebecca Casper said.

Not all cities have had a negative reaction to e-scooters. Boise allowed two companies, Lime and Bird, to bring 250 e-scooters each to the city in September. Within the first week, people rode them more than 13,000 miles.

“It’s gone quite well compared to what we’ve heard about in other cities,” said Boise spokesman Mike Journee. “We’ve been quite pleased with that launch. There haven’t been a lot of complaints. The vendors have been very thoughtful about how they’ve approached things — they even put on a couple of events to educate riders about the proper way to do this, so it’s been a positive experience.”

The launch went so well that the city is looking at increasing the number of e-scooters this spring and allowing a third e-scooter company to join in. The city currently has a limit of 750 commercial e-scooters and is considering increasing that number to 1,500.

In the nearby city of Meridian, the September e-scooter launch was a flop. City officials there began getting complaints that abandoned scooters were blocking sidewalks and wheelchair ramps. At Meridian’s request, Lime removed all of its scooters after a few days. City officials said mostly it was an issue of training riders to use and park the machines properly.

The Meridian City Council is considering a revamped ordinance in February to allow e-scooters back on its streets. For the most part, where bikes can go, e-scooters will also be allowed.

Siddoway said city leaders hope to educate riders prior to the next rollout to fix issues that arose the first time.

“It comes down to user behavior,” Siddoway said. “I don’t think the scooter companies are trying to place them in places they shouldn’t be or do things that are nefarious, but it’s really on the user on where they leave it and how they leave it. That’s harder to control.”

“We looked at the worst-case scenarios and tried to structure our ordinances that way,” he said. “We wanted some skin in the game from companies too, so we required that they pay a $5,000 business license. We also have stipulations for penalties if the devices were left in places where they shouldn’t be. Ultimately we’re very pleased that it’s provided another mode of transportation for people around town that we wouldn’t have otherwise.”

Dockless e-scooters are activated using a customer downloaded smartphone app. The app allows a user to scan a QR code on the bike to unlock it and wake the machine up. The app also allows the company to access credit card information. E-scooters cost about $1 per ride plus 15 to 20 cents per minute.

An e-scooter app shows where the scooters can be located and also warns users where not to leave scooters.

The scooters are equipped with GPS locators to allow company representatives to pick them up each night, recharge them and redistribute them.

The scooters are operated with a bike-like brake handle on the left handlebar and a throttle on the right handlebar. A quiet electric motor pushes the scooter at a maximum speed of 15 mph. Riders are advised to wear helmets, but they not required.

The machines can be set up with “geofencing,” causing the scooter to slow down to 5 mph or not operate in areas they’re not supposed to be in such as schools or skateboard parks. Messages also can be sent to users that scooters are not allowed to be left in certain areas.