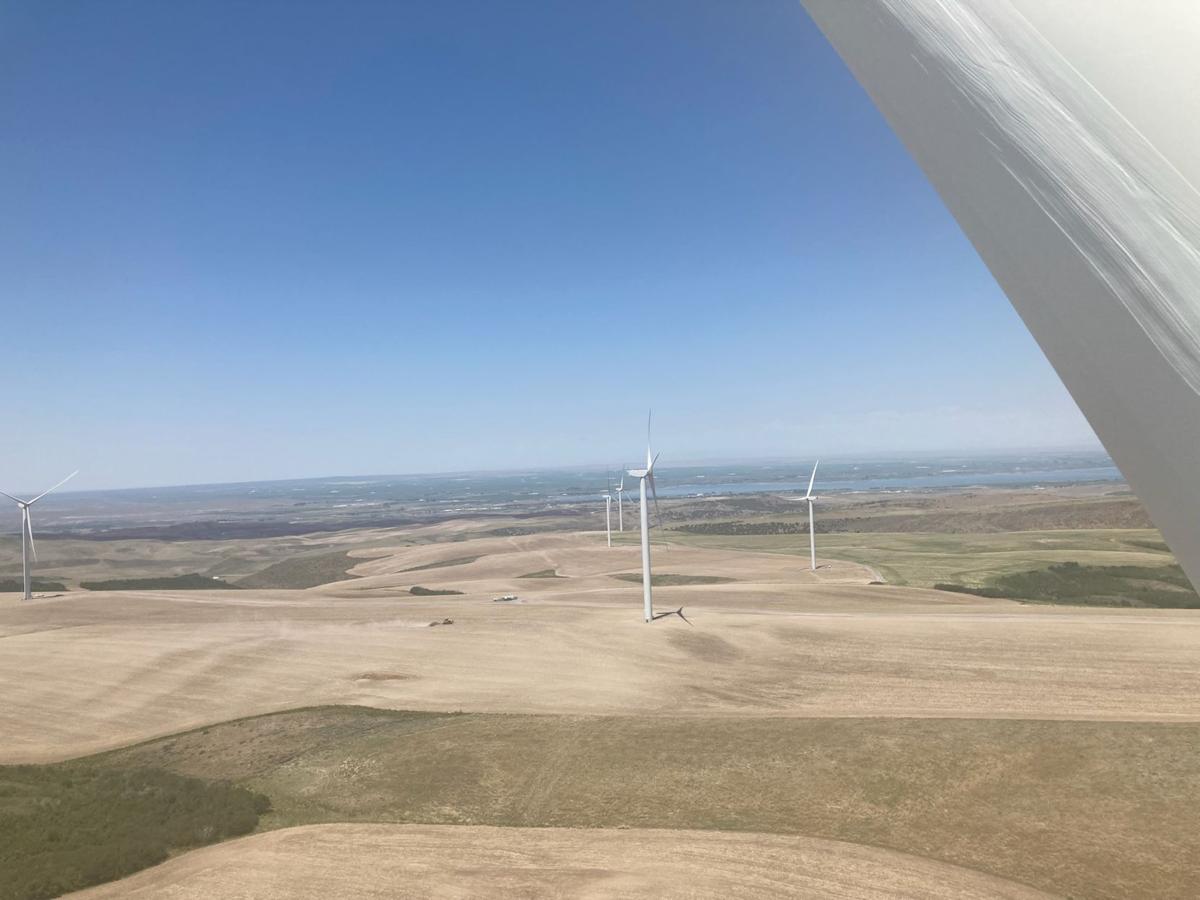 Dry-land grain can be seen growing from the top of a wind turbine tower in American Falls. 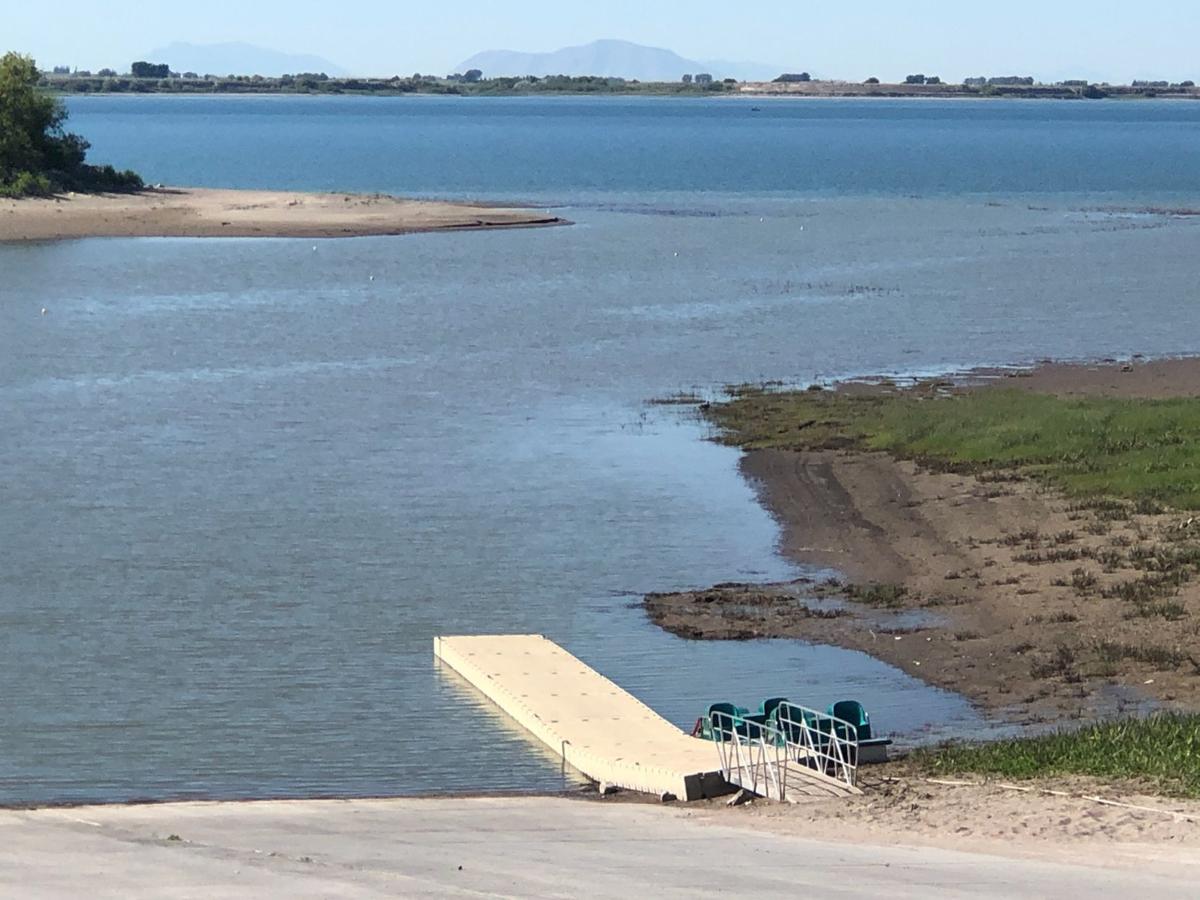 Water levels are low at the Willow Bay Marina on American Falls Reservoir due to hot and dry conditions. The reservoir is now at about 44% of capacity. 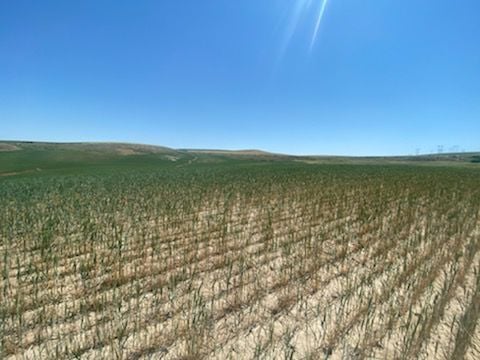 Wheat grows thin on dry land near American Falls. Hot and dry weather has hurt yields for dry-land farmers throughout the region. 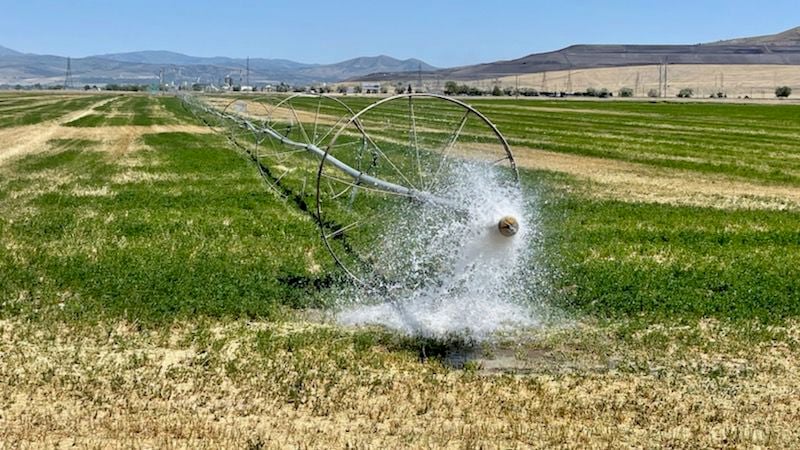 Water pours from the end of a wheel line recently moved on an alfalfa field near Pocatello Regional Airport. Hot and dry weather has set back crops throughout the state. 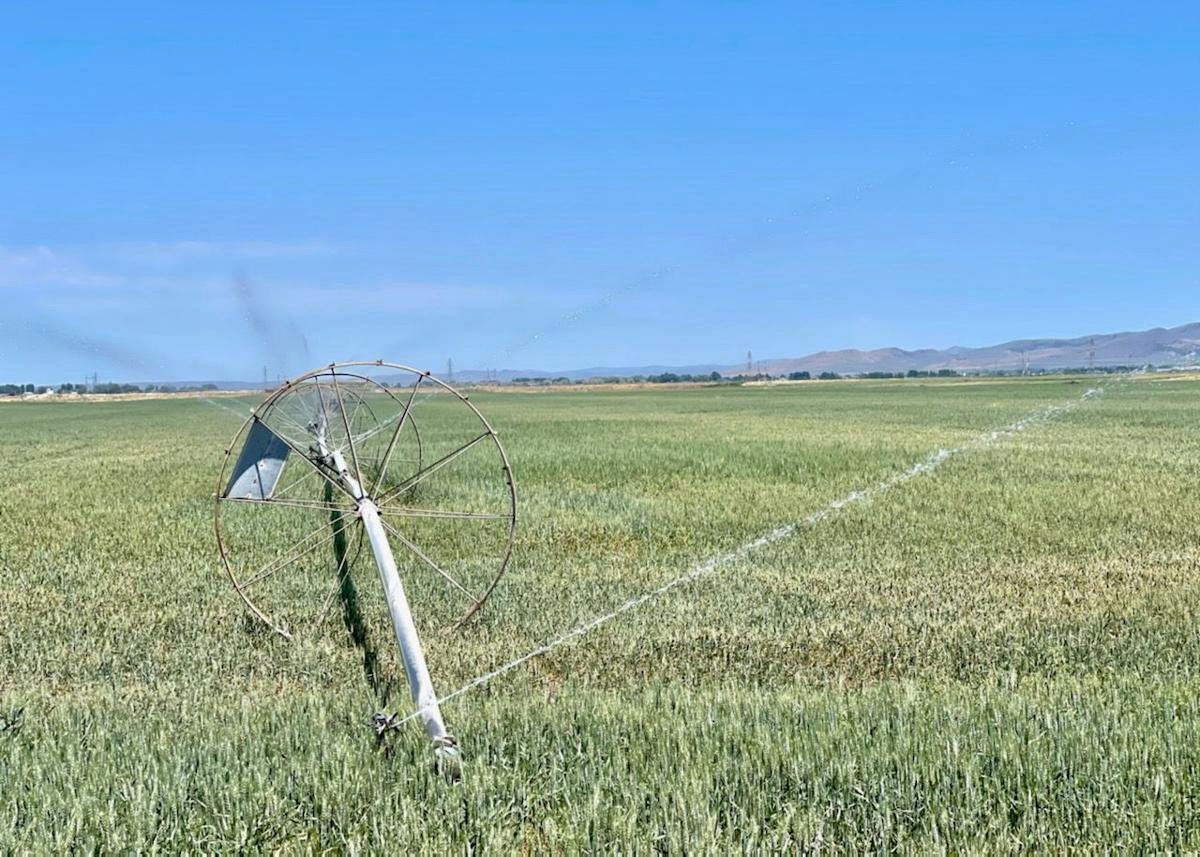 An alfalfa field is irrigated near the Pocatello Regional Airport. 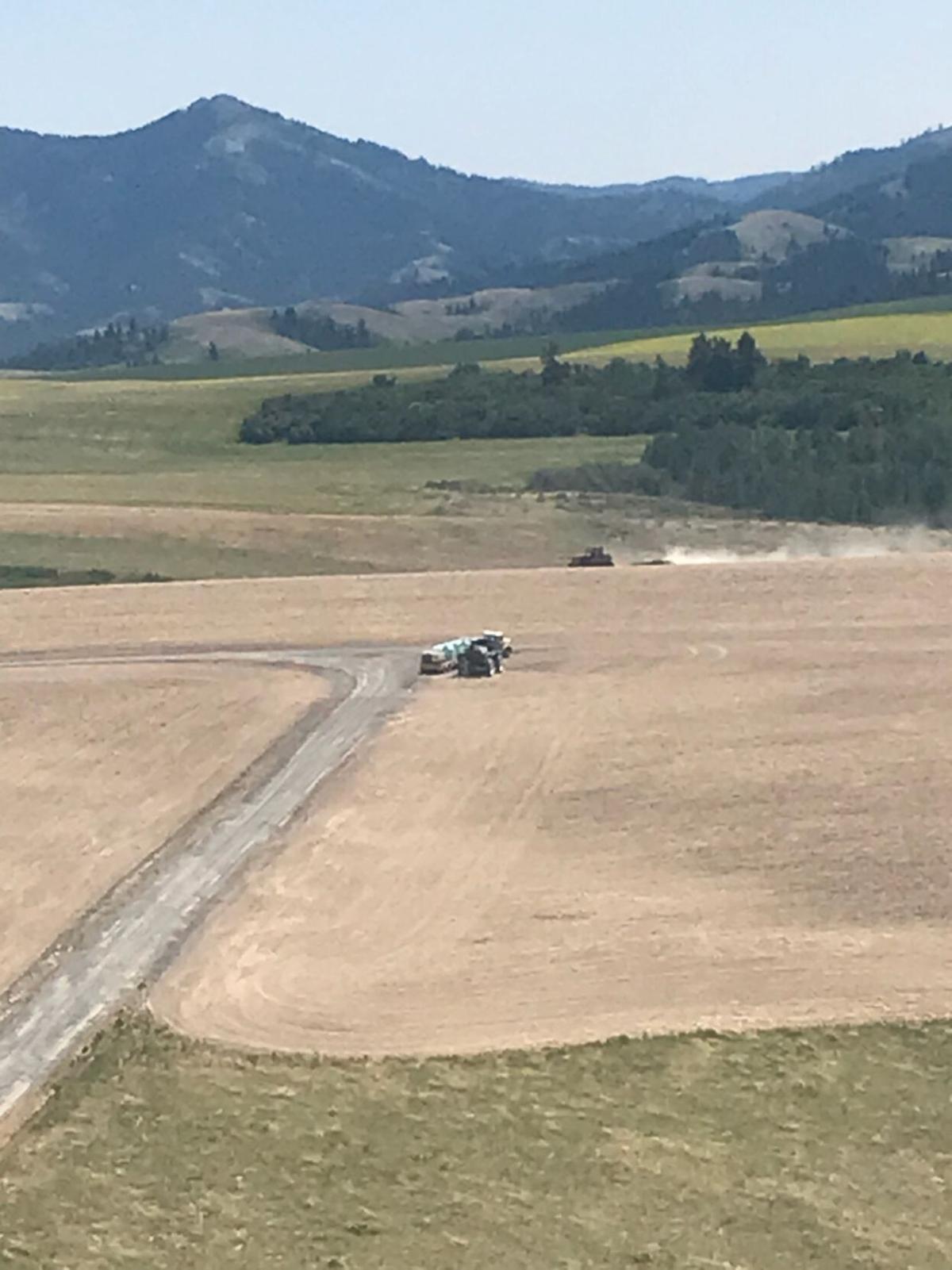 A farmer can be seen plowing weeds in preparation for planting fall wheat in a dry-land field in American Falls from the vantage point of a tower within a wind farm.

Dry-land grain can be seen growing from the top of a wind turbine tower in American Falls.

Water levels are low at the Willow Bay Marina on American Falls Reservoir due to hot and dry conditions. The reservoir is now at about 44% of capacity.

Wheat grows thin on dry land near American Falls. Hot and dry weather has hurt yields for dry-land farmers throughout the region.

Water pours from the end of a wheel line recently moved on an alfalfa field near Pocatello Regional Airport. Hot and dry weather has set back crops throughout the state.

An alfalfa field is irrigated near the Pocatello Regional Airport.

A farmer can be seen plowing weeds in preparation for planting fall wheat in a dry-land field in American Falls from the vantage point of a tower within a wind farm.

Cory Kress keeps careful, year-round records of all the moisture that falls on his dry-land farm in Southeast Idaho’s Rockland Valley.

Lately that’s been an easy job, as he hasn’t had much precipitation to track. During the past year, Kress’ farm has received 5.6 inches of moisture, counting snowpack.

Much of Idaho has been gripped by unrelenting drought and unseasonable heat, threatening irrigators’ water supplies and shriveling crops raised on dry-land farms, which rely exclusively on natural precipitation. Cattlemen have also been hard hit, facing poor pasture conditions and the prospect of feeding expensive hay to livestock that will likely have to be moved prematurely from their range.

“It’s bad. The cattlemen are probably in the worst shape,” Kress said. “I talked to a friend. His aunt sold off 400 head. They’ve got no place to put them.”

The U.S. Drought Monitor for June 21 listed about a third of Idaho as being in severe drought — including a small band in the far southeast corner, a portion of the northern panhandle and a diagonal swath through the central mountains from the southwest corner to Clark County in the east. Most of the state was listed in moderate drought; a sliver along the panhandle’s western edge and a circle covering parts of Blaine, Custer, Butte and Camas counties was classified as being in extreme drought. A smaller bullseye by the border of Blaine and Custer counties had deteriorated to exceptional drought

Kress said the growing conditions are as bad as he’s ever experienced.

He’s hopeful that he’ll harvest half of his normal yields on fall wheat planted on fallow ground. He’ll need some timely rain to salvage a safflower crop. The June heat has stymied his mustard, canola and pea acres.

“There are places where we’re not event going to make a head on continuous crop ground,” Kress said. “... The irony of all this is prices are decent for the first time in about 10 years.”

Idaho barley farmers enjoyed record yields in 2020. It’s clear to Idaho Barley Commission Executive Director Laura Wilder this season will be much different, due to the hot and dry weather.

As part of the budgeting process for Fiscal Year 2022, Wilder said the IBC board recently estimated the state’s barley production will drop from 55 million harvested bushels last season to 48 million bushels this season.

“Growers in dry-land areas are reporting some fields may be a total loss, and some growers in other regions of the state are faced with water shortages that may affect their barley crop,” Wilder said, adding the hot and dry weather could potentially pose quality concerns, as well.

Hans Hayden farms dry land near Rockland in the Arbon Valley. Amid the June heat, the low temperature dropped suddenly below freezing on one night, adding frost damage to Hayden’s list of concerns. He’s pleased to see fields of both winter and spring wheat heading now. He expects his yields will be between a third and half of his average.

“Some of it is doing better than I expected. Other (crops) are just drying up,” Hayden said. “(Crops) that are not wheat are just really struggling.”

John McNabb, who farms dry land between Pocatello and Inkom, said stress is causing his spring grain to head a bit early. He practices no-till farming, which he believes has helped him increase his soil organic matter and better hold moisture.

“On our wheat, our dry farm is holding OK right now but we do need some rain soon on it,” McNabb said. “... I have confidence that we’ll be OK. I’m not expecting a bumper crop, but I have faith we’ll be OK.”

Meteorologists, however, see little relief in sight. National Weather Service meteorologist John Hinsberger said the extended outlook for the next three months calls for a continuation of below-normal precipitation and above-normal temperatures.

A June 20 report by USDA’s National Agricultural Statistics Service found that statewide, only 31% of pasture was considered to be in good condition or better. More than half of Idaho’s barley and spring wheat acres were listed as being very poor to fair in quality, and 72% of the spring wheat crop was classified as very poor to fair.

“The spring crop is going to be tough, particularly on dry-land acres,” said Cathy Wilson, director of research collaboration with the Idaho Wheat Commission. “The irrigated guys are going to be OK as long as they don’t get any calls on their water.”

Wilson said a dry-land farmer in Caribou County recently told her his area hasn’t received rain in two months. Wilson said that farmer expects to have a crop but yields should be down dramatically.

Wilson said farmers throughout the Pacific Northwest are concerned the heat stress will elevate soft white wheat protein levels above standards, resulting in widespread payment reductions. She anticipates low-protein wheat will be drawn from the domestic market and used to blend down protein levels in export wheat.

The sudden shift toward drought conditions caught many farmers who use irrigation off guard, explained Tony Olenichak, water master for Water District 1, which covers the Upper Snake River Basin.

Olenichak explained April 1 is typically the peak date for snowpack and usually offers farmers a good indicator of the water year to come. On that date this season, snowpack was only slightly below normal and reservoir carryover was decent. Irrigators had every reason to expect reservoirs would fill and they’d have full storage allocations, Olenichak said.

Instead, the weather turned dry, irrigation demand peaked early and junior reservoirs didn’t fill. Some canal companies, especially those with junior storage rights in Palisades Reservoir, were granted just 3% to 4% of their normal storage allocations. Olenichak said canal companies that depend on natural flows, including some in the Rigby and Ririe areas, also face the likelihood of shutting off before crops have finished.

“I’ve heard some canals certainly don’t have a full supply of water this year and they’re going to throttle back now and allow users to divert half of their water so they can save some toward the end of the year,” Olenichak said, adding other canal companies have sent notice to members of plans to shut off by mid-August.

Along the Portneuf River, which is flowing at half of its usual volume for this time of year, many irrigators have been given notice that their water rights may be curtailed under a water call filed years ago by the Surface Water Coalition.

The Upper Snake Reservoir system is faring far better than the Wood River system, where Magic Reservoir is nearly depleted of water. The Upper Snake system is currently filled to about 72% of capacity. American Falls Reservoir, however, has already been drained to 44% of capacity and should dip below 10% before the season’s end, Olenichak said.

There won’t be much rental water available at the end of the season for farmers who run out of water, he added.

“Because we had such good carryover from the end of last year, I think most people (who farm with irrigation) will get through this year just fine,” Olenichak said. “Certainly some out there will lose their crop.”

For farmers with an ample irrigation supply, such as Doug Finnacle, of Pingree, the 2021 season has mostly been business as usual.

“To this point, there hasn’t been an issue,” Finnacle said. “I believe in general the crops are good. Everything now — the spuds, the beets, the hay — everything has caught up and is doing well on irrigated ground.”

Olenichak’s greatest concern is about what will happen if the dry weather continues through the coming winter and into next season. That would make it tough for irrigators with junior rights, including well irrigators throughout the Eastern Snake Plain, to secure mitigation water needed to avert sweeping water calls.

“If we have a repeat of the (sparse) snowpack and dryness, next year is going to be the big crop loss,” Olenichak said.

Eastern Idaho Public Health has an