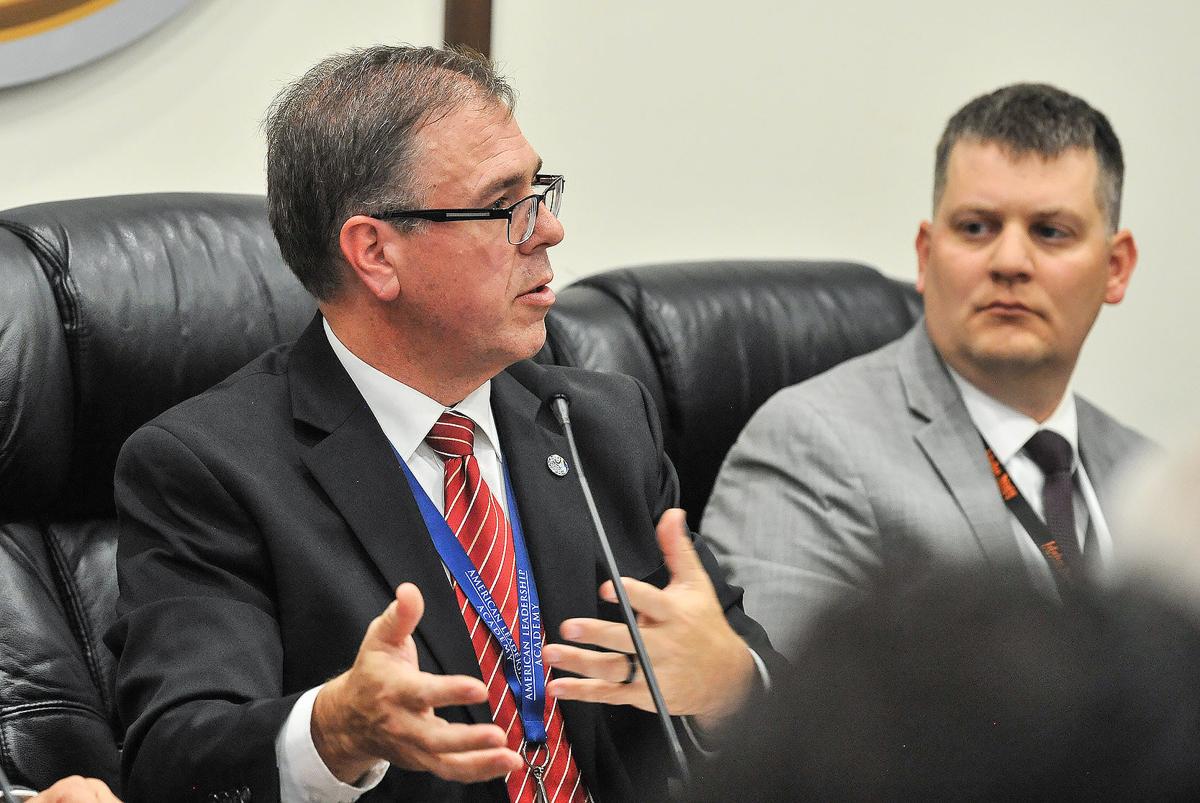 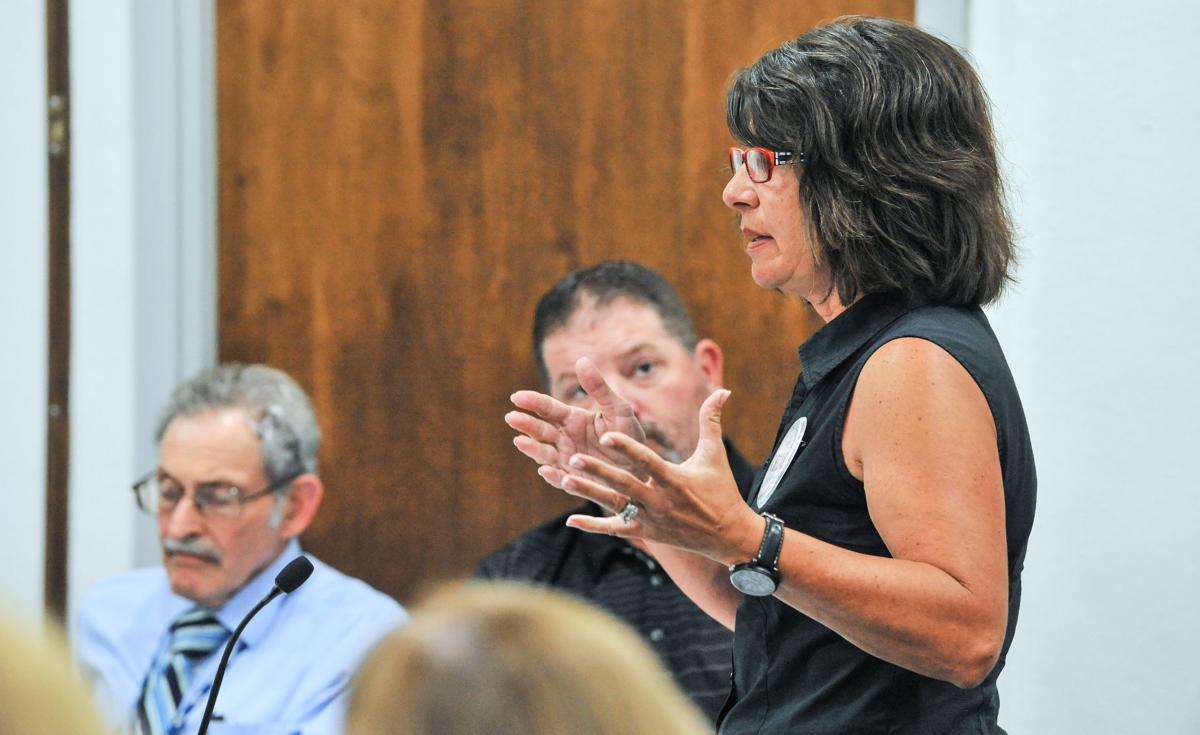 Pocatello resident Claudia Ortega asks questions during a recent Bannock County Commission meeting at the Bannock County Courthouse in Pocatello. Ortega is the leader of the citizens group that is trying to recall the county commissioners as well as Assessor Sheri Davies. 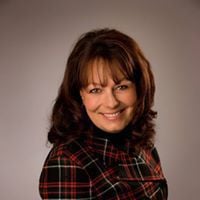 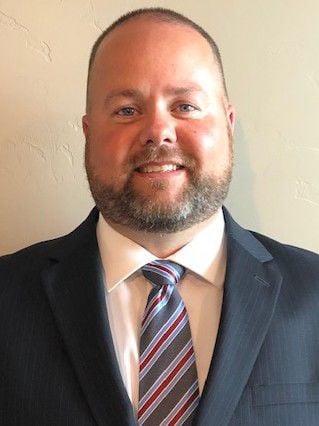 Pocatello resident Claudia Ortega asks questions during a recent Bannock County Commission meeting at the Bannock County Courthouse in Pocatello. Ortega is the leader of the citizens group that is trying to recall the county commissioners as well as Assessor Sheri Davies.

For the first time since Bannock County residents learned in June that their property assessment notices were going to be mailed 18 days late, the Bannock County Commission announced at Wednesday’s meeting that it wasn’t just computer software issues that were responsible for that delay.

Bannock County Commission Chairman Steve Brown said that a forensic audit into the work done for the Assessor’s Office by former contracted appraiser Kevin Franck was partially at fault.

Steve Brown made that revelation after George Brown explained that Bannock County was one of 19 counties in Idaho that were not in compliance in various property assessment categories related to the state requirement that property assessments be a 100 percent match with actual property values from the previous year.

“What happened uniquely in Bannock County was the fact that our notices were delayed,” Steve Brown said. “There are numerous reasons for that.… The first one was a forensic audit that we conducted regarding an independent contractor and the conduct (of that contractor). And that was done in the early part of 2019.”

Steve Brown said that while Bannock County officials were conducting the forensic audit, many of the files needed for the Assessor’s Office to conduct property reassessments were unavailable. This delayed the reassessment and contributed to the new assessment notices being sent to county property owners 18 days late, Steve Brown said.

The audit Steve Brown is referring to was first revealed to the public via a press release from the county commissioners on July 11, a few days after the Idaho State Journal reported that Franck had filed a lawsuit in U.S. District Court against Bannock County alleging a breach of contract.

Among the approximately 75 county residents present at Wednesday’s meeting was Pocatello resident Claudia Ortega, the leader of the Pocatello/Bannock County Homeowners’ Alliance, a citizens group aimed at recalling Davies and all three Bannock County commissioners over the botched countywide reassessment.

During a phone interview with the Journal after the meeting, Ortega voiced concerns about how the county has continuously changed its story on the botched countywide reassessment that resulted in many county property owners experiencing massive increases in their assessed property values.

“Every time you talk to one of these people at the county you get an additional tidbit. They can’t just pull back the curtain and tell us exactly what is happening,” Ortega said. “People are ticked off because they don’t feel like they are getting the truth and all the information. Everything is piecemeal. There is no reason the county couldn’t have told us about the software issues and audit well before the notices were mailed so late.”

Though property assessments throughout much of Bannock County increased on average 20 to 40 percent as a result of the countywide reassessment conducted earlier this year by the Assessor’s Office, the Tax Commission’s Dornfest said that data provided to the Idaho Tax Commision this week showed that the reassessment will succeed in putting Bannock County in compliance regarding property assessments matching market value.

Dornfest also guaranteed that because most county property owners saw increases to their property assessments, the property tax rates levied by various Bannock County taxing entities, such as school districts and cities, will decrease. This means that the increases in assessed property values in Bannock County as a result of the countywide reassessment will not automatically mean that people will end up paying more property taxes, Dornfest said.

Those interested in estimating how their assessed home values will impact the actual amount of property taxes they will pay can do so at the following link: tax.idaho.gov/i-1072.cfm.

Moreover, Bannock County has compiled detailed information about the changes it made to assessed property values during the countywide reassessment and that information is accessible at the following link: bannockcounty.us/bta-appeals/. An interactive GIS map that shows the changes in assessed property values throughout the county as a result of the reassessment is accessible by visiting the following case-sensitive link: bit.ly/2Tfq7o4.

George Brown said the Idaho Board of Equalization will start meeting Monday and will have completed its process by Aug. 26. At that point, all the assessed property values in the entire state should be equalized and taxing districts within each respective county can begin setting the levy rates that dictate how much property taxes residents will pay.

Bannock County expects to mail out its property tax bills to county property owners in November.

Many more county residents signed petitions at the Revive @ Five concert in Old Town Pocatello on Wednesday evening, Ortega said. So far, Ortega said her group has over 2,000 signatures to recall Davies and is approaching that same number for each of the commissioners.

To get the recall initiatives added to the November election ballot, Ortega has until Sept. 16 to submit to the county clerk the required 9,101 signatures from Bannock County registered voters for each of the four county officials her group wants to recall.

If the Pocatello/Bannock County Homeowners’ Alliance can’t meet the Sept. 16 deadline, the recall initiatives would show up on the March 2020 presidential primary election ballot as long as the group turns in the necessary signatures for the Davies recall to the county clerk by Oct. 2 and for the county commissioners recall by Oct. 9.

Ortega said Wednesday’s meeting only reinforced her mission to recall Davies and the county commissioners.

“Nothing has been resolved,” Ortega said. “People still haven’t had their state appeals and many people will never get a chance because of the way the county denied our due process. We’re not quashed at all. I walked out of there justified in exactly what we are doing.”

POCATELLO — At the most critical juncture in the property tax assessment notice development process, staff at the Bannock County Assessor’s Of…