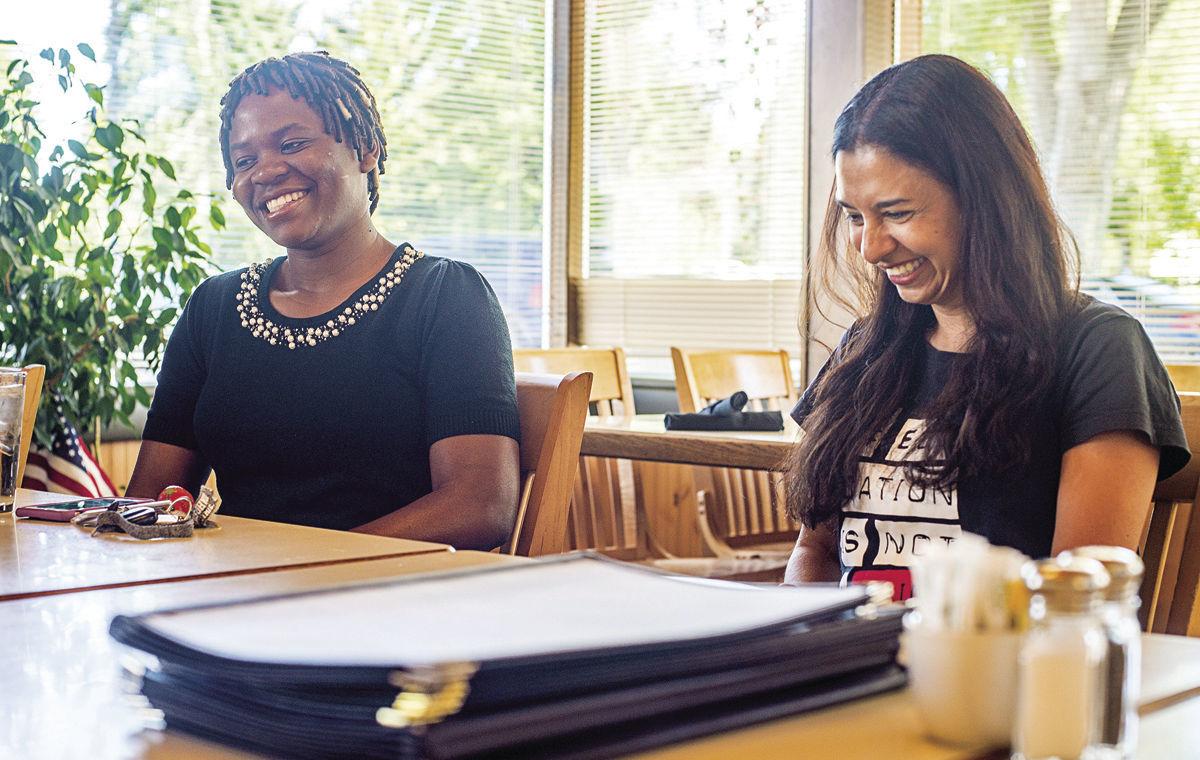 In this June 2018 Journal file photo, Mary Lupumba, left, who came to Idaho from Zambia in 2015 through the College of Southern Idaho Refugee Program, shares a laugh with Iranian refugee Mona Heern in Pocatello. The Pocatello City Council recently affirmed Pocatello's commitment to resettling refugees.

In this June 2018 Journal file photo, Mary Lupumba, left, who came to Idaho from Zambia in 2015 through the College of Southern Idaho Refugee Program, shares a laugh with Iranian refugee Mona Heern in Pocatello. The Pocatello City Council recently affirmed Pocatello's commitment to resettling refugees.

Though you won’t find the word “refugee” in the Bible, many people consider baby Jesus and his parents as such following the Holy Family’s flight into Egypt to escape Herod’s massacre.

In the spirit of Christmas and along the story of Jesus Christ, earlier this month the Pocatello City Council unanimously approved an ordinance that allowed Pocatello Mayor Brian Blad to send a letter to U.S. Secretary of State Mike Pompeo that declared the Gate City’s consent to being a resettlement location for refugees in need.

“As Mayor of Pocatello … I consent to initial refugee resettlement in Pocatello,” Blad wrote in the Dec. 20 letter. “Pocatello is a community that welcomes individuals from all walks of life. We look forward to the continued opportunity to welcome refugees to contribute to our city, state and nation.”

The day before Blad sent the letter, the Pocatello City Council voted unanimously to affirm Pocatello’s commitment to caring for refugees by way of a city ordinance, a process required of state and local governments that aim to resettle those fleeing war, persecution or natural disasters following an executive order President Donald Trump enacted in September.

In the ordinance, Pocatello acknowledges both the economic and social benefits refugees add to the communities in which they work and live.

“The City of Pocatello, in cooperation with Bannock County and Idaho State University, are part of a pipeline for receiving and resettling refugees to achieve economic independence and to socially integrate as new Americans,” the ordinance says. “During resettlement, refugees relocating to Bannock County receive some federal funds, local donations, scholarship money and other support that is generally spent and ISU and within our community. The City of Pocatello is dedicated to helping sustain admittance and support of refugees into Idaho and subsequently the City of Pocatello.”

During the City Council meeting, Larry Gebhardt a Pocatello-based refugee advocate and president of the Southeastern Idaho nonprofit group BRIDGES, addressed the need for the city to continue its support of refugees. BRIDGES stands for Building Refugee Independence by Connecting Communities and Cultures and works primarily as a liaison and advocacy group, connecting refugees with various services and resources within local communities.

Gebhardt says Pocatello has a small community of refugees, most of whom have come from Central African countries to seek educational opportunities at ISU. Many of the refugees living in Pocatello are resettled through the College of Southern Idaho Refugee Program.

After they are settled, BRIDGES works to help foster relationships and make easier the lives of refugees after they have received their first eight months of assistance from the federal government, which includes addressing basic housing, transportation, employment and healthcare needs.

“After this eight-month period, the expectation is that these refugees will be economically self-sufficient and beginning to integrate into U.S. society as a new American,” Gebhardt said. “The types of jobs refugees start out with is usually manual labor — shoveling manure at a dairy or packing boxes at the Chobani yogurt plant. But with time, essentially all of the refugees have the goal to pursue some type of technical or career education. BRIDGES helps refugees along the path toward pursuing that goal.”

In addition to helping refugees build contacts and friendships with employers, educators and other community members, BRIDGES volunteers work to advocate for continued federal funding for refugees and, as evidenced by Pocatello’s recent ordinance, ensure local communities continue to support refugees.

“We’ll buy flashcards to help these refugees better their English speaking skills, coordinate with local clergy leaders and when we find a refugee with a particular set of skills then we will find a way to help them get a foot in the door for employment,” Gebhardt said. “We’ll also assist families in getting their children enrolled in public school or communicating with local Realtors when a family has entered the housing market.”

Though she was not a refugee who initially resettled in Idaho, ISU adjunct professor Mona Heern escaped persecution from Tehran with her family and is one example of how a refugee strives to become a contributing member to the new society in which they migrated.

Just a child when the Iranian revolution erupted, Heern and thousands more of the Baha’i faith were banned from attending colleges and universities. That’s a law that still stands today.

The revolutionary government — in addition to forcefully releasing many Baha’is from their jobs, closing Baha’i schools, and destroying Baha’i temples and cemeteries — also jailed and executed Baha’is because they did not belong to the state religion. After her father’s execution in 1986, Heern, along with her mother and younger sister, chose to flee Tehran in pursuit of a conflict-free life.

Heern, who holds two master’s degrees and teaches English and education classes at ISU, said she was proud Pocatello made what she called the right choice in continuing its commitment to local refugees.

“It’s the right thing to do, it is the humanitarian thing to do,” Heern said about Pocatello’s ordinance and Blad’s letter. “To me it is always fascinating, especially during the holiday season, because we give our children so much. But how often do they get to hear stories about people who have endured terrible things and have remained resilient?”

Heern continued, “For me, any time a city such as Pocatello opens their arms and their hearts to refugees, not only are they showing their humanity — showing that they believe we are all members of one human family — but are also bestowing on their community this gift of welcoming people of so much strength, integrity and love.”