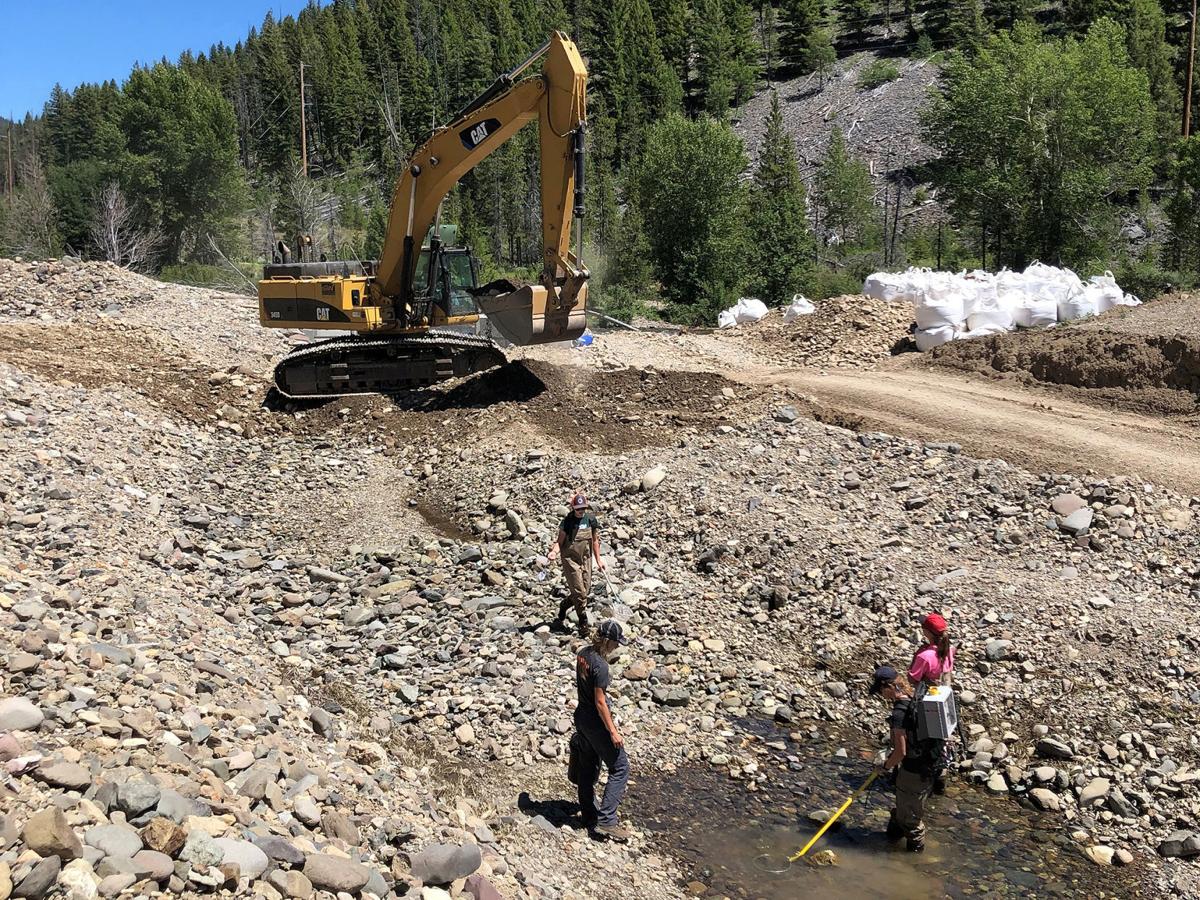 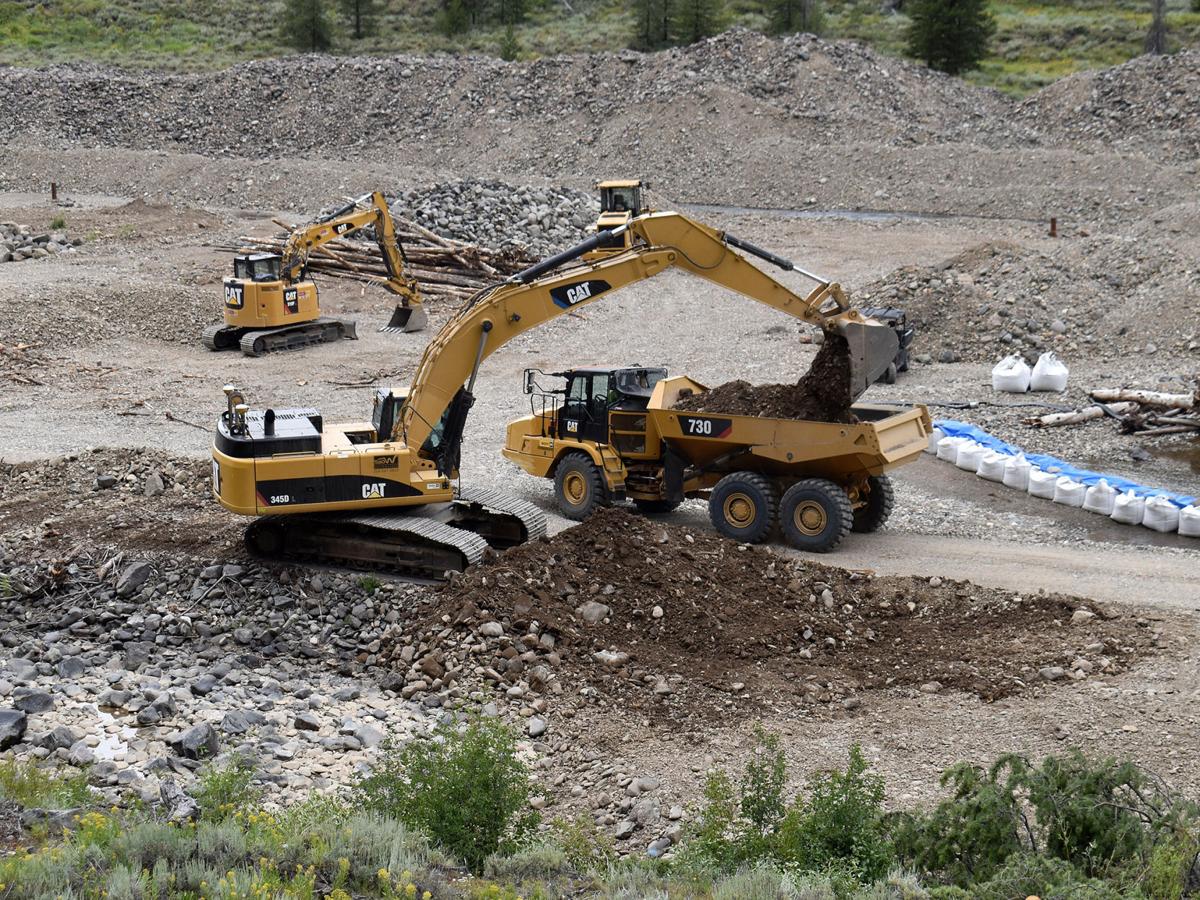 An excavator and haul truck work to create a new river channel and floodplain from the old mining tailings along the Yankee Fork of the Salmon River.

An excavator and haul truck work to create a new river channel and floodplain from the old mining tailings along the Yankee Fork of the Salmon River.

A 10-year restoration project to repair catastrophic ecological damage to the Yankee Fork of the Salmon River is expected to be mostly concluded this summer.

The Bonanza project has seen about 100,000 cubic yards of old mining tailings removed from the area in an effort to restore the Yankee Fork and offer Chinook and steelhead improved habitat.

“This project is significant because it substantially improves the health, diversity, and productivity of the Yankee Fork watershed,” said Heath Perrine, a ranger on the Challis-Yankee Fork district.

Gamett said the timing of heavy construction work on the Yankee Fork is limited by nature.

“We have a fairly narrow window we can actually do that work because the steelhead spawn in that area in the spring and their eggs hatch in the early summer,” he said. “Then the Chinook come in and spawn in the fall. Their eggs are in the gravel through the winter and early spring. So there’s only about a one month window we can actually do stream work in the Yankee Fork without it having significant effects to the Chinook and the steelhead. That runs from July 8 to Aug. 15.”

The project is an effort to repair damage to the stream caused by a gold mining operation between 1940 and 1952. The dredge tore up 5.5 miles of the river bed. The Yankee Fork dredge still sits in the canyon as a museum of a bygone era.

“I don’t want to speak too negative,” Gamett said. “It was a different time. Part of that was coming at the end of the Great Depression and the beginning of World War II. It certainly provided employment opportunities for people and helped Idaho’s economy. Yet the impact on the Yankee Fork — the valley floor, floodplain and the channels — it was just devastating. It significantly reduced the ability of that section of river to support fish. Those dredge tailing piles are so big that the river doesn’t have the power to move through them and do what it would normally do.”

Not all of the tailings left by the dredge have been removed, said Amy Baumer in a news release about the project. About 7 acres of tailings near the dredge are “being left in place to help preserve the mining history of the area and maintain the historic setting of the dredge.”

Visitors to the area can expect heavy equipment operating during the next few weeks and the project may cause short traffic delays, Baumer said.

“A lot of people feel very strongly about those dredge tailings,” Gamett said. “Their dad or their grandpa or uncle worked on the dredge. It was a way that they helped provide for their family. They see a lot of value in the dredge tailings and the history of that area.”

Gamett said it is costing substantially more to clean up the destruction than the value of the gold that was removed. According to the Yankee Fork Dredge website, the operation extracted $1,023,024.89 in gold and $14,298 in silver.

“They didn’t give a lot of consideration back then to some of the other values that we find are important today, like fish,” he said. “That’s been one of the big challenges with all the work that we’re doing up there, from an ecological perspective that dredge mining and the legacy of that has been catastrophic on the river.”

Spawning salmon once numbered in the thousands in the Yankee Fork. Today, the Shoshone-Bannock tribes operate a trap that allows them to count migrating salmon before they are released back into the stream to spawn.

“I would not expect there to be more than 30 fish come into the Yankee Fork this year,” Gamett said.

Gamett said the project is only one piece of the puzzle to save Idaho’s declining salmon and steelhead.

Gamett said the lion’s share of work will be completed this year and there will be some replanting of vegetation next season.

The acres of tailings hauled out of the site have not gone to waste. Custer County crushed some and used it to resurface a section of the Yankee Fork Road. A private contractor took the rest to crush up and sell in his business.

The Bonanza project, which covers about 46 acres, is located on both private land owned by the J.R. Simplot Company and national forest land administered by the U.S. Forest Service.