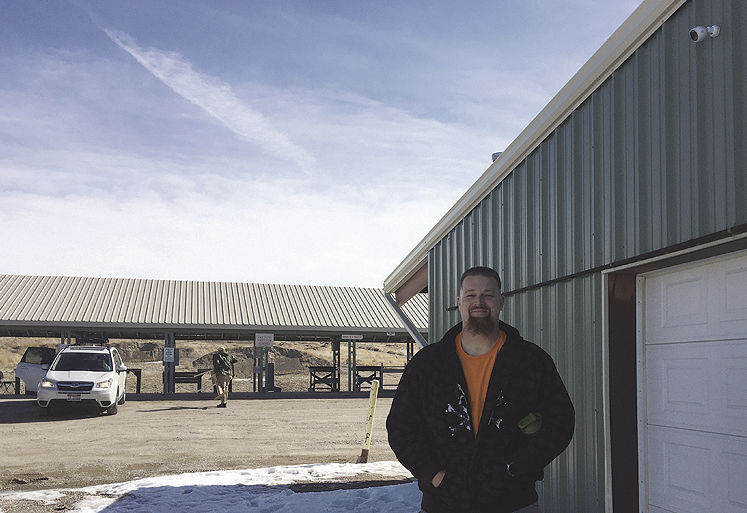 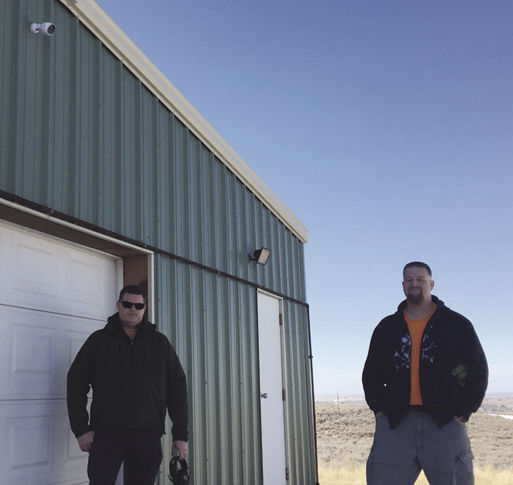 Mike Wheelock, left, treasurer for the Gate City Sport Shooting Association in the Chubbuck area, stands next to association President Adam Sorenson with a new webcam on the upper left of the building next to them. The webcam lets people check online to tell if there are open shooting bays at the group’s Oregon Trail Shooting Range before they drive there.

Mike Wheelock, left, treasurer for the Gate City Sport Shooting Association in the Chubbuck area, stands next to association President Adam Sorenson with a new webcam on the upper left of the building next to them. The webcam lets people check online to tell if there are open shooting bays at the group’s Oregon Trail Shooting Range before they drive there.

The Gate City Sport Shooting Association has installed a webcam to let people know how crowded the group’s Oregon Trail Shooting Range is before they drive there, according to association Treasurer Mike Wheelock.

The camera was mounted Feb. 17 on the peak of a building at the Chubbuck area shooting range and offers an overall photo of activity for those thinking of going there to shoot targets, Wheelock said.

“It takes a look downrange down this road so people can see if there’s a bunch of cars parked there,” Wheelock said. “And they’ll know if it is busy or not.”

That will reduce the instances when people drive to the site off 2 ½ Mile Road to do some practice shooting only to find there are no spaces left open in the shooting bays. That can be frustrating.

“It can be you come out here at peak times, especially on a Saturday, and sometimes you might wait for a bay, wait for somebody to clear it out,” Wheelock said.

He says the bays, which are open seven days a week during daylight hours only, are offered on a first-come, first-served basis.

And he’s personally experienced those times when he’s also come out to do some shooting and hasn’t been able to get into a shooting bay.

Members, who pay $75 a year to be in the 30-year-old organization, receive a key to get into the gate whenever they want.

But it still gets difficult when space is lacking. That led to action.

“We put out a survey at the end of 2019 to our membership and got a bunch of comments and feedback,” Wheelock said.

And one of the big complaints was that people said they come up to shoot sometimes and can’t find an open shooting bay.

So Layne Dustin, who was president at the time, came up with the idea for the camera, according to Wheelock.

Thus the camera, which only takes a single snapshot to avoid going over the association’s data cap of 25 gigabytes, will let shooters know in advance if they’re likely to get into a shooting bay.

But it’s not cheap. It costs the association $100 a month for internet, in addition to the $2,000 one-time payment to buy the camera.

There is also a main firing line for shooters, but it’s a shared firing line. And it requires flipping a switch to shut down the entire firing line whenever they need to change targets, he said. That’s inconvenient.

So current association President Adam Sorenson, who notes that the group also works to get shooters with disabilities a chance to shoot at the range, says the camera is essential.

And the reaction from association members has been positive.

“Everyone loves them,” Sorenson said. “They are super happy.”

He’s had lots of people tell him that they like not having to guess and take a chance that they will be able to get onto the range to shoot.

Plus, he says the camera picture shows just enough to tell if there will likely be an open shooting bay, but without revealing too much.

“It shows you just enough that you can tell if it’s really busy or not, but not enough that it’s compromising anyone’s privacy rights,” Sorenson said.

Meanwhile, the association, which welcomes new members, is also looking to further enhance security against the potential for vandalism and related issues at the site through the use of an RFID electronic fence.

“That way it would make things a lot more secure around here,” Sorenson said. “And we would be able to know who comes and goes.”

He says that would give them a record that the association and Bannock County could access if needed in case anything adverse ever happened at the range such as vandalism or other issues.

“I love my rights, but I do not love criminals and people that break the rules because they jeopardize our ability to maintain our property and our rights,” Sorenson said.

That’s not too common at the site, though, where enthusiasts enjoy getting together to hone their skills.

Sorenson said that members abilities are interesting to see.

“I’ve met really good people out there,” he said. “You should see some of the skills these guys have — it makes me want to shoot better.”

And he says the club will continue to make further improvements while also working to support community partners such as the Bureau of Land Management, Idaho Fish and Game, Bannock County law enforcement, the Pocatello Field Archers and the Pocatello Trap Club.