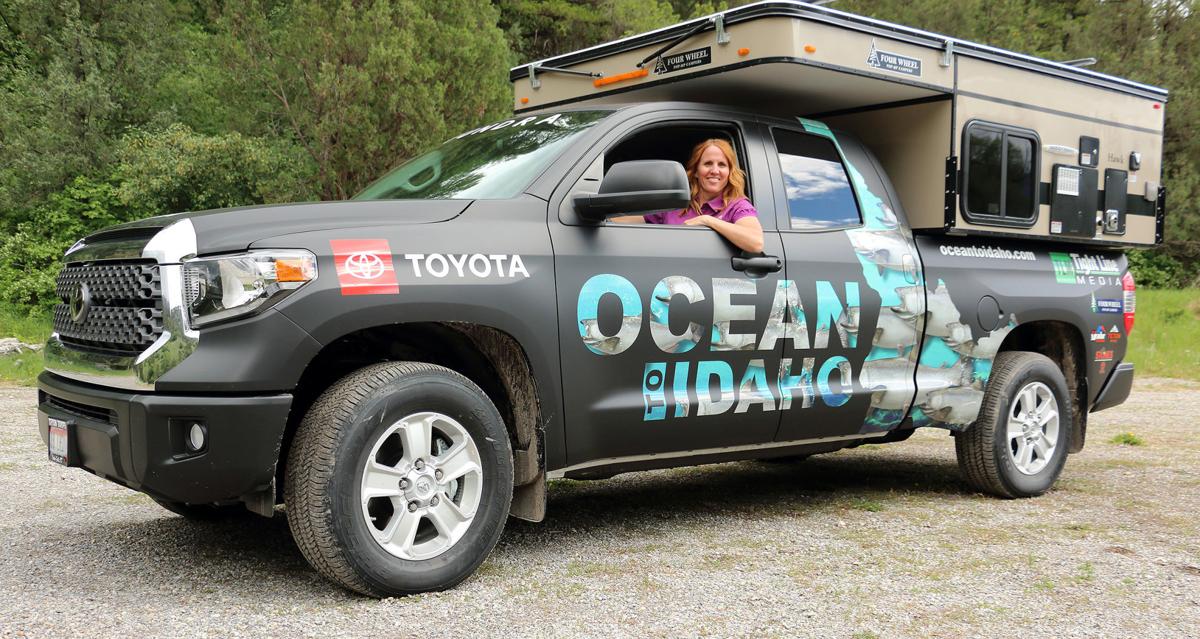 Kris Millgate is following the Idaho salmon migration from the mouth of the Columbia River to the Yankee Fork of the Salmon River this summer. 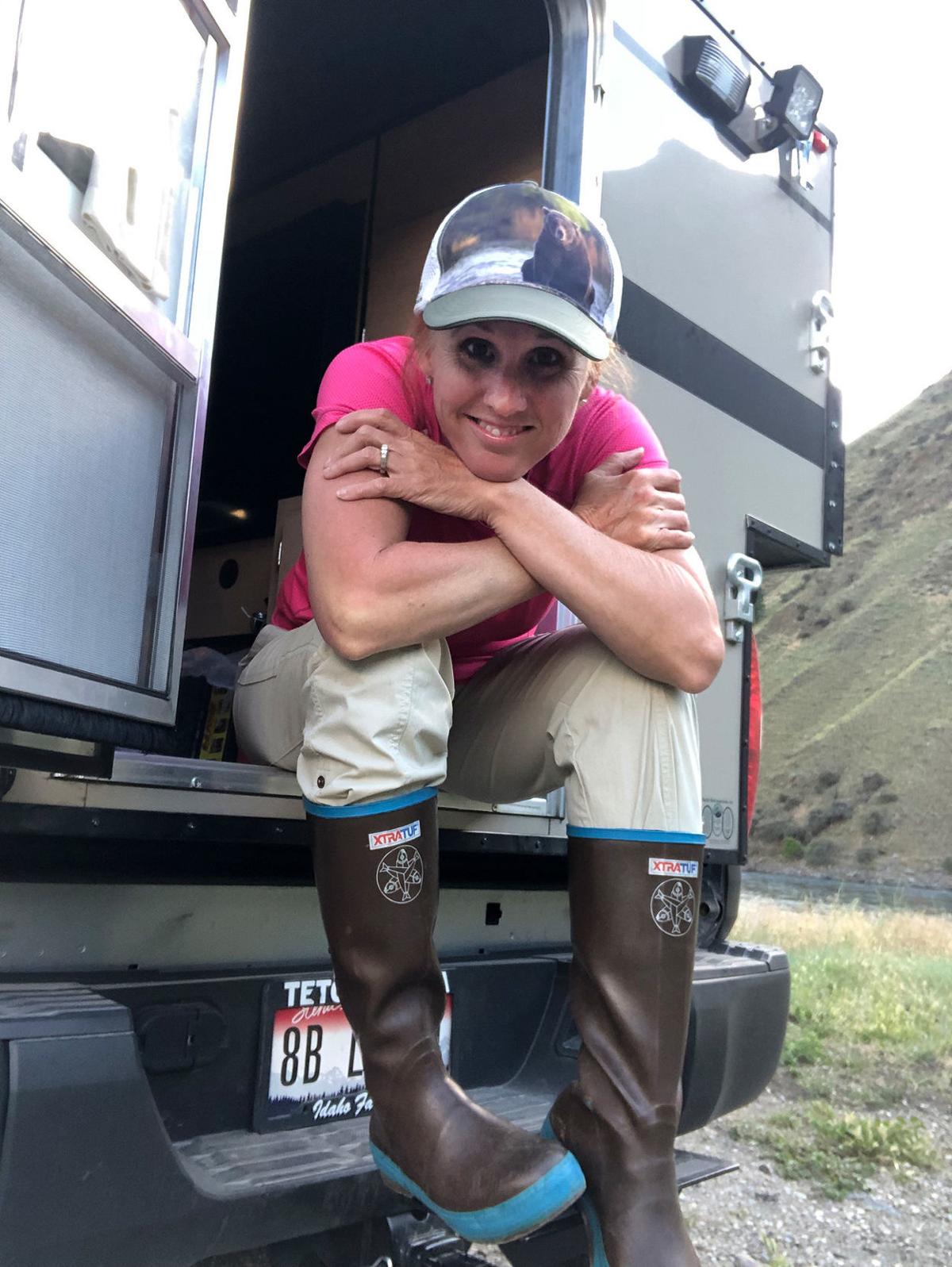 Kris Millgate poses on the back of the pickup/camper she is using to follow the migration of Idaho salmon from the mouth of the Columbia River to Idaho spawning streams. 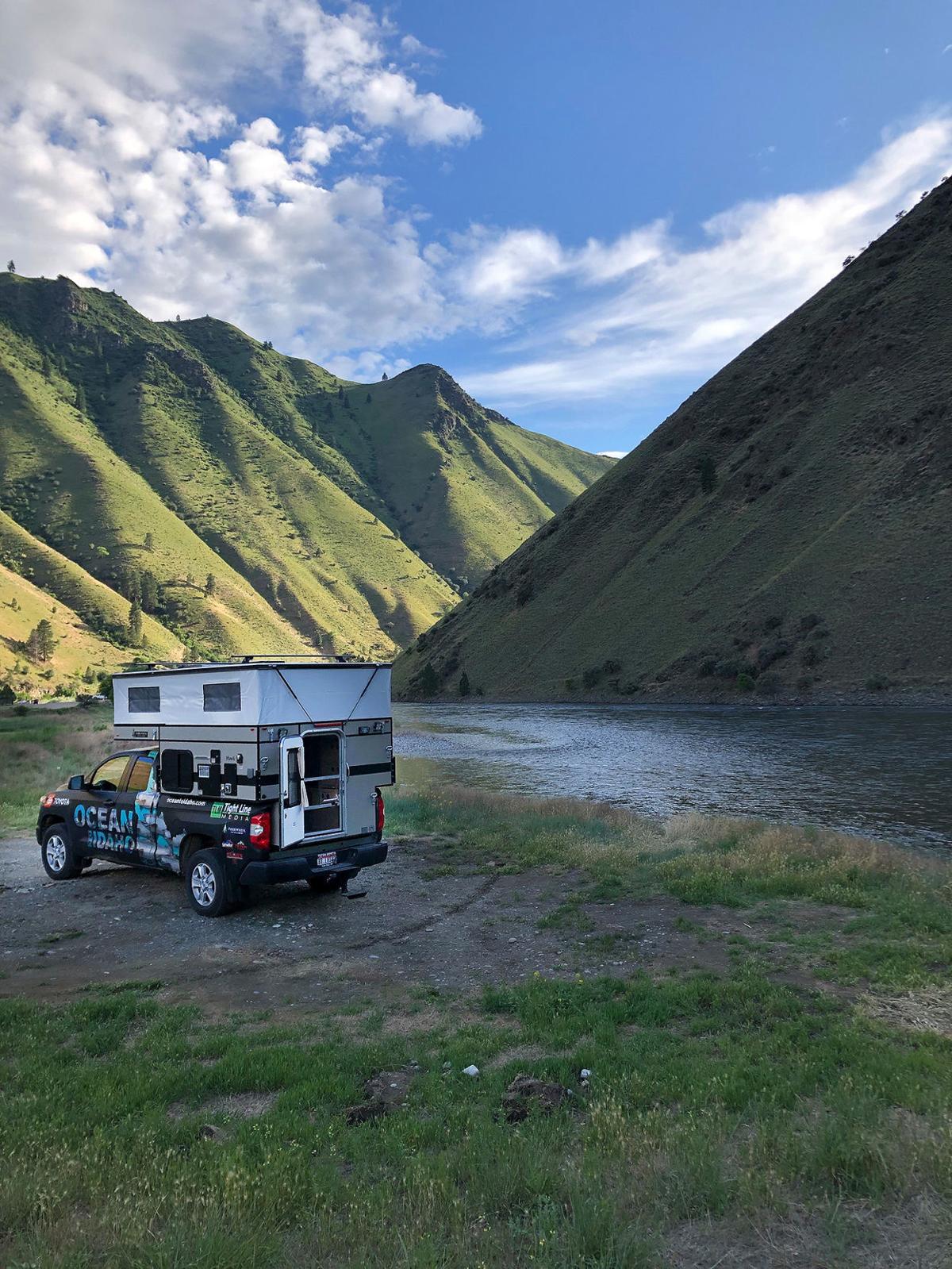 The truck and camper used by Kris Millgate is parked along the Salmon River as she continues her trek to the Yankee Fork.

Kris Millgate is following the Idaho salmon migration from the mouth of the Columbia River to the Yankee Fork of the Salmon River this summer.

Kris Millgate poses on the back of the pickup/camper she is using to follow the migration of Idaho salmon from the mouth of the Columbia River to Idaho spawning streams.

The truck and camper used by Kris Millgate is parked along the Salmon River as she continues her trek to the Yankee Fork.

Kris Millgate has been traveling like crazy lately. Her schedule is relentless, similar to the migrating fish she is following.

There’s little time for showers — maybe every 10 days — just stop for gas and get going. She sleeps by herself in the back of a loaned truck and camper. The outdoor multimedia journalist has been hunting down pertinent people and places along the route of one of the longest fish migration paths in the world, and puts a camera and microphone in their faces, gathering a story to retell. Her project is called “Ocean to Idaho.”

“I’m following salmon,” Millgate said. “I’ve been researching it for months and months and months. I feel like I’ve been living, breathing everything fish. This time of year, you have 15 hours of light. So, you’re working 15 hours, and I go back to my camper and input everything so I’m up all night. It’s kind of like a crazy crunch, but I love every minute of it. I’m not even tired like I think I should be.”

Millgate is inviting people along for the journey via social media posts. You can find them at tightlinemedia.com/oceantoidaho.

The idea for the project came from a broken leg. While couched up for four months she hatched the plan to follow migrating Idaho salmon from the mouth of the Columbia River to their spawning waters in the Yankee Fork of the Salmon River, 850 miles away.

“During that time on the couch I had a lot of time to think about my work and my life, everything I wanted to do and what I hadn’t done yet,” she said. “I knew the end of the salmon route at the Yankee Fork of the Salmon River. I’ve shot that. I was intrigued by the idea of what on earth was it like for salmon to swim from the ocean all the way to Idaho.”

She made her plans, then a pandemic hit and she had to rethink everything.

“That’s adding an extra layer of challenge that I didn’t even see coming,” she said.

Dams were closed, people were staying home, she originally planned on flying places and staying in hotels. As sponsors Northwest Toyota Dealers offered up a Tundra pickup and Four Wheel Campers fitted it with a camper. She would ditch any helpers and go solo.

“When I do interviews, I have masks, I have wipes, I do not touch the microphone to the people,” she said. “They handle it and I sanitize it afterward. There’s all these extra layers that have to go on during a pandemic. It makes the job more challenging. It’s hard enough to travel across the Pacific Northwest and then to add extra layers of pandemic pressure makes it a little bit interesting.”

Her end game is to produce a documentary film to come out next spring and several stories for local media outlets, including the Post Register. She is focusing on Chinook salmon because “no one really remembers being able to fish for sockeye, they remember fishing for Chinook. So, I’m following Chinook salmon.” Specifically, Chinook from the Yankee Fork of the Salmon River. They use the Columbia, the Snake, the Salmon and the Yankee Fork and return by mid-August.

Along her journey she shoots photographs, video, an underwater camera, a drone for overhead, and her phone. “Sometimes two at a time, but if I’m doing my drone, it’s just the drone and same with underwater.”

“I’ve talked with a tribal fisher and her son off of their scaffold,” she said. “They caught their first sockeye of the season. It was for dinner. It was magnificent. They were mostly catching shad. … Watching them off that scaffold is amazing. ... They’ll be there every night for hours on end. They just shove that dip net down into that fast water. If I ever did that it would fling me right into the current. It’s so fast.”

Another thing Millgate has learned during her venture is about fish rest stops.

“I went to a spot where Chinook salmon from the Yankee Fork of Idaho stop as a rest area,” she said about an area downstream from Portland, Oregon. “It’s an amazing chunk of backwater that used to be like a pasture for cows. It’s been restored and fish come in there. What they’ve discovered is that everyone thinks that salmon head straight to the ocean and they don’t stray. Or they head straight back to Idaho and they don’t stray. But they do. They stray into estuaries. They’ll hold in these safe backwaters. It’s just like a rest stop. Then they’ll get back on the route. They take these little detours to get a break.”

Besides closely following the fish, Millgate is interviewing other stakeholders along the way. The commercial fishermen, sport fishers, tribe fishers, the Corps of Engineers, dam operators, scientists, hatcheries operators, historians and more.

One big issue that comes up is the impact of dams on the fish.

“There are so many dynamics to this,” she said. “Of course, what comes up is the dams, should they stay or should they go? The answer to that is it depends on who you’re asking.”

Millgate said her journey ends in August when the salmon arrive at the Yankee Fork.

“It’s a very packed and tight schedule,” she said. “I have to stay on schedule or I miss something. I’m in country I’ve never seen. The farther you put me from Idaho, the less I know about the landscape and the people. I’m going to put in thousands of miles to follow a fish for 850.”