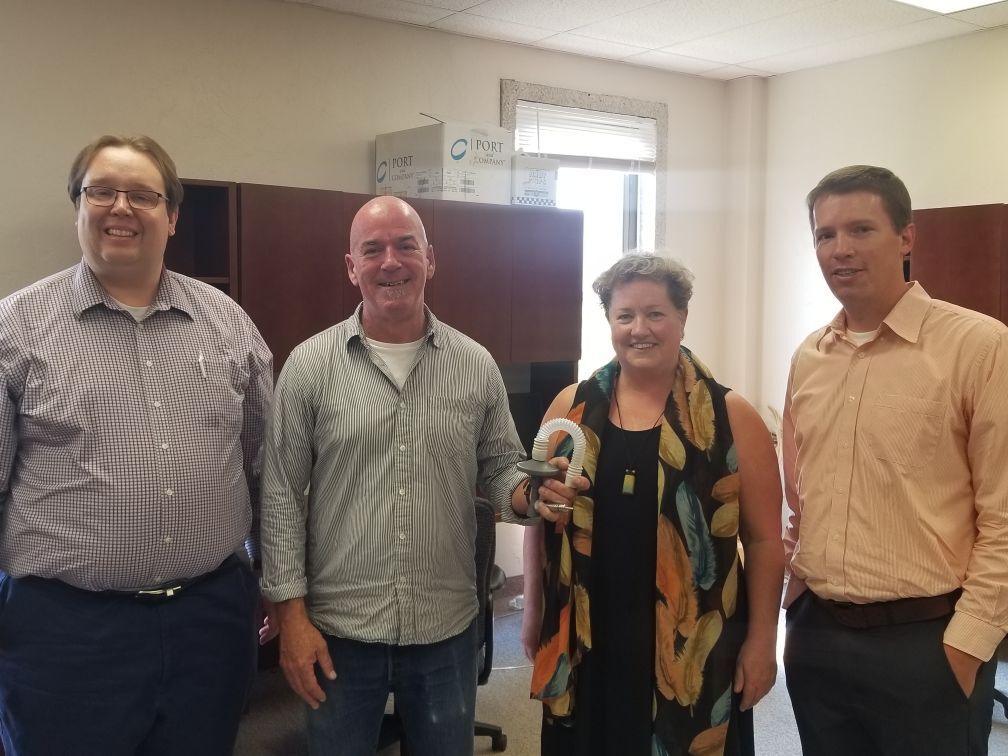 From left, Dan Cravens, Jared Barrott, Kim Reeves and Jeff Dalton pose together. Dalton and Reeves are behind a new invention called the Venspirator, and Cravens and Barrott are helping them test and market it on behalf of Idaho State University. 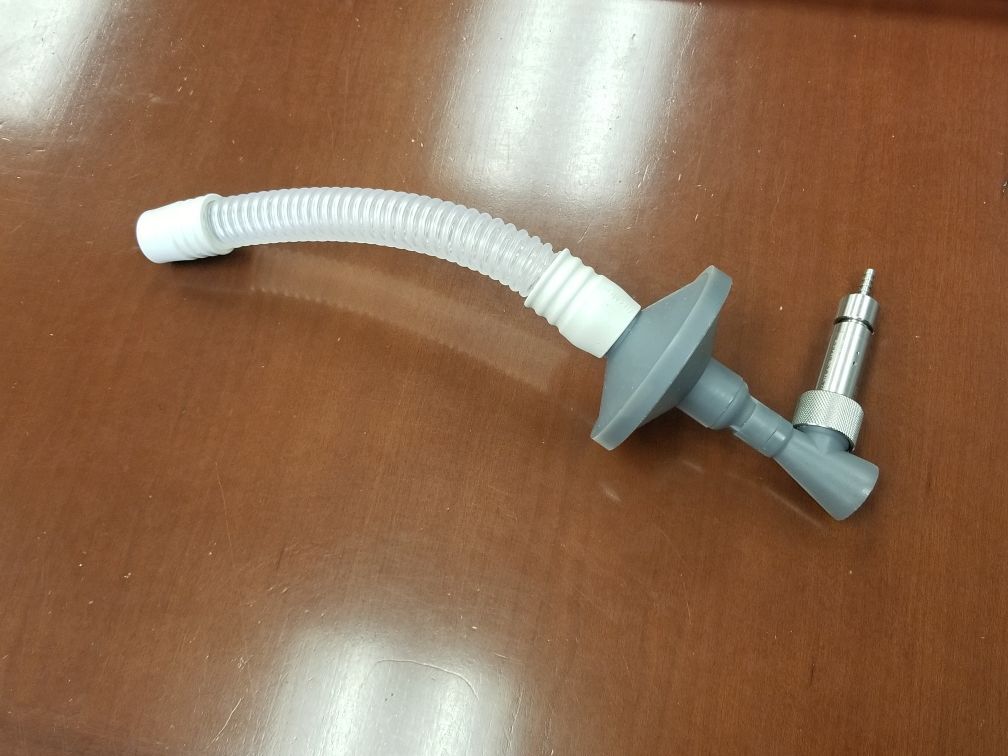 A Boise company invented the Venspirator from regulator technology used for pouring beer from a tap.

From left, Dan Cravens, Jared Barrott, Kim Reeves and Jeff Dalton pose together. Dalton and Reeves are behind a new invention called the Venspirator, and Cravens and Barrott are helping them test and market it on behalf of Idaho State University.

A Boise company invented the Venspirator from regulator technology used for pouring beer from a tap.

Officials with a Boise innovation company and their partners at Idaho State University believe technology developed to pour the perfect beer could soon keep COVID-19 patients off of ventilators.

Legacy US, Inc. has patents pending on a combination ventilator and respirator, called the Venspirator, which company leaders say is portable, cheap to make and requires no power source, making it an ideal fit for developing countries and domestic hospitals overwhelmed by the coronavirus.

The company created the Venspirator by tweaking the patented beer tap regulator it developed.

Legacy’s fully mechanical medical device provides patients supplemental oxygen from a tank through a mask and N95 filter. The regulator allows users to dial in the precise percentage of pure oxygen desired, blending it with natural air to extend the life of the oxygen tank.

ISU’s College of Pharmacy will research the Venspirator, and Bengal Solutions Consulting is tasked with marketing, market research and economic impact studies on the product in support of grant applications.

“There’s a lot of science in pouring a good beer,” said Legacy CEO Kim Reeves, “but if you asked us a few months ago if we would be making a medical device we would have laughed at you.”

The Venspirator, which runs on pressure and provides natural breathing assistance, avoids causing lung damage often associated with ventilators. Reeves said ventilators, by contrast, are known to “take over breathing and force a rhythm.”

Legacy relocated to Treasure Valley from California’s Silicon Valley in December. In addition to making beer tap equipment, Legacy has been installing its patented refrigerated cup holders in major U.S. baseball stadiums for Molson Coors. Legacy has also spun off into technology used for humidity control and carbon dioxide dispersion in indoor farming.

Legacy chose to partner with ISU because the local university holds the state’s health science mission.

“It came about from guys who were not even involved in the medical world but involved in other aspects of technology and manufacturing and said, ‘How can we make what we’re already doing applicable to this medical crisis?’” said Jared Barrott, assistant professor of biomedical and pharmaceutical sciences at ISU, who will spearhead the product research.

Legacy President Jeff Dalton explained the invention traces back to March, when an employee involved in research and development, Jordan Clifford, volunteered the company to make ventilator parts on its 3D printer to help address a national shortage of the medical machines. The company never received any requests for parts. In the interim, however, Dalton and Clifford realized they could devise their own solution by modifying their pressure regulators.

Dalton and his company pressed forward with the project despite having no budget set aside for it.

“This may prevent you from needing a ventilator. ... Once we knew we had a solution, we were like, ‘Shoot, we have a solution. We have to do this,’” Dalton said.

They’re in the process of applying for grants through the National Science Foundation and the National Institute of Health. They plan to apply for a U.S. Department of Defense grant — Reeves explained the devices could filter out smoke and hazardous chemicals to help soldiers, or just give troops an oxygen boost to enhance performance.

They’re also planning to obtain patents in several foreign countries and are partnering on further product research with universities and scientists in Germany, Brazil and China.

Human testing at ISU could start within the next couple of months, Barrott said. He said tests will be conducted with healthy patients to quantify how oxygen circulation and ease of breathing is enhanced.

“It has a worldwide application getting around the need for electrical plugging in,” Barrott said.

Dan Cravens, director of Bengal Solutions, said his staff will attend trade shows and interact with health care decision-makers to identify the needs the product can fill and raise awareness about it. Cravens said his staff will also study successful models used in the past for introducing new technology into the medical equipment field.

“I think there’s a lot of different directions this could go just beyond COVID-19,” Cravens said.

Dalton said the estimated cost of buying a new medical-grade 3D printer and enough resin to create 100 Venspirators is $15,000, and he estimates he’ll eventually be able to get the cost of making a unit down to about $5. By comparison, hospital’s pay about $70,000 for a ventilator.

Dalton said it will also be easy to email designs to ISU, enabling the university to print its own Venspirator parts.

Dalton emphasized that Legacy wasn’t the first company to put beer tap technology to use in the medical field. He explained the FOB, which was invented to recognize when kegs run dry and shut off flow to keep air from entering beer lines, has been converted for use as an artificial heart valve.

“A lot of innovation comes from beer because beer is fluid dynamics and physics,” Dalton said.