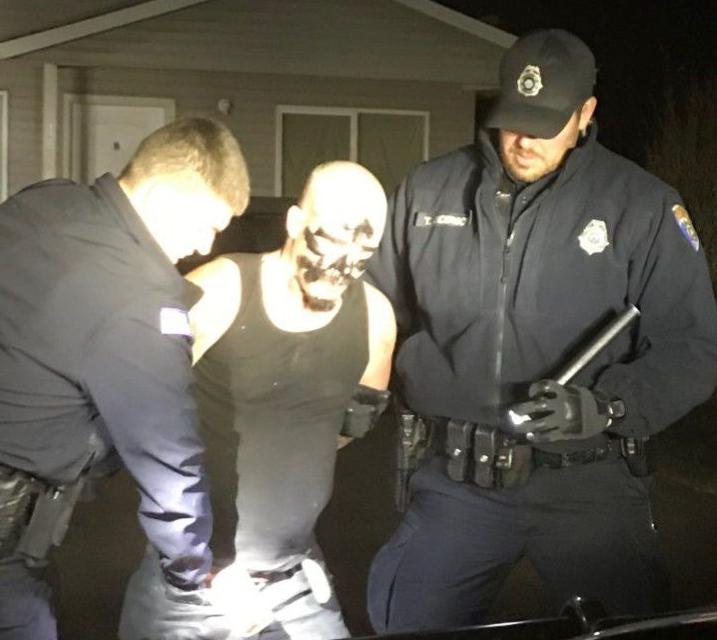 Steven Skylar Drain, 29, of Pocatello, with black paint on his face during his arrest by Pocatello police on Oct. 13 after he allegedly stabbed a local mother several times. 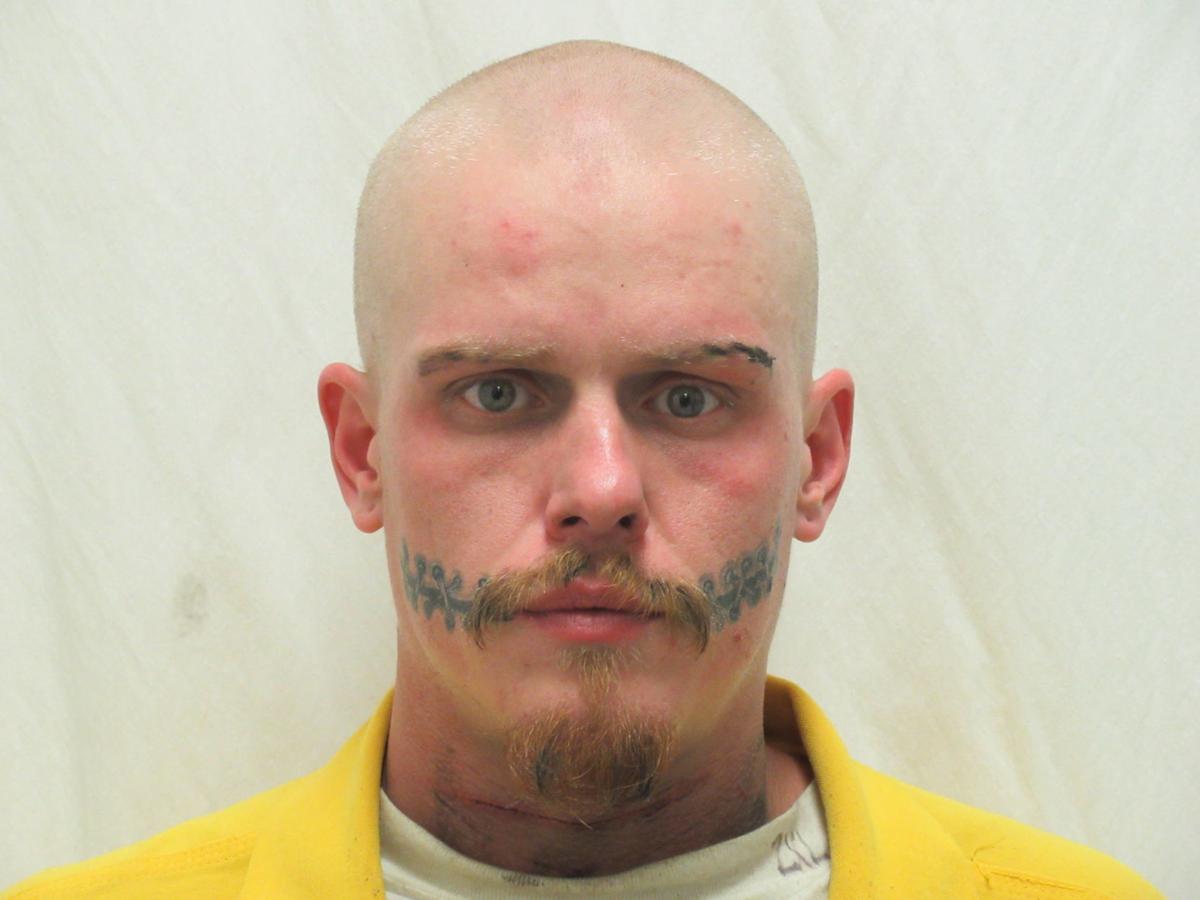 As Pocatello police were entrenched in a city-wide manhunt for a suspect who had reportedly stabbed a woman several times, the alleged victim was being airlifted to a Salt Lake City hospital with the blade of the knife lodged in her back, according to police records.

The mother of three spent several days at the University of Utah Hospital in critical condition before she was stabilized.

When Pocatello police arrested the alleged stabber, Steven Skylar Drain, 29, of Pocatello, about seven hours after the incident, he had shaved off all his hair and covered his face in black paint, police said.

Authorities are not releasing the name of the woman who is still at University of Utah Hospital receiving treatment. But she is expected to survive, according to several posts from the woman’s family members on an online fundraiser they created on Facebook to help the woman pay her medical bills resulting from the stabbing. In addition to recovering from several stab wounds to her head and neck area, the woman suffered a broken jaw and some paralysis on her left side from nerve damage resulting from a stab wound to her back, according to the online fundraiser Facebook page.

The fundraiser is accessible by visiting the following case-sensitive link: bit.ly/31gudyg. As of Saturday afternoon, the fundraiser had raised nearly $4,500 of its $5,000 goal.

Drain, who appeared for his arraignment hearing via video conference from the Bannock County Jail on Tuesday, has been charged with one felony count of aggravated battery with a deadly weapon and a felony enhancement charge for using a weapon during the commission of a felony crime.

Police first learned of the stabbing at 8:34 p.m. Oct. 12 when a resident of an apartment house on the 500 block of South Eighth Avenue in Pocatello dialed 911 to report that a woman had been attacked at the house, police said. The resident who dialed 911 did not speak English as a first language but was able to tell police that the stabbing victim stumbled from the rear of the apartment house to the steps near the caller’s apartment pleading for assistance, police said.

When Pocatello police arrived, they observed the stabbing victim lying in a pool of blood on the outside steps leading up to the apartment house, police said. Her breathing was labored, she was unresponsive and was bleeding profusely from the head, police said.

While rendering first aid to the woman who had been stabbed, police said they observed that the blade of the knife used in the attack was still lodged in her back. The blade was missing its handle but police later found the handle nearby.

The woman was initially transported via Pocatello Fire Department ambulance to Portneuf Medical Center in Pocatello before being airlifted by emergency helicopter from PMC to the University of Utah Hospital in Salt Lake City.

Before the woman was airlifted, Pocatello police responded to PMC to interview the woman’s husband, who had arrived at the hospital to be there for his wife, police said.

The woman’s husband told police that he and his wife had been having some marital issues and that she had moved out of their home into her own apartment on South Eighth Avenue about four weeks prior to the stabbing, police said.

Drain also goes by that name and the Facebook page proved to be a key piece of evidence leading police to identify him as a suspect in the stabbing.

The husband showed police the message thread and Facebook profile page. The profile pictures on the page depicted Drain, who police were able to positively identify based on the tattoos of sewing marks extending from the corners of Drain’s mouth, police said.

While the woman was being treated at PMC, police began trying to piece together what had led up to the stabbing. Upon entering the woman’s apartment, Pocatello police officers found several unopened beer cans and observed that the place had been ransacked, with clothing, ripped apart books and other items in disarray scattered throughout the apartment, police said.

Police interviewed other residents of the apartment house who said they observed Drain, who had long blond hair at the time, at the woman’s apartment earlier on the evening of Oct. 12. The residents identified Drain based on his unique face tattoos.

Several neighbors also said they heard a man and woman, who they believed to be Drain and the woman who was stabbed, arguing later on the night of Oct. 12, according to police.

After interviewing other residents of the apartment house and searching the woman’s apartment, Pocatello police suspected Drain was the individual who had stabbed the woman multiple times and they issued a press release on the night of Oct. 12 alerting the public that he was a “person of interest” in the case.

Police said they received several tips from Pocatello residents about Drain’s whereabouts after issuing the press release. That information led Pocatello police to the home of one of Drain’s relatives in the 1500 block of Zener Street in northwest Pocatello around 1:15 a.m. Oct. 13.

Pocatello police said that Drain barricaded himself in a bathroom at the Zener Street residence when they arrived and after more than two hours of discussions with officers he still refused to surrender. Pocatello police officers then breached the bathroom’s door and confronted Drain, authorities said.

When Drain still refused to surrender he was Tased by police officers and taken into custody without further incident, police said. When officers arrested Drain, they noticed he had shaved off all of his hair and most of his face was covered in black house paint, police said.

After he was arrested, Drain was transported to Pocatello police headquarters for questioning, police said. During the subsequent interview with police, Drain said that he and the woman he allegedly stabbed had been involved in a romantic relationship several years prior. Drain told police he ran into the woman at a supermarket a few months ago and their relationship was rekindled, police said.

After he got off work around 5:15 p.m. Oct. 12, Drain drove by the woman’s husband’s residence and saw that the woman’s car and the husband’s pickup truck were parked in front of the home, Drain told police.

This upset Drain, so he yelled at the residence from the street that he was ending the relationship before going back to the woman’s apartment on South Eighth Avenue to gather his belongings, police said.

The woman’s husband later told police that his wife was with him and their three children at his Pocatello home on the afternoon and early evening of Oct. 12 watching movies.

The woman and Drain exited the apartment house and began arguing on the steps leading into the house, police said. The verbal argument escalated into a physical altercation that resulted in Drain and the woman falling down the steps and at one point Drain slapped and kicked the woman, police said.

Drain then grabbed a steak knife from the kitchen of the woman’s apartment and stabbed her multiple times, police said.

After stabbing the woman, Drain fled the apartment house on foot and headed to his relative’s Zener Street residence, police said.

When police asked Drain about his shaved head and paint-covered face he told them the woman he allegedly stabbed liked his hair the most about him and that seeing his long hair in the mirror following the stabbing upset him.

So while at the Zener Street residence Drain cut off his hair and then covered his face in black paint.

After being interviewed by police, Drain was transported to PMC where hospital staff determined he had fractured his wrist, police said. Though Drain claimed he likely hurt his wrist when he fell down the apartment house’s exterior steps during his altercation with the woman, hospital staff said the injury was consistent with the motion used to throw a punch or stab someone, police said.

After he was treated for his fractured wrist, Drain was booked into Bannock County Jail.

A hearing to determine if prosecutors have enough evidence to take Drain’s case to trial had been scheduled for Oct. 28, but has since been cancelled and no new hearing date has yet been set.

If convicted of the charges against him, Drain faces up to 30 years in prison and up to $50,000 in fines.