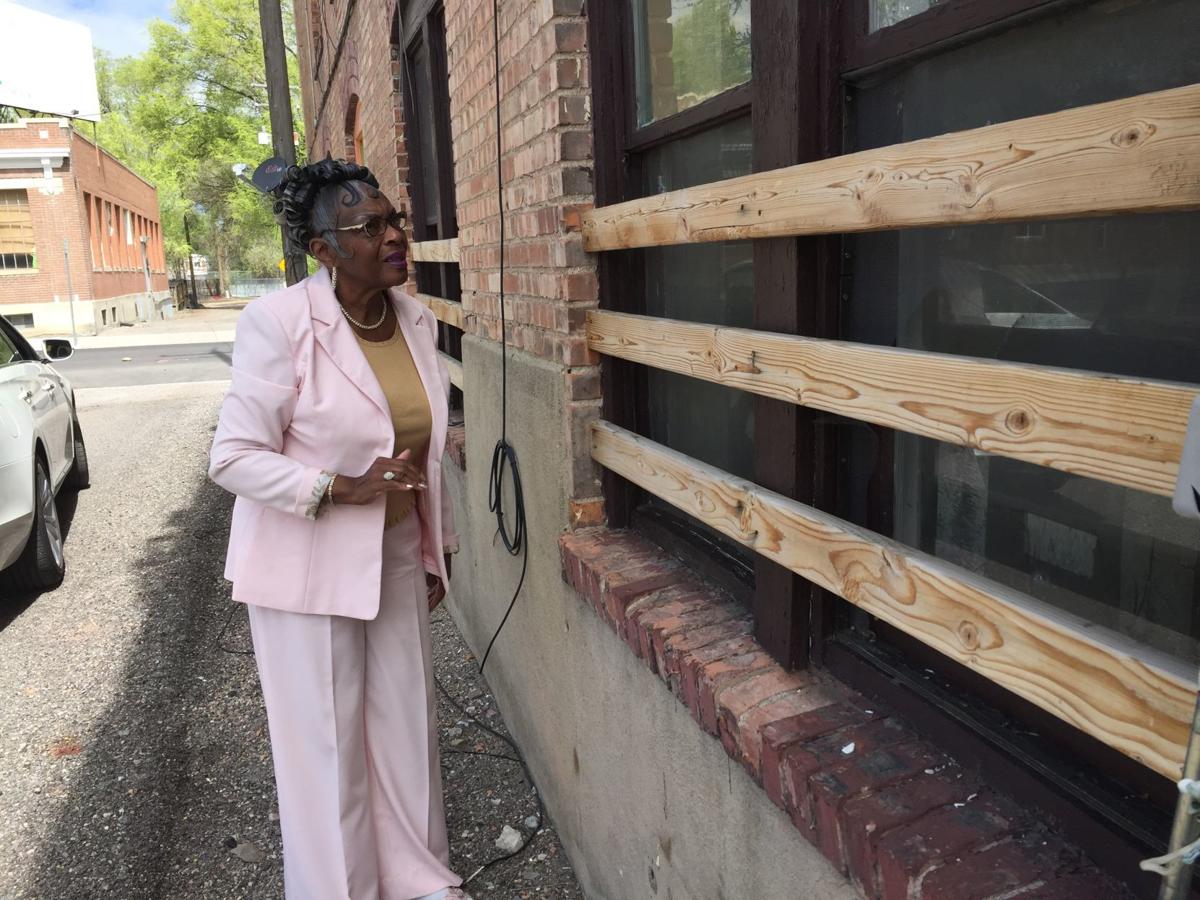 Pastor Jacqualine “Big Momma” Thomas checks on homeless people who are living as squatters in a vacant Old Town Pocatello apartment building. Thomas was once homeless herself and is working to build a local supportive housing facility for the homeless. 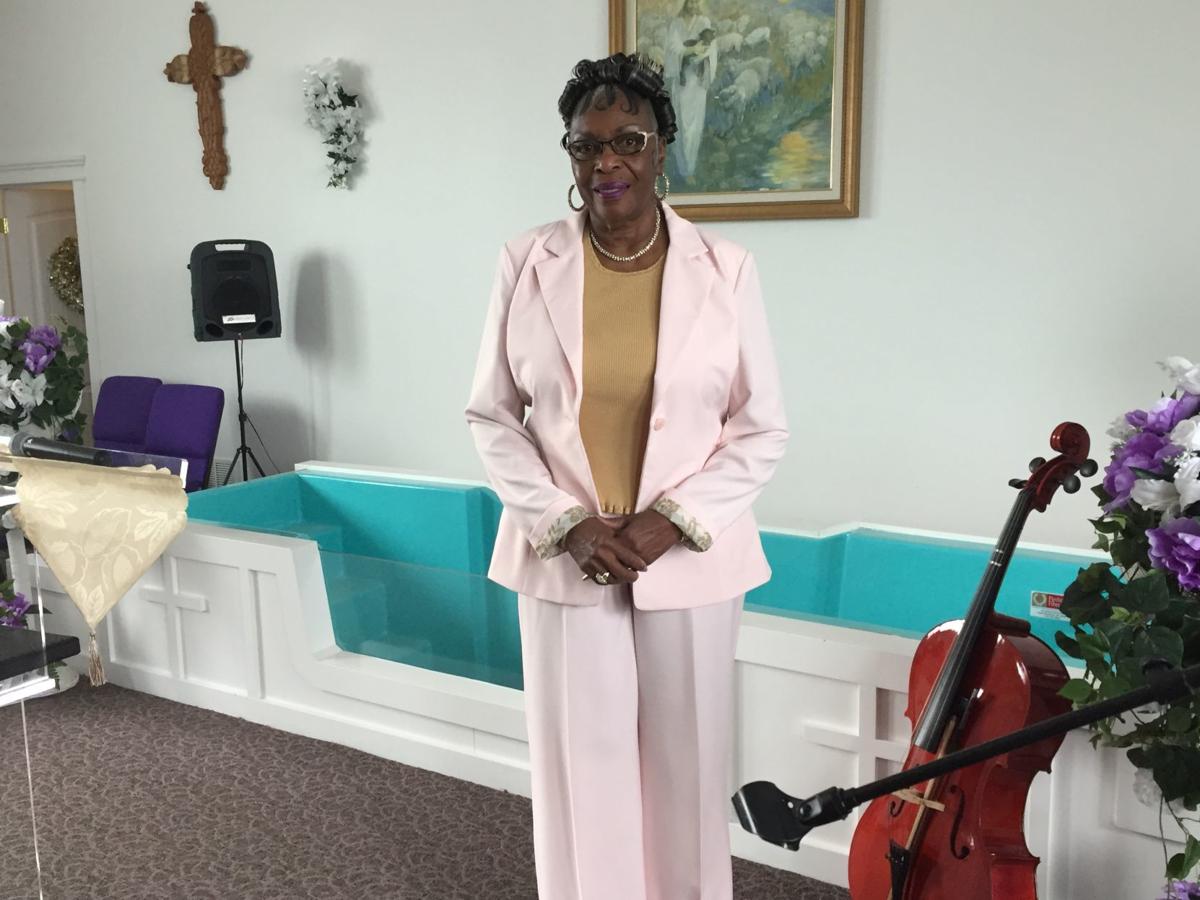 Pastor Jacqualine “Big Momma” Thomas checks on homeless people who are living as squatters in a vacant Old Town Pocatello apartment building. Thomas was once homeless herself and is working to build a local supportive housing facility for the homeless.

POCATELLO — Jacqualine “Big Momma” Thomas informed the security guard at a Los Angeles area hospital she had no other place to go and asked him to check on her car throughout the night.

The ensuing hours were the coldest, longest and loneliest of her life. Thomas sat in a green Ford Taurus, parked near an emergency room entrance, pondering why God had abandoned her and planning her suicide.

She reached rock bottom on the eve of Thanksgiving nearly 18 years ago. Today, she’s a civic leader in Southeast Idaho, on a personal quest inspired by that horrific night to strengthen the local safety net.

Her vision is to build a 34-unit supportive housing facility where Pocatello residents will acquire the tools to lift themselves out of poverty, to be called Big Momma’s House.

“I don’t want to see another person ever decide because things are the way they are they need to consider taking their life,” Thomas said. “You never know what God has planned for you.”

Since moving to Pocatello in 2005 — following her son, Bryant David Thomas, who worked as wide receivers coach for the Idaho State University football team — the 73-year-old has founded her own church, the Praise Temple of God. She’s also established herself as a matriarch in her new community, where even respected civic leaders call her Big Momma.

Facility designs for Big Momma’s House are already drawn, and fundraising has exceeded expectations. Zoning meetings, however, have presented a stumbling block. The City Council has twice rejected her requests for a zoning variance, based largely on concerns from surrounding homeowners.

In March of 2017, the City Council denied her request to locate Big Momma’s House on East Sublette Street. The council had concerns about her business plan, and the Bonneville Neighborhood Association fought the application.

Thomas later returned with another proposal — building a $1.5 million facility in the 1200 block of Pershing Avenue. Again, neighbors packed public meetings to air concerns about traffic and property values, and Thomas was denied.

Thomas and her nonprofit organization are now eyeing yet another piece of property in an undisclosed residential area, preparing to come forward with a third incarnation of the project. Thomas believes supportive housing functions best when it’s located on a residential street.

“I know how I felt being homeless. I needed love,” Thomas said. “You want to make them feel they’re in a loving, caring neighborhood.”

Though finding a good location for Big Momma’s House has been challenging, statistics show there’s a strong need in the area for more resources to help those who are homeless or struggling to get by.

The Idaho Housing and Finance Association’s recent “2018 State of Homelessness in Idaho” report estimated Southeast Idaho had 722 people who were homeless at some point throughout the year, up by 28 from 2017. The region’s total population is 167,000.

Of the state’s seven regions, only the Treasure Valley area had a higher per-capita homelessness rate. The report estimated more than 5,500 people experienced homelessness statewide during the year.

“We’re certainly at a point in time where there’s a higher rate of people who are homeless than in recent years past,” said Brady Ellis, vice president of housing support programs with Idaho Housing and Finance Association.

Ellis explained the report is based on client data that about 70 state service providers who work with the homeless enter into a web-based platform, called the Homeless Management Information System.

Ellis said the report’s estimates are conservative, as many homeless students are missed, and not all Idaho entities that aid the homeless report their client’s data.

The United Way publishes an annual report evaluating households that earn income above the federal poverty level but are still unable to afford basic household necessities, such as housing, food, transportation and child care. The organization’s 2018 report concluded 44 percent of residents of the seven Southeast Idaho counties are Asset Limited, Income Constrained, Employed.

“A lot of those families are one emergency away from they can’t make their (housing) payment,” Otero said.

She’s concerned most of the new housing under construction in the region isn’t affordable by ALICE households. She believes new tax incentives and creative solutions will be needed to address the problem. In Ada County, for example, she said builders have been refurbishing shipping containers into affordable housing.

“Are there other options a little different than what we’ve thought about before?” she asked.

Surviving on the streets

The slightest trace of mold is enough to make Pastor Thomas gravely ill. It’s a lingering effect of when the home she once owned in Carson, California, flooded, and black mold grew everywhere.

Her insurance didn’t cover mold, and the local health department condemned her home. Her clothes, furniture and other possessions were also tainted and had to be thrown away.

That flood triggered a six-year period of homelessness for Thomas.

“I remember I was so hungry one day, I stopped at McDonald’s and asked the lady just to let me have something to eat, and I promised I’d bring money back. She started chuckling at me,” Thomas said. “I stayed in my car at times. I sofa surfed from family to family.”

Because she felt ashamed and depressed, she distanced herself from her own family.

Even when she was homeless, Thomas prided herself on her appearance — known for her colorful suits, ornate hats and perfectly manicured hairdo with intricate spirals and designs.

Her morning routine while on the streets entailed getting up early and heading to the restroom at a hospital or fast food restaurant to brush her teeth and tidy up. On nights when she slept in her car, she’d park under a light at a business open 24 hours and let the security guard know she was there.

Parked outside of Torrance Memorial Medical Center nearly two decades ago, Thomas saw no way out of her predicament but to drive her Ford Taurus off of a cliff.

Before she made good on her plan, however, she met a stranger she now describes as her “angel.” He somehow picked up on her extreme distress, offered her some comforting words and called the police.

Shortly thereafter, her stepfather helped her get into an apartment. Friends gave her a bed, a sofa and a dining room set. After living two years in the apartment, she moved to Pocatello to be closer to her son.

“He was the main one who helped me get back on my feet,” Thomas said.

Furthermore, her home in California sold to a contractor who planned to tear the interior down to the stud and rebuild. Funds from selling the California home covered about half the cost of purchasing a home in Pocatello, where she still lives.

It took her more than a year to unpack, fearing in the back of her mind that it was too good to be true and could be lost at any moment. Having previously served as a minister’s assistant in California under her step-father, the late Rev. James Wright, she decided to start her own church.

She’s made a point to open her home frequently to individuals and families with nowhere else to go.

“I thought it was finally time to facilitate where they could be housed away from my home,” Thomas said, describing the origin of her plan to build Big Momma’s House.

Her executive assistant, Dina Bowden, said Big Momma’s House will require tenants to be sober for at least 30 days and 12 months free of incarceration. No weapons, alcohol or drugs will be allowed on site, and a staff member will provide constant supervision.

“We’re trying at this point to educate the community on truth and facts on who the homeless truly are, and also what we are going to do,” Bowden said.

Residents won’t be charged for their housing until they find employment, when they’ll be asked to contribute 30 percent of their income. They’ll receive counseling, life skills courses, budgeting training, spiritual and general wellness training and a host of other supportive services. A case manager will also be assigned to create individualized plans and help residents access other resources.

Thomas is grateful to the people who encourage her daily to persevere with her project.

“It’s a commandment from God that we love one another,” Thomas said.

Editor’s note: This is the final installment in a three-part series on homelessness in Southeast Idaho. Today's story focuses on the personal history of Pastor Jacqualine “Big Momma” Thomas, who is working to build supportive housing for homeless people in the Pocatello area. The series began May 26 with a story about homelessness among local veterans. The second story, which ran June 2, covered local families who are struggling due to the rising cost of housing.