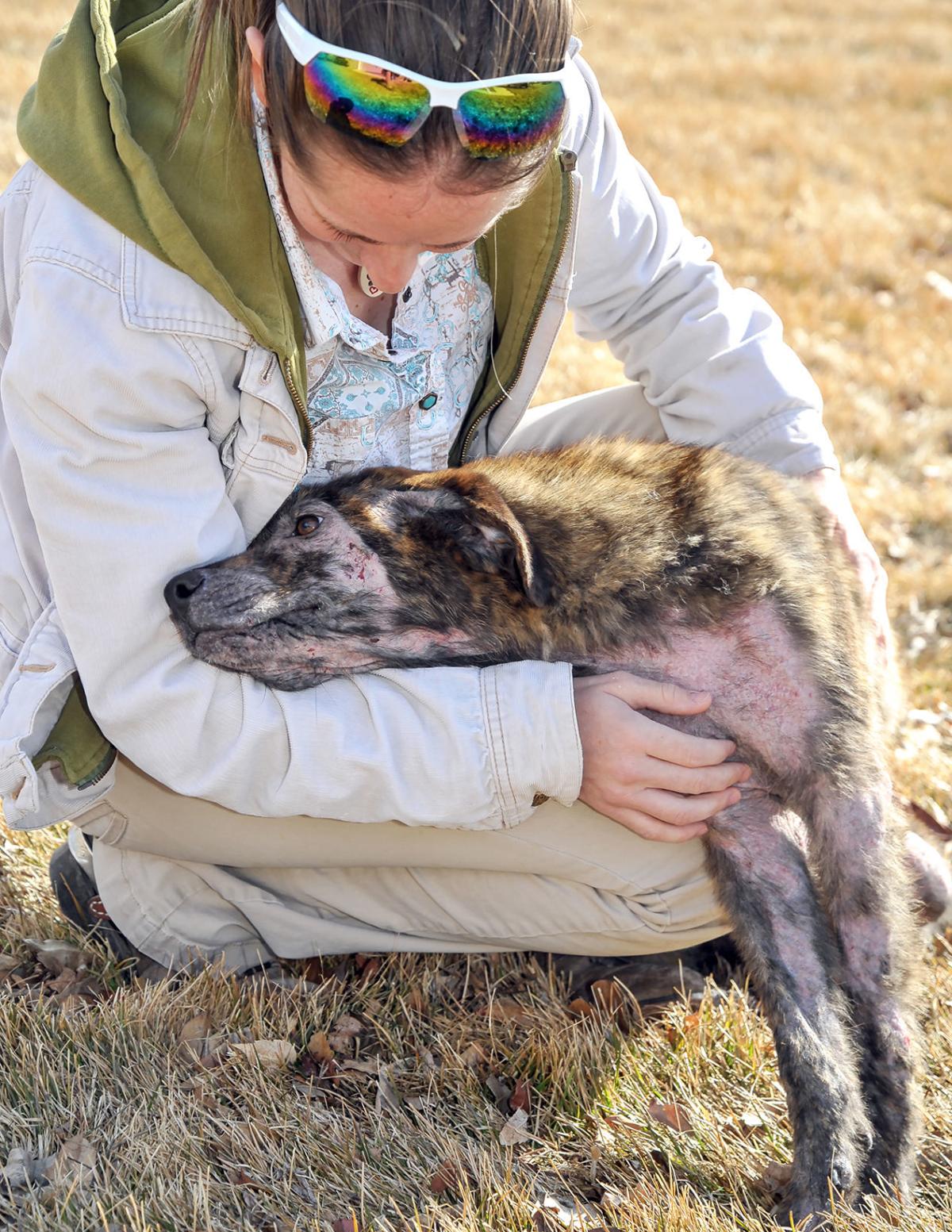 Danniell Dustin, an animal foster care worker, holds Harvey, a rescued dog who ended up with the Bannock Humane Society after being found abandoned along a local road. 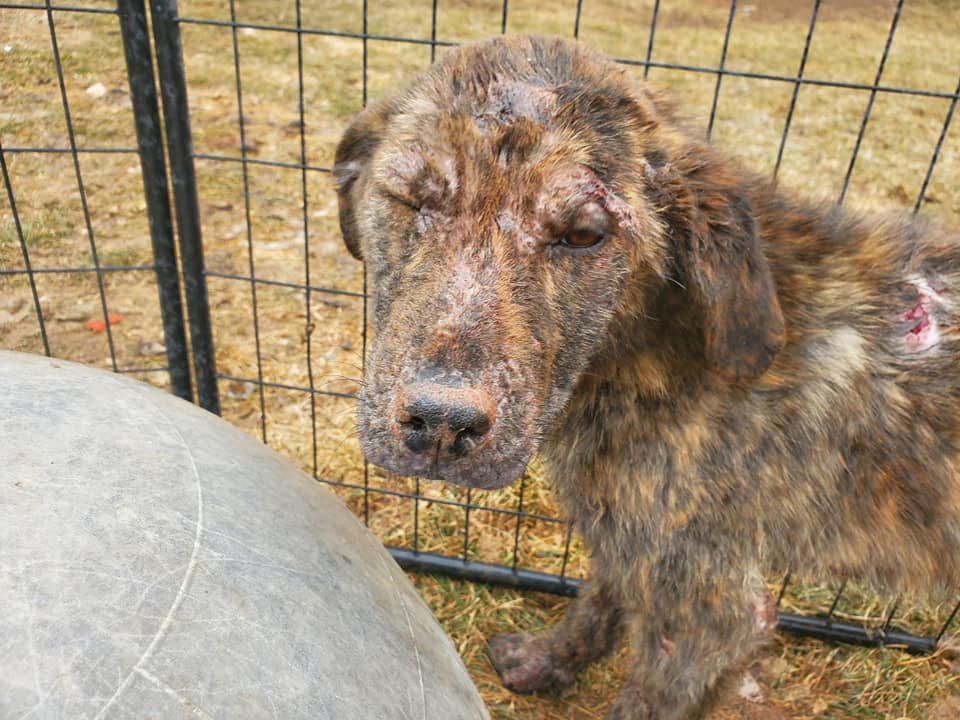 Harvey is covered in mange about one week after he was rescued from the side of a local road in early February. Bannock Humane Society officials said the dog wouldn’t have survived another 24 hours left out in the elements.

Danniell Dustin, an animal foster care worker, holds Harvey, a rescued dog who ended up with the Bannock Humane Society after being found abandoned along a local road.

Harvey is covered in mange about one week after he was rescued from the side of a local road in early February. Bannock Humane Society officials said the dog wouldn’t have survived another 24 hours left out in the elements.

POCATELLO — When Harvey, a mangy 7-month-old shepherd mix, was surrendered recently to the care of the Bannock Humane Society, the director says he wouldn’t have survived another 24 hours out in the elements.

Bannock Humane Society Director Ronna Martinez said the woman who discovered Harvey at first wondered if the sunken heap of an animal was even alive moments before realizing it was a puppy that was likely loved by someone at some point.

“A woman found Harvey on the corner of Hiline and Ballard roads around the first week of February while parked at the stop sign,” Martinez said. “She noticed something laying off to the side of the road and wasn’t even sure if what she was looking at was alive. Then she saw it move, so she got out to see what it was and Harvey sort of picked his head up and limped over to her with a look that cried out, ‘Somebody please help me.’ She opened her car door and he jumped right in and crumpled onto the backseat.”

For Martinez, Harvey’s story is all too common. A person or family finds an animal from a shelter, a breeder or a neighbor whose cat unexpectedly got pregnant and are soon confronted with how difficult it can be to care for a pet.

Approximately 6.5 million companion animals enter U.S. animal shelters and humane societies nationwide every year, according to the American Society for the Prevention of Cruelty to Animals.

Despite the obvious neglect of Harvey — who contracted both demodectic and sarcoptic mites with secondary infections of his mangy skin, and had significant wounds to the top of his head and torso — Martinez suspects he was loved at some point because of how willing he was to approach his rescuer. Although every move Harvey made was excruciating as his infection-covered skin cracked and bled, all he wanted to do was crawl into the lap of his foster mom, Danniell Dustin, Martinez said.

“Harvey was with people at the beginning of his life and what I really suspect happened is that he contracted this sickness when he was with whomever had him as a puppy,” Martinez said. “What he picked up they probably had no familiarity with, how to control it or what it even was, really. I believe they didn’t know what else to do and just dumped him.”

She added, “When people get an animal and don’t know what it takes to care for them or can’t afford to provide for them that is usually what happens. Luckily, somebody happened to be there at the right time for Harvey because there is no way he would have made it another 24 hours out in the cold.”

At the Bannock Humane Society, Martinez and her staff typically deal with a few dozen animal rescues every year, she said. But over the last year, those numbers have skyrocketed, Martinez said.

“We have had 100-plus animals dropped off in the last year,” Martinez said. “We have been scraping neglected animals off the pavement this year, literally in some cases. One problem is that all of the shelters and fosters in our entire surrounding area are full. It’s so bad that we are getting a ton of calls from other rural communities outside of Bannock County looking to surrender animals.”

Dustin has been nursing Harvey back to health. A Fort Hall resident, Dustin has fostered for the Bannock Humane Society consistently for the last four years. She also runs Dustin’ Time Rescue aimed at providing foster care for livestock and farm animals.

“We take in horses, goats and all sorts of other farm animals,” Dustin said. “Many of those are orphan mustangs that we save after the rest of the herd is shipped off to slaughter. We stabilize them and get them adopted out.”

For several weeks Dustin accompanied Harvey to the veterinarian where he’d receive a shot of cattle ivermectin to kill the mites causing his mange, treated him at home with antibiotics and pain pills and provided him daily baths in a chlorhexidine shampoo to kill the secondary yeast infections from the mange.

“That first week every time he moved his skin would crack and bleed everywhere,” she said. “I had never seen an animal with mange like his before. Demodectic mange is pretty common, you’ll see babies get it from their moms when nursing. But the sarcoptic mange, you don’t normally see in dogs very often.”

In addition to pet owners participating in low-cost spay and neuter programs, Martinez says the humane society could greatly benefit from more people volunteering as foster families to care for abandoned pets until they can find their forever homes.

“One of our biggest needs is people that are in a position and willing to foster animals,” Martinez said. “We do not keep animals in cages in buildings and our animals move pretty well. If you will foster an animal, we have the means to promote them and find them a home.”

The humane society offers spay and neuters in addition to an animal’s first round of shots and first veterinary examination for $85 for any cat or $100 for every dog. There are also $35 spay and neuter certificates available for feral cats to try and help contain their population numbers, Martinez added.

Another way the community can help the Bannock Humane Society is through monetary donations, which people can make in the form of cash or check sent to P.O. Box 332, Pocatello, Idaho 83204, or online at bannockhumanesociety.org.

A recent fundraiser for Harvey had 13 donors and raised $645. Those interested in seeing more of Harvey’s condition before he entered the care of Dustin and the Bannock Humane Society and would like to contribute to their cause in his name can visit tinyurl.com/harveys-fund.

“It’s absolutely heartbreaking to see so many surrendered pets because the thing is there are so many of us out there that are only a phone call away,” Martinez said. “It doesn’t have to get so hard that you just abandon your animal. We should love our pets and treat our animals like an extension of our own families.”