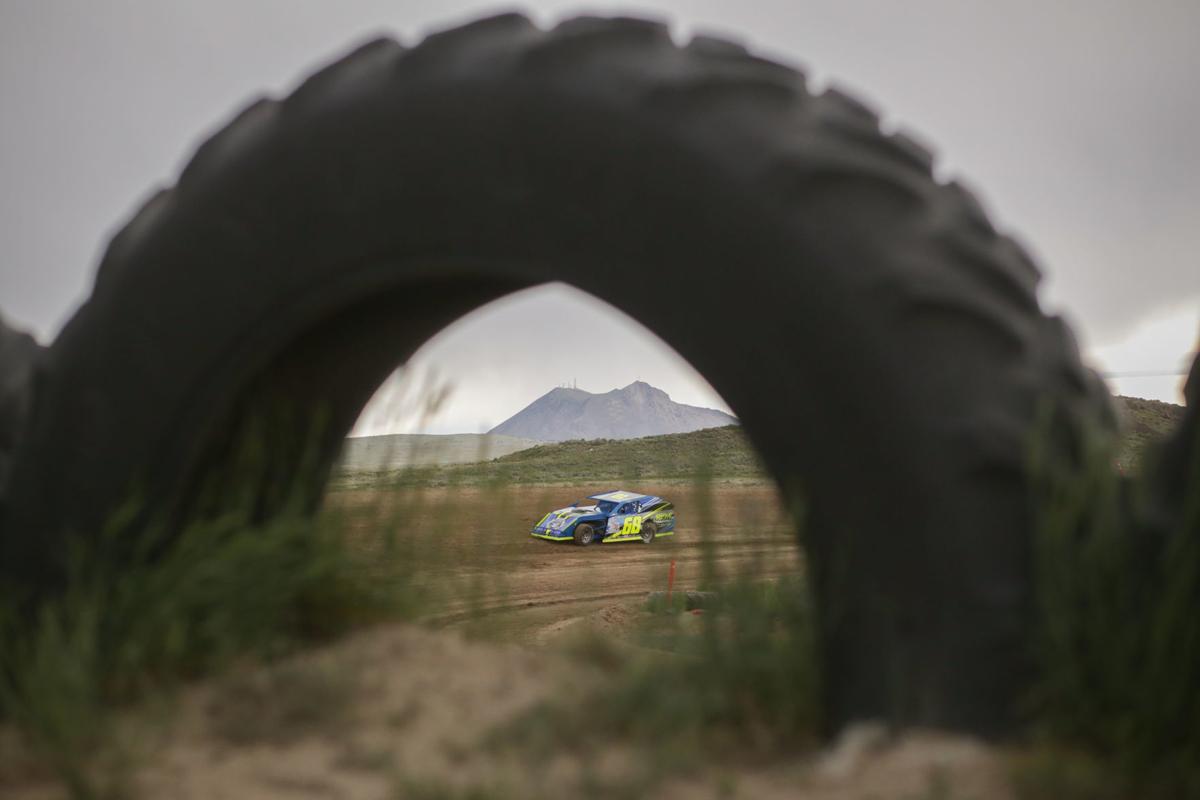 A modified race car runs laps before being called off due to weather at Atomic Motor Raceway in Atomic City on June 8. 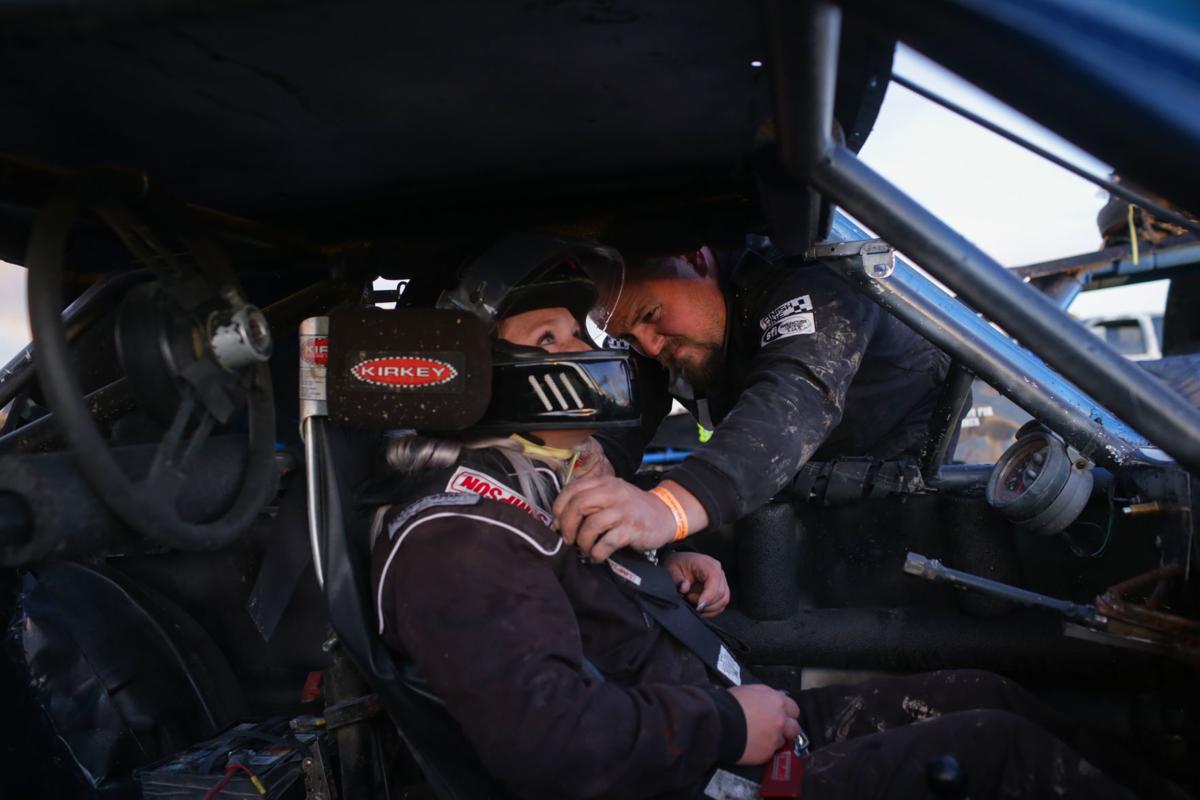 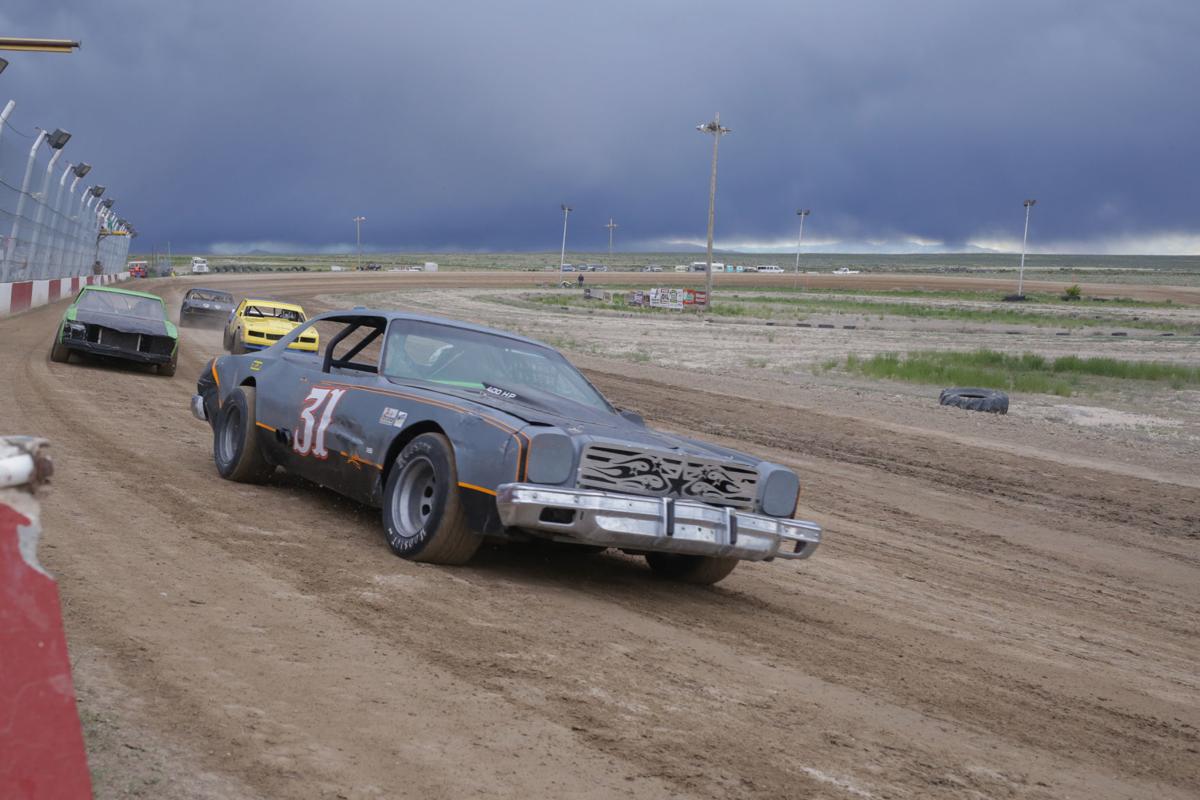 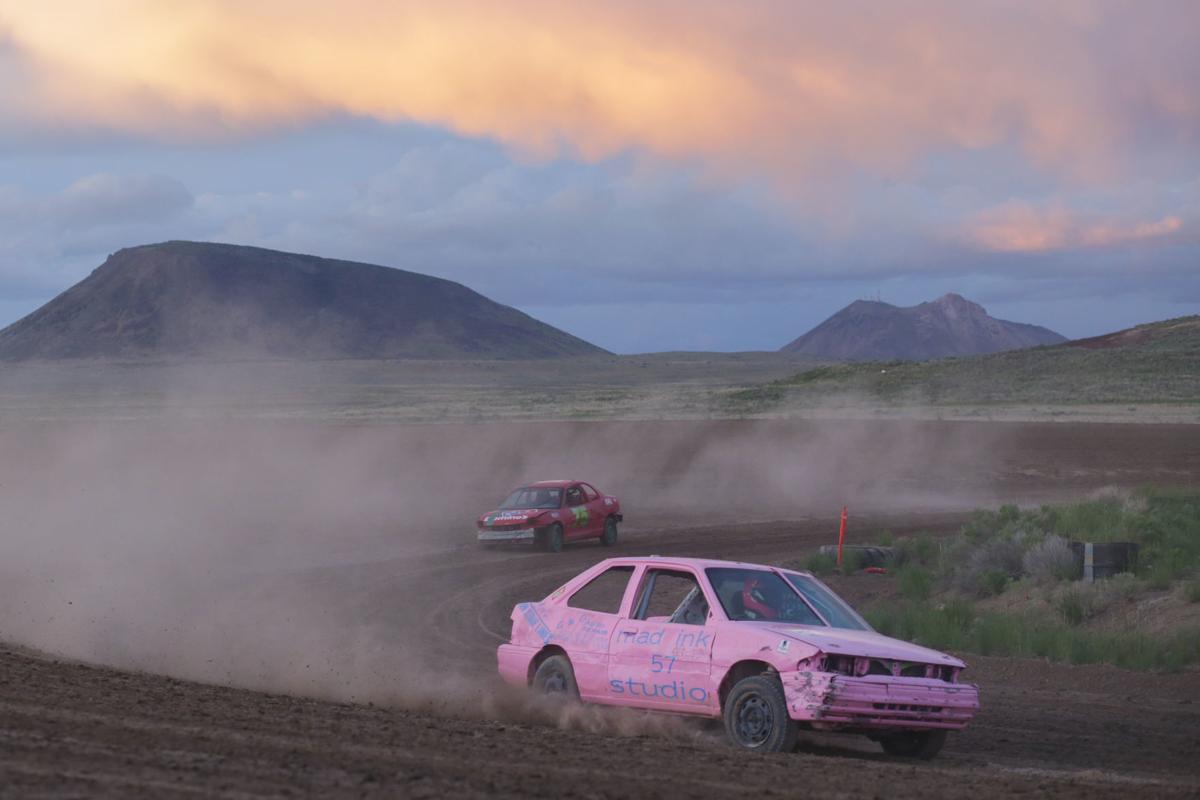 Orinda Newman races in the hornet class at Atomic Motor Raceway in Atomic City on June 8. 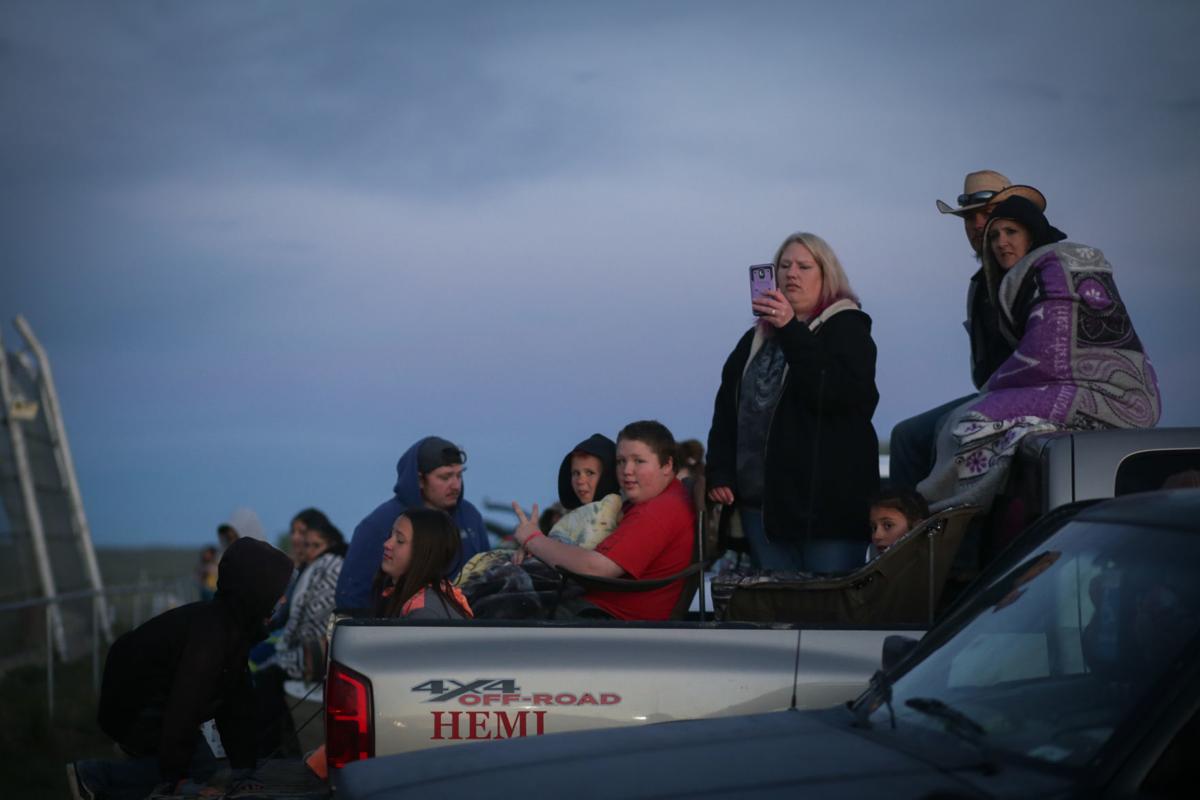 A modified race car runs laps before being called off due to weather at Atomic Motor Raceway in Atomic City on June 8.

Orinda Newman races in the hornet class at Atomic Motor Raceway in Atomic City on June 8.

ATOMIC CITY — Less than half a mile of dirt draws hundreds of people here on summer Saturdays. The small town, 50 miles west of Idaho Falls, is home to Atomic Motor Raceway.

Race fans park along the race track and sit in truck beds. Or they grab a seat in the grandstand, where they have a bird’s-eye view of the track and the expanse of vacant desert beyond it.

They’re here to watch race car drivers — not quite professionals but not amateurs either — rumble and drift around the small racetrack early in Atomic Motor Raceway’s 2019 season.

Most of the people here know each other. Justin Bird, who provides commentary for the races from a watchtower, refers to drivers by their first names; that is, when he’s not advertising race tacos, a blend of hamburger meat, shredded cheese and lettuce in a bag of crushed Doritos.

When someone falls behind in a race, Bird jokes that the driver “forgot which pedal to push.”

Regulars think of the Atomic Motor Raceway as a hidden treasure. It’s well known to racers in the region but not to people outside the racing community.

“There’s people that have lived out here their whole life and don’t know this is here,” Bird said.

O’Haro and Lyle met at the track in 2008. They bought it when the business met hard times about four years ago.

“The track was really great,” O’Haro said. “Then it kind of died down, and it shut down for the year before we bought it. The main reason we bought it is, basically, to keep racing alive.”

Atomic City’s population is 26, according to 2017 census estimates. Race attendees become familiar faces in just a few visits. Nearly every driver or spectator who spoke to the Post Register on Saturday said the Atomic City racing community is a family.

“This has become one huge race family,” O’Haro said. “You know everybody. The people are excited. They love the dirt. It’s just a lot of fun.”

Even when the dirt turned to mud on Saturday, after a surprise sleet and hail storm, the fun continued. An hour delay allowed the track to partially dry (a little moisture is good for the track, Bird said, providing cars’ tires with better grip).

Races are divided into four classes, based on the style of car and modifications to the engine and body. The fastest class is modified cars, which often reach 70 mph on straightaways of the Atomic track but can go much faster on larger tracks. Next is the street class, or stock cars, followed by minis and hornets, which are factory cars.

Drivers come from Utah, Wyoming and Montana to race at Atomic Motor Raceway, one of four tracks in eastern Idaho. Drivers here are a mix of veterans and beginners.

Newman, a hornet class racer, finished in second place on the season last year. After two races this season, she is in second again.

“I’ve been to the race track my entire life,” Newman said. “It just gets in your blood.”

Sit in the Atomic City Bar & Store — also owned by O’Haro and Lyle — on a NASCAR Sunday, and you’ll see the locals’ passion for racing. They call the professional drivers by their first names, as if they were friends on the Atomic City track, and they wince during a crash, understanding the cost of repairs for a professional race car.

Atomic Motor Raceway cars don’t have the same sleek, flashy look as the cars making the infinite left turns at 200 mph on NASCAR tracks. That’s because Atomic drivers aren’t afraid of bumping and grinding with their competitors.

Many Atomic cars resemble something you might find in a junkyard. Open the hood, however, and you’ll see a shiny, pristine engine, indicative of the meticulous care its owner provides.

It’s the engine, after all, that wins races.

Rob Jackson, 45, of Salmon, built his first race car — actually, a Toyota truck — about a decade ago, and he’s been racing ever since.

“I’m a big Toyota nut,” said Jackson, who drives the No. 02 car in the mini class, or the “bubble gum and duct tape class,” as he described it.

“That’s the fifth one I’ve built,” he said. “They’ve all been Toyota pickups.”

On Saturday, Jackson drove his Toyota in the 10-lap mini stock heat, a competitive three-car race that had more than a handful of lead changes. While minis aren’t the fastest class, this race had all of the excitement of a modified race. The three cars went back and forth for the lead, one car going high and sliding past the other on the outside or another trying to sneak by on the inside but getting blocked off.

A race like that keeps Jackson coming back to the track.

“It’s the fun, it’s the excitement,” Jackson said. “And it’s a little bit of (being) in the spotlight.”

While competition on the track can be fierce, no hard feelings are carried into the “pit”, the race car staging area. In the pit, drivers shake greasy hands, help each other tinker with engines and share tools.

“I can walk over and talk to them,” Jackson said, pointing to his fellow drivers. “It’s not a ‘Who are you?’ or ‘What are you doing here?’ Everybody usually smiles. It’s a good time.”

Coltin Jackman, 31, and Brandi Jackman, 28, a married couple from Blackfoot, both drive in the races, Coltin in the modified class and Brandi with the hornets.

The Jackmans’ daughters, ages 10, 7 and 5, attend the races and watch their parents.

“This is what we do as a family,” Coltin Jackman said. “My girls told me if I ever quit racing they were going to be mad at me.”

Atomic Motor Raceway wants to expand this community. While the track hosts loyal fans every two weeks during the summer, drivers, spectators and owners alike want to see new faces.

“We have this great group of people who just want to keep the track going, so they do everything they can to support us and to get people out here,” O’Haro said.

For information and to view racing standings, visit facebook.com/atomicmotorraceway/.