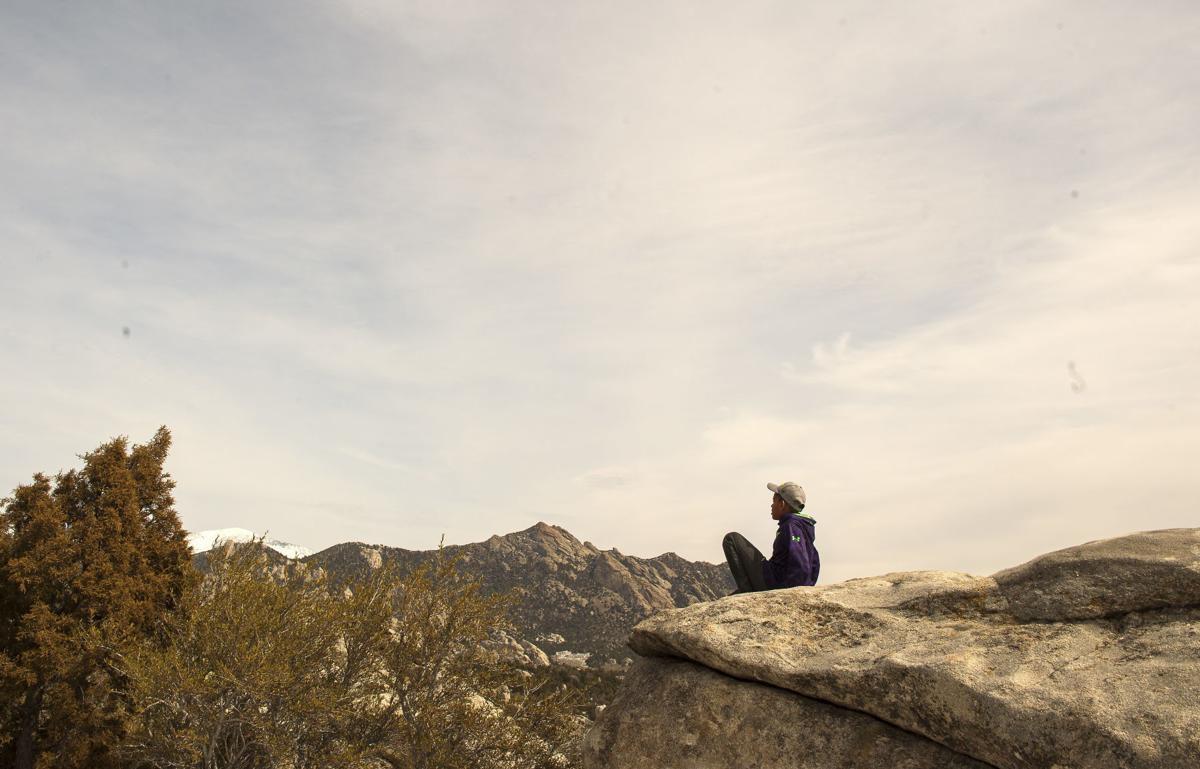 Yonatan Williams, 12, looks out over City of Rocks National Reserve on March 26 near Bath Rock. 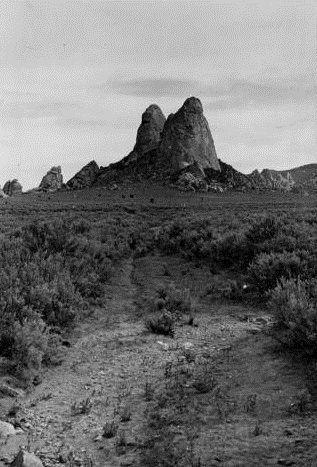 The "Silent City of Rocks" is where the Holladay Stagecoach and the Kenton Freight Road met the California Trail. The trail is seen looking toward the Twin Sisters at City of Rocks National Reserve. Charles Trotter and his brother-in-law Charles Walgamott ran the stage stop near here in the early 1870s. 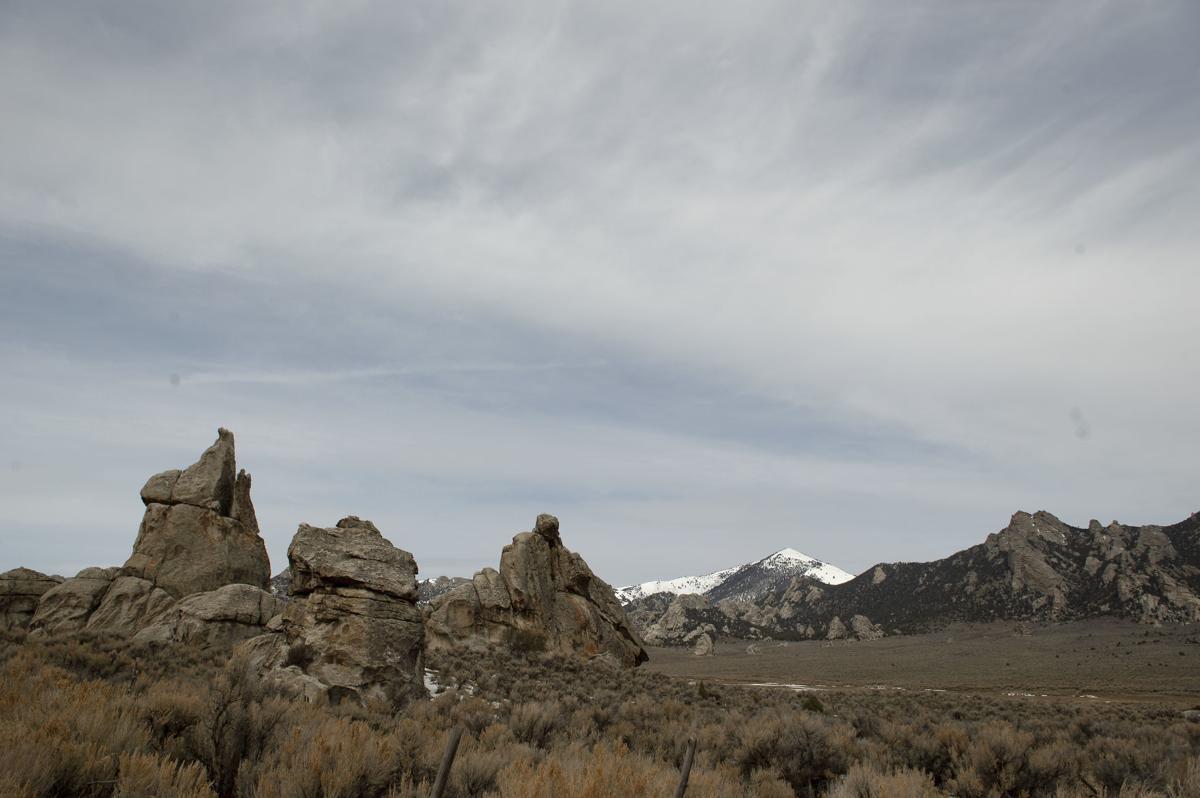 City of Rocks National Reserve near Almo is pictured here on March 26. 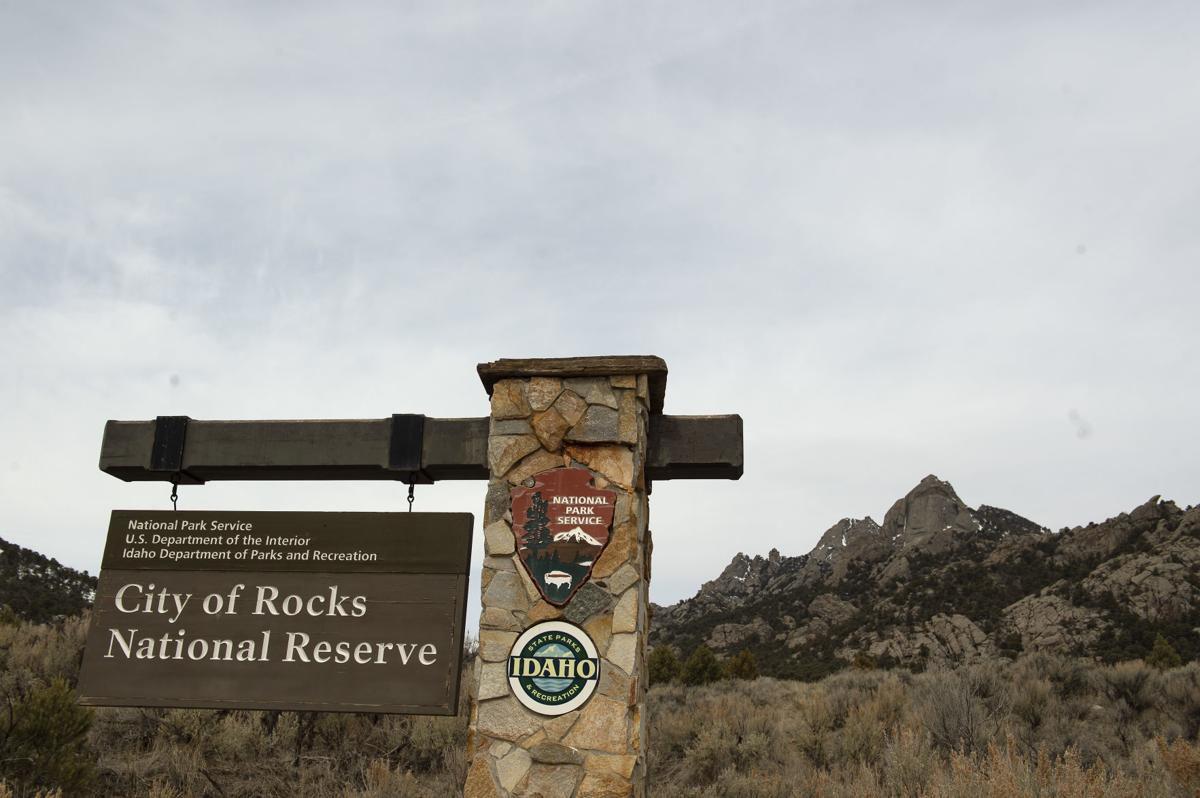 The entrance to City of Rocks National Reserve near Almo is pictured on March 26. 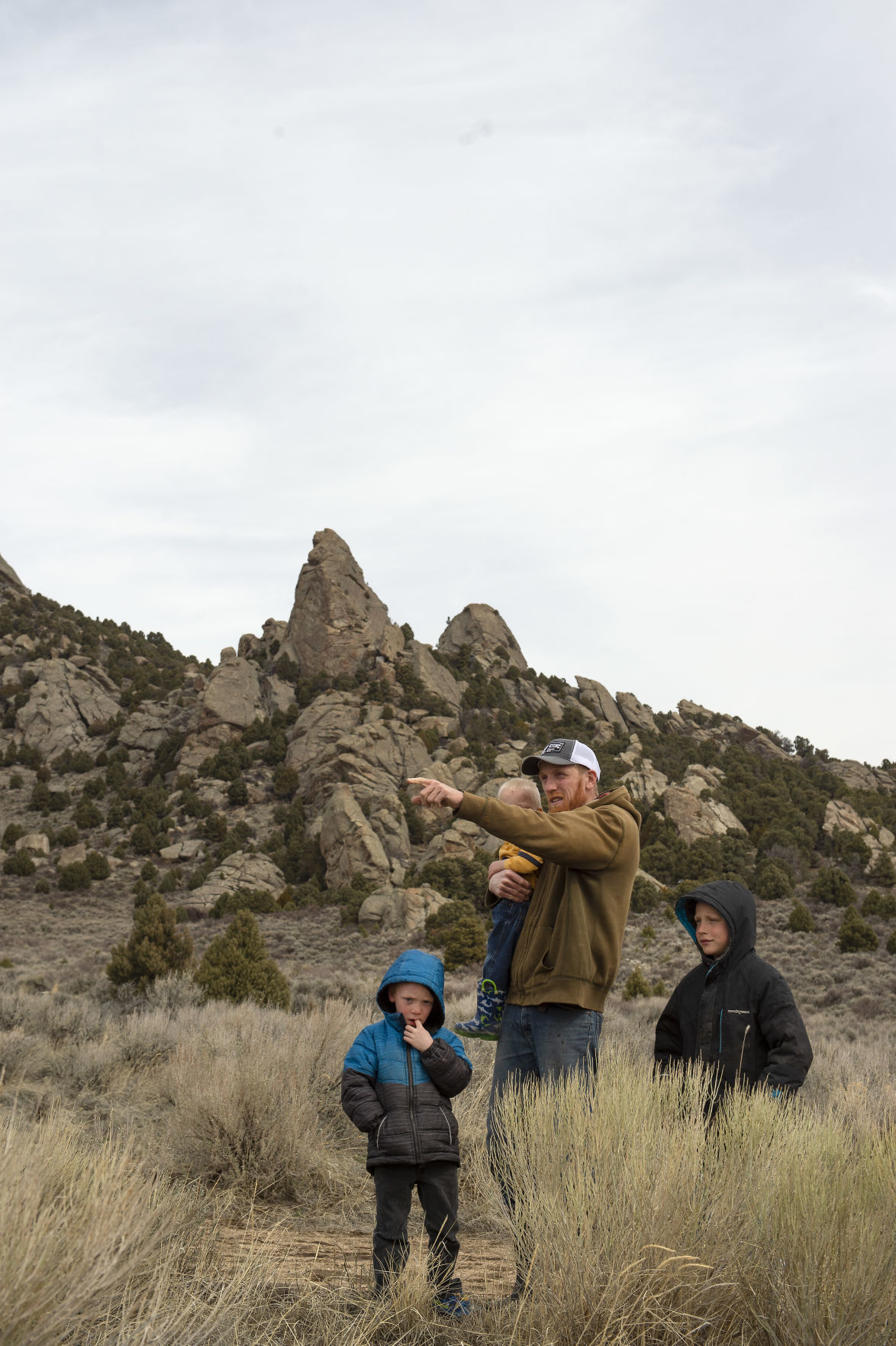 Phillip Christensen and his sons — from left, Eugene, 4, Orson, 2, and Jed, 7 — check out City of Rocks National Reserve near Almo on March 26. 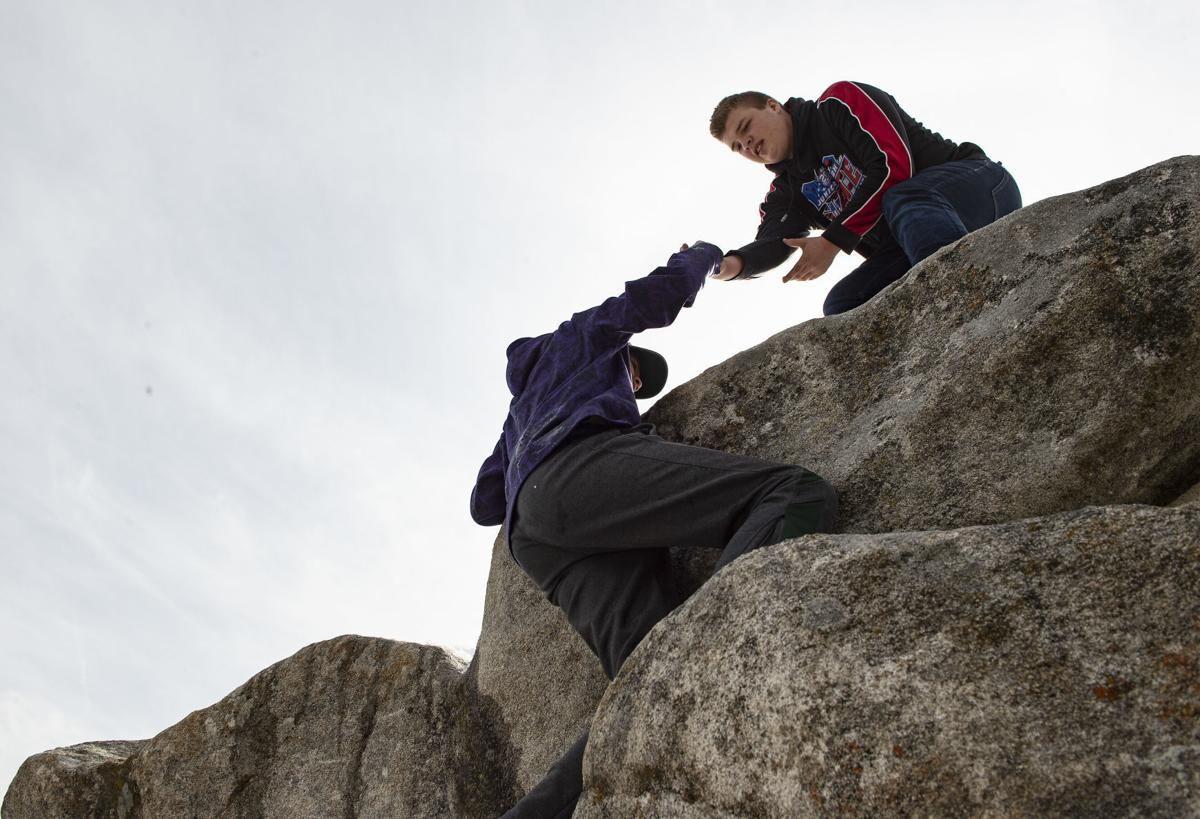 Elijah Willians pulls up his brother Yonatan, 12, while sightseeing March 26 at City of Rocks National Preserve near Almo. 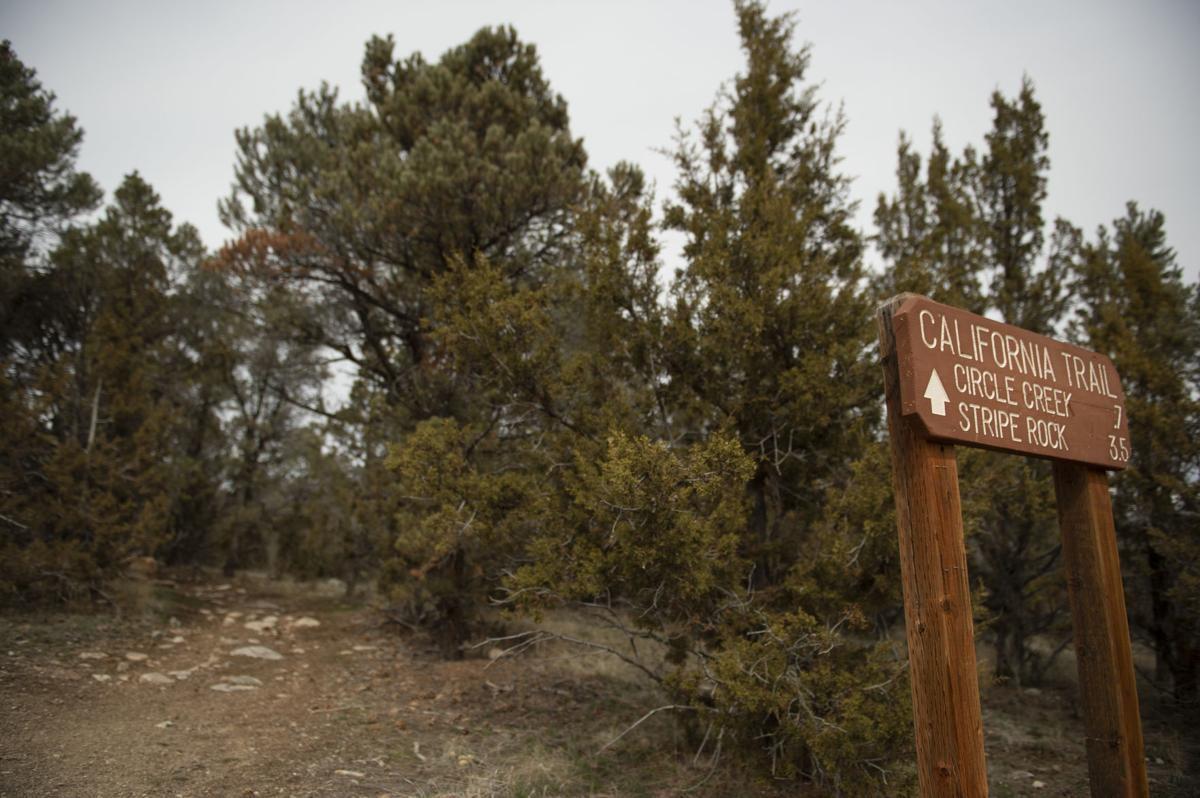 Parts of the California Trail can still be seen at City of Rocks National Reserve near Almo. 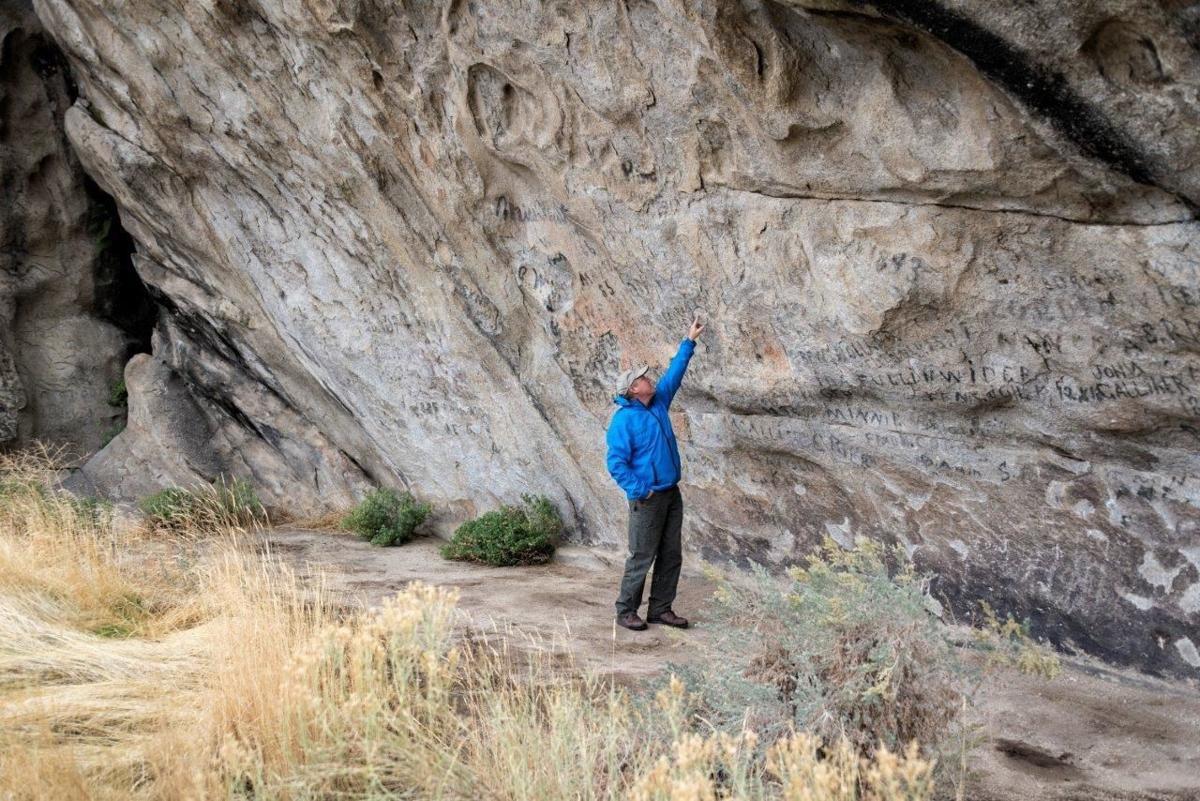 Superintended Wallace Keck points out emigrant names written in axle grease on Camp Rock at City of Rocks National Reserve near Almo in 2017.

"Stagecoach King" Ben Holladay's home station at the City of Rocks near Twin Sisters was operated by Charles Trotter and his brother-in-law Charles Walgamott in the early 1870s.

Yonatan Williams, 12, looks out over City of Rocks National Reserve on March 26 near Bath Rock.

City of Rocks National Reserve near Almo is pictured here on March 26.

The entrance to City of Rocks National Reserve near Almo is pictured on March 26.

Parts of the California Trail can still be seen at City of Rocks National Reserve near Almo.

ALMO — Want to find an adventure without the hustle and bustle of the typical tourist town? Almo and its surrounding recreational areas may provide the seclusion you’re looking for.

The tiny village is often described as a town lost in time. The California Trail, alternate routes of the Old Oregon Trail, and old stagecoach routes are still evident in many locations throughout the area.

Looming above 10,000 feet, Cache Peak is Idaho’s highest peak south of the Snake River. The appearance of the peak and its sister summits ahead of westbound emigrants on the Old Oregon Trail signaled the “Parting of the Ways” near Raft River, where folks decided whether to continue northwest to Oregon or take the “last exit” to the California gold fields.

Those who turned southwest toward California found what they called the “Silent City of Rocks” in Idaho just north of the Utah border. Hundreds of emigrants between 1843 and 1882 wrote their names in axle grease on towering granite boulders and camped in the future park before continuing into Nevada.

Margaret A. Frink, an emigrant on the California Trail, traveled through what she called a “stone village” in July 1850.

“It is a sublime, strange, and wonderful scene — one of nature’s most interesting works,” Frink wrote in her journal.

Nestled in the Albion Mountains just east of the City of Rocks National Reserve, Almo was an early hub of activity on the trail. To this day, the unincorporated community — home to numerous ranching families — remains a hub but for rock climbers, photographers, birders, hunters, campers and cyclists.

The visitor center for the reserve and nearby Castle Rocks State Park is in Almo, open seven days a week from mid-April to mid-October, and Tuesday through Saturday during the winter months.

An estimated 240,000 emigrants passed through the Almo area on their way to California in the 1800s; today, the National Park Service estimates the number of “visits” to the City of Rocks and nearby Castle Rocks State Park at 290,000 annually.

Castle Rocks and “the City” are internationally renowned among climbers, boulderers and sightseers alike. Some 60,000 climbers hit the rocks every year, said Wallace Keck, City of Rocks National Reserve superintendent since 2002.

“The City of Rocks hit the national climbing magazines in the 1980s and the word spread,” Keck said.

More than 600 established climbing routes from 30 to 600 feet high are rated from a relatively easy “5.6” to an extremely difficult “5.14” spread over nearly 16,000 acres. Guidebooks to both the City and Castle Rocks are available at the visitor center, he said.

The National Park Service offers several opportunities to learn how to climb at the City before spending money on climbing equipment.

“For about $40, our rangers in the Climbing Experience program will take you out to an easy route so you can get the feel of the rock to find out if you like it,” Keck said.

In addition, rangers have offered the First Time Climbing program for children several times a year. Children are harnessed so they can climb without danger of falling, then lowered to the ground safely by ropes.

“We want children to come to the City,” Keck said. “In the eight years we’ve been doing the ‘First Time’ program, we’ve never had an accident.”

Guide services are available for those who want to continue the sport.

An avid photographer, Keck splits his time managing both the reserve and the state park, an old ranch obtained by the state in 2003.

“I would never go out to the backcountry without a camera,” he said. “Put me wherever there are birds and plants. That’s where I’m happy.”

Mountain lions, bobcats, moose, elk and mule deer frequent the park, evidenced by the piles of droppings they leave.

Raptors such as the red-tailed hawk and the harrier hawk can be found year-round, while other hawks come and go with the seasons, Keck said.

The annual “Birding Big Day Blitz” in early June brings in some of the best birders in Idaho, he said. Birding competitors pair up to check off as many species of birds they can spot in a 24-hour period.

“We’re still studying and learning what we have,” Keck said.

Nordic skiing and snowshoeing are popular ways to follow the California Trail through the City. Snow depths average 3 to 5 feet in the lower elevations. Snowshoes can be rented at the visitor center.

For more extreme winter sports, Pomerelle Mountain Resort is a short drive away on Mount Harrison near Albion.

Want to spend the night? Reservations are a must

Whether visitors drive in, bicycle in or walk in, the City includes 64 standard campsites, three group sites, and an RV park with water and electricity. The City also includes campsites with corrals for horses.

Castle Rocks rents out the state park’s historic ranch house called “The Lodge,” a bunkhouse and a glamping yurt. The Lodge offers modern amenities such as a fully equipped kitchen, spacious bathroom with tub and shower, flat-screen TV/DVD with Roku, Wi-Fi and propane grill.

But don’t expect to find a place to throw out your bedroll without a reservation.

“June is our busiest month, then September,” Keck said.

More information, including camping rules and fees, can be found at the National Park Service website at nps.gov/ciro/planyourvisit/camping.htm.

The City of Rocks National Reserve is open 365 days a year. All roads are gravel, so, depending on weather conditions, some roads may be impassable from November through April. Call the Visitor Center at 208-824-5901 for the latest road conditions.