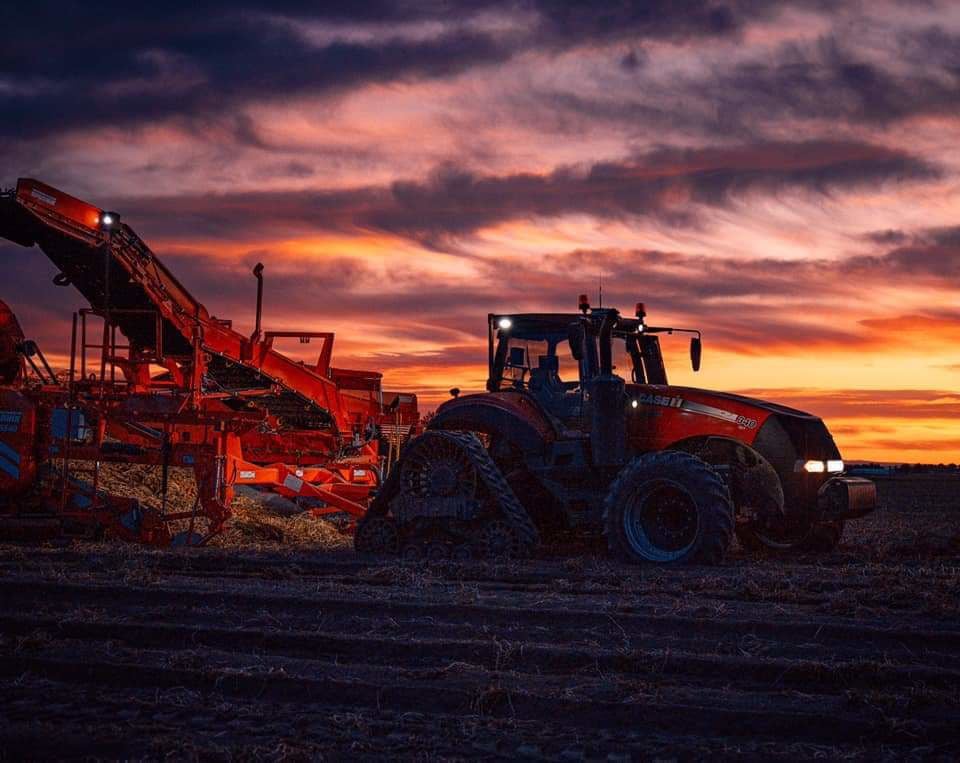 Zak and Rick Miller, who farm in St. Anthony, continue harvesting potatoes to beat the cold, which threatened to ruin crops throughout Idaho. The brothers say several people in the community helped them finish most of their harvest before the record cold weather arrived. 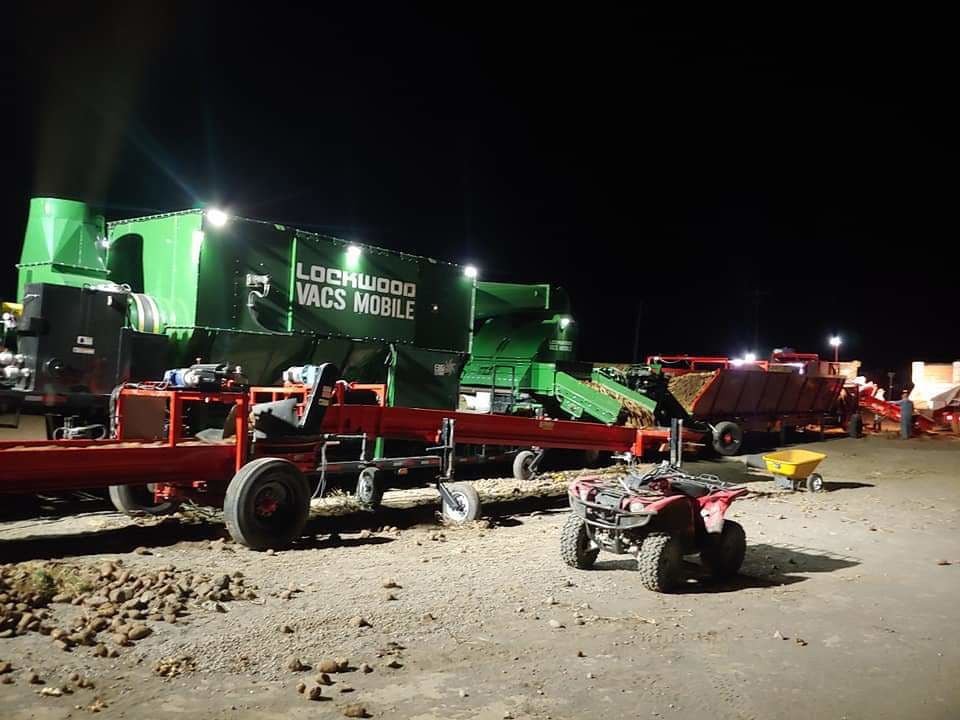 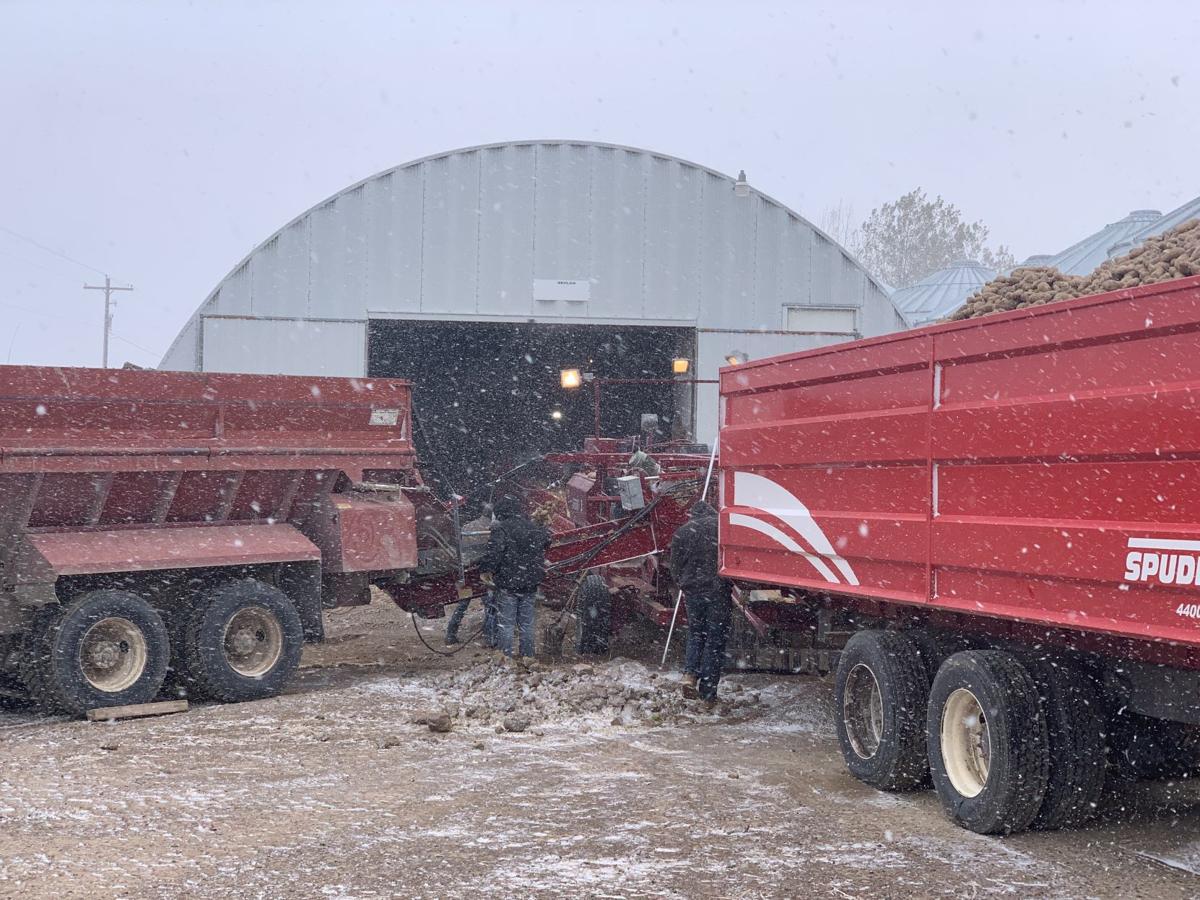 The Mickelsen family helps neighbors wrap up potato harvest in advance of damaging cold weather. Farmers throughout the region helped their neighbors to minimize losses.

Zak and Rick Miller, who farm in St. Anthony, continue harvesting potatoes to beat the cold, which threatened to ruin crops throughout Idaho. The brothers say several people in the community helped them finish most of their harvest before the record cold weather arrived.

The Mickelsen family helps neighbors wrap up potato harvest in advance of damaging cold weather. Farmers throughout the region helped their neighbors to minimize losses.

Zak and Rick Miller expect to lose a portion of their potato crop to frost damage, but their St. Anthony farm is positioned to survive thanks to a recent outpouring of community support.

At about 2:30 a.m. Wednesday — as the brothers raced against the clock to harvest their final 160 spud acres before the arrival of bitter-cold weather — Zak noticed two of his lenders from competing banks working together to repair a skid-steer loader.

Similar stories played out throughout Eastern Idaho during most of the week preceding a damaging Thursday morning frost as the region’s communities rallied behind potato farmers, who were rushing to dig the last of their spuds.

The technician who sold the Millers their Lockwood air-vac potato sorter stayed in the frigid field all night in case of a breakdown. Neighboring farmers Keith, Kevin and Brent Parker were among the first to offer help, showing up with a pair of harvesters and an entire crew of farm workers.

Examples of good deeds were too numerous for the brothers to track.

“We had cousins, we had neighbors, we had friends coming to help us, as well,” Zak said, emphasizing that not all of the faces working on his farm were familiar. “My farm is just one farm of hundreds up and down the valley I know the exact same thing happened to.”

The temperature at the Pocatello Regional Airport dipped to lows of 16 degrees at 7 a.m. Thursday, 14 degrees Friday morning and 17 degrees Saturday morning: All three of the lows set records, according to the National Weather Service.

Crop experts with University of Idaho Extension warn potatoes are more prone to damage from shatter bruising when the ambient temperature is below freezing at harvest time, and excessively cold ground temperatures can lead to frost damage, causing spuds to quickly break down.

Dustin Orr, branch manager with Northwest Farm Credit’s Rexburg office, worked along side Jake Kunz, his competitor with Rabobank, to assist their mutual clients. Orr said he helped three different farmers on that cold night. He grew up on a farm and knows how to work with heavy equipment.

“We as lenders want to see (farmers) succeed as much as anything,” Orr said. “When their crop is jeopardized, we want to help wherever we can.”

Hammond, who farms on the Egin Bench 10 miles north of Rexburg, offered to lend the Millers trucks.

“They decided they needed driving help more, so that’s what we did,” Hammond explained. “There were so many people and so many trucks going in different directions. I was just tickled to see everybody diving in and trying to help.”

Harvest on the farm continued almost nonstop for the better part of a week. Zak said they paused at 4 a.m. on Monday, when temperatures got too cold, and resumed at 11 a.m. Tuesday. They unloaded their final truckload at 2 a.m. Thursday. He still has 20 acres awaiting harvest.

He’s hopeful that the combination of frost damage, lower yields than last season and a smaller tuber size profile will result in stronger potato prices and help growers offset some of their losses.

An answer to prayers

Boyd Stokes, the Salmon Stake president with the Church of Jesus Christ of Latter-day Saints, sent word to members Oct. 5 encouraging them to fast in support of a local farmer whose potato crop was at risk of freezing.

That Pahsimeroi Valley farmer, Doug Parkinson, usually donates a semi-load of potatoes each harvest to feed the hungry in the Salmon area.

“He called the stake president and said, ‘There won’t be any potatoes this year because they’re probably going to freeze in the ground,’” said Don Mickelsen, a cattle rancher in the stake who grew up farming potatoes.

Mickelsen decided prayers alone wouldn’t suffice. He recruited about seven other ranchers from his Pahsimeroi Valley Branch and headed to Parkinson’s farm at 9 a.m. last Sunday. The group drove potato trucks and moved equipment until about 5 a.m. the next morning.

“We shut down because it was too cold,” said Mickelsen, who moved cattle upon returning home.

Later that day, however, Stokes recruited about 25 people from the broader Salmon Stake. They worked all day Monday and into Tuesday morning, until rain suspended harvest once more.

“I think he’s got three-quarters of it in. If the community hadn’t gathered together, he probably wouldn’t be half way done,” Mickelsen said. “It was just a massive outpouring of love and gratitude toward Doug, who has been so good for the valley.”

Mickelsen Farms, based in Roberts, wrapped up its potato harvest by late Tuesday night. Most of their potato harvesting equipment, however, was still out in fields on Wednesday morning — in use at other farms.

Stephanie Mickelsen, who is Don Mickelsen’s sister-in-law, said her family has land spanning from Blackfoot to the Montana border, and they loaned workers and equipment to farmers in the Hamer, Roberts, Ashton and Blackfoot areas to help them beat the cold.

One neighbor had half of his crop still in his fields when the Mickelsens sent help. In the Ashton area, where the Mickelsen’s dispatched help to area farmers from their seed potato business, Stephanie Mickelsen said conditions were so cold, straw bales had to be lit on fire to keep crews warm.

“Whenever you get into a situation where somebody is in trouble and you know the elements are bearing down on you and if you’re finished you can help somebody else, it’s just what you do,” Stephanie Mickelsen said.

Ashton Farmer Brett Reynolds finished harvesting his own fields on Tuesday night and immediately begun harvesting for a neighbor. As other friends finished digging — including his brother, Steve Reynolds, and staff from Chandler Farms and Rex Baum Farms — they, too, joined in, bringing potato trucks and other equipment.

“We brought our crew and nine diggers,” Steve Reynolds said, adding about 20 trucks from various farms were on the scene to help haul spuds. “I just kept calling guys as they were getting done, and they’d unload their last load and head up to the neighbors’.”

It’s not easy to harvest potatoes when you’re tired and working in the dark, as one of Doug Ruff’s drivers discovered at about 9 p.m. on Tuesday.

The Aberdeen farmer explained the driver struck the rear tire of a spud-filled harvester with the bumper of her truck, flattening the tire of the harvester and damaging its rim.

Ruff called his neighbor, Will Rowe, who had the same model of harvester and let him borrow the tire and rim.

Ruff said another neighbor came over on Tuesday to help him finish one potato field while he was working on another field. Ruff completed his potato harvest at 2 a.m.

In addition to the harvest challenges, Ruff estimates his yields are down this season by about 50 hundredweight per acre.

As of Friday, American Falls farmer Kamren Koompin still had 150 acres left to be dug.

“There are plenty of potatoes still out, probably in the 10 to 20 percent range,” Koompin said.

He planned to wait until Monday to resume harvesting in warmer weather. Being patient should also make it easier to separate deteriorating, frost-damaged spuds from the good ones as his crews load them into storage, he said.

“We figure we’ve got three or four days of digging left,” Koompin said.

Koompin believes the frozen fry processors and dehydrators will prioritize running late-harvested spuds first to help growers minimize their losses. Ironically, snowfall that made harvesting a bit muckier may prove to be a godsend for Southeast Idaho farmers, Koompin said.

Koompin anticipates tubers within at least the top few inches of his soil will sustain frost damage. The spuds that made it into cellars prior to the abrupt temperature drop should store well, he said.

“Up until right now, we had a pretty good crop,” Koompin said.