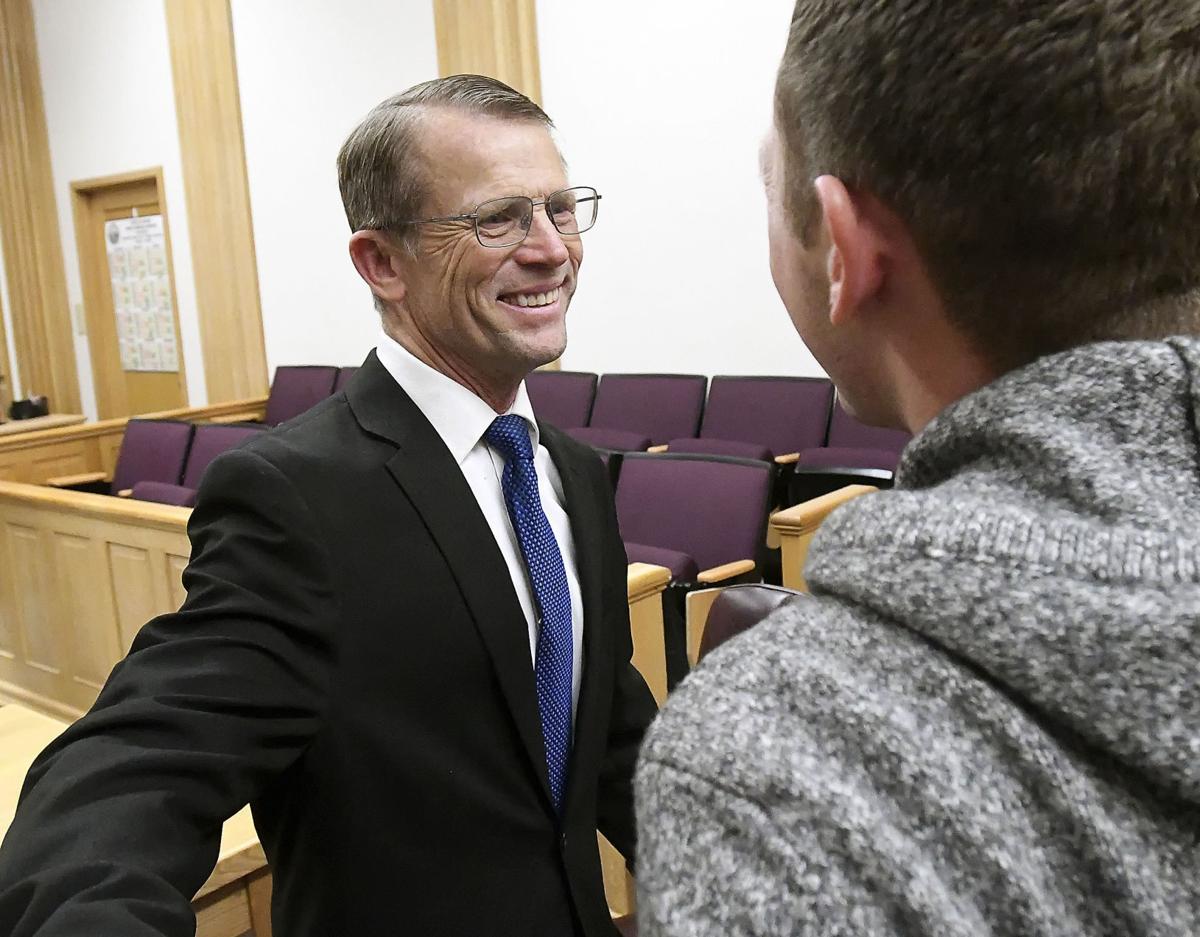 Robert Crosland smiles at son Mario Crosland after Robert was found not guilty of misdemeanor animal cruelty Friday in Preston. Crosland was on trial for feeding a live puppy to a snapping turtle in front of students at Preston Junior High School. 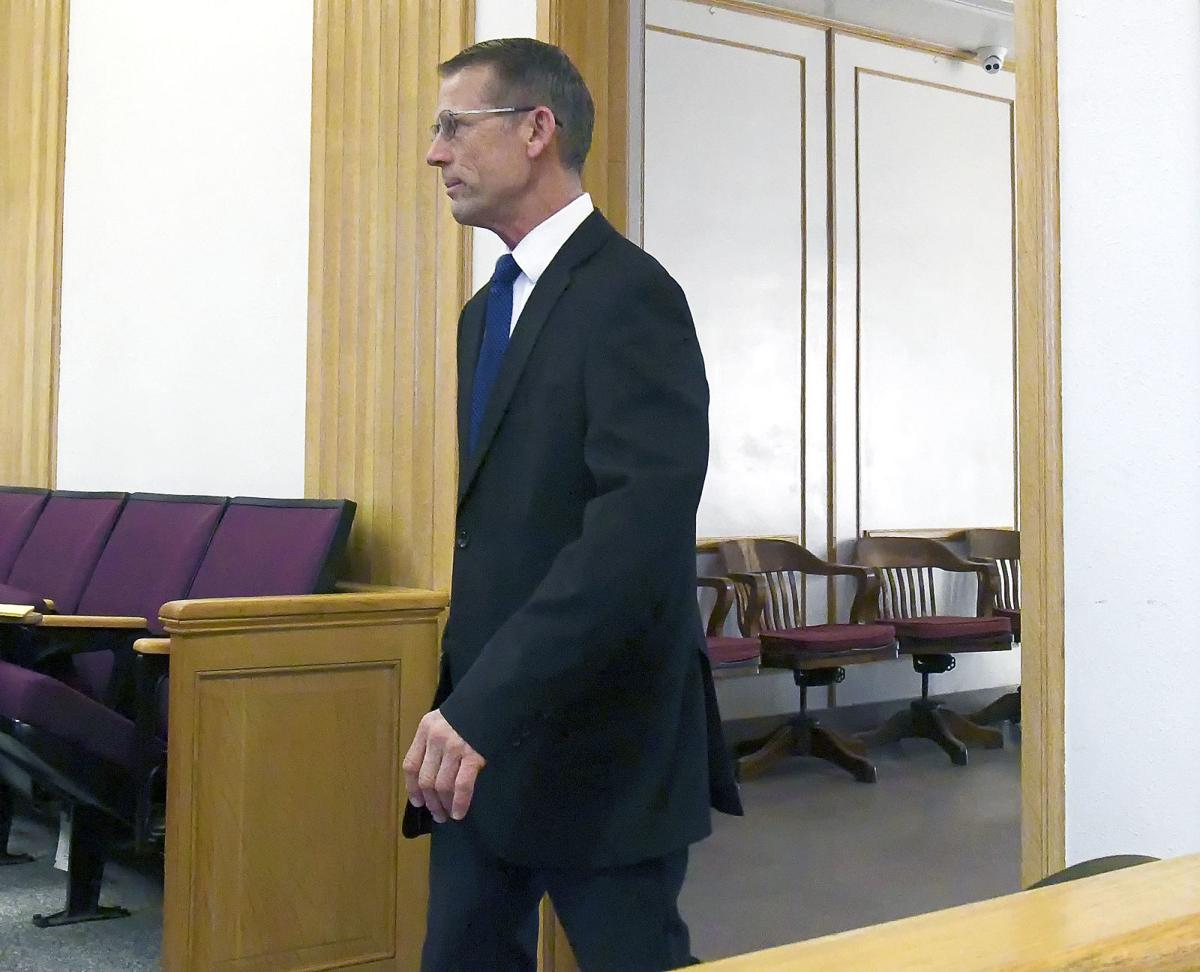 Robert Crosland enters the courtroom for his misdemeanor animal cruelty case, Friday in Preston, Idaho. Crosland is on trial for feeding a live puppy to a snapping turtle in front of students at Preston Junior High School. 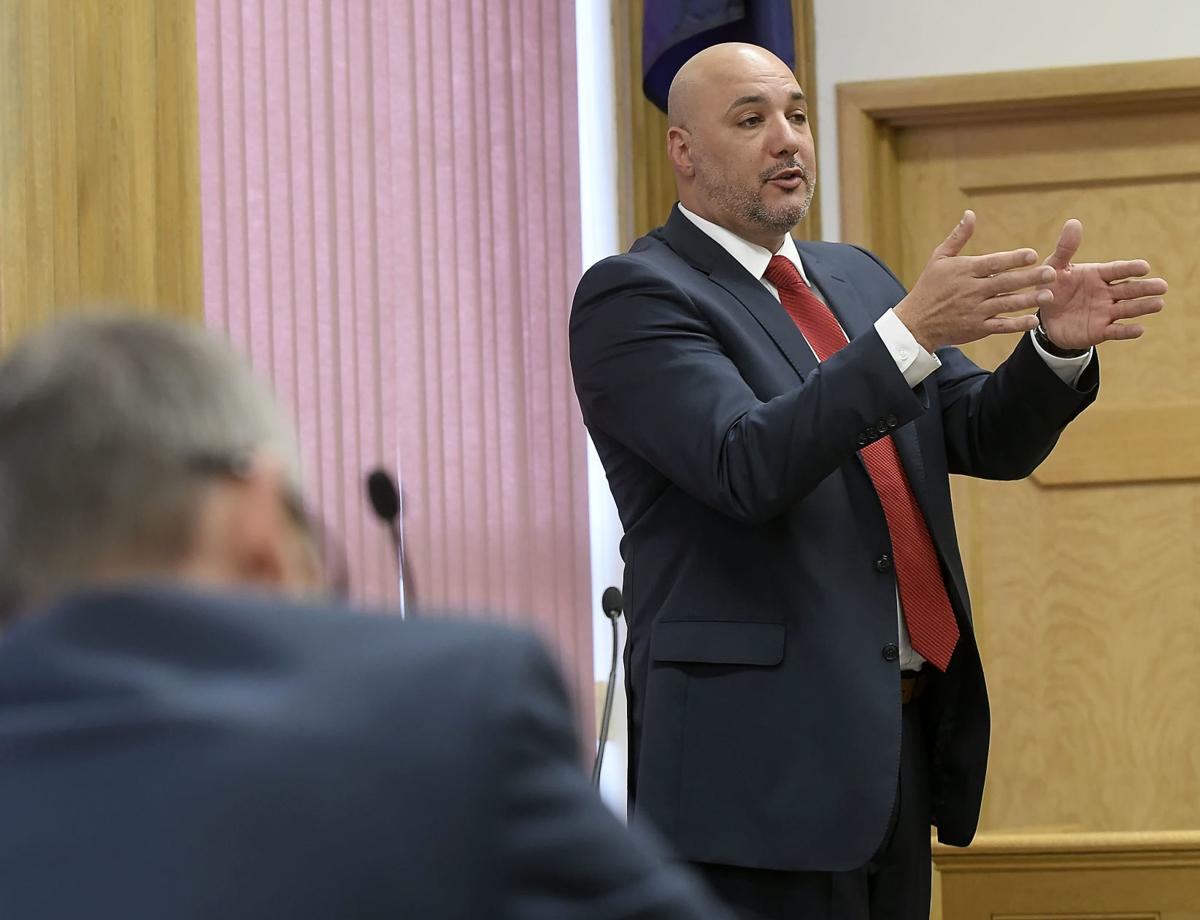 Robert Crosland smiles at son Mario Crosland after Robert was found not guilty of misdemeanor animal cruelty Friday in Preston. Crosland was on trial for feeding a live puppy to a snapping turtle in front of students at Preston Junior High School.

Robert Crosland enters the courtroom for his misdemeanor animal cruelty case, Friday in Preston, Idaho. Crosland is on trial for feeding a live puppy to a snapping turtle in front of students at Preston Junior High School.

PRESTON — The Preston Junior High School biology teacher accused of feeding a live puppy to a snapping turtle in March was acquitted by a jury Friday.

The teacher, Robert Crosland, was charged with one count of misdemeanor animal cruelty in June, after a Franklin County Sheriff’s Office investigation revealed Crosland had dropped a sick puppy into an aquarium, in which a snapping turtle then ate the animal.

“Obviously we didn’t believe the facts amounted to a criminal offense when the law was applied,” said Crosland’s attorney, Shane Reichert, of Pocatello. “The reality was that there was a ton of misinformation and gossip that were not actual facts or evidence. Once the facts and evidence were received, a jury of his peers determined he was not guilty.”

Friday marked the second day of Crosland’s trial at the Franklin County Courthouse and involved more than six hours of testimony from a special investigator with the Idaho Attorney General’s Office, four students who witnessed most or all of the incident and two of Crosland’s colleagues at the school.

While Crosland remained rather emotionless during court proceedings Thursday, on Friday before the verdict was rendered, Crosland appeared in good spirits, laughing and conversing with the four boys who were subpoenaed by the state to testify against him.

Prior to witness testimony, Friday’s proceedings began with opening statements from both the defense and prosecuting attorneys handling the case.

In his opening statement, Morse told jurors that the case was straightforward—that it was about Robert Crosland’s 25-year-old son, Mario Crosland, being given a puppy by a colleague because it was part of a large litter, prompting concerns that its mother wouldn’t be able to produce enough milk to nourish it.

Morse told jurors that Mario Crosland initially took the puppy, which was anywhere between one and four weeks old, to his home to try and manually feed it.

After the puppy refused to eat, Robert Crosland brought it to school. During the early morning hours before students arrived for classes, he attempted to feed the puppy to a large, pet python that he kept in his biology classroom, Morse added.

In concluding his opening statements, Morse told jurors that Robert Crosland again attempted to feed the puppy, which was yelping because it was hungry, to a snake in his classroom around 4 p.m. after school, though, he was unsuccessful. Robert Crosland then dropped the puppy into an enclosure where a snapping turtle grabbed it by the leg, dragged it to the bottom of the tank, waited for the puppy to drown and then proceeded to “rip it apart and eat it,” Morse said.

During his opening statement, Laggis reminded the jury that any statements made during opening arguments are not actual evidence and are rather the opinion or argument of the respective attorney. Laggis said that Robert Crosland did not dispute that he fed a puppy to a snapping turtle, adding that this was not a “healthy, happy-go-lucky puppy that is running around chasing its tail and chewing on your finger.”

“This puppy was sick, weak and wouldn’t eat,” Laggis said. “Overall it had no quality of life. Mr. (Robert) Crosland’s decision to feed this puppy to a turtle, he believes, was the best thing for this puppy. It was humane and the right thing to do.”

Mario Crosland testified that he received two week-old puppies from a farmer who told him that the puppy was going to die and he figured Robert Crosland could take care of it. Mario Crosland and his sister attempted to bottle feed one of the puppies a supplement used for baby lambs, but the puppy refused to eat, Mario Crosland said.

It wasn’t until the defense team asked Mario Crosland to describe his father that he showed how large of an emotional toll this process has taken on him and his family, fighting back tears as he spoke.

“This guy will do anything he can to save an animal,” Mario Crosland said. “I’ve witnessed it my whole life. Any animal that suffers he will do what Fish and Game can’t, and he works with them and he has put his whole life to animals. To see (the state of Idaho) try to destroy him and put one animal above another is unreal to me.”

The next four state witnesses to testify were all juvenile students who were enrolled in either Preston Junior High School or Preston High School at the time of the incident.

Taeg Christensen, 14, was in seventh grade and enrolled in Robert Crosland’s life sciences class at the time of the incident.

Christensen did not elaborate on why he left the classroom, but maintained his support for the embattled educator.

When asked by the defense if he believed Robert Crosland did anything wrong, Christensen said, “No.”

Dylan Otten, 15; Elijah Hammons, 12; and Gabe Hammons, 16, were the next students to testify. Each student said he remained in the classroom while the turtle ate the puppy. Otten and the Hammons brothers, though called as state witnesses, also offered their support of Robert Crosland, referring to the teacher by his nickname “Cros.”

The gallery erupted in applause and Magistrate Judge David A. Hooste reminded those in the audience that they could be held in contempt of court for any future outbursts.

“We talk, we text and I was his friend when I was his student,” Gabriel Hammons said. “I helped ‘Cros’ feed his animals every day. I would help him clean the cages and come in and make sure they had heat.”

One of the more compelling parts of Friday’s proceedings occurred during the testimony of McCormick. During McCormick’s testimony, Reichert played the approximate 25-minute interview that McCormick conducted with Robert Crosland in April 2018.

At the conclusion of the interview, Robert Crosland said, “I honestly thought I was doing the right thing by putting it out of its misery. That is why this has been so hard. I was always taught to not let the animals suffer.”

Robert Crosland also admitted during that interview with McCormick to feeding a puppy to a different snapping turtle he owned that died of old age approximately 10 years ago, adding that he also fed his reptiles mice, rats and rabbits.

Boehme said that it is because of Robert Crosland that she is no longer afraid of snakes and that in her 20-plus years of working with him, she never once took issue with the fact that he fed live animals to his reptiles.

And while Robert Crosland said the process took an emotional toll on him and his family, he is going to continue teaching biology to his students in much the same way he has for the past 35 years.

Robert Crosland still owns reptiles, which are still housed at Preston Junior High School with no future plans of relocation. Furthermore, Crosland will continue to feed his reptiles live food, simply because that’s what the family of animals eat. Nonetheless, Robert Crosland is relieved.

McCormick emphasized during his testimony that Crosland’s snapping turtle was an invasive species that he didn’t have a permit to keep. The Idaho State Department of Agriculture euthanized the turtle about a week after the incident.

“I am extremely happy, greatly relieved and want to wish my sincere thanks to the community,” Robert Crosland said. “They have been so good and supportive of me, and it’s what’s got me through.”

Reichert added, “The truth revealed itself and ultimately the correct verdict was reached, in our opinion. We are ecstatic for Robert and his family, because more than anything we do not believe he should have been subject to the scrutiny or harassment that he experienced.”