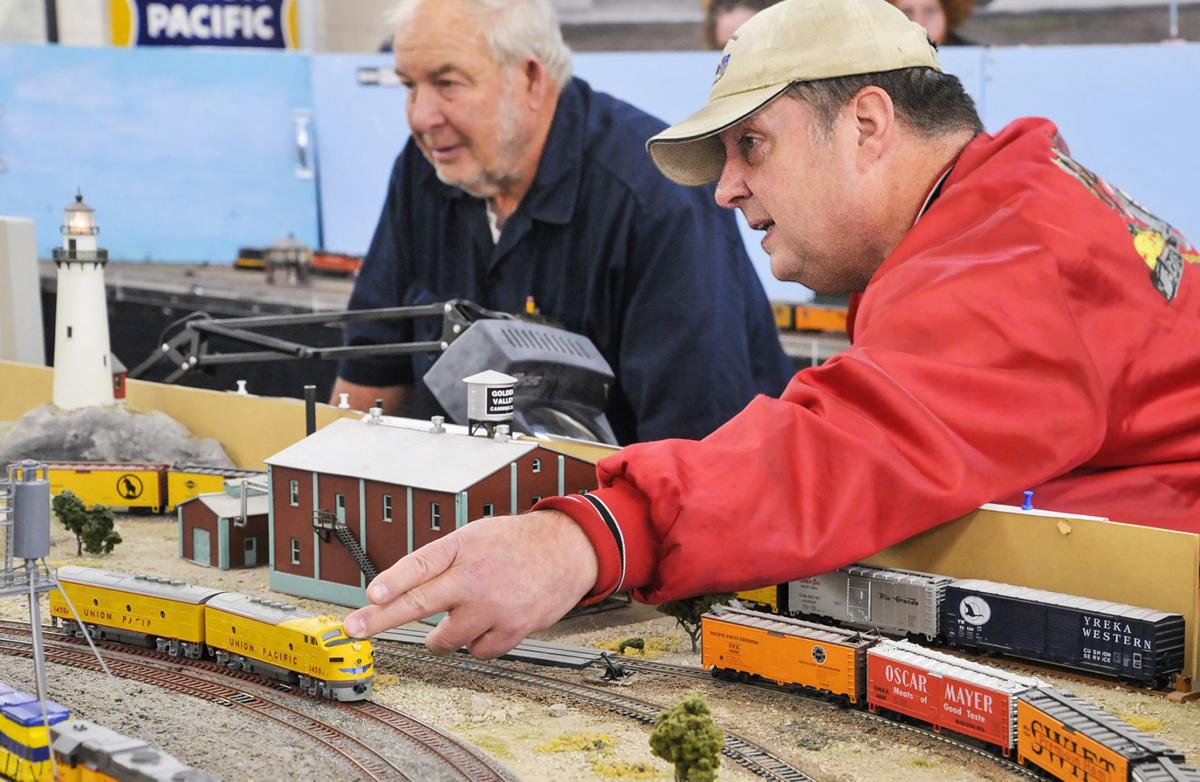 Pocatello Model Railroad and Historical Society member Mike Wilson, right, adjusts a couple of engines during the group’s open house on Saturday. President of the model railroaders Larry Gilbreath is in the background. 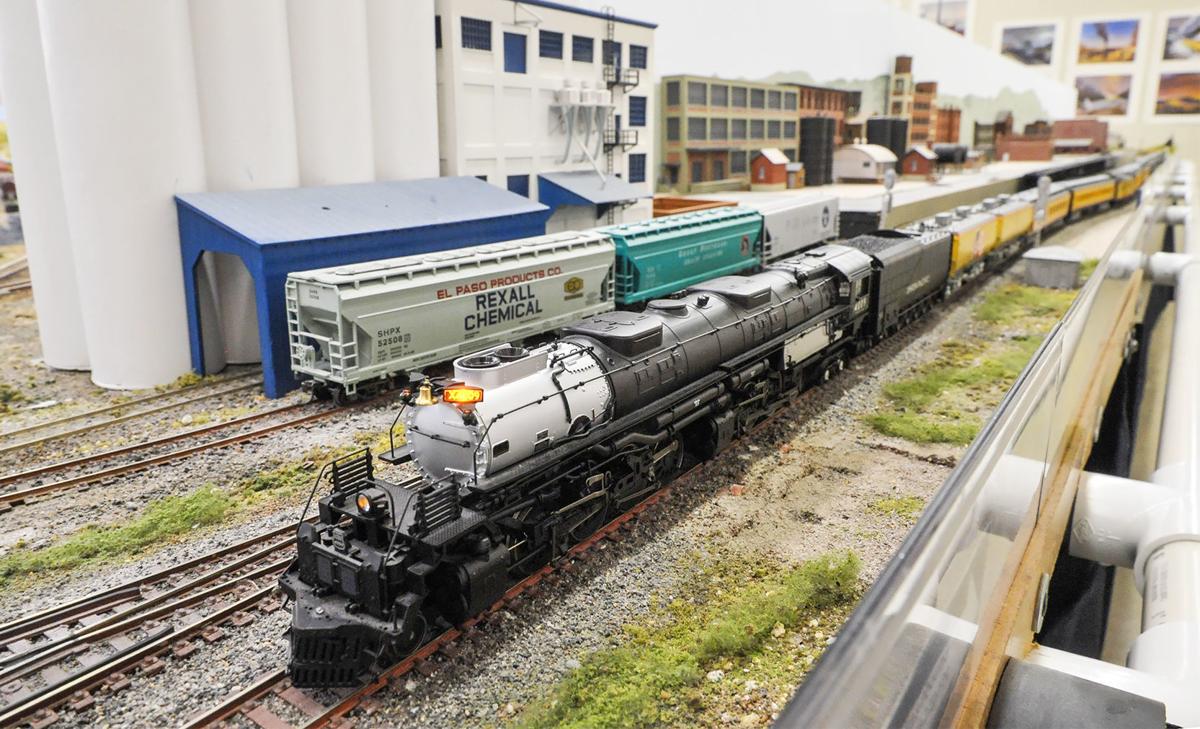 A model train pulled by a replica “Big Boy” locomotive heads down the tracks during the Pocatello Model Railroad and Historical Society’s open house on Saturday.

Pocatello Model Railroad and Historical Society member Mike Wilson, right, adjusts a couple of engines during the group’s open house on Saturday. President of the model railroaders Larry Gilbreath is in the background.

A model train pulled by a replica “Big Boy” locomotive heads down the tracks during the Pocatello Model Railroad and Historical Society’s open house on Saturday.

POCATELLO — An admittedly older crowd hovered over model train tracks at the Union Pacific building No. 59 in Old Town Pocatello on Saturday during a Pocatello Model Railroad and Historical Society open house.

At the model railroad club, the hobby continues on, but mostly by the same individuals who popularized it when they were children in the middle of the last century — instead of younger people.

Larry Gilbreath has seen the trajectory of the demographics as a longtime president of the Pocatello Model Railroad and Historical Society.

Model trainers — as he calls them — are a “dying breed.”

He said about 80 percent of his group’s approximately 25 active members are more than 49 years old. The National Model Railroad Association said its members’ average age is 68 years old, in a 2017 report.

“This younger generation doesn’t seem to want to have anything to do with it,” the 72-year-old Gilbreath said. “One of these days, it’s going to cease to exist.”

Gilbreath was the stereotypical child of the 1950s who found a model railroad track set up for him on Christmas day around the tree when he was about 7 years old.

“When you go back to the 1940s and ’50, train sets was the thing. It wasn’t like today when you got computers,” Gilbreath said. “I would say most of the guys in the club, they got a train set for Christmas and that’s where I got mine and I just hung onto the hobby ever since.”

His club, which he helped found around 30 years ago, hosted an open house Saturday from 10 a.m. to 2 p.m. Three more open houses are going to run at the same time and at the same place every Saturday until Christmas. The open houses are free, but the group is asking people to bring donations for the Idaho Foodbank. For those who don’t know, building No. 59 is south of the Pocatello railroad depot.

Gilbreath brought his childhood train set with him to the Pocatello Model Railroad and Historical Society’s open house this past Saturday.

He has a lot of model trains now, including a freight train that has refrigerator and lumber cars.

“It can relax you,” Gilbreath said. “It takes you out of the everyday hustle and bustle of life. It just gives you something else to do, so you aren’t sitting in front of the TV or computer or out running around on the street.”

But few younger people want in take part in the Pocatello club. Gilbreath said the group only has one participant who is younger than 18.

“I would like to see more of them,” Gilbreath said. “The kids, they like to look at the layout to see it, but not one of them will come talk to a member about, ‘How can I get into this place?’ or, ‘Can I come back?’ Over the years, we’ve done deals with schools, we’ve done deals with Boy Scout outfits, the general public and we never heard anyone who wants to come back and join us.”

Individuals under the age of 18 years old cannot be a member of the Pocatello Model Railroad and Historical Society but can be part of a mentorship program.

The society’s secretary Jim McLaughlin said, “All the kids that I know that have been interested, we’ve worked with them.”

Jack Shelton, 13, is the one kid in the group’s mentorship program and may lead the way for model train enthusiasts of the next generation in the area.

Shelton is a full-fledged “model trainer,” with his own model trains, a subscription to the Model Railroader Magazine, a complete lexicon in the hobby and an attendee of model train shows.

When he used to live in Rochester, New York, he would visit train yards and still does in railroad town Pocatello.

“It was very fun to watch those trains come by,” Shelton said. “It kind of sparked the hunger inside me to like these trains, and then we moved here and realized we had a huge rail yard.”

His grandparents bought him his first train set in Salt Lake City two years ago and he was off and running.

The Grace Lutheran School student doesn’t know any kids his age who like trains as much as he does, but luckily he has found his people at the Pocatello Model Railroad and Historical Society that he joined around a year ago.

“They’re very much more experienced than I am,” Shelton said. “The majority of time that I’ve been here, I’ve noticed that they’ve been able to comprehend serious problems such as derailment on the cars or if there’s an electrical problem within the track itself.”

Gilbreath said Shelton can hold his own, saying, “He’s very oriented into the hobby.”

Shelton not only speaks the language, but speaks with as much passion as his cohorts.

Describing what he loves about the hobby, he talks about an infinite landscape that can be changed by his whims.

“A layout is never finished and if you want to rebuild stuff and change it in a way, you can,” Shelton said. “That’s a very great thing. You can constantly build to whatever your imagination wants to be doing.”