Kootenai County Prosecutor Barry McHugh, after reviewing a 47-page report published on Feb. 17 by the Idaho Office of the Attorney General after an extensive investigation by that agency, decided against filing involuntary manslaughter charges against Bannock County Sheriff’s Office employees after 40-year-old Pocatello home inspector Lance Allen Quick, the son of former Bannock County Coroner Kim Quick, died from dehydration and starvation on Dec. 14, 2018, while incarcerated at the Bannock County Jail. 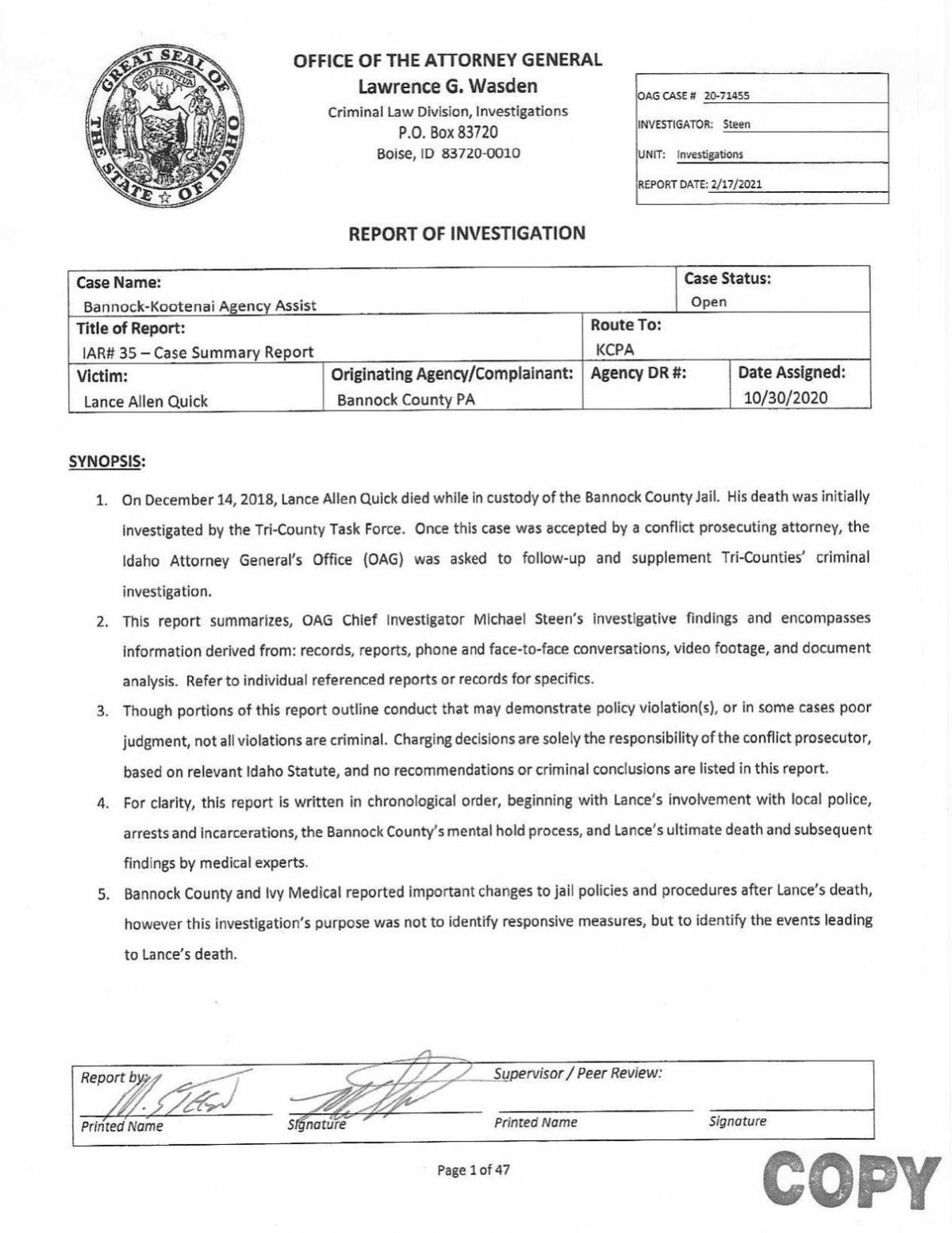 “I have considered whether the conduct of Sheriff’s Office employees individually, or acting together, constitute a crime, and I have concluded they do not,” McHugh said in a March 29 letter to Michael Steen, the chief investigator with the Idaho Office of the Attorney General who spearheaded the probe into the incident. “For a person to be found guilty of involuntary manslaughter, the state must prove that the conduct was such that an ordinary person would anticipate that death might occur under the circumstances. Further, the conduct must have been committed with reckless disregard of consequences and of the rights of others. Last, the conduct must have produced the death of (Lance) Quick.”

In his March 29 letter to Steen, McHugh indicates there was no individual who was “solely responsible for (Lance) Quick’s death,” adding that during Lance Quick’s incarceration there was “command staff, jail sergeants, deputies and contract medical personnel” who all had a responsibility for Lance Quick’s safety. McHugh says a lack of communication and miscommunication among jail personnel and a lack of processes to properly track Lance Quick’s incarceration before he had been booked into the jail were violations of jail policy but did not amount to criminal conduct. 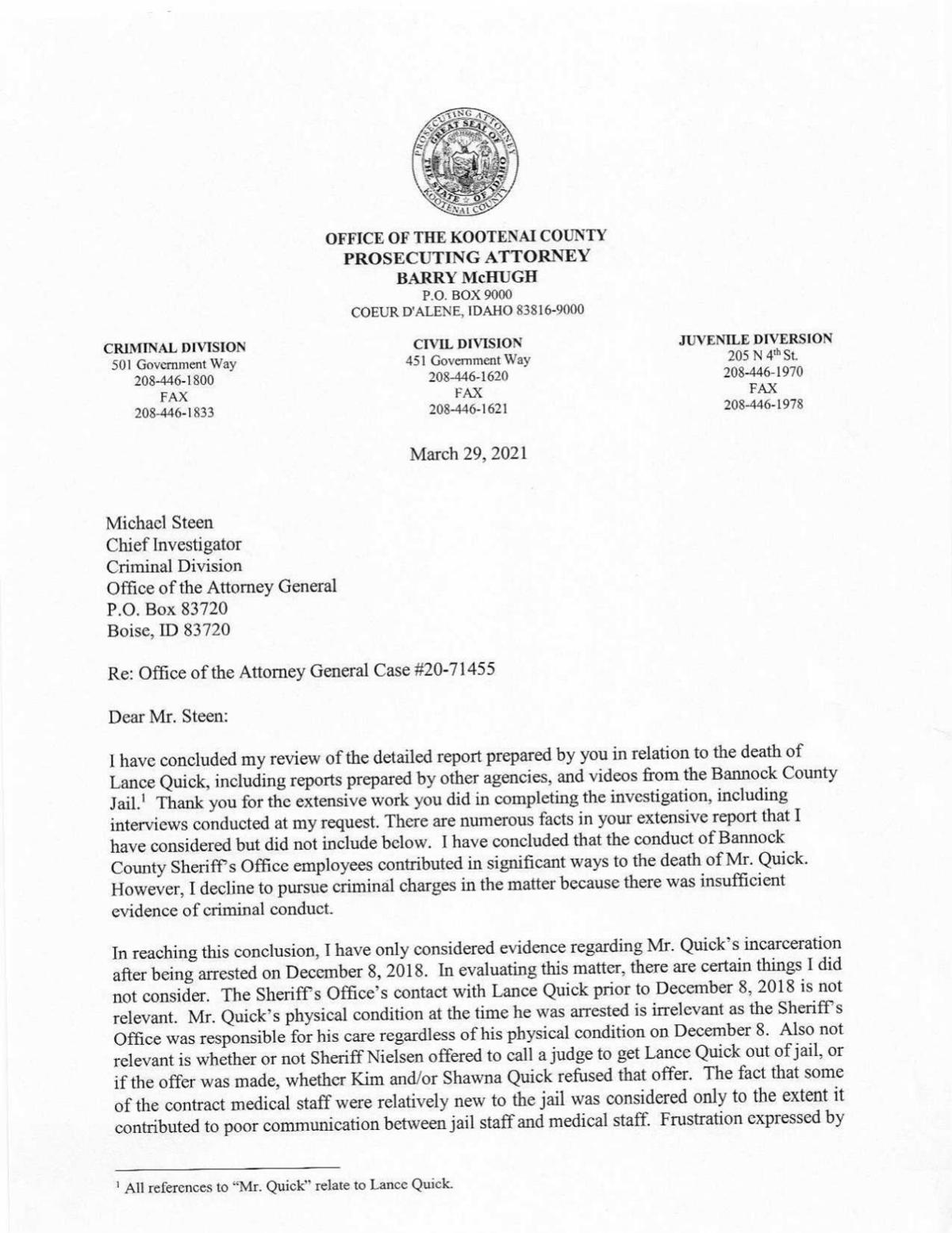 “The fact numerous individuals charged with his care did not perceive that (Lance) Quick was physically compromised, as opposed to mentally compromised, argues against a conclusion that a reasonable person would conclude that death might occur under the circumstances,” McHugh wrote in the March 29 letter. “Further, efforts were ongoing to seek a commitment, if appropriate, for (Lance) Quick’s care.”

Additionally, McHugh found there was not sufficient “proof beyond a reasonable doubt that anyone acted with reckless disregard of consequences” when overseeing Lance Quick’s incarceration.

“I have concluded that the conduct of Bannock County Sheriff’s Office employees contributed in significant ways to the death of (Lance) Quick,” McHugh wrote in the March 29 letter. “However, I decline to pursue criminal charges in the matter because there was insufficient evidence of criminal conduct.”

The Idaho Office of the Attorney General investigated the circumstances surrounding Lance Quick’s death for a little over three months. The investigation was first assigned to Steen on Oct. 30, 2020, and the report was authored on Feb. 17, 2021. The report is a summary of Steen’s findings, which derived from records, reports, phone and face-to-face interviews, video footage and document analysis.

In excruciating detail, the Attorney General’s report provides the most complete picture of the tortuous last days Lance Quick spent alive, incarcerated and mostly incapacitated in a 6-foot by 10-foot jail cell with no sink, toilet or bed.

Lance Quick’s parents, Kim and Shauna Quick, have previously told the Journal that their son wasn’t drunk or on drugs when he was arrested on suspicion of driving under the influence on Dec. 8, 2018, but he was actually in the grip of a manic episode.

For the six days Lance Quick was incarcerated at the Bannock County Jail, his condition continued to deteriorate as he went through withdrawals from the medications he was prescribed for his mental health conditions and was no longer taking. He was arrested on a Saturday by Pocatello police for suspected DUI, but by Monday he was too incoherent to be arraigned. Without an arraignment, a judge couldn’t set bond, which meant his friends and family couldn’t post bail to get him out of jail and to a hospital.

Four days after his arrest, Lance Quick was no longer just acting strangely in his cell — he’d previously rubbed food on his body rather than eating it and frequently talked and gestured to himself — but by this point he was now completely removed from reality, according to the tort claim. His cell had neither a toilet nor a sink, and Quick was filthy, covered in self-inflicted bruises, his own excrement and growing weaker and slower because he wasn’t eating food or drinking water.

Jail staff members wrote in their logs that they continued to offer him food and water, but Quick could not understand the concept of eating or drinking. At some point over the next several hours, jail staffers began noting in their logs whether Quick was still breathing when they checked on him.

On the morning of Dec. 14, he wasn’t. Quick was finally taken to the hospital and pronounced dead.

The comprehensive Attorney General’s report indicates there were several Bannock County Jail policy violations involving records and documentation deficiencies that contributed to Lance Quick’s death. The Attorney General report states there were no reports or records documenting former Bannock County Sheriff Lorin Nielsen’s actions and calls once he learned of Lance Quick’s incarceration — both up to and after his death. Additionally, there are inconsistent records regarding the meals Lance Quick missed while incarcerated.

Ultimately, Lance Quick missed a total of 10 meals while incarcerated, though only five missed meals were documented. The jail has a “hunger strike” policy that calls for medical intervention when an inmate misses three consecutive meals. That policy was never implemented, according to the Attorney General’s report.

Further, the Attorney General report states that Nielsen, during a Feb. 2, 2021, interview with investigator Steen, recalled talking to Kim Quick on the phone and offered to call a judge to get Lance Quick released into Kim Quick’s care immediately but that Kim Quick denied the suggestion, saying, “We can’t handle it. I don’t want that.”

Karra Porter, the Salt Lake City attorney who represented the Quick family in the civil lawsuit, described that portion of the report as “ridiculous” during a Monday interview with the Journal.

“The Quick family kept begging to get their son out of jail,” Porter said. “Now all of a sudden supposedly they didn’t care. That is absolutely ridiculous on its face.”

When contacted Monday evening, Nielsen described Lance Quick’s death as “a tragic situation all the way around.”

“The circumstances were very difficult for us without many mental health options around,” Nielsen said. “I feel sorry for the Quick family and I always have. I understand how difficult and frustrating mental health issues can be. I am also grateful for the officers that they can get back to normal because this was never an intentional or criminal issue in my opinion.”

The Attorney General’s probe was launched after the incident was first investigated by the Tri-County Sheriffs Association, an East Idaho law enforcement organization of numerous local sheriff’s offices that investigates incidents involving local law enforcement to determine if officials acted properly. The sheriffs’ offices in Bannock, Fremont and Bingham counties launched the investigation into Lance Quick’s death for the Tri-County Sheriffs Association and documented the findings of that investigation in a report authored on Jan. 4, 2019. That report was not provided to the Bannock County Sheriff’s Office until November 2019.

The Bannock County Sheriff’s Office didn’t provide that report to the Bannock County Prosecutor’s Office for review until January 2020 — approximately one month after Bannock County quietly paid the Quick family $2.1 million to settle a civil lawsuit that accused Nielsen and his staff at the Bannock County Jail of being “deliberately indifferent” and “grossly negligent, reckless, willful and wanton” in their actions leading up to Lance Quick’s death.

It’s unclear when Herzog provided the report to McHugh, but McHugh told the Idaho State Journal in October 2020 that he had begun reviewing the case in mid-July of that year.

The Bingham County Coroner’s Office finished Lance Quick’s autopsy report on March 25, 2019, which listed his cause of death as dehydration and starvation, according to the Attorney General report. That autopsy report was never included in the Tri-County Sheriff’s Association report.

McHugh in his March 29 letter makes no mention of all the criminal charges he considered when completing his review, other than that of the involuntary manslaughter charge he declined to pursue. Porter states there were several misdemeanor criminal charges that McHugh was forced to ignore entirely because a statute of limitations had expired.

McHugh on Monday confirmed during a phone interview with the Journal there were some misdemeanor charges of which the statute of limitations had expired prior to his involvement with the case. McHugh also indicated in his March 29 letter that this investigation was incredibly tough to handle.

“Please do not construe my decisions to be an endorsement of what happened in this case.” McHugh said in the letter. “A man with compromised mental capacity died while in the care of the Bannock County Sheriff’s Office. Reading the reports that related to (Lance) Quick’s physical and mental deterioration, and watching (Lance) Quick’s deterioration on video during his incarceration was extremely difficult. My condolences go out to the friends and family of Lance Quick.”

Current Bannock County Sheriff Tony Manu is expected to attend a press conference hosted by Porter in Pocatello on Wednesday. Porter said the Quick family was quite disappointed with McHugh’s decision not to pursue criminal charges against any Bannock County Sheriff’s Office employee but felt better after hearing from Manu about the efforts the sheriff’s office has implemented to ensure something like this never happens again. Lance and Shauna Quick, at the advise of Porter, declined to comment until Wednesday’s press conference.

“It had been disappointing until the Quick family had a really good discussion with the sheriff’s office,” Porter said. “The new sheriff’s willingness to participate in this press conference is very encouraging to the Quick family.”

Porter continued, “You shouldn’t have your child going to jail with a medical episode and have to worry the entire time that your child is in danger. Hopefully, the entire community will get some reassurance after this press conference.”