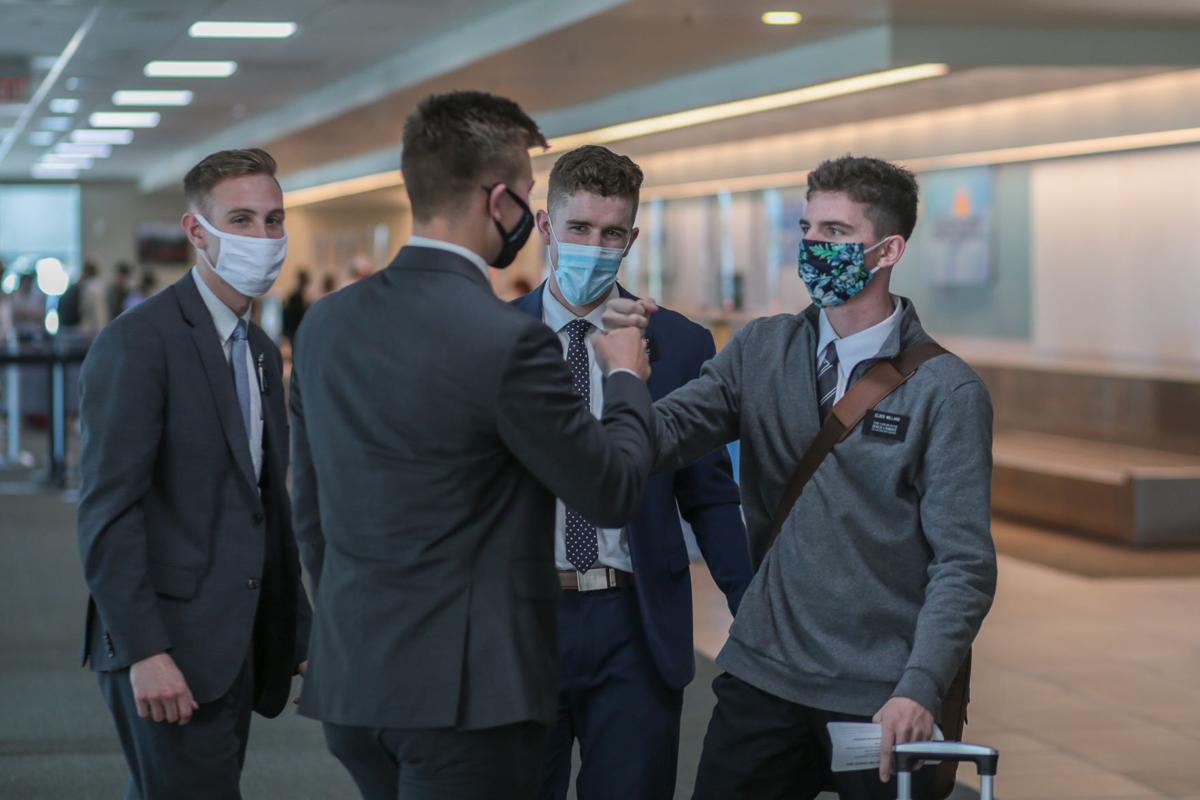 Elders with The Church of Jesus Christ of Latter-day Saints send off a missionary at the Idaho Falls Regional Airport on May 27. 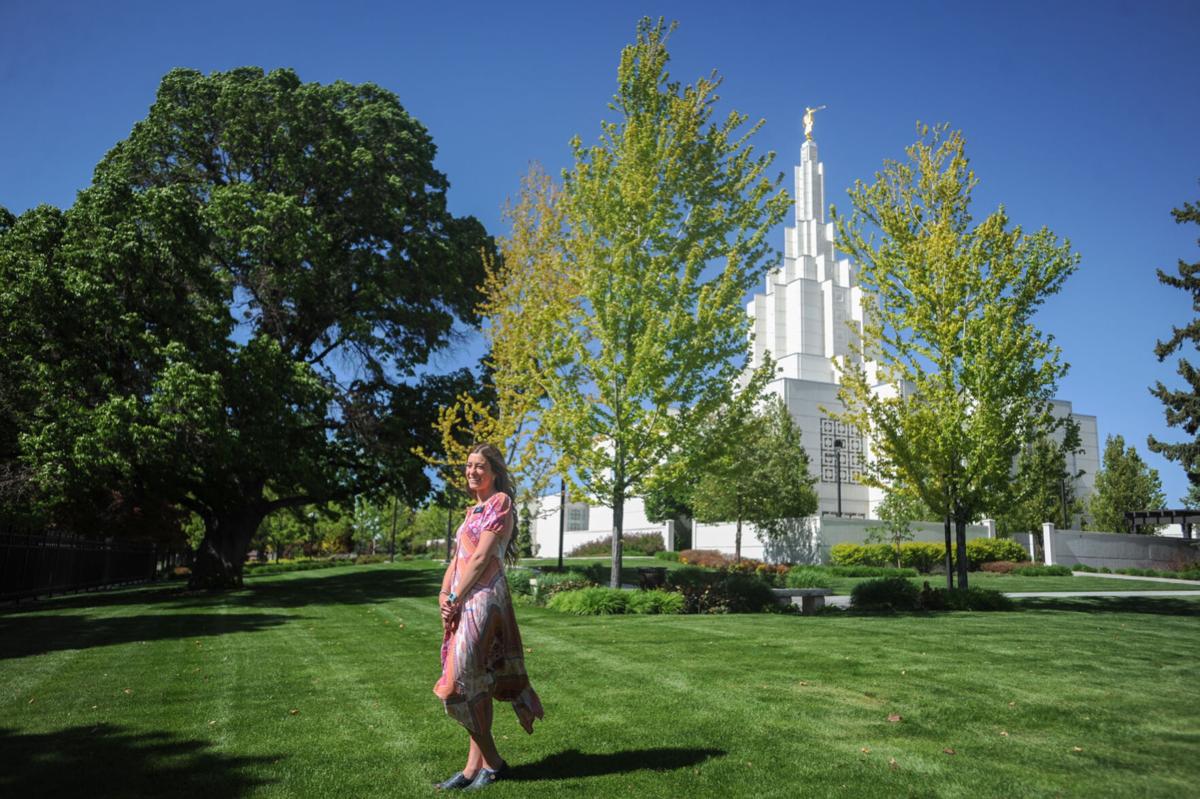 Sister Makenna Jones poses for a photo at the Idaho Falls Idaho Temple on May 28. Jones, a member of The Church of Jesus Christ of Latter-day Saints, was reassigned from her mission in Peru to serve in Idaho Falls because of the COVID-19 pandemic.

Elders with The Church of Jesus Christ of Latter-day Saints send off a missionary at the Idaho Falls Regional Airport on May 27.

Sister Makenna Jones poses for a photo at the Idaho Falls Idaho Temple on May 28. Jones, a member of The Church of Jesus Christ of Latter-day Saints, was reassigned from her mission in Peru to serve in Idaho Falls because of the COVID-19 pandemic.

Doing the Lord’s work did not look like Makenna Jones expected it to.

Jones had been assigned to spend 18 months in Huaraz, Peru, as a missionary for The Church of Jesus Christ of Latter-day Saints. But instead, her mission work will conclude at the end of June more than 4,200 miles away in Shelley.

Three weeks into her mission, Jones and her sisters at the mission were called to quarantine in Peru’s main mission home in Lima as the coronavirus swept into South America. Three weeks after that she was on her way back to the United States — on a flight where nearly all the passengers were recalled Latter-day Saints.

“I don’t think the situation hit us American missionaries until we were on our way home,” Jones said. “We were singing hymns all the way.”

Spreading the message about Jesus Christ around the world is a core principle of the Latter-day Saints’ belief system. All capable young members of the church, and especially young men, are encouraged to follow the calling and head out for their missions around the time they finish high school.

“We almost lived at the airport for those early weeks,” said President Matt Hurley, who oversees the Idaho Falls Mission. Hurley picked up each of the newly reassigned missionaries and kept in regular contact with all 250 as they worked across the state.

Nearly a year later, that class of missionaries are finishing their work just as international travel and in-person messaging becomes an option again. Outreach work is transitioning back away from Facebook messages and video calls. The Mission Training Centers, which normally bring together young believers en masse to prepare for their assignments, have just begun to restore in-person options this month.

“Their whole life they have looked forward to this experience with thousands of other missionaries, and all of a sudden they’re online, in their bedroom, in front of a Zoom screen,” Hurley said.

When Moss returned home to Idaho Falls, he quickly worked to get back into the field and get reassigned to a new location stateside. After a few weeks, he got his new assignment from President Hurley: the Idaho Falls Mission.

“I thought he was making a joke at first,” Moss said. “It was a bit of a surprise to be serving that close to home, in my home mission. But it became the most exciting thing.”

Moss has shifted between work in Blackfoot, St. Anthony and Jackson, Wyoming, over the past year. He works six days a week contacting potential new members around him.

Most of the traditional approaches that missionaries took to reach new members were impossible. Going door-to-door was ruled out. Sitting down to eat with families that were interested in meeting with a missionary was tough to organize.

Moss, Jones and other local missionaries relied heavily on Facebook to look for people who might be interested in the church’s message. They also worked through other Latter-day Saints to find connections in the community. Idaho made that outreach easier; more than a quarter of the state’s population are LDS, and eastern Idaho has an especially high concentration of church members.

“It was more of an organized process and it could be a more powerful one. You have friends helping to teach, instead of two random missionaries coming off the street,” Moss said.

Moss estimated that he ended up working with more than 50 families in the region, several of whom chose to be baptized into the church. Several members of the Idaho Falls Mission said they’d seen an increase in new members during the past year.

“There was so much negativity in the world, and here come these missionaries sharing a message of hope and peace,” Hurley said.

The Provo Missionary Training Center announced last month that it would partly reopen in June. The center will be limited to between 150 and 250 new missionaries at a time, far below its capacity of nearly 3,700 people, and focus on the members who aren’t learning a new language for their assigned location. The international training centers in Ghana and New Zealand will also be providing in-person training again soon.

Porter Elison will be heading out to Washington, D.C., in August to begin his missionary work. Elison was not sure whether he’d be among the group allowed to train in person at the Provo center. He heard about the Facebook and Zoom work from friends who were currently serving, but that hasn’t dissuaded him for heading out right after graduating from Idaho Falls High School.

“I always wanted to go serve right out of high school. I think it’s the best time to learn how to do things on my own so I’m prepared for college later,” Porter said.

A pro-vaccine stance has been a major part of the church’s push to re-expand missionary work. The church announced in April that missionaries will need to be receive all required immunizations, including the COVID-19 vaccine, in order to serve outside their home country. New missionary training at the Provo center will be initially limited to vaccinated members.

As the number of missionaries in the region returns to a normal level, many of those who were moved to eastern Idaho early on are preparing to start college. Moss said he plans to stay in the region and attend Brigham Young University-Idaho.

Jones had taken online classes through BYU-Idaho, but after praying on her decision, decided to attend Southern Virginia University.

Jones tries to see the benefits from both ends of her missionary experience. On the one hand, she described the time she was able to work in Peru as “the best six weeks of my life.” On the other hand, she said that she ended up learning things from the unexpected time in Idaho that she might not have found otherwise.

“My plan is not what the Lord’s plan is,” Jones said. “He knows more than I ever will, and I need to be willing to adapt to what he needs me to do.”