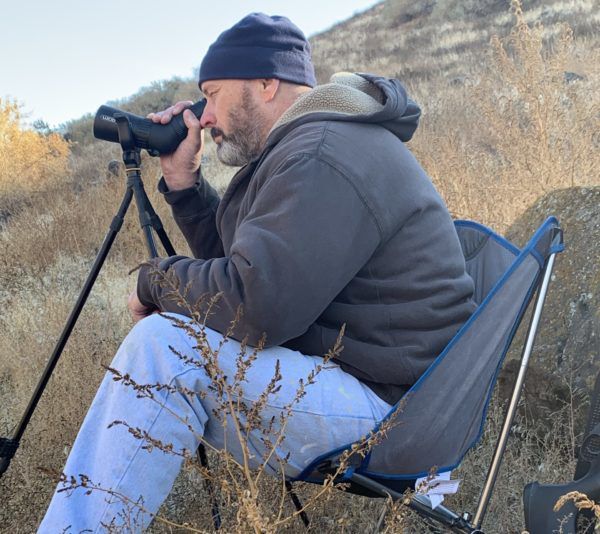 Last week we talked about baiting for bears. This week we’re going to talk about the spotting/stalking (S/S) method. So why would you want to S/S instead of baiting?

2. You don’t have any free time to bait.

3. You’re an out-of-stater so it’s not possible for you to bait.

4. Because it’s a cool way to hunt and it works.

If you’re going to be successful at S/S then you’re going to have to have the proper equipment. Years ago, we saw 10 bears in two afternoons. I only saw one bear before Ed Sweet and Gary Kirkpatrick because I only had some mediocre 8x42 binoculars. They had some high-dollar spotting scopes. To be successful, you have to have good glass. That doesn’t mean that you have to buy $2,400 binocs and $2,500-$3,500 spotting scopes but you don’t want a set of Blue Light specials either.

Here are a couple of decently priced optics that you should be happy with. I use Riton Optics X5 Primal 10x42 HD binoculars. They seem almost as crisp and clear as my $2,400 European binoculars. I used to recommend 8x binocs but you just miss too much game so carry 10x.

And then you’ll need a lightweight tripod to set your spotting scope on. (You can also use the tripod for shooting sticks.) Some of the tripods that I’ve tested weigh more than a BIG spotting scope. Gee, they are stout enough to set your house on. Again, if they’re that heavy you just won’t end up lugging them up a mountain.

Then to carry all of the above gear plus your water and snacks you’ll want a medium-sized backpack. I tested out the Alps Mountaineering Ghost and Baja 40 backpacks last year and they should work fine.

Now that we’ve covered what gear you’ll need, let’s cover how to S/S. In early spring bears will be coming out of hibernation. After fasting all winter their stomachs are tender and they’ll be eating grass and flower tops.

You’ll see them at dusk feeding on hillsides like deer (in singles). They’ll be out grazing at the snow line. When I say at the snow line, that doesn’t mean within 2 feet of the actual snowline but somewhat following it.

I don’t know the name of the flowers but they like eating the top off of the yellow flowers. I remember one year I went back up after season to film some bears. I saw one and he was ripping into the grass faster than a grazing cow. It was a weird deal. I got within 17 paces of the bear and figured that was probably close enough so I stopped and snapped a pic with my 35mm Canon. At the sound of the click, he spooked. I think that I could have walked up and slapped him on the rear.

So what you’ll want to do is after work run up to the mountains and hop up on top of a ridge where you can get a good view and set up your spotting scope. How to properly glass is a whole article in and of itself but briefly, set-up and take a pad or an Alps Mountaineering Dash chair to set on. If you’re not comfortable then you aren’t going to be able to glass too long.

You need to have a glassing system. Scan across the opposite ridge. Get to the end and drop down 50 yards and scan back to the other end. Repeat, repeat to the bottom of the mountain. Wait a few minutes and repeat. Bears will feed in and out of cover.

They’ll come out a little bit before dusk so you don’t have too long to find one and sneak up on it.

When you see one, you’ll have to formulate a game plan fast. Is he the bear you want? Is it a sow with cubs? Is it moving along too fast for you to be able to get to? If it is too far to get to before dark you may have to move over the next evening and set up closer. If there is good grass, he should be in the same vicinity tomorrow.

If he’s the bear you want mark where he is. Is there a tall burnt tree near him? A patch of white flowers? When you get over there the area will look a lot different than from where you were. He may be hard to find.

There is so much more to cover but once again, we are out of room. Good luck. Spotting/stalking for bears is a blast. Have fun.