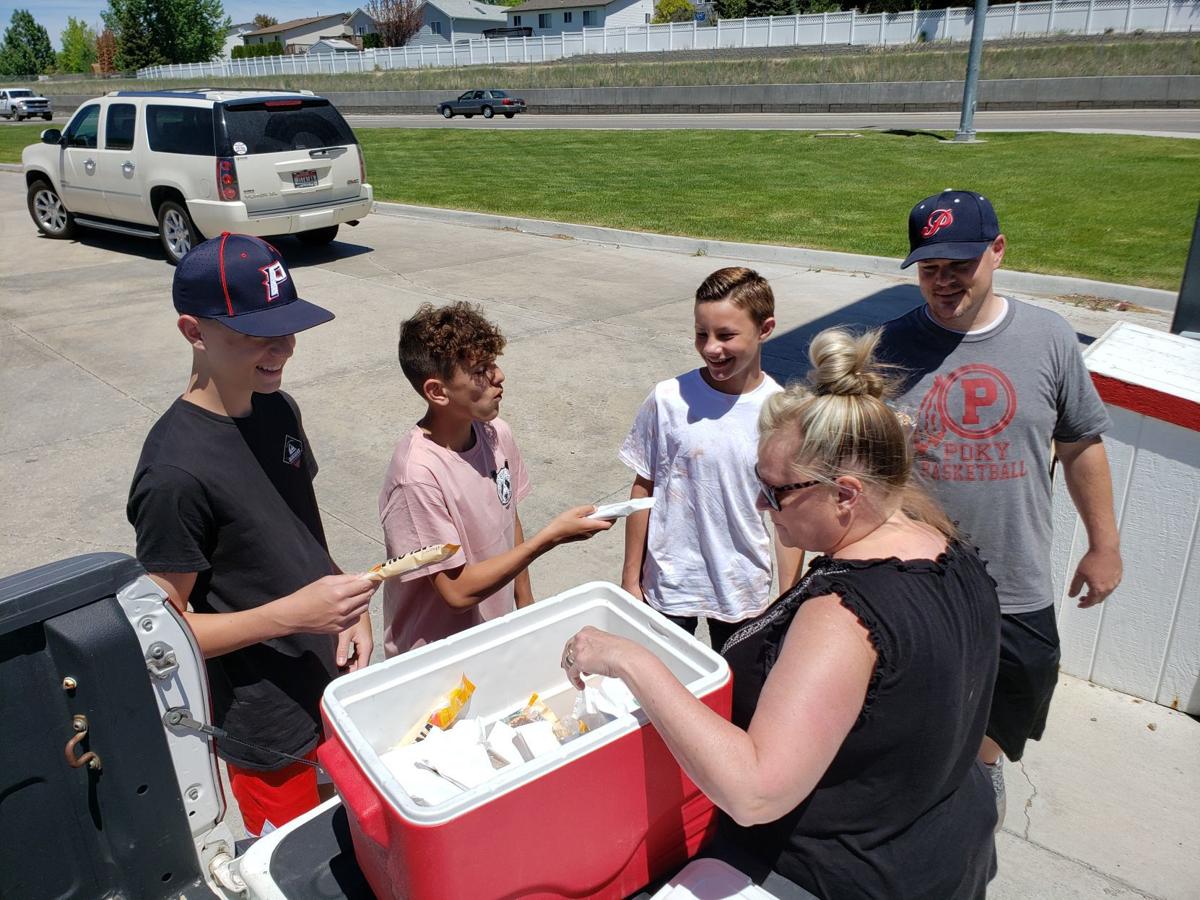 Alameda Middle School teacher Valynne Underwood, bottom right, hands out ice cream from a cooler to students and a parent during a drive-by farewell celebration in Pocatello on Thursday marking the end of the school year. 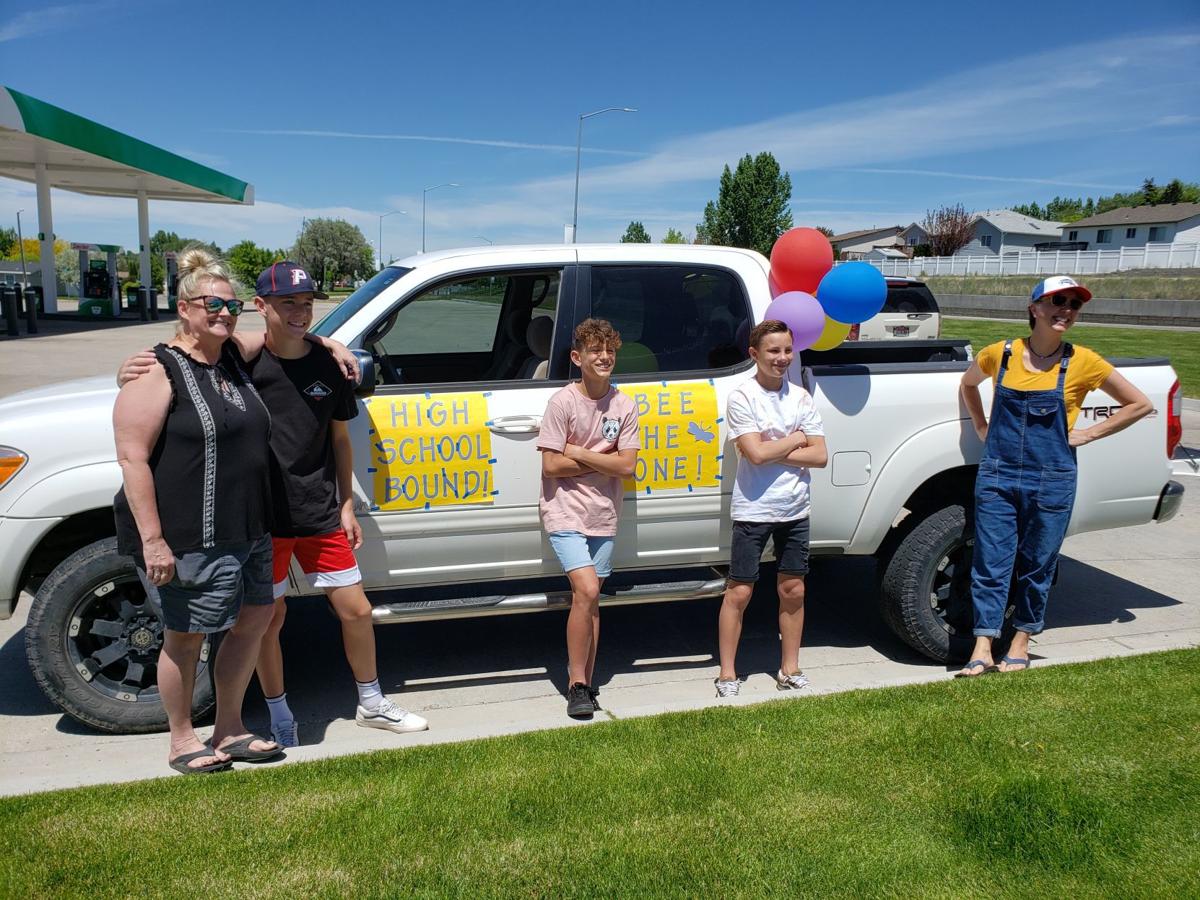 Valynne Underwood, far left, and Liz Knight, far right, stand with some of their students that helped hand out ice cream during a drive-by farewell celebration in Pocatello on Thursday. 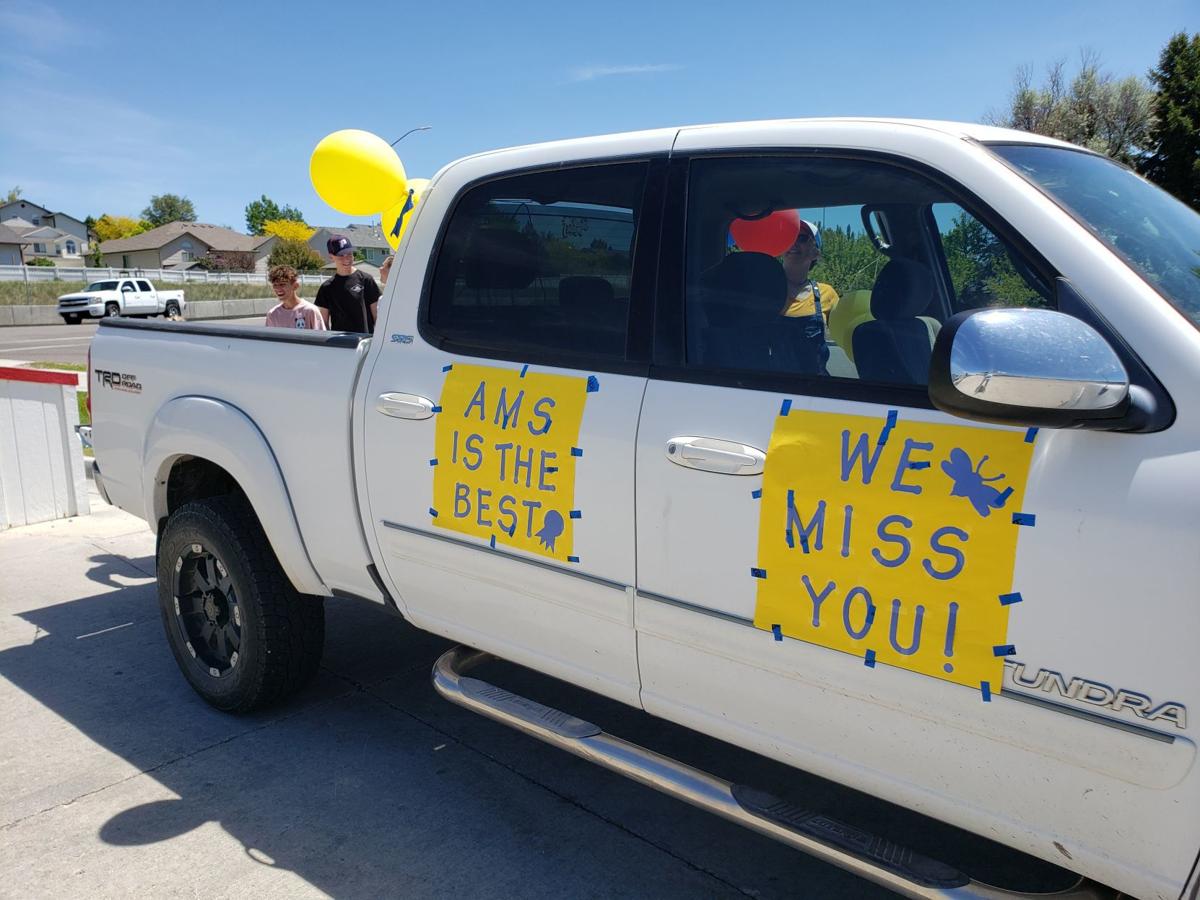 The truck Alameda Middle School teachers Valynne Underwood and Liz Knight used to travel around the Gate City handing out ice cream and saying farewell to all of their students who will begin high school next year.

Alameda Middle School teacher Valynne Underwood, bottom right, hands out ice cream from a cooler to students and a parent during a drive-by farewell celebration in Pocatello on Thursday marking the end of the school year.

Valynne Underwood, far left, and Liz Knight, far right, stand with some of their students that helped hand out ice cream during a drive-by farewell celebration in Pocatello on Thursday.

The truck Alameda Middle School teachers Valynne Underwood and Liz Knight used to travel around the Gate City handing out ice cream and saying farewell to all of their students who will begin high school next year.

POCATELLO — Two local teachers on Thursday took to the Gate City streets to say farewell to their departing eighth-grade students who are expected to enter their high school stomping grounds as freshmen next year.

Eighth-grade English teachers at Alameda Middle School Valynne Underwood and Liz Knight couldn’t accept saying goodbye to their students via email or text and instead organized a massive drive-by farewell celebration complete with water balloon fights, free ice cream and congratulations to the graduating middle school students, which were shouted through a loudspeaker.

“We didn’t want the year to end with this distance between us and the students and without that proper closure,” Underwood said. “As much as we know the students love to see us and say their farewells, teachers really appreciate that bond, too. So it was important for us to end the year on a positive note.”

Knight added, “We have not seen a majority of our students face-to-face since March, so today was definitely needed. The thing that most of us like about teaching is that one-on-one interaction. We had everything else — the assignments, the grading the questions — but we didn’t have that aspect that makes it all worthwhile. It was tough for all of us with everyone still isolated, and we just did not want to end the year that way.”

Earlier this week, Underwood and Knight input the addresses of all 200 of their students into Google Maps, created a route plan and hit the streets running on Thursday morning.

The teachers loaded up into a pickup truck with balloons and Alameda Middle School signs attached, one giant cooler full of ice cream and another stocked full of water balloons.

This was a drive-by these students won’t be soon to forget, Underwood said.

Alameda Middle School Vice Principal Krystel Lockyer described Underwood and Knight’s drive-by celebration as a fantastic way to connect with their students, adding that for many this event served as a replacement to the several end-of-year festivities middle school students normally enjoy.

“At the end of the year, we usually go swimming, or see a movie, host an award ceremony and talent show and the kids this year were unable to enjoy that,” Lockyer said. “We usually hand out ice cream during the end-of-the-year party that is also a pseudo-barbecue with a time for students to sign each other’s annuals. That was one thing that the students were incredibly disappointed about is they have these yearbooks that are empty, which is pretty much how the end of the year felt for them.”

In referencing year-end celebrations, Underwood added, “Normally the end of the year is a time not just for the students but something us teachers look forward to as well. Going to the pool with them is so much fun and we just couldn’t sit idly by knowing that we didn’t get that experience this year. I just feel great being able to say goodbye.”

Knight said some of the highlights of Thursday’s drive-by farewell celebrations included the opportunity to give ice cream to a student who had just several hours earlier had her wisdom teeth removed. Additionally, Underwood and Knight appreciated being able to meet with twins that each of them had as students.

“We also saw a set of twins, one of whom was enrolled in my class and the other had Mrs. Underwood,” Knight said. “That was fun to get all four of us together to talk about what the online instruction experience was like for them and to hear what they had planned for the summer.”

Lockyer added, “The best quote that I heard from a kid was, ‘I promise, I will never complain about having to go to school ever again.’ And I think that is really telling about how difficult it is for kids, teachers and staff to not have that interpersonal relationship and see each other face-to face every day. It’s kids that are typically the reason we all got into education in the first place.”

Additionally, Lockyer said the drive-by celebration — which Knight and Underwood funded and organized entirely on their own — is indicative of the type of teachers they are inside the classrooms all year long.

“This end-of-the-year celebration really speaks to their character and how much Liz and Valynne love these kids,” Lockyer said. “They are fantastic teachers who prioritize relationships above anything else and are always thinking about what is best for these kids. It’s a priority for them to see their kids, to make sure that they are OK and to make sure they know they love them even though they haven’t seen them in three months.”

While Knight and Underwood weren’t able to provide their departing students with the same experience others have enjoyed before them, they worked to provide the best last hurrah possible.

And for most students, such as Rhidge Bareala, who assisted Underwood and Knight part way through Thursday’s ice cream distribution efforts, they couldn’t ask for more from their now former teachers.

“Today was lit, dude, straight up,” Barela said. “It was a great replacement. To be able to help give these students ice cream and wish them a happy summer was just the best.”