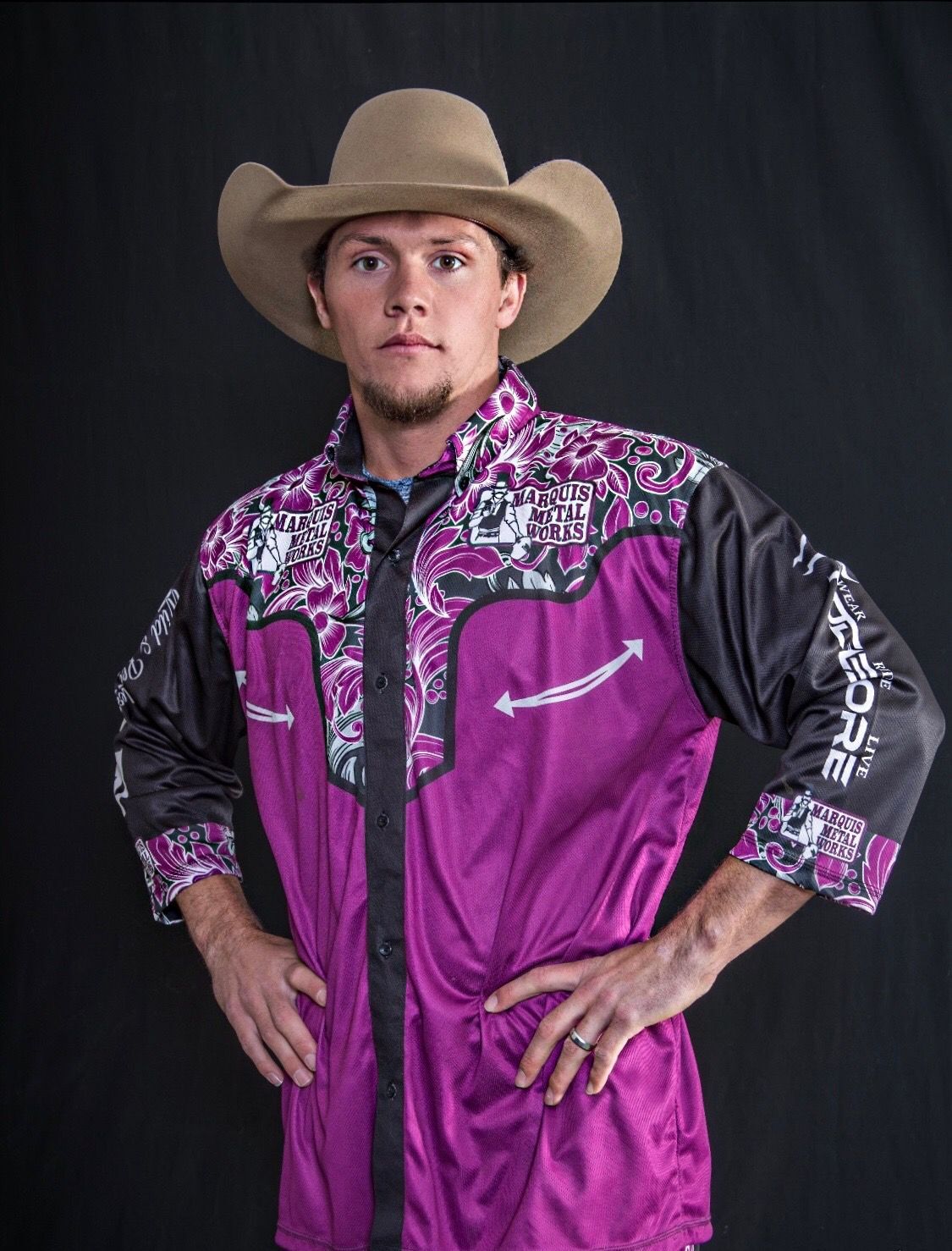 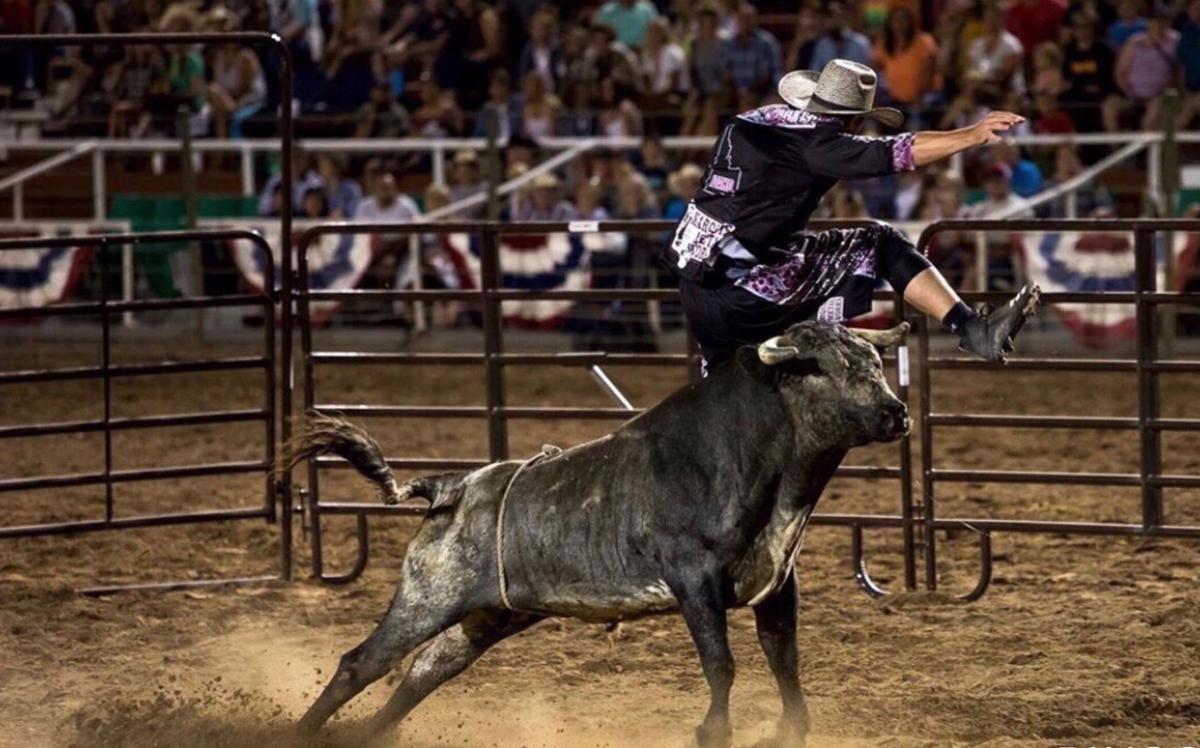 Ryker Fenstermaker jumps over a bull last summer at the Ogden Pioneer Days rodeo in Utah.

Ryker Fenstermaker jumps over a bull last summer at the Ogden Pioneer Days rodeo in Utah.

POCATELLO — There’s nothing like having a bull’s horn going through your thigh to get your adrenaline pumping.

Idaho State University employee and alum Ryker Fenstermaker knows. The 23-year-old from Burley, who graduated this spring with a College of Business degree in marketing and management and plans to earn a Master of Business Administration from ISU in the future, just can’t get enough of the rush of fighting bulls.

“The adrenaline rush is beyond anything I’ve ever experienced, honestly,” Fenstermaker said. “It’s a blast. It is something that every time before I fight, I still have the goosebumps on my arms and the butterflies in my stomach, and it is something I crave.”

Generally, Fenstermaker, who works full-time for ISU housing doing maintenance, leaves the ring unscathed, but there was the time in Nampa at the Professional Bull Riders competition last November mentioned above, which Fenstermaker described as “another scary moment.”

Then there was the time about two years ago in Colorado Springs when a bull fractured his nose a month before his wedding. Bullfighters have the task of keeping bull riders safe by distracting the bull, a job that comes with some pretty big risks.

“I tried to do what is called the ‘step through,’ which is a move like a juke you’d see a football player throw,” said Fenstermaker, who played football, wrestled and golfed in high school. “ I tried to throw a fake, and I didn’t move my foot fast enough and his horn caught my foot, and he kind of sent me in like a front flip and when my head was coming down, his horn was coming up and we just met in the middle and he folded my nose right over. That wasn’t fun at all.”

“That was a scary moment,” he added. “ I had to get surgery and get it healed up for the wedding.”

The last three summers Fenstermaker has been a bullfighter at rodeos and competitions, pursuing an interest that formed in high school but he didn’t start pursuing it until he came to Pocatello to attend ISU.

“I was pretty competitive in football, so my parents were always like, ‘No, you are not going to do that, stay in sports and stay safe,’ kind of thing,” he said. “Once I turned 18 and moved up here for college, I found a camp, it was a bullfighting camp or a rodeo school, for a weekend in Twin Falls, Idaho. I paid my tuition and went down for the weekend, and ever since then, I’ve been doing it. I hustled for a year just making phone calls, calling stock contractors and corporations that needed bullfighters and finally got the ball rolling and it has taken off.”

Bullfighting has allowed him to “see some cool places and do some pretty sweet things,” including competing two years at the Bullfighters Only Las Vegas Championship and participating in competitions and rodeos in Colorado, North Dakota, Oregon, Washington, Wyoming and other surrounding states.

“Usually during the summer about every weekend I’m going to rodeos and doing cowboy protecting or going to a freestyle competition and competing, but with the virus, things have kind of slowed down quite a bit this summer, although there are still some rodeos out there, and summer is starting to pick back up.”

Bullfighters at rodeos are not rodeo clowns — they are strictly there to protect the bull riders.

“What we do in cowboy protection is that we work rodeos, and during bull ridings when the bull rider falls off the bull, we step in and distract the bull or do what we have to do with the bull so the bull rider can be safe and away from the bull,” he said. “We are strictly business, we don’t tell jokes, we don’t entertain the crowd in any way except maybe our athleticism and creativity protecting the bull riders. The rodeo clowns, they have the barrel, they tell the jokes, they interact with the crowd. It is a separate deal.”

The pinnacle of this endeavor is the satisfaction he gets from protecting the bull riders, including those that compete at high school rodeos.

The other side of his vocation is the American freestyle bullfighting, which is not the same kind of bullfighting that originated in Spain and is practiced elsewhere. With Spanish bullfighting, the bulls are stabbed and killed.

“The style we do here in America is completely different,” Fenstermaker said. “We think of it more as a dance. You compete as one, you against the bull, for either 30 seconds or 45 seconds, just jumping over them, running around them, kind of just spicing up your interaction with the bull. In that, you are competing against other bullfighters. Everybody has their own bull and you kind of do unique, creative aspects to just get the highest score possible.”

There are some who solely make a living pursuing these dual, compatible activities. Before the coronavirus hit, Fenstermaker had planned this summer, after earning his degree, to pursue his passion full time, hitting bigger competitions and bigger purses at events further south in states like Texas and Oklahoma.

He still plans to give full-time bullfighting a try and also plans to combine it with “western sports marketing” using his bachelor’s and MBA degrees from ISU. He plans to pursue his MBA at ISU either this fall, or he may wait to begin it next spring after taking some graphic design courses.

“With the virus hitting, it was definitely nice to have a full-time job to fall back to,” he said. “There are guys out there that definitely make a living just strictly doing this, traveling and it is definitely a goal of mine in the near future. Especially with marketing being my degree, I think I should be able to travel very well.”