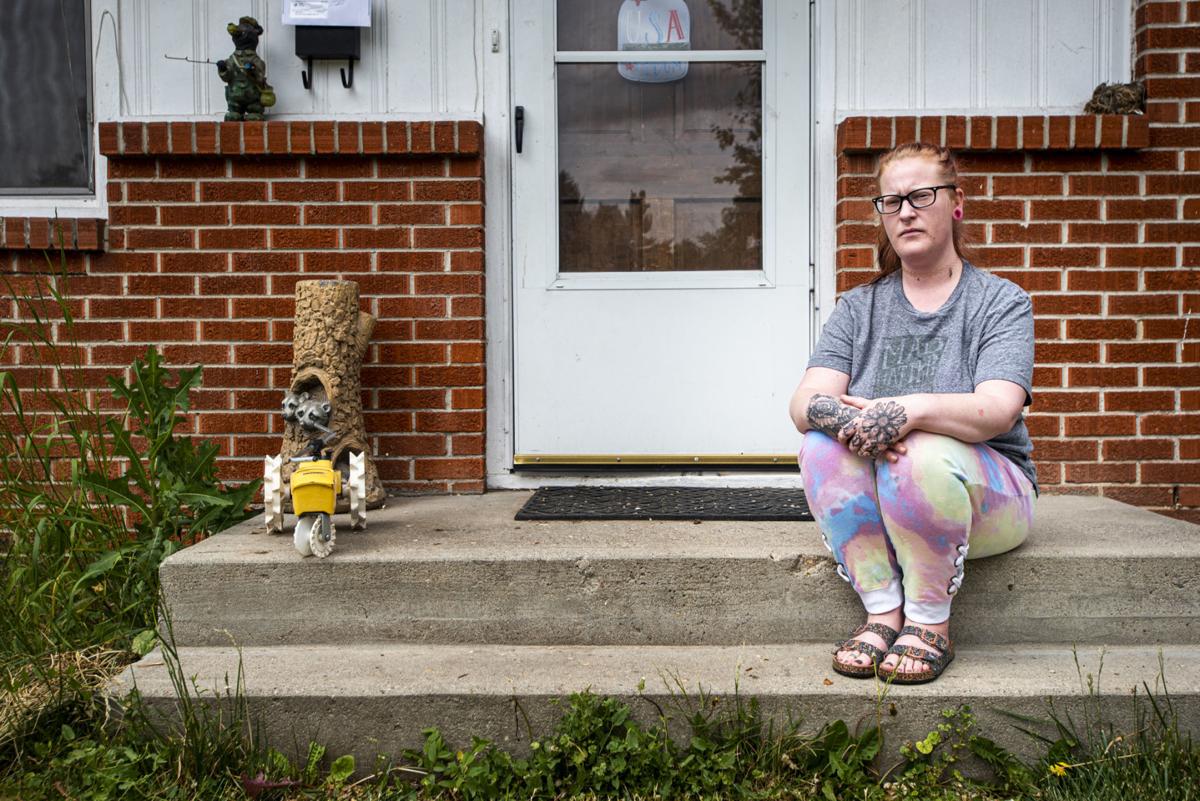 Rebecca Miller poses for a portrait on the front porch of her Boise home on Thursday, May 14, 2020. 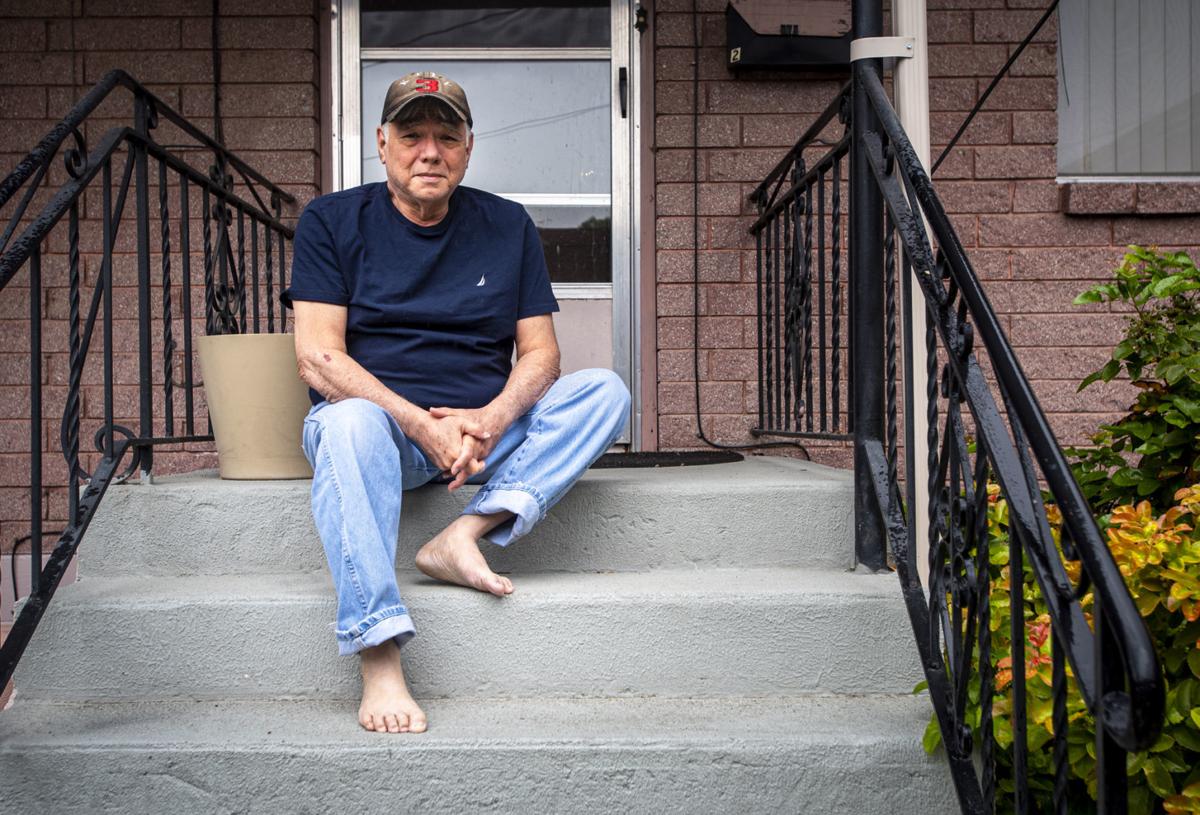 Mitchell Gonzales poses for a photo on the front steps of his Nampa home on Thursday, May 14, 2020.

Rebecca Miller poses for a portrait on the front porch of her Boise home on Thursday, May 14, 2020.

Mitchell Gonzales poses for a photo on the front steps of his Nampa home on Thursday, May 14, 2020.

Rebecca Miller had been sober for more than a year and was making progress paying off her court fees after she was arrested last year, but then the pandemic hit.

Since November, she had been working at a call center in Boise, preparing to have her first child and staying up to date with all of the requirements of her probation. The arrival of COVID-19 pushed her to take leave from work to avoid exposure for herself and two elderly people in her household.

To cover her expenses while she could not work, Miller, 30, applied for unemployment benefits at the end of March, but she is still waiting for a payment, or even a call, from the Idaho Department of Labor to resolve her claim. Two months of waiting for benefits, she is staring down a June deadline to find a new place to live after her parole officer wanted her to find a new living situation despite no way to pay.

“I haven’t been able to talk to a single person this entire time,” she said. “Everyone keeps saying, ‘Have patience, we’ll get to you.’”

Miller is one of thousands of Idahoans across the state navigating a gridlocked unemployment system struggling to keep up with the influx of claims. Although the Department of Labor says it has been making progress on outstanding claims by adding additional staff and paying out benefits to people in need across the state, going without two months of income due to the pandemic without any support is beginning to take a serious economic and emotional toll.

Miller estimates the state owes her $4,200 in back pay, which could easily help find her a new place to live and help her pay her supervision costs to comply with her parole. Without those funds to secure a place to live, she is concerned she could end up back behind bars because she could violate her parole. The $1,200 stimulus check helped her pay several months ahead on her restitution and court fees, but she is worried about still paying the roughly $250 she owes for her cost of supervision.

Laid-off workers have filed 131,101 unemployment claims since the pandemic hit Idaho in mid-March, which is more than double the number of claims filed for all of 2019. For the past six weeks, the number of new claims has been falling steadily, with only 5,795 new requests for benefits for the week ending May 9, which is a 23% decline from the previous week.

Idaho Department of Labor spokeswoman Leah Reeder could not provide an estimate of how many people are still waiting for benefits because of changes to the regulations due to COVID-19, but she acknowledged there are Idahoans who filed in the early days of the pandemic who are still waiting for help.

“Our goal is to pay everybody who should be receiving benefits,” she said. “It takes a lot of time and a lot of work, but we’re getting there. We’re getting closer.”

Reeder said the delay has been complicated by a number of factors, including not enough staff to answer the phones or people trained in the highly complicated area of unemployment benefit law. She also said it took several weeks for the state to receive the necessary guidance from the federal government on how to implement the newly expanded unemployment benefits that give payments to the self-employed and expanded benefits for those who ran out of benefits from being previously unemployed.

Between March 23 and May 9, the Idaho Department of Labor paid out nearly $200 million in both state and federally funded benefits to people across the state sidelined from their jobs by the public health crisis. People under 25 constitute 20% of the unemployment claims, with the bulk of those out of work coming from the food service and hospitality industries.

Low-income workers who have held multiple, low-paying jobs in recent years are more likely to have issues on their claims, Reeder said, which necessitates them to wait for a call back. These workers were more likely to be living paycheck-to-paycheck prior to the pandemic, leaving them most vulnerable to going two months without income.

One way the Department of Labor has tried to keep up with the demand is dedicating the hours of 3-6 p.m. for staff members to stop taking new calls and work through the backlog of issues by calling applicants back. Reeder said anyone who is waiting for benefits should make sure to have their voicemail set up and ready to accept messages and to pick up calls from unfamiliar numbers if they are waiting for information on a claim.

Daniel Sanchez, 50, of Twin Falls said his claim is complicated because he moved from working at a plywood company through a temp agency to working for the business full time, so his claim says he has a pending issue and he is waiting for a call from the state. His wife is taking on extra shifts at a food processing plant to help make up the difference, but he is worried if they don’t get some assistance soon he could fall so far behind on his expenses that he could lose his house or his car.

“I wish I was working so I didn’t have to beg the government to help,” he said. “I’ve called, I’ve waited on the phone for an hour and it hangs up countless times.”

The department’s phone lines are still bogged down with callers in need of help, but Reeder said the state has thrown more resources at the problem. Any Department of Labor staff with experience answering unemployment claims have been transferred back to help process claims. Receptionists have been trained to answer basic questions about unemployment benefits so they can answer phones, and the department is hiring people in small groups to be trained in a socially distanced setting. But they haven’t yet been able to help everyone immediately.

Gov. Brad Little said he “felt bad” about the long waits for unemployment, but pointed to other states experiencing issues around the country.

“We’re getting there, but we’re not getting there as fast as I would like to see it,” he said during a May 14 press conference. “We are behind, but so are almost all of the other states given the magnitude (of claims).”

The stress of waiting for payments has been crushing for Mitchell Gonzales, a laid-off employee of a flooring store in Meridian. He said business was already slow in the months leading up to the pandemic, but he was let go in March and has since been struggling to get benefits to help pay his rent and medical bills.

Without insurance or income and limited savings, he is unsure how he will be able to pay his June rent or buy more insulin. Gonzales, 65, hasn’t received his stimulus check and said he is unsure how to check the status of the payment.

“The stress has got me up all night,” he said. “I can’t sleep, but maybe two hours a night and I wake up worrying. I’m shaking all the time.”

For other community resources, call 211.