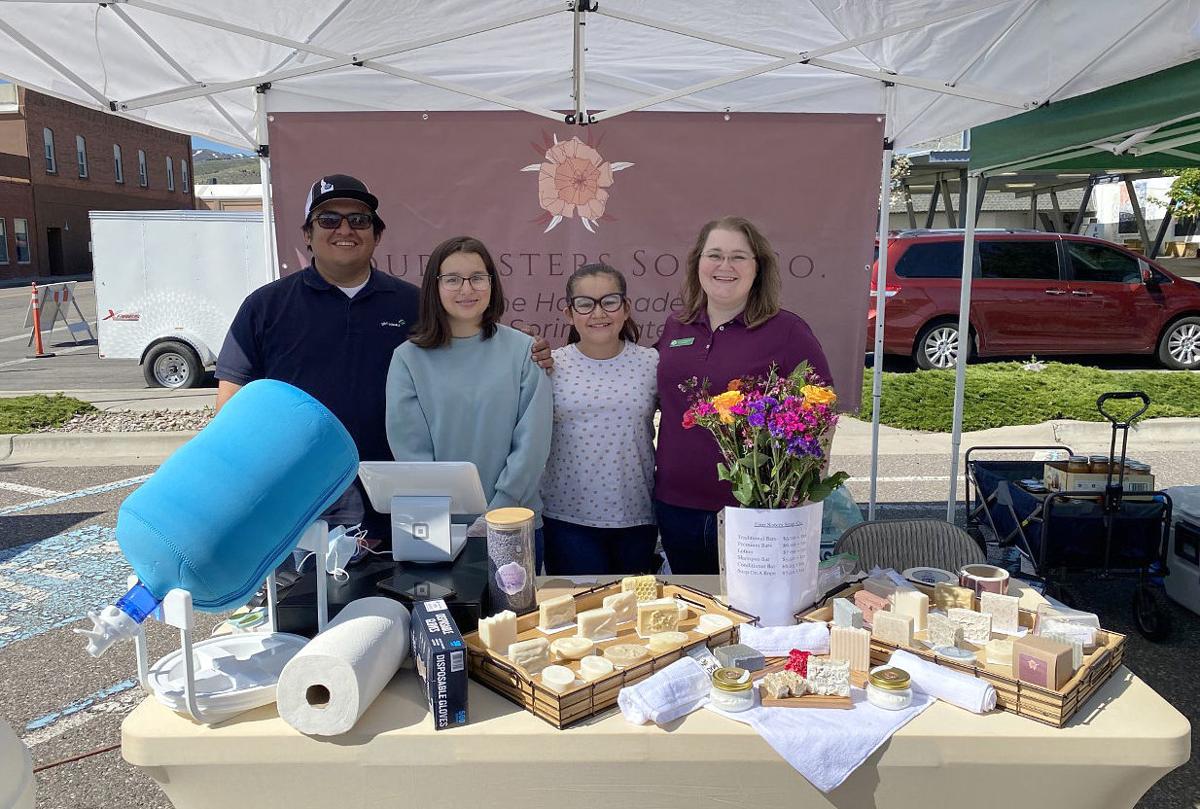 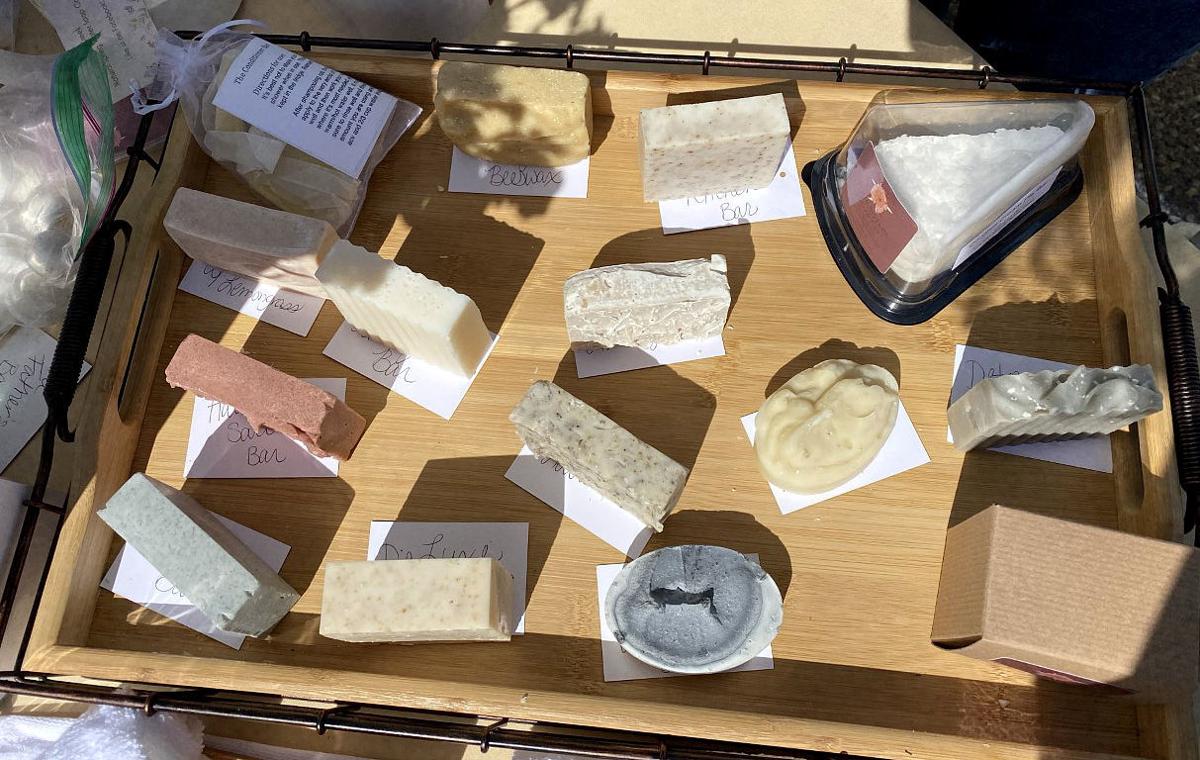 Some of the soaps for sale from Four Sisters Soap Co.

Some of the soaps for sale from Four Sisters Soap Co.

POCATELLO — Four local sisters are getting an early taste of entrepreneurship thanks to their new soap-making business, Four Sisters Soap Co.

The Mondragon sisters are Sandy, 14, Barbara, 12, Shelby, 4, and Jemma Rose, 2. Though the two oldest sisters are the ones who handle most of the business, it is without a doubt a whole family affair, with their parents, Autumn and Xavier Mondragon, and grandparents also helping out when needed.

The business started when Autumn put on a class to Sandy and Barbara’s local Girl Scout troop about soap making, which Barbara said was “really fun,” and they experimented with it after the class as well. After that, the girls’ parents surprised them by buying a local soap-making business at the beginning of March.

“My dad kind of joked, ‘What if this was a business for you guys?’ We said, ‘haha,’ but he wasn’t kidding because then he got the news that our family had just bought a soap company,” Barbara said.

The previous owner of the business helped the girls out in the beginning, giving them a lot of the supplies and teaching them how to make the soap, which is a cold process involving mixing oils and sodium hydroxide lye.

Thus the business, formerly known as Clear Creek Natural Spring Water Soap Co., was given a new life. To kick things off, Sandy and Barbara posted a video to the business’s Facebook page announcing them as the new owners. Since then, the business has consistently had orders to fill.

“We started getting some orders after we made the video saying we’re ready for orders,” Barbara said. “It was going a little slow at first but the more we started posting about how we’re making new soaps and all these things, we started getting more and more orders. It’s a pretty consistent flow of orders we get now.”

In fact, business has been so good that they’ve had to buy more soap racks to store all the soap.

“We bought a little rack to store the soaps on while they cure and we ran out of room,” Autumn said.

According to Sandy, the girls “went all out” when it came to buying equipment and supplies.

“We bought a lot of things that the previous owners didn’t have,” Barbara said. “We bought the soap rack and new packaging and a new table set-up.”

Barbara said that at first she was scared to work with lye — a highly caustic substance that can cause chemical burns — but being around it consistently now has made her more comfortable with it.

“It was really scary,” she said. “You work with lye and that is a poisonous, toxic ingredient that will burn you if it touches your skin and make you blind. … It just sounded so scary and I was like, ‘I don’t know how I’m going to do this. I’m so worried that I’m going to be so nervous about hurting myself that I’m going to mess the soap up.’ But it wasn’t that bad. Just wear gloves and lab coats and goggles, and you’re safe. You’re good to go.”

On the first day, they started out with one scent — “Sandy’s Spearmint” — that has consistently been the business’s best seller. Now, the two youngest girls also have soaps named after them — Shelby’s Sunshine Bar and Jemma Rose Bar — and Autumn said they’re working on a “Bubbly Barbara” scent as well.

Autumn said there are a few things that set their business apart from other soap makers: They don’t use palm oil because of its negative impact on the environment, and they use all-natural ingredients, without artificial colors or fragrances. Additionally, they make their soap in small batches — only 10 to 12 bars in each batch.

Sandy and Barbara said their experience selling Girl Scout Cookies gave them the entrepreneurial edge they needed to start their own business. Autumn said the girls have consistently been among the best sellers in their troop, selling at least a thousand boxes.

“They had a lot of experience with direct person-to-person sales,” Autumn said.

Barbara added, “We are confident in talking to people and we’re not nervous to have interactions with people and sell things. We know how to deal with money.”

In addition to their skills in selling cookies, there was another thing that made it easier to start the business: the coronavirus outbreak.

While most other businesses have been struggling, the Mondragon family says it would have been nigh impossible to get the business off the ground if the girls had been in school and busy with extracurricular activities. So for them, the outbreak has been a blessing.

“It’s allowed us to have the time to put into the business, all of us together, because we’re all at home together,” Autumn said.

But the girls say they have the hang of it now, and they’re not worried about not having enough time for their business once everything gets back to normal.

“We needed time to get the hang of it,” Autumn said. “In the beginning, there were a few disasters. … There was a learning curve, and I think if we’d had that many mistakes and had a full school schedule and their full after-school programs, we may have just given up. It would have been so overwhelming, we probably would have just waited until summer.”

“I think it used to take us a very long time to measure out the oils we were using and the lye and the water, but now it’s quick,” Barbara said. “We understand how to do it. We’re not worried about messing something up super severely because we can always make more.”

Sandy and Barbara have big plans on how to spend their money. Sandy will use it to help pay for her tuition to Grace Lutheran High School. Barbara plans to use her share to pay for braces and ballet classes at Alliance Academy of Dance.

“We wanted them to have a way to earn and pay for the things that they wanted to do that we may not be able to cover for them,” Autumn said.

In addition to selling their wares online, the Mondragon girls plan to be at the Portneuf Valley Farmers Market all summer. The market is now open Saturdays from 9 a.m. to 1 p.m. at the Old Town Pocatello Pavilion. They’ve also put in an application to have a booth at the Eastern Idaho State Fair in Blackfoot.

“We are trying to get out there as much as possible because my sister and I have expensive goals we’re trying to meet,” Barbara said.

The girls say the business really involves their entire family, and that makes a big difference.

“Since we’re a family and not just a business, I feel like we’re not super scared to be like, ‘Oh, shoot, I messed this soap up,’” Barbara said. “We’ll just be like, ‘I’m sorry, guys. I messed this soap up. I’m going to start over.’ I feel like we have a sense of security in each other and we’re not nervous to do anything because we know we have a family who’s going to back us up and support us.”

“It’s really a whole family thing,” Autumn said. “My parents are watching our little ones while we’re at the market, so we don’t have to try to corral the little ones. My dad has helped make some cutting blocks for us so that our bars can be more uniform, and he helped us design and make some custom soap trays to rest the soap on.”

Barbara added, “That’s really helpful so we don’t have to worry about what’s going on with the little ones while we’re trying to make this business work.”